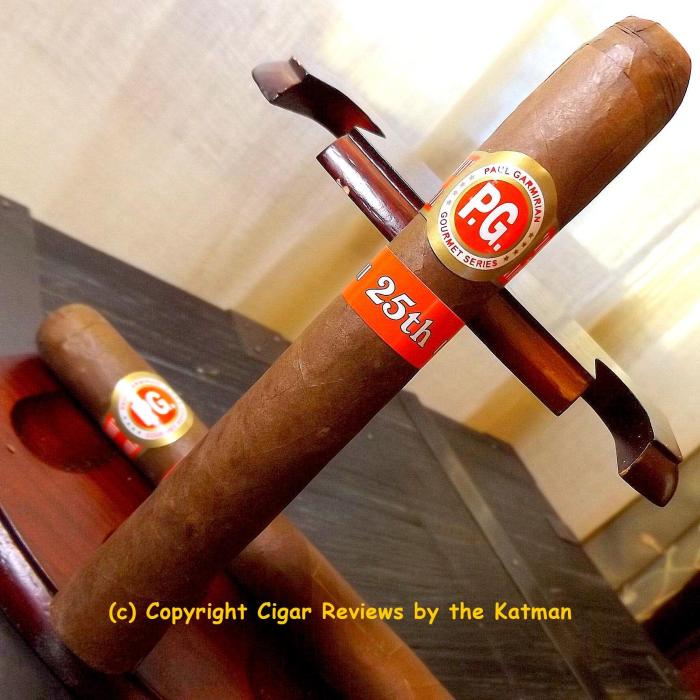 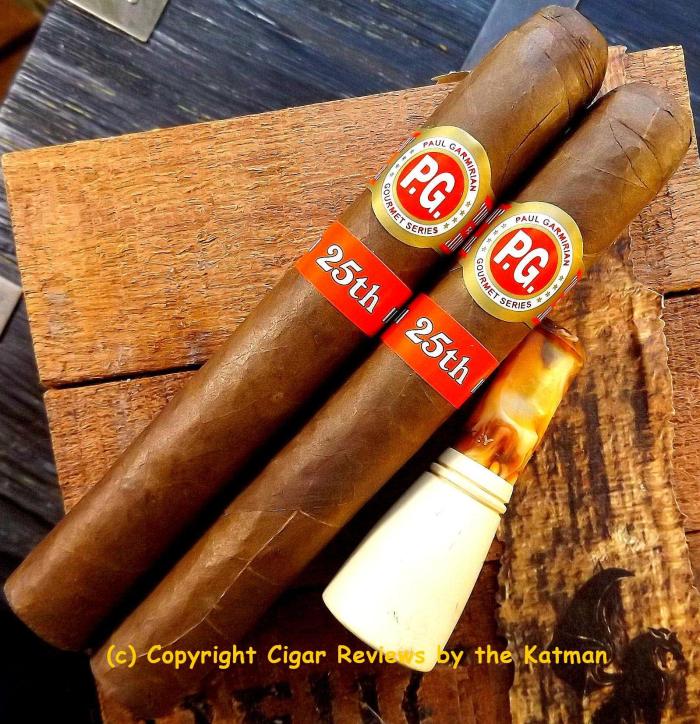 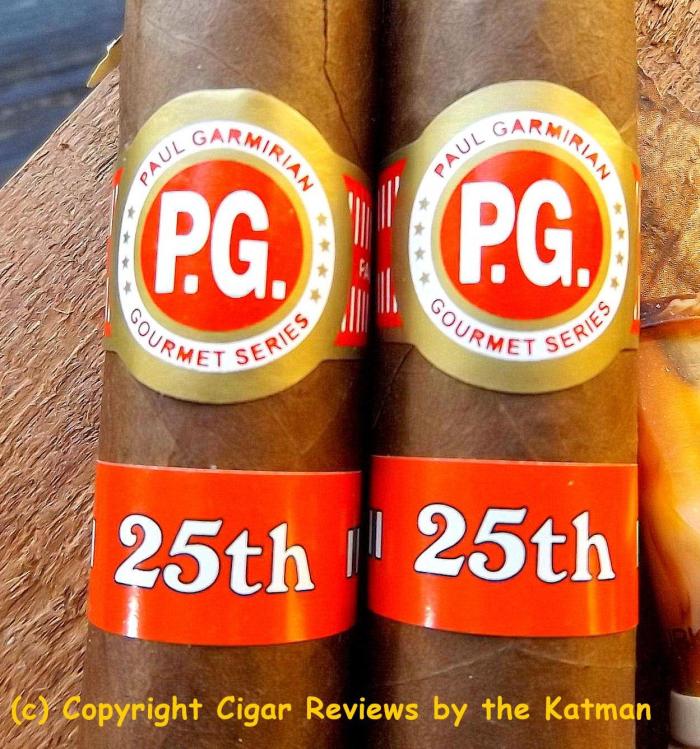 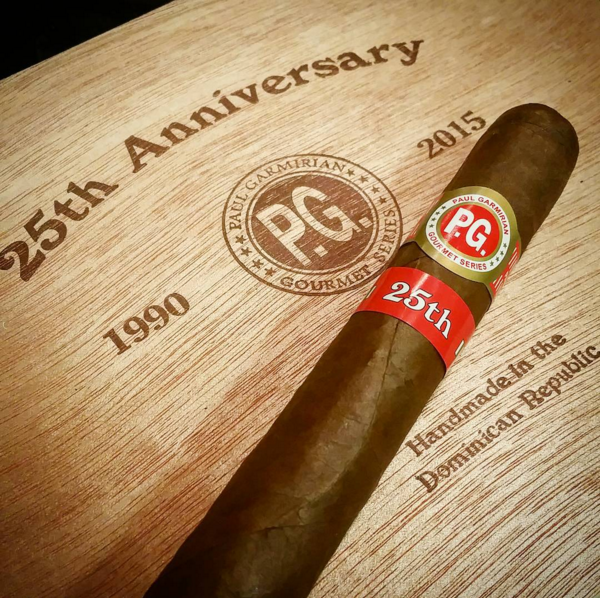 Today we take a look at the Paul Garmirian 25th Anniversary Connoisseur.
After battling the flu for 2-1/2 weeks, I feel invigorated and hence the deluge of reviews this week. 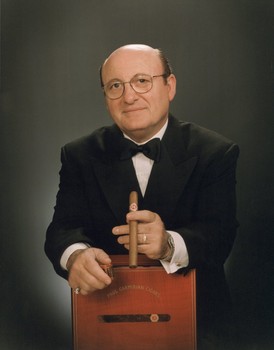 According to Halfwheel.com web site:
“As has become common in this business, when an anniversary is celebrated, there is a cigar to go along with it. That happened in 2005 with the Paul Garmirian 15th Anniversary—a 10-vitola line—and in 2010 with the 20th Anniversary, which included eight different cigars rolled over various years.
“For 2015 and its 25th anniversary, the company released another anniversary cigar, but in a bit different fashion. It was limited to just a single release in the company’s 6 x 52 toro size known as Connoisseur.
1. PG 25th took over 2 years to develop
2. Fully fermented wrapper
“For us, this is more than just another cigar. It was something in between our lines that was missing. We made hints and suggestions, graphs and charts, and the artists in the Dominican nodded silently. We waited until all the stars were aligned. This particular wrapper needed an extra 9 months of fermentation.

“Even that description describes much of what I’ve come to appreciate about Paul Garmirian’s cigars. Production is relatively limited, methodical and aged. The company has a unique habit of releasing handfuls of boxes with dates from the 1990s written on them. It’s a great way for those of us who struggle with aging full boxes for decades or those who simply weren’t able to buy PG Cigars in 1997.

Online stores that carry this cigar: Atlantic, McLean Cigars, and you can Google for more sites. And all seem to sell it for $2 less than MSRP: $17.00.

DESCRIPTION:
I use an accurate method for measuring ring gauges and it came out as a 54 rather than a 52.
Nice looking cigar but not without its flaws. Discoloration of the wrapper, some big veins, and the caps are not consistent with one being flawless and one very sloppy.
Seams are tight. The wrapper is an oily russet brown.
One cigar’s flawless cap makes it impossible to count them but the sloppy one clearly shows a triple cap.
It wears the standard PG cigar band with a secondary band with “25th” written on it.

FIRST THIRD:
Right out of the pocket, I get a power blast of red pepper. Plus a large dose of malts, creaminess, graham cracker, cedar, roasted nuts, and a touch of chocolate.
The draw is a bit airy but not an impediment.
Strength is medium body.
And a slow smoker.

I have to be honest. I don’t understand the ridiculous price points coming down the chute each year. $20 is about to become the norm in a year or two.

I spoke to Paul Stulac yesterday and laughed about when his cigars came out, they were expensive at $12 a stick for his premier line. Now he has lowered his prices and just try and find a decent cigar under $12.00. Of course, you can shop at the big online stores which seem to sell mostly drek. I got a catalog the other day and it’s the same shit every time one comes out. Catalogs are aimed at those who don’t seem to have a serious palate. I know. I’m an arrogant SOB.

Hence, the big draw to boutique brands and the high prices that comes with them. 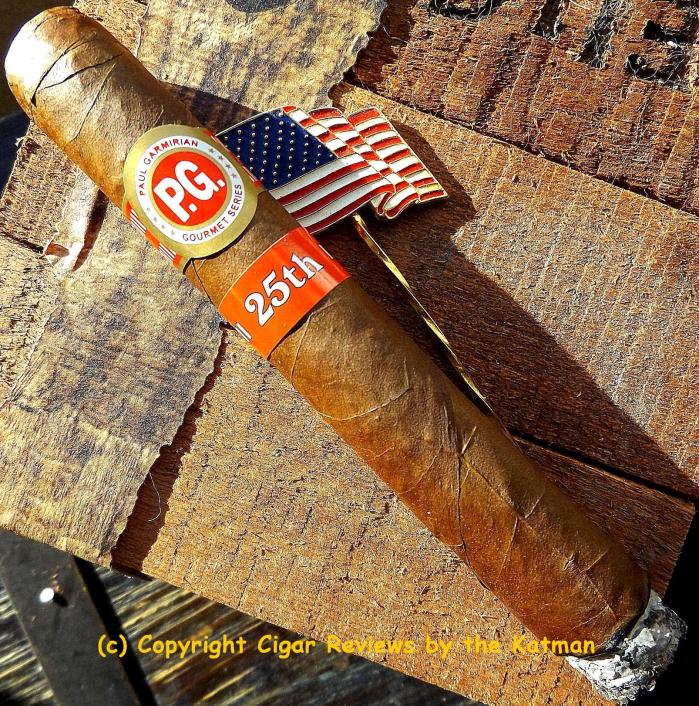 And with only ¾” burned, like a light switch was turned on….complexity hits hard. The balance is on the right journey. The finish is long and sweet.
The char line should be behaving better.

The bakery flavors, plus malts, are the predominant flavors….pie crust, lots of butter, salt, nuts, and a sweet/savory thing going on. Reminds me of an English meat pie. Ever eat a kidney pie before? Don’t. They sell this crap on the streets of London and the pubs like they were giving away free drugs. Horrible food. But the Scottish Egg is the absolute worst. A hardboiled egg covered in that horrible stuff the Brits call sausage that is only half meat and I don’t have the slightest idea what the other crap in the mix is but it is godawful no matter how hungry you are.

I’m disappointed with the burn line. It is wavy and needs lots of small touch ups. A $19 cigar should have been rolled much better.
Don’t get me wrong. A very good cigar. But then I just reviewed the Bespoke Grand Café and it was flawless with flawless construction. Not a single touch up was needed and it was $14…not $19. I can’t believe I’m comparing $14 to $19.
I believe that Halfwheel’s rating of 90 is much closer to planet earth than the other reviewers who gave it a 100. 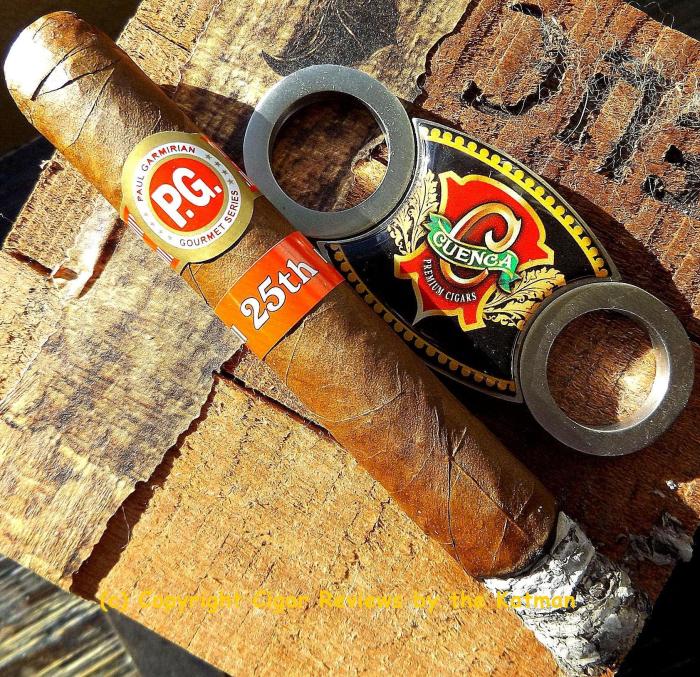 Had to get up and change to CD No. 2 of the live Led Zep concert from 1972. 3 disc set.
Hard to review without music.
Strength hits medium/full body.

Now I’ve had these two cigars for at least a month if not longer. And I believe that they had some serious humidor time before I got them.

I have trouble keeping track. When I get a care package, I go into this frenzy of ecstasy that makes me forget everything about documenting its existence and this is why I am derelict in keeping track of my dear readers that give me cigars.

The char line, finally, is on the road to riches and diamond rings.
There is a deep richness that contributes to the complexity. Flavors morph. No specific flavor really stands out amongst the rest.
The Paul Garmirian 25th Anniversary Connoisseur is a very smoky cigar. Each puff swarms the dining room with billows of white clouds.

Now that’s a crazy bunch of mixed up flavors. For those detractors that don’t believe I taste all that…read a Cigar Aficionado lately? The flavors they come up with baffle even me. Fig paste? Cocoa nib? Peanut shavings? Chestnuts? Maple candy? And toasted marshmallow?

The Paul Garmirian 25th Anniversary Connoisseur really takes off now. A new flavor: Peanuts; enters the arena. LOL. And it urges on the fruitiness and bread-like qualities to taste like a PB&J sandwich. 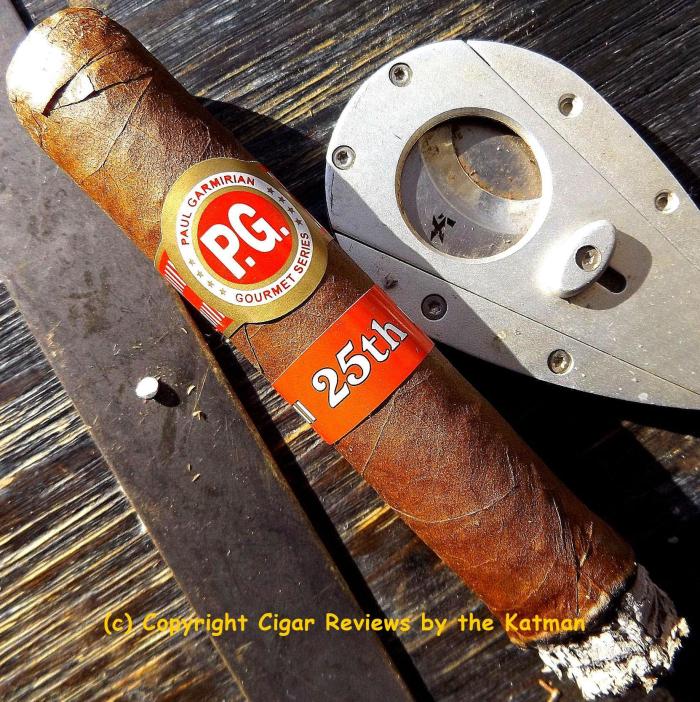 The human palate is a wonderful and mysterious thing. No two are alike. The only way to develop the palate is through constant analysis and focus each time you light a cigar.

The Paul Garmirian 25th Anniversary Connoisseur is now a phenomenal flavor bomb. And now I waver between Halfwheel’s rating and the other reviewers who gave it a perfect 100.

Here is something no other reviewer will admit. Everyone wants to be the first to review a new cigar. Why? Ego. And bragging rights. I am no different. Long ago and far away, I did the same thing. Smoked good cigars too soon. I didn’t want to be the last reviewer to write about a new cigar.

And most of the big reviewers, while getting free cigars from the manufacturers prior to release, still don’t allow the proper time to age the blend. Everyone misses the blender’s intent. This, of course, is a disservice to the blender.

I haven’t reviewed a new cigar in quite a while. I don’t buy cigars. I am totally dependent on the good hearts of my readers. Now and again, I do get new cigars. But most of the time, I get cigars that have been in my reader’s humidor for some time and then sent on to me. So sure, I’m late to the party. But I get to review and report what the blender wanted you to taste.

I don’t know how long it’s been but I started the regimen of making the manufacturer wait a couple months before I reviewed the samples sent to me. Yeah, it made them impatient but all was forgiven when their cigars got great reviews.

This is the other reason I taste so many flavors. You know this. There is a small window of opportunity to catch a cigar at its pinnacle while you are humidor aging it. Too soon and you miss out on everything. Too much aging and you taste only the shell of what it once was.

Very few cigar brands/blends survive the test of time. I know this because I’ve been sent cigars by readers with years of humidor time and they lost most of the blender’s intent. And are no longer reviewable. Good for smoking, sure. But past their expiration date. It is an urban myth that every cigar aged for a couple of years gets better with time. My guess is that only 10% of cigars out there do well under those circumstances. 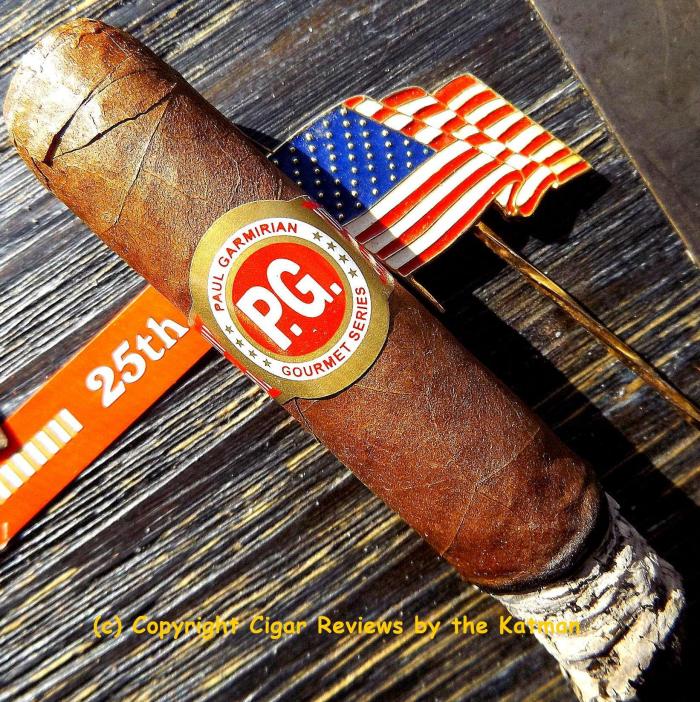 The Paul Garmirian 25th Anniversary Connoisseur is definitely designed for the connoisseur’s palate. But newbies will dig it too as long as they can handle strong cigars.

Flavors are bold. Impossible to miss.

The more I smoke, the higher the rating becomes. It is deserving of a rating higher than 90. What it will be? No idea as halfway is not positive evidence of the final outcome.

“Moby Dick” from Zep is playing with the long drum solo. I remember so well that in this concert, and just about every other concert I went to in the 60’s and 70’s, the obligatory drum solo was an excuse to go use the bathroom or buy a beer.
The only drum solo I ever witnessed, in which no one left the arena, was the drum solo in “In-A-Gadda-Da-Vida” by Iron Butterfly. 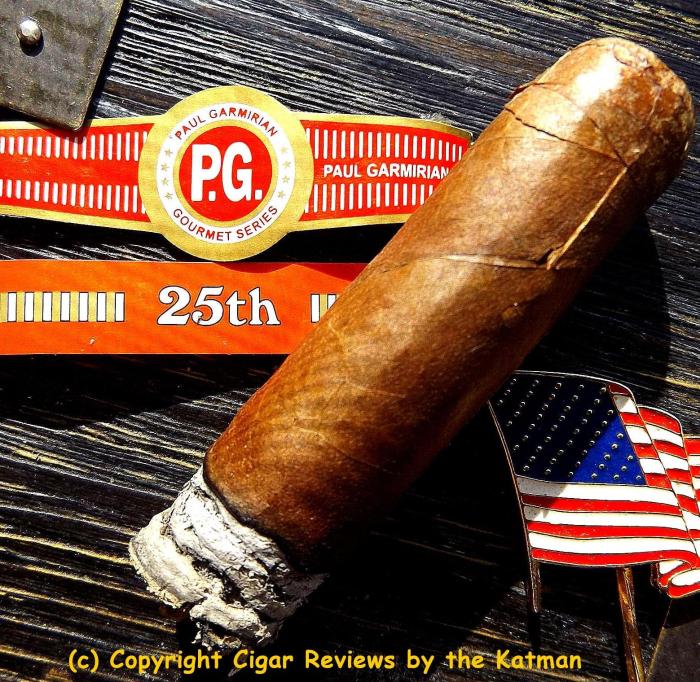 LAST THIRD:
Smoke time is one hour 25 minutes.
Strength is full body.
This is a languid experience. Slow roll.

The price point. Ouch. While the MSRP is $19, they can be had for $17 online. Still, a very expensive cigar. But a much better deal than the fancy Padrons whose price points are ridiculous. I’ve yet to smoke an Anniversary cigar worth the dough.

So, in those terms, is the Paul Garmirian 25th Anniversary Connoisseur worth $17? It is way out of my price affordability. But then all Garmirian cigars are expensive. I have an Artisan’s Selection by Paul Garmirian Cigars that goes for under $7.00. It is their line of cigars that are cost effective. I have a couple and will review it soon.
The char line remains wavy but no touch ups required. 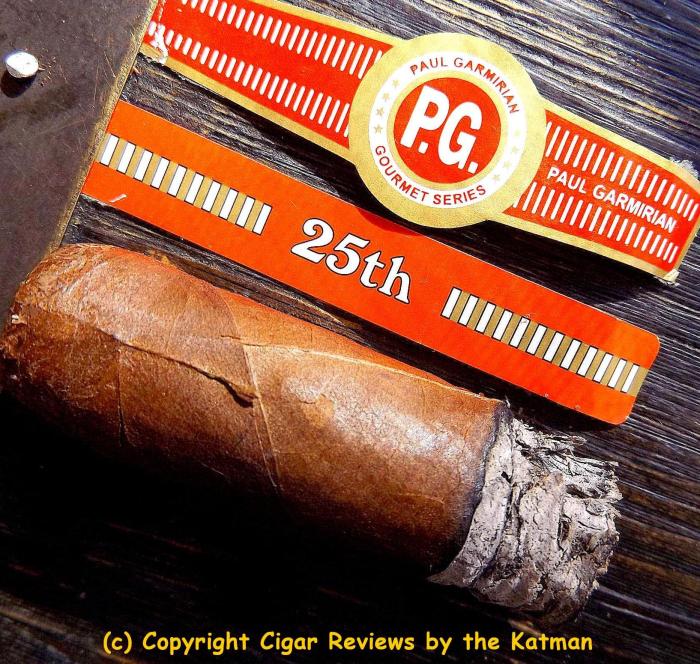 The Paul Garmirian 25th Anniversary Connoisseur is now near perfect. I take a look at my Top 25 Cigars of 2015 and don’t really find a cigar this good in all those great cigars.

The Paul Garmirian 25th Anniversary Connoisseur shares the stage with the Bespoke Grand Café in terms of perfection. As the Garmirian cigar was released in 2015, I am going to amend my list and it will settle in at No.1. The Bespoke may take that position in my 2016 list.

While the Dunbarton and Trust Sobremesa is a great cigar, it is not as good as this cigar.
Now I have the torturous duty to bump a cigar off the 2015 list.
Done.

How lucky am I? Two great cigar reviews in a row. This never happens.
For those wondering when I am going to review a cigar that you can afford….next review.
The Paul Garmirian 25th Anniversary Connoisseur ends beautifully without heat or bitterness. Cook as a cuke.

If you can, find the dough in your wallet, I seriously suggest you buy one or two of these cigars. But give it time in your humidor. $17 is too much to go into the toilet if you smoke it too soon.
Brava Paul Garmirian. 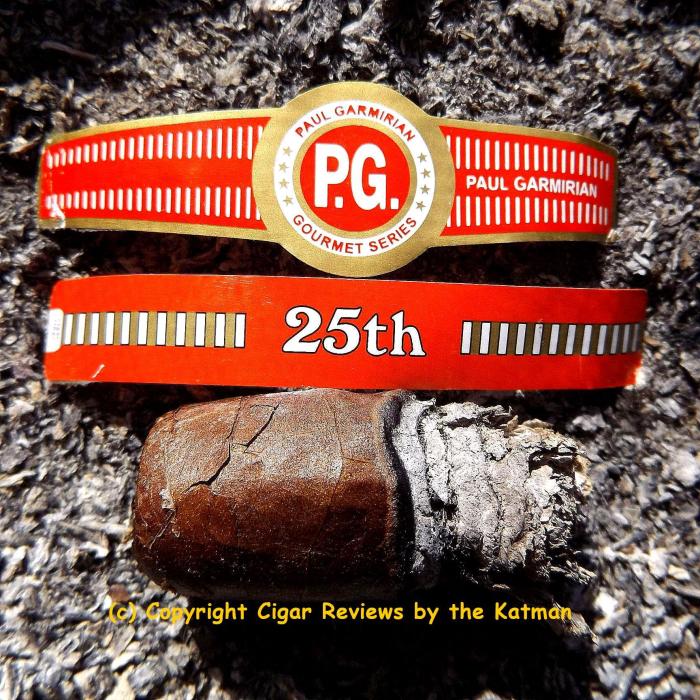