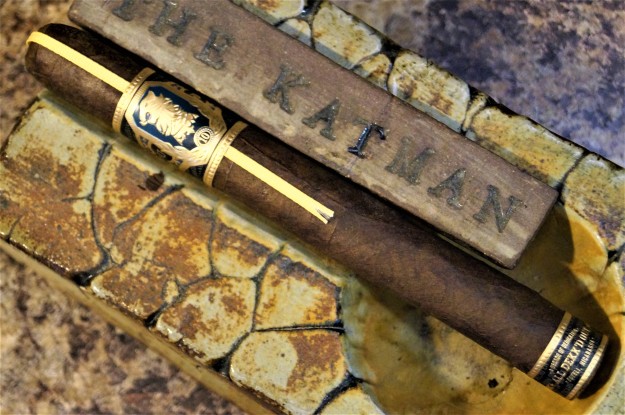 BACKGROUND:
From Atlantic Cigar Co:
“Twenty twenty-one marks the 10th anniversary for the Undercrown brand, originally launching in 2011. In celebration Drew Estate has launched the Liga Undercrown 10, showcasing an ultra-premium blend on par with Liga Privada line. The Liga Undercrown 10 consists of a Mexican San Andrés dark wrapper, harvested from the highest priming available. This is joined by a broadleaf binder from the Connecticut River Valley and an all-Nicaraguan filler. For comparison, the traditional Undercrown Maduro uses a San Andrés wrapper, Connecticut Habano binder, and fillers of Nicaraguan Habano and Brazilian Mata Fina. Delivering smoker’s an experience of Mexican hot chocolate…naturally sweet with hints of raisin and cacao & waves of intense black pepper, along with notes of sun-dried cherries, espresso, woodiness and earthiness.”

APPEARANCE:
Quite the impressive presentation. All ready for the Easter basket and nowhere to go. Big honker. The weight feels right in my hand. Not a heavy cigar so I don’t expect to see this becoming a 2.5-3-hour smoke time. Probably 2 hours. The oily wrapper is full of tooth and pretty solid. Although, I do feel a couple soft spots. Veins disappear into the 10-40 oil hue and while the seams are tight, they are clearly visible. The cigar band, the footer band, and the graduation ribbon make for a stunning appearance.

No need for my PerfecDraw draw resistance tool on this stick. The draw is spot on just the way daddy likes it.

There is an additional generic sweetness that wraps this Gordita into a nice contrast of savory v. sweetness.
Complexity kicks in pretty quickly.

Despite the enjoyable Mexican feast at my disposal, the main characteristics are that of a million other blends with the same leaf stats. Purty good but not surprising.

The burn is very slow and deliberate.

Transitions begin with only 1” given to the gods. The black pepper, ancho chile, and spicy cinnamon alerts my palate to keep its guard up. I expect the onslaught will calm way down by mid-point.
I taste peanuts in a candy coating.

Strength is medium/full from the start.
Burn is a little wonky.

This is not a light and airy stick. Flavors are very heavy; almost plodding. Intensity kicks in and my palate thinks it is smoking a ship’s anchor. A slightly metallic aftertaste.

The creaminess is gone but sorely needs this missing component. Who doesn’t like an ice cream cone after a spicy Mexican meal?

The savory and sweetness factions take turns between puffs.

I like the cigar. Flavors do some flip flopping, but I believe that will be worked out with many more months of humidor time.

Back in high school, there was a guy hanging in front of my best friend’s house. There was a fire hydrant near the curb. Last thing we heard was, “Watch this!” Next thing we knew was that our friend had tried to stand on top of the metal disburser of water and in doing so, slipped and fell hard on his testicles with all his weight. He slid off and shimmied to the ground. Moments later, the projectile vomiting started. As far as I know, the guy never had kids.

Comprehensive flavors find a new gear. The fruitiness of peach, black cherries, and raisins are in the driver’s seat. The spiciness begins to kick back allowing the more subtle nuances to shine. The complexity is building as is the over all character of the leaves slogging away together.

I researched the shit out of this stick…and no info just how limited this cigar may be. Could it be regular production? Dunno.

The blend makes a big leap with 2” burned. The complexity deepens. Flavors spread out providing a hint of all previously described elements. It might even become a flavor bomb. 5” to go to see if my prediction is valid.

The strength seems comfortable at medium/full.

I like the Undercrown series but am partial to the Sun Grown blend.
Chocolate and assorted nuts take the lead. It might signal a platform in which the speed of the transitions will accelerate.

SECOND THIRD:
Took only 30 minutes to get here.
The cigar makes its move creating a deeper recycling of flavors which ups the ante on the complexity.

There is no stopping the blend now. Very rich and lavish.

The original UC Maduro is very different than this upgrade. Not a bad cigar but this blend opens the imagination to a set of flavors that whizz by before my palate can capture them.

The wonkiness of the burn has ceded to a nice even char line.

I bought two sticks from Atlantic Cigar. I now wish I had bought more. A box would be good.

I do a short search and the usual suspect of online stores do not carry the cigar. It must be a very limited stick. So, time is of the essence if you choose to try one.

Strength hits full tilt as I begin to approach the halfway point.
The spiciness relents. Flavors begin to coagulate. It won’t be a flavor bomb.
Not a stick for newbies. Sophisticates will dig it.

The cigar now oozes smoothness…which enhances the richness.
Nicotine arrives. I don my 3-D glasses so I can continue to see the page.

The halfway point is upon me. The mole struts its stuff. Chocolate and various peppers make me hungry.

I remove the main cigar band which turns out to be one layered on top of the other. The smaller one says Thank You. The main band has a Drew Estate manifesto across the entire inside. As most of my vision is gone, the gnat sized letters jumble into what looks like Arabic writing. Even with my readers on, I can’t make it out. Thank you, nicotine poisoning…and old age.

The blend is now playing stride piano while the sum of its parts become the big attraction.

This is a really strong cigar. I stare at the cigar in the ashtray and its length seems to have grown back. This will make it very hard to nub as the strength is becoming nuclear.

But it tastes so good that I am on a mission to finish it down to the last vestiges of tobacco detritus.

The stick’s complexity runs amok now that I take a couple minutes between puffs. If you suck on this cigar like a twist of licorice in your mouth, you will die.

DE must have really taken their time on this blend. The leaf stats would have you believe you’ve been here many times. But the flavor profile is much more intense than what I had expected.

There is no mention of the aging of the tobacco. Something in this snausage is yelling for the blend to row faster in attack mode.

LAST THIRD:
Smoke time has been an hour and 15 minutes.
I now have clusters of hair on my knuckles.
This cigar will take all the testosterone I have left in my feeble system in order to finish it.

I drop to the ground and do a dozen burpees to keep my heart working. Holy crap…the strength has surpassed full tilt and is now in Chernobyl mode.

Flavors meld into one giant burrito.

I don’t think I was cut out for this. The strength is a planet killer.
I haven’t smoked a cigar this potent for quite a while.

Herf this cigar with your friends and at one point, discussion will hit the off button. Slack jaws and drooling will follow.
I admire smokers that can smoke a stick of dynamite and ask for more. I’m not one of them.

I’m not sure if extra extended humi time will allow the strength to settle into something a bit more tolerable. But if I had waited, the cigar will no longer be around.

I also could find no reviews…except for a couple video versions.

Do you like having balls? This cigar will turn them into mush.
Two months of humidor time provides lots of flavors, but the strength cannot be tamed.

The cigar goes out while I sit here and slobber.

I light ‘er up again and a tsunami of intensity hits the soft parts of my brain like a sledgehammer.

I have 1-1/2” to go but I doubt I can go any further. I am swooning.
Medium/full is my favorite strength. Once they venture into the devil’s territory, I raise my hands and give up.

If you are anything like me, you will need to really age these cigars. Do you have the patience?

I’m bailing so I can walk.
This cigar would have scored higher if not for the kitten killing strength.