Free Will ~ Cigar Page Exclusive | Cigar Reviews by the Katman 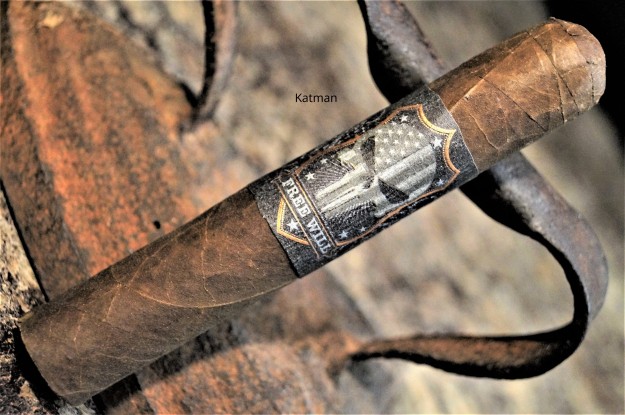 I bought these cigars on a whim several months ago. I tried one with a couple weeks of naked humidor time and my response was, “Huh…not bad.”
I have high hopes.

BACKGROUND:
These cigars are made at the Oliva Factory.
There is a lot of information on the Cigar Page website about the production of these cigars.

“Free Will is rolled with a special Nicaraguan-grown, ‘Center Cut’ Condega leaf that’s harvested at the end of the season.
“Once picked they enter curing barns. Once cured, they move to fermentation. The first fermentation leads to sortation by Seco, Viso, and Ligero classifications, and it is the texture that drives this classification. Next, all leaves are organized by texture and separated where they continue fermentation together with like textures in order to continue processing at the same rate. Heavier Ligero leaves will take longer vs. thinner Seco and as a rule of thumb, Ligeros have more strength and character largely driven by sun exposure. In general, nicotine = strength and sugar = flavor. Sugar concentrations are always highest in the middle of the plant (centro fino) regardless of the time of year or other factors (driven by root). Nicotine on the other hand is always highest at the top of the plant, although it varies throughout the growing season based on external factors (namely, sun exposure). Free Will cigars capture both the highest sugar and nicotine concentrations by isolating not just those particular leaves, but the particular part of those leaves.

“The growing season is December to May – with planting done at various times over the 6-month period. From start to finish there is a 30% variance in the amount of sun light. Hence the ‘late harvest’ in May enjoys significantly more sun hours as the season progressed. The centro fino yields the thickest texture of the season based on the extra sun exposure, which in turn produces leaves containing max sugar and nicotine to produce a cigar rich in flavor, depth, body, and overall strength.

“To give you an idea of how limited it is, this cut represents just 0.8% of Oliva’s total filler harvest annually, meaning a max production of just 125,000 cigars per year. The end result is a higher level of nuanced intensity which doesn’t overpower the palate. Complex, deep, rich flavors…”

THE WHOLE MEGILLAH:
A very encouraging start…very nutty, lots of maltiness, dark cocoa, creamy, vanilla notes, cedar, and something sweet that, at this early juncture, is unidentifiable.

The draw is just how Poppy likes it. I had my PerfecDraw draw adjustment tool at the ready…I carefully lay it in its manger of sheep’s wool and Brillo pads.

A good cigar must start with a bang to get my attention. Unfortunately, a lot of cigars will explode like the first time you had sex…and then get loosey goosey afterwards.

Strength hits medium on the nose.

Spiciness appears with a nice flow of black pepper that aligns perfectly with other flavors…not too strong…just as Goldilocks likes it. That bitch must be 140 years old by now…she must have found out that bears don’t breed with blondes.

Here’s the trick…this is, so far, a great knockaround stick that has qualities like a much higher price point stick possesses. I also adore that they stick is in 5 different sizes. Just right. Goldilocks is humping my leg…at least she’s warm to the touch.

While not a heavy stick, the burn is slow as she goes. The char line is dead nuts perfect.

I’m getting that creamy, chewy nougat as described by CP. I can’t decide if it is akin to a Three Musketeers (Because of the chocolate influence), or a Snickers as I now get the peanut inflection. Hard to believe that an online cigar store is straightforward about the flavors…instead of blowing them all out of proportion. I tip my hat to CP.

With 1” burned, complexity plants its flag and claims this territory for the Queen of Ferretstan. The depth begins to expand the way you used to wake up in the morning when you were 18. Pup tents galore. I used a Playboy to smack it down.

Not a flavor bomb. A very nuanced blend. Smooth and balanced perfectly. For $5. You gotta be kidding me. CP was totally right on in writing a manifesto on their Free Will page telling the consumer how intense the blending of this cigar was accomplished.

Poifect construction…like me from my ankles down.

Three months of humi time cooked the shit out of this baby. The stew is ready for consumption. Smoke ‘em when you get them and you’re a schmuck for wasting a cigar.

I am now considering bypassing the fiver and snagging a box of 20. At $5-$6 per stick, this is a no brainer…Oh shit…wrong thing to say after a stroke. I take it back.

The flavors change up like the American League in baseball. Every inch stands up, pulls its Depends down, and screams, “Are you paying attention to the subtle changes or not?”
I am. I am impressed.

At 1-1/2” burned, strength is upped to medium/full. It has taken 20 minutes to get here. And exactly where is here? I don’t know…I had a stroke on Wednesday. I may apply for an Emotional Support Parrot. At least you can have a conversation with them. Dogs just lick your balls…which is nice too.

Lawdy Miss Clawdy. The complex direction this cigar is moving into is every bit as good as an excellent $12 stick.

The ash refuses to disembark. Unlike Kevin McCarthy. “One more time, please?”

The creamy, nougaty, chocolate candy bar is going bat shit crazy on my palate. There used to be a candy bar called U-NO. A chocolate covered nougat bar that drove me crazy as a kid. I used that defense when I lit the school bully on fire. He’s OK now. He has his own ice cream truck.

Oh…acid flashback. In the early 70’s, we found a drummer who happened to drive an ice cream truck. A cool guy that sold, and gave away, ice cream to the kids…and sold weed to the parents. No shit, that really happened. He was making a fortune selling cannabis and gave away lots of ice cream to kids that didn’t have the dough. We lost him when he was later arrested.

Transitions are on cruise control. But the finish…I get a nice hoppy malty flavor that makes me drunk with happiness. Actually, I’m not into being happy. I’d rather be sullen and in despair. I’m a Jew. It’s what we do.

I’m not kidding, men…this baby is a real winner. Or is that a wiener? Interchangeable words confuse me. Like bogus or bung hole. I don’t see the difference.

This Robusto is taking its time as it imparts a gopher hole full of delicious flavors that that will not surrender to the enemy.

Savory notes come from the peanuts, malt, toasted leather on a stick.

There is something else…toasted sourdough bread slathered with unsalted butter. It completes the Savory v. Sweet balance the blend needed.

If I had blind tasted smoked this cigar, I’d give it a high rating and guess it was a new $15 stick. No shit.

I’m going to listen to Cigar Page a lot more now. They have a few other new exclusive blends I’m going to snag.

At the halfway point, the cigar morphs into the flavor bomb I didn’t expect. Wow, Dr. Kildare. Dr. Marcus Welby will do.

The sweet spot is running on all 6 cylinders. My slant engine of a palate is revving to the max.

Know what’s great about this blend? I will tell you. The spiciness of the black pepper is so perfectly imparted to the people palate that the cigar shines like a new condom.

First sip of water and my face peels back. I have a neighbor that is a proctologist…he can fix it for me.

Never smoked a $5 stick whose char line sings arias to the gods.

And the ash never makes a move to fall on my Daffy Duck parts as I write this.
In high school, I always took drama classes to be in the plays. Girls in drama class were always ready to go…very progressive chicks. But there were always 2-3 gay guys that got the best parts. Back then, I didn’t really know any gay guys…I just thought these boys were very animated. Not that there is anything wrong with that.

One chick in class had Mel Blanc as a family friend. Mr. Blanc did all the voices for the Looney Tune characters. He visited our class once and I fell in love with the man. He was a god to me. Such talent in just one man.

“Like a Rolling Stone” by Dylan is playing. It matches the cigar experience to a tee.

Full tilt strength arrives in a chair carried by Nubian Eunuchs. There was a time that I thought I might be interested in doing that for a living. But my parents did not approve. The wanted grandchildren. Instead, I became a structural engineer. Pretty close.

My vision is intact.

This is a great cigar. And whoda’ thunk that it would come in the form of an inexpensive catalog cigar format.

2” left to go. Smoke time arrives at one hour.

“All Along the Watchtower” by Jimi is now playing. Amazon Music knows exactly how to treat a great cigar experience.

The sweet spot continues without interruption. No changes to the flavor profile. Every one is holding hands in a circle telling each other why they are addicted to nougat.

The powerful strength has no inherit intent on ruining the joy found deep in my liver. A perfect blend for newbies and sophisticates alike.
Not a lick of harshness or heat.

The finish is unrelenting as I sit here like an idiot smacking my lips like a reptilian hybrid.

And not a single construction issue.

Okie doke…my rambling has ceased like a lemming falling to its death.

Get some at Cigar Page.