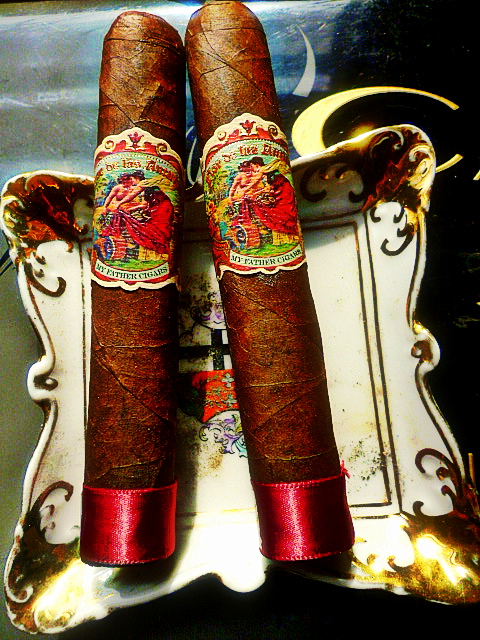 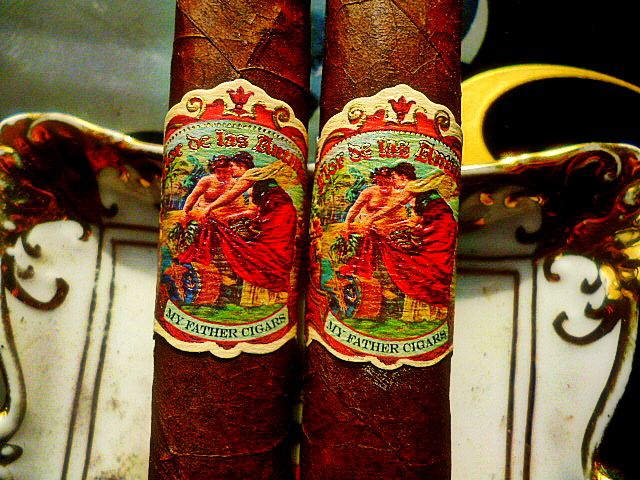 Flor de Las Antillas by My Father took off like wild fire. Cigar Aficionado gave the Toro 2012’s  #1 Cigar of the Year and a 96-point score in the process, and said: “Delicious from the first puff, with notes of nutmeg, white pepper and just enough strength without being overpowering. They are hard to put down.” Hard to beat that.

I reviewed this cigar once about 9 months ago roughly after they were released.
“Flor de las Antillas” means “Flower of the Antilles.” It refers to the Greater Antilles Islands.  Cuba is the largest island in the Greater Antilles, and thereby pays homage to the Garcia Family. (Antillas is the Cuban way of spelling the word)

The stick is a Nicaraguan puro, made of Sun Grown Cuban seed tobacco and hand rolled at the My Father Cigars S.A. factory in Esteli, Nicaragua. This blend was created to complete the My Father line of blends with a smooth, medium bodied cigar.

Construction is somewhere between rustic and more rustic. There is no shortage of long veins running the length of the cigar. The wrapper has a bit of tooth while giving off some nice oily sheen.

The wrapper is a light brown with a slight reddish hue. The ornate band and the red ribbon, at the foot, make a nice presentation.

I do the sniff around and detect cinnamon, cocoa, cedar, coffee, and spice.

I punch the cap and light it up.

Woo hoo hoo hoo..A big blast of the signature Garcia pepper assault. With the first puffs comes a toasty bread flavor. Coffee shows up too. There is a nice, light sweetness that accompanies the profile.

The char line is dead nuts. The flavor is very smooth. It heads out of the gate as medium in body. Six months makes a HUGE difference from my first review. Now I am getting what Garcia had intended for me to experience. And then I drop the cigar on the floor, knocking the ash off and making a mess of the floor. Jesus Alou and Manny Mota!

The sweetness seems to come from a light molasses or honey. And here comes the dark baking cocoa, which I fully expected in a Nic puro.  So far, a marvelous cigar.

The cigar is a deep well of flavor and balance even at this early stage. Even after my klutzy move of dropping the cigar, the char line has come back perfectly.

As it begins to leave the first third, the cigar becomes wonderfully complex. Creaminess has showed up and pulls the flavors together into one experience. The cedar, the cocoa, the spiciness, the coffee, and even that bit of toast work together as a team. This is an outrageously good cigar. I could smoke these all day long but, alas, I only have half a dozen left from my box purchase 6 months ago. I should have bought two. But the problem was that I was encouraged by that online cigar store to review cigars ASAP. With no time to rest, let alone age. So that was my experience with this cigar; a too early exposure and only getting the potential flavors. And then guessing what it would morph in to. I hated that. But I love this cigar now. So all is well.

I enter the second third and the flavors explode with such ferocity that I am taken aback by how good a cigar can be. And at roughly $6.00 a stick, well….it goes to show you what a master blender can do without the marketing scheme of “small batches.”

The second third sees the increase of red pepper and my sinuses and nose reflect this change as I keep the box of Kleenex nearby.

The flavors do not change; they do not incorporate anything new. They continue to meld together like an implosion of plutonium making the flavor profile even more dense and delicious. This stick has a big wrapper for such a small cigar and will have to come off soon. My fingers are crossed I don’t futz it up.

The last third comes into play with nice round notes. The wrapper comes off easily. And the cigar continues to be extremely well balanced with a very long finish.

In my first review, to show how time makes a difference, I claimed the cigar was not complex at all. The shit we do for free cigars.

All I can say at this point is how blissful this cigar is. I stop writing and just enjoy.

The last third finishes up sublimely. It never gets above medium making this a perfect, just perfect, cigar for a newbie or a morning cigar for people who don’t eat their Wheaties first.

I nub this cigar because I can. It is smooth and delectable. It is cool to the end. Like me.

I highly recommend this cigar.

I became a pistol enthusiast after our family became a victim of crime. It was 1997. And we lived in Mesa, AZ.

Back then, the class was 16 hours which included range time. And the use of a police tool that put you into situations of danger and you had to identify the perp and shoot using a plastic pistol connected to the machine. It would show you, afterward, where your shots landed. Very instructive and eye opening.

I taught my 11 year old daughter how to shoot. I bought her a small gun; a Browning .380 semi auto. She would go to the range and we had a great time.

As it turned out, she was really good with a pistol. We would also sit at the dining room table cleaning out guns after shooting. It was a nice bonding experience.

I took several CCW classes on the advice of my mentor who recommended going to classes taught by different instructors. I learned something new in each class.

Katie asked if she could go with me. So I ponied up the dough and we took a weekend class.

The classroom stuff bored her a bit as it would any 11 year old. So she kept tugging at me arm asking when we were going to shoot?

We went to an outdoor range. Katie had all her own equipment: eyes and ears. She knew how to load a magazine. She knew everything about her Browning which is actually a Beretta 92 style weapon.

There were about 35 of us and we all lined up, loaded our weapons, and waited for the go ahead to start shooting.

I was admonished, at first, by the range master about the kid. Katie liked to fire off all her rounds in about 2.3 seconds. The funny thing is that she was pretty accurate with about a 3” spread in 25 yards.

But this was frowned on. So Katie shot the way the rest of us did…taking our time.

When it was all over, we were awarded with a completion of class certificate. Katie did not get one because you had to be over 21.

As we got into the car, Katie asked me when she was going to get her CCW license. I laughed out loud. I explained she was too young. But she wouldn’t let up. The whole way home was, “Why not?” Over and over.

I asked her what she would do with the license if she had one?