I’ve been re-visiting some of my Perdomo cigars from my humidor. I need to be patient with these sticks so as to fully appreciate them, one must let them sleep the sleep of the dead in your humidor; the longer the better.

So, I’ve begun to pull these babies from my humidor that have been there from 6 months to a year…or longer. Unfortunately, I am lazy and do not keep a log or a journal.

My buddy, Dave Griffis, showed me what he does to keep track of his sticks; it’s simple and brilliant. First, he cuts of the cello at the foot, exposing maybe, ¼” of cigar. Then, he writes, using a magic marker, the month and year they went into his humidor. One note: Make sure the marker is completely dry before placing it in your humidor or the whole thing will reek of ink. The cigar gets some air and he knows the pedigree of every cigar he owns.

The Noir is one of my favorites and when it shows up on sale, I grab it. The press release, in 2011, stated this: “The Perdomo Reserve Champagne Noir is blended with dark, oily triple-fermented Cuban-seed Maduro wrappers meticulously aged in bourbon barrels. Filled with hints of chocolate and dark roasted coffee, this medium to full-bodied blend offers a sweet aroma with a smooth satisfying finish.

The Perdomo press release also stated:
“After carefully fermenting these thick Cuban-seed Maduro wrappers for well over 14 months in a natural pilon (A pilon is a bundle of tobacco in the fermentation process, wrapped in plastic), we age them an additional 6 months in oak bourbon barrels. This process helps to ensure parallel colors, a clean even burn, and rich, complex flavors,” states Nick Perdomo, President of Tabacalera Perdomo.”
“The Perdomo Reserve Champagne Noir is comprised of all Nicaraguan grown tobaccos making it a “puro.” The Cuban-seed secos, visos, and ligeros are similar to those used in the popular Perdomo Reserve Champagne blend.”

This is a pilon:

It seems the press release did most of the review for me. I shall attempt to add my two cents.

The first thing that strikes you is the beautiful cigar band. The combination of black and copper makes for a stunning first impression. The size I am reviewing is within my favorite size variation. The stick is very solid with some give. The maduro wrapper is very oily and there is quite a bit of toothiness. The seams are excellent and there aren’t too many veins. And the single cap is near flawless.

I clip the cap so I can get an intensified aroma spectrum. There is a definite hickory aroma as well as a belt of cocoa. The rest of the aromas are what one expects from a Nicaraguan cigar: coffee, nuts, cream, spice, and sweetness. The cocoa is so exuberant; it reminds me of hot cocoa on a stormy day…with the little marshmallows.
The wonderful hickory, smoky smell comes from the 6 months in those oak bourbon barrels.
Time to light up.

The first puffs are redolent with cocoa and the effect of that bourbon barrel…getting drunk on a 6 month bender. Then a blast of spicy pepper.
The smoke is spewing from the foot, the draw is excellent and the char line is close to perfect. On the retro hale, I get a massive blast of bourbon smokiness.

The cigar begins at classic medium body. The spiciness is potent. Half an inch in, I get flavors of mixed nuts; cashew and almond. I am surprised how prevalent and decisive they are.
The cigar hits the complexity mode very quickly. This brings on the creaminess that no upstanding Nicaraguan cigar would be without. An inch in and the cigar hits flavor bomb status. Not bad for a $6.00 cigar. Again, the story is told that money, marketing, and mystique are not the necessary ingredients for a good cigar. The Perdomo family has turned out excellent cigars without complaining to the public how difficult it was in obtaining the right leaves or if the temperature of the soil was one degree off. For me, that’s class. 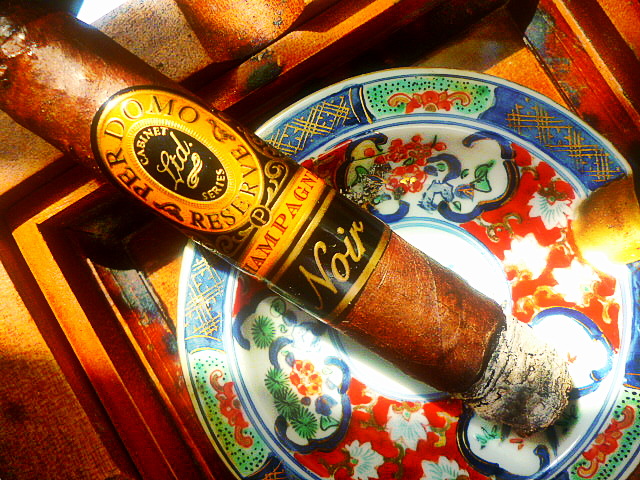 The cocoa is having a field day. The coffee jumps in, along with the creaminess and nut component to make an ice cream sundae.

The second third begins without major changes; except for the continuation of the cigar’s complexity digging deeper. The finish is very long as well. 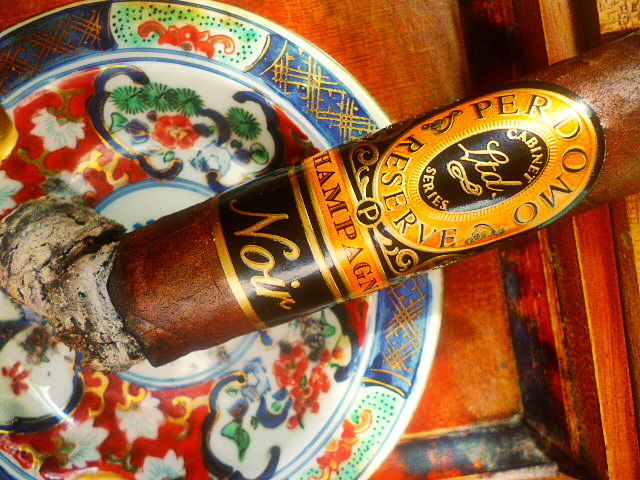 The spiciness goes to where I like it; not in the forefront and not in the background, but rather a place that doesn’t let you forget it is there without being an affront to the other flavors.

The halfway point continues to see the array of flavors impressing the hell out of me.

Apparently, the massive cigar band is the same for the different sizes of the cigar. It’s 2” long on a 5” cigar. It comes off easily.

We had rain all night but this morning is bright and shiny giving me good light for my photos. I’m a whore for good light when you have a lousy camera. And the cigar’s oils just glisten in that light.

Last night, I was forced to go to Polish Fest in Milwaukee. My wife works in “the” Polish deli in Milwaukee and they had a booth. They make a fortune selling food from that booth. My wife teased me into going with promises of late night favors and permission to smoke my cigars. I really didn’t need her permission to smoke. Milwaukee has not become a fascist town yet banning smoking from public places. I saw a lot of guys with stogies hanging from their slack jaws.
But I will never go again…on the promise of water boarding, I will not go. There were at least six Polka bands playing at the same time. It was like an LSD flash back. As one saunters from one point to the other, I was pummeled with the sound of Oom pah pah.
Argghhhhhh!!!

There is no worse music.

I took a break from writing to allow the cigar to burn down a bit. I begin the last third and the strength is beginning to build. The cigar is so smooth, well balanced, and with such a long finish; that is just a dream to smoke. I got a bunch of them on Cbid and paid half of the price above. That is just insane. At $6, this is an underpriced cigar. If it were a boutique blend, it would go for $8-$9 a stick.

I want more so I bid on some while writing this. Perdomo is an underappreciated cigar by the snobby boutique blend smokers. This stick is as good as many of the Viaje, Tatuaje, or Room 101 blends. Perdomo markets their cigars without much fanfare and allows for word of mouth to spread; thereby letting the marketing occur through the quality of its product.

I’m nearing the end and it was a fine journey. The cigar is now very full bodied and the flavors bloom like a bunch of freshly picked roses. The stick will have taken a good 90 minutes to smoke. I like the robustos with a slightly larger ring gauge, like this one. It lasts longer and still retains the size that highlights the flavors in a bigger way than a much larger cigar.

I have done several reviews of Perdomo product and always come away extremely pleased. If you don’t have any of these sticks, you should. You will thank your Uncle Katman.