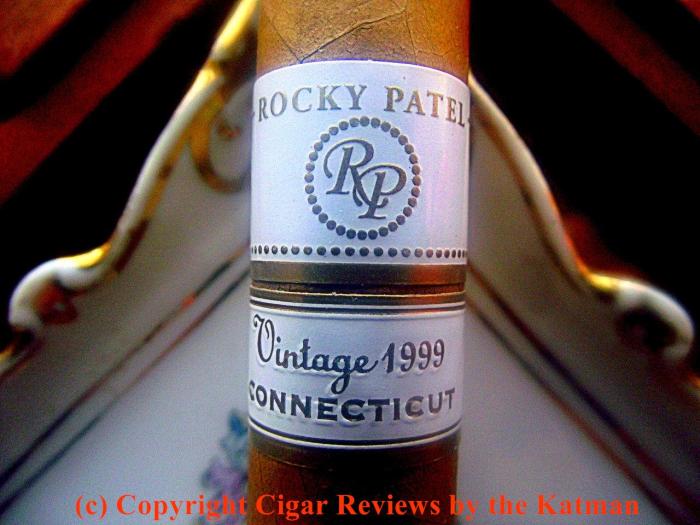 I can count, maybe, six blends that I like from Rocky Patel. On top of that, I am not a fan of Connecticut mild cigars. So I am hoping this is a very flavorful cigar; especially at this price point. For $8, I expect a lot from this cigar.

The PR machine makes sure you know that the fillers are aged 7 years. That means it should be very mellow. The cigar has a triple cap which is extremely sloppy. The seams are very visible and there are a lot of veins. The stick has a slight oily sheen and I feel a bit of tooth.

The rest of the PR tells us that the Connecticut wrapper is there to keep in check the 8 year old Nicaraguan and Dominican ligero fillers.
I clip the cap and find aromas of mild cocoa, nuts, and toast.
Time to light up.

I get a Garcia type blast of red pepper. Right behind that is a nutty/almond element. I read a couple reviews, from reviewers I respect, and it seems they smoked the cigar too soon as they reported a severe bitterness. That comes from the cigar being too green to smoke. Patel cigars are Old School blends and need loads of humidor time. I don’t get a drop of bitterness so I’m good to go. I smoked one a few days ago and I found I liked it but this second one will test its consistency.

The ligero off sets the mild use of the aged Connecticut and so far, I like it. Following the spice and nuts comes some buttery smooth creaminess.
I want to thank my brutha’, Jason Harding of BestCigarPrices.com for the samples and who sell this stick for a few shekels less than most.
So far, at the 1” point, it turns out to be one of the few mild/medium cigars that I enjoy.

The frigid cold, here in Wisconsin, has been taking a toll on my cigars. It is very difficult to keep a 70% humidity level. And weather, that seems to include a minus degree everyday, really messes with the cigars. I can’t tell you how many sticks this cold weather has devastated with dryness.

The cigar char line has required a couple minor touch ups; but more for the photos than real necessity.

The thing I noticed the other night, smoking this stick, was how fast it burned. The cigar seems nicely packed and hasn’t any soft spots. I can hear crackling as I smoke. I am going to have a wrapper problem due to the cold any time now. (But I don’t)

This cigar is not as tasty as the previous one a few nights ago. Mind you, I smoked that one near the end of the night when my palate was nearly fried from chain smoking. And this morning, my palate is fresh. 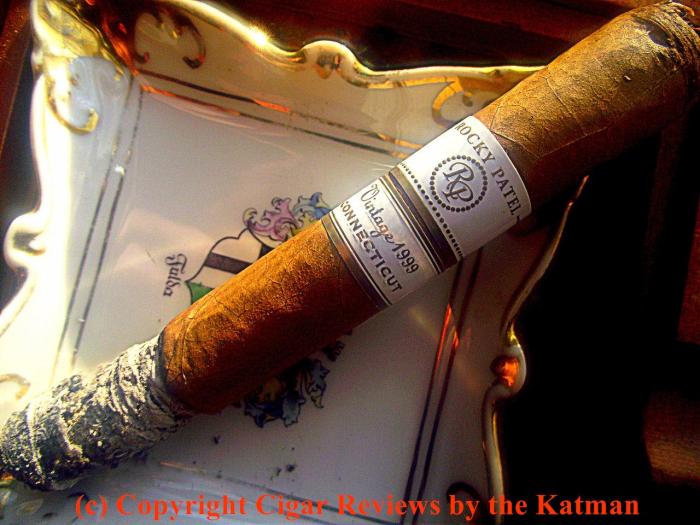 Near the end of the first third, the flavors are: Spice, sweetness, cedar, wood, nuts, and a newly added creaminess. The body is mild/medium but now that the flavors have finally decided to show up, the strength gives the illusion of a stronger cigar. The red pepper is going to town.

The second third begins and what I experienced the other night, I am experiencing now. The difference being that the flavor profile explosion happened much earlier. So there might be a consistency issue. For $8-$9 a stick; there shouldn’t be.

The cigar is downright delicious. It is a very spicy cigar. It is offset by the creaminess and sweetness. I much prefer this to the other Vintage blends; the 1990 and 1992. This stick has much more character and balance. And it just plain tastes better. But is it worth the dough? I’d have to say I’m not sure.
But these sticks were free and I am fortunate to have had the chance to take them out for a spin.

I hit the last third, in record time….I’ve only been smoking this cigar for 20 minutes. And the flavors have become subtle. Not what I was expecting. The spiciness moves to the background. The creaminess and cedar move to the front. There is some complexity going on. The cigar is better balanced and well rounded. It has a medium finish. And the strength hits classic medium. 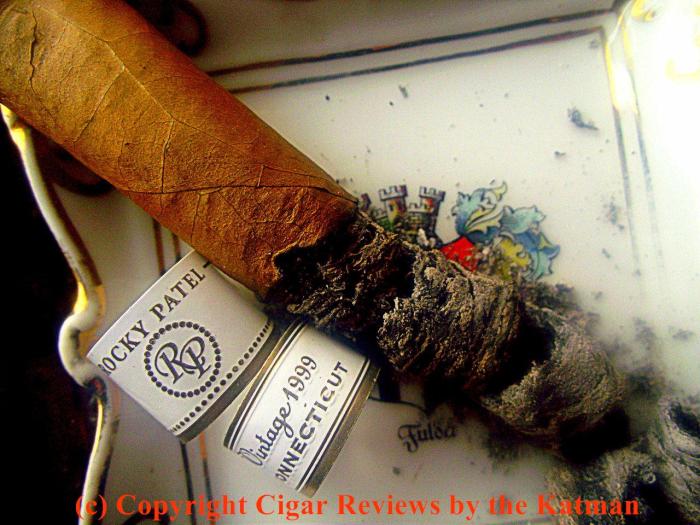 As the cigar nears its end, the spiciness comes back in force. The wood, and now some added leather, take a bow. The char line has been one of the more impressive ones that I have seen in some time on a reviewed cigar.

And then major flavor bomb status hits with 2” to go.This is, by far, the most flavorful mild/medium blend I’ve smoked. OK. So I see where the $8 was spent. The tobacco is impeccable and the blending and processing of the cigar is top notch. For us poor little church mice, I would definitely consider buying a 5 pack. I think they are worth it. For you bucks-up rangers, a box will not let you down.

The cigar finishes out like a raging bull due to the flavors. But not a hint of harshness or heat. The cigar is smooth and balanced and with a long finish. And not a hint of nicotine. Wally Guse….open your wallet.