Wrapper: Dominican Habano Ligero
Binder: Dominican
Filler: Dominican
Size: 5 x 50 “Rondo”
Body: Medium
Price: $6.75-$7.20
Note: My cheap camera broke in the midst of downloading photos. So I had to switch cameras and by the look of it, the even cheaper camera did better.

CA gave the Presto (4.5 x 48) size a 94rating. It is the newest addition to the Aging Room brand. And Cigar Insider gave it the Top Scoring Cigar of 2011.

The original plan that Aging Room Cigars planned to use this blend for Rafael Nodal’s (Oliveros Cigars) Swag line but there turned out not to be enough raw materials. So the M356 was born. Named for Monday, the 356th day of the year.

I found this on one of the online store web sites:
“According to Hank Bischoff from Habana Cuba, he and Rafael Nodal were visiting the aging room and discovered some brass knuckles on one of the shelves. As it turned out, one of the rollers left them there, and Hank and Rafael saw it as a good omen. ‘The knuckles were looking out for our blend,’ Hank explained. ‘So we included them on the band, box, artwork, etc., so they can keep looking out for us and this great blend.”

If you ask me, that’s a plot line from the “Twilight Zone.”

The stick is well done, Rafael. A gorgeous light brown wrapper with a few big veins and mostly invisible seams. The stick is solid but has the perfect amount of give when I squeeze. In the light, oiliness appears. The cigar is very smooth to the touch. Like me.

The cigar band is the typical Aging Room style with the small words “Small Batch” in one place. And in gold, are the infamous brass knuckles. 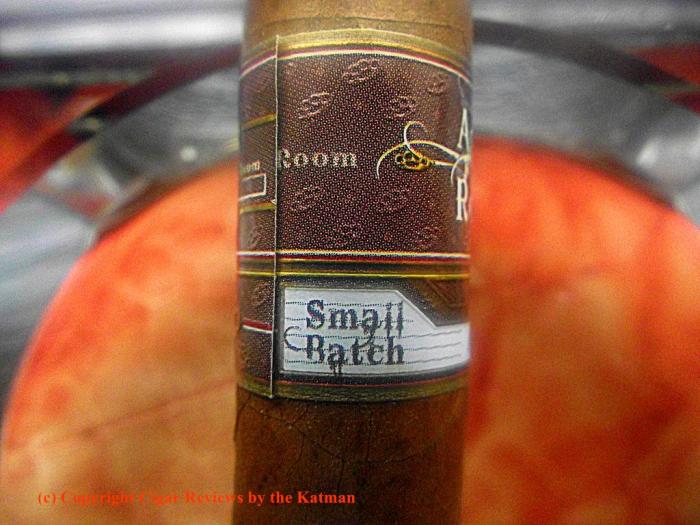 I clip the cap and find aromas of sweetness, sugar cookies, cedar, leather, black licorice, and caramel. Sort of a Christmas morning smell.
Time to light up.

The first puffs are as sweet as candy. Right from the start, it has delicious qualities of honey, licorice, leather, nuts, ginger, caramel, toffee, wood, cinnamon and nutmeg. You have to bear down on your ass to tell the difference between caramel and toffee. But you can do it. Think if caramel as a Snickers bar and toffee as a Heath bar.

The char line needs a minor tune up and all is well.

Black pepper begins to climb the ladder now. A nice addition to round out the cookie/candy bar taste. A little zing to Grandma’s kitchen.

The draw is perfect. And the balance finds itself working hard very early in the smoke. The honey element grows stronger. Usurping the caramel.

The cigar is only at the 1” mark and there is a wonderful boost in the character of the cigar. The strength started out on the mild side of medium bodied. Now, it is classic medium. Earthiness makes a daring entrance giving the flavor profile some real oomph. The black turns to red pepper and is very potent.

I cannot believe a stick, in this modest price range, has all the qualities of high premium cigar. This stick could match any $12+ cigar. It is incredibly well balanced and is brimming with character, nuance, and subtlety.

Notes of coffee enter the flavor arena. And a bit of creaminess. The sweetness is a trifecta of caramel, toffee, and honey.

I am almost at the halfway point and there is a woodiness that is driving the bus at the moment.

The cigar is much stronger now. Not for you, Wally Guse. I tend to disagree with the PR that it is just a medium bodied cigar. I am definitely having a medium/full experience. Maybe after 6-12 months humidor time, they mellow out and medium is as far as they get. But this one has only had a few weeks in my possession.
Stronger, yes; but not harsh. 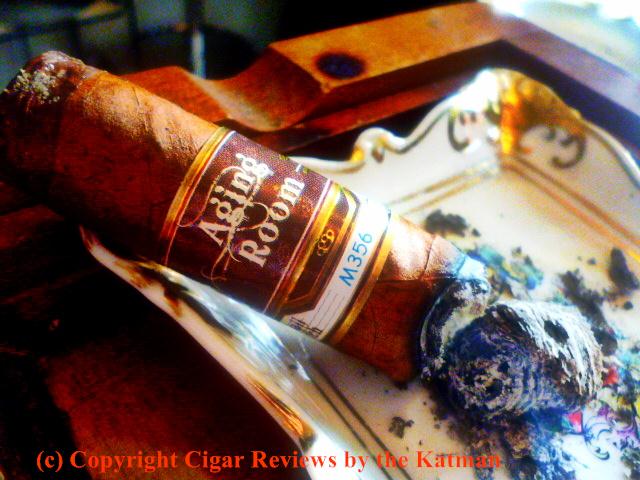 The last third begins with a boat load of creaminess. It enhances the sweet components greatly and gives the cigar a very long finish and it is very chewy. I would love to have a box of these.

By the halfway point, I’ve put in almost an hour of smoking time. A real slow burner. 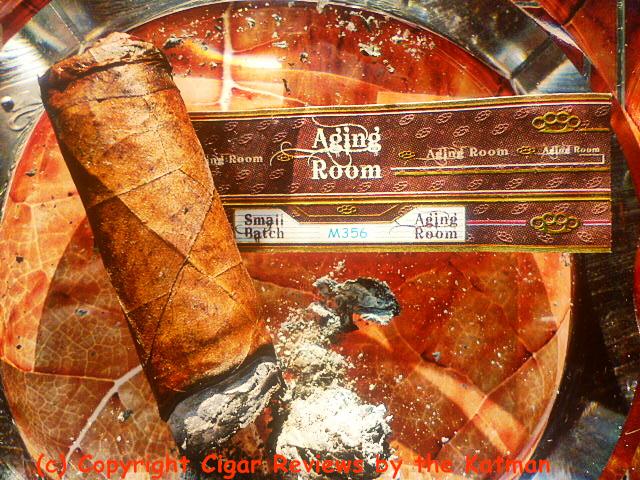 The triple cap is behaving admirably as no loose tobacco finds itself on my lips. Or hanging from the cigar. The char line has been near perfect.

This is a real solid cigar. No monkey business, just fine tobacco doing its stuff.
I begin to get some nicotine kick.

Complexity rules the roost in the last couple inches or so. Flavors are swirling.

The cigar hits its sweet spot now. Flavors are booming and the cigar is most excellent.

It finishes out with every flavor I described earlier with the addition of a strong anise element. The nicotine is kicking my ass. I would definitely describe it as medium/full, not medium.

And now for something completely different:
This story is about a rock n roll experience back in the day…like 1974. I was touring with a big time English progressive rock band. I played bass.

Most of the time we headlined but there were those wonderful times in which we were the support act; such as opening for Jethro Tull, Deep Purple, etc.

Most of you may not know who Larry Coryell is. He is the father of jazz fusion guitar. He changed my life with his style back in 1972. Along with his cohorts of the day: Stanley Clarke, Ron Carter, Keith Jarret, and Mahavishnu Orchestra, and so forth.

I was a jazzer when I auditioned for Curved Air, in 1974, and won the audition hands down because this kind of playing hadn’t reached the English shores yet. All the bass players, at the audition, played exactly like Chris Squire of “Yes.” All chops and no soul.

We spent a week in Switzerland opening for Coryell. At the time, Switzerland had no big arenas so we played in auditoriums meant for something else.

But we packed them. We were a double threat.

It had been a few days and Larry warmed up to us. I was the only cigar smoker in the group and Larry noticed it. He asked us up to his room after the gig one night for some Cubans and libations. We all enthusiastically said yes.

We worked hard in our one hour performance. Normally, we played for 2+ hours when we headlined. With lots of encores.

Swiss audiences are very reserved. Applause is minimum. There is no screaming. No girls on top of boys’ shoulders with their tops off. They just sit quietly in their seats taking it all in and really focusing on the music and performance. I liked that about them. I hated raucous audiences. No one was really listening. Now we never had a Beatles-like reception but I got the taste of what it was like not to have anyone listening, just going nuts. Of course, in those days, the Beatles had horrible sound systems and they couldn’t be heard anyway.
We had one of those systems that blew your hair back.

We were up in Coryell’s hotel room and he brings out some Cubans. I have no recollection of what they were but Coryell was a wealthy man and I’m sure he didn’t skimp.

None of my band mates; Sonja, Darryl, Mick, and Stewart smoked cigars. I don’t think they had ever tried one but they were in the presence of greatness and when in Rome…

Now, I loved cigars. And Coryell noticed that. While the rest of the band turned a myriad of shades of green, Larry and I were in heaven.

The worst thing you can do with a celebrity, if you should meet one, is act like a fan. Be yourself and talk about the weather.

But noooo…my bandmates fucking interviewed him. I was so embarrassed that I couldn’t look up from my cigar.
Curved Air has close to 20 albums under their belt so they were no slouches. And here they are mesmerized. And behaving like rank fans.

Larry was very magnanimous and courteous and the more we drank his fine scotch and smoked his weed, the more magnanimous he became about answering the stupid questions.

An hour or so had passed, and one by one, the band had excused themselves leaving most of their cigars in ashtrays. They ran back to their rooms where a couple even got sick.
Not me. Oh no, not me.

I sat with Larry all night long bull shitting about music and life. And smoking one cigar after another. I have never been a drinker so the joint, occasionally, being passed around was enough for me.

This had become the highlight of our European tour. We always did 4-5 weeks on the Continent and came back to England to do another 2-3 weeks. Take 3 months off and do it again.

I am pleased to announce that Larry is alive and well and still playing. And I shall never forget his kindness and down to earth personality.