Mayimbe by AJ Fernandez…or “The Village Chief” in Spanish. It made its debut at the 2013 IPCPR trade show.
Production is limited to 2,500 boxes of 10 for each size.

This is also the most expensive AJ cigar yet. Probably because he had to pay for a new factory (Tabacalera Fernandez S.A.) in Estelí, Nicaragua.

This stout little robusto is expertly crafted. Packed solid. A deep, dark chocolate brown. A flawless triple cap. Very oily and some tooth here and there. The cigar band is quite ornate but seems a little big for this size of a cigar. I can’t even get the name of the cigar in the photos. And lastly, a foot band with the simple “AF” upon it.

I’d like to add that once the foot band is removed, I am surprised by a beautifully perfect round shape. Absolutely perfect.

I clip the cap and find aromas of spice, cedar, leather, cocoa, and citrus notes.
Time to light up.

Spice starts off the journey. And it gets strong fast. Behind that is delicious cocoa, cedar, leather, earthiness, and citrus. It is damn near a flavor bomb in the first quarter inch. But let’s be honest, the price point on this line of cigars makes you expect a fine, fine, cigar. A good Nicaraguan will give you loads of flavors for $6. But it is the complexity, richness, and character that set this stick apart. 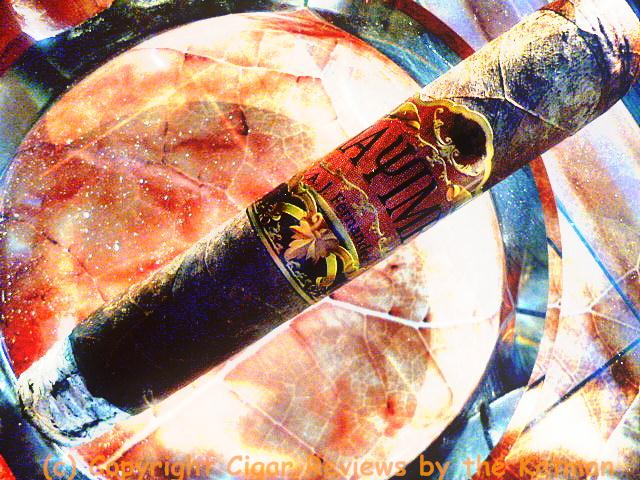 The draw is good but not exceptional. I can easily hold the cigar in my mouth and type without billows of smoke blinding me. There is a yeasty element added.

And then right behind that comes the sweet creaminess. I am now at the 3/8” mark. I’ve only allowed this stick to humidor rest a few days. I had a hunch I’d get the real deal right away. I have a couple back up sticks in case I was wrong.

The draw shifts into gear and the smoke fills the room. The char line needs a minor touch up.

Flavors are incredibly intense by the 1” mark. This goes beyond flavor bomb status. It’s going nuts. 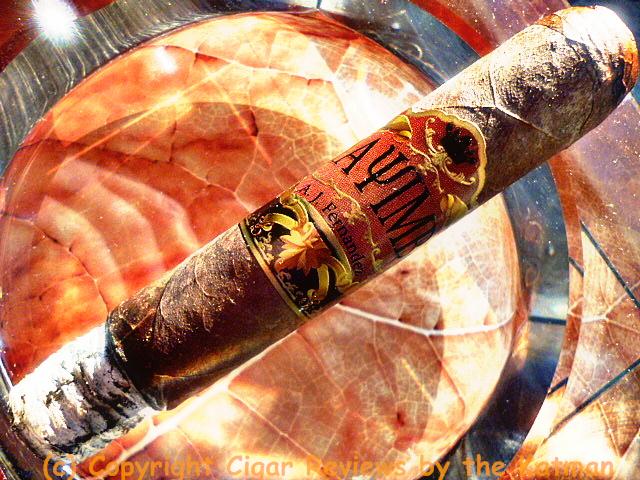 The spiciness moves, suddenly, to the middle ground of the flavor profile. Sweet cream and cocoa move to the front. Citrus right behind. And behind that is the cedar and leather. The rich earthiness begins a climb upwards in what seems to be where the cigar will settle.

The body started off medium in strength but is approaching medium/full quickly.

The char line is dead nuts since the early touch up.

Approaching the second third, the cigar becomes very smooth and rich. Complexity begins to dig its heels in. The balance of flavors pulls back from going crazy and becomes cohesive.

The ash is getting dangerously long and I have to decide whether to be a show off, risking it falling on to my laptop….or just knock it off and be done with it.

I take a sip of water and the upfront flavors coat my palate like an artist’s paint brush. I was going to say a spackling knife… 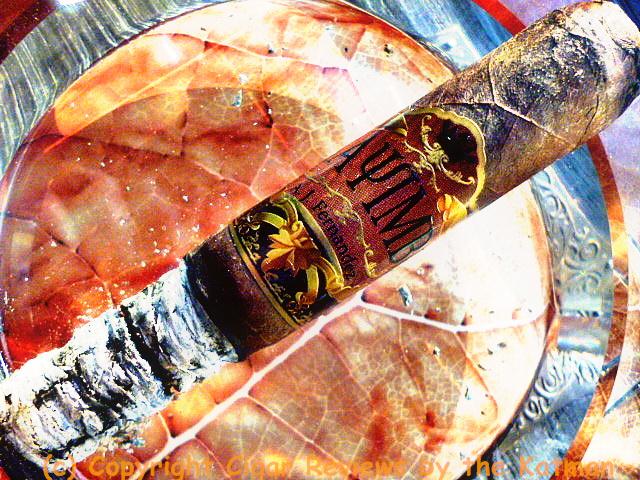 The second third hits full complex mode. This cigar has the ability to ruin you for other cigars. Yes, I’ve made no bones about the fact I am a big AJ Fernandez fan. His blends appeal to me in all manner of taste and character. This boy has the right stuff.
The stick is as smooth as glass. Bold but refined. All flavors accounted for except that the spiciness has moved to the back of the line. Yes, I grabbed a Diet Coke for a NYC egg cream experience due to the heavy influence of cocoa and cream.

There aren’t any significant changes during the second third. Actually, there is no place to go. OK. Here is the flavor line up in descending order: Cocoa, sweetness, creaminess, earthiness, citrus, cedar, leather, and spice.

I’d buy this cigar again even though its price point is out of my league. I just might treat myself to a box of 10. But because this is a limited edition run, I shan’t wait too long.

I remove the cigar band and some of the paper sticks to it.

This char line has been one of the most worry free, spot on burn lines I’ve seen in quite a while. Construction is excellent. And the cap doesn’t let a single piece of loose tobacco touch my lips.

The last third begins with seeing an uptick of the citrus. It is lemon zest. Tangy and tart.

Nicotine shows up and I let out a big gulp. Shit. Still a couple inches to go. And I’m swirling.

The strength is still at medium/full but it would be only moments until it hits full bodied.

Flavors are subdued now. A new flavor arrives in the form of hazelnut. The lemon zest gets stronger. But now, the other flavors are all at the same point in line. 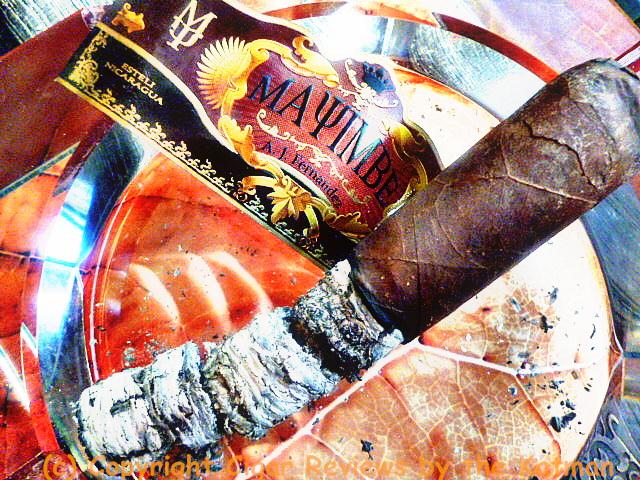 And then the cigar hits full bodied. Oy.

Two reasons I don’t put it down: First, the flavor profile is to die for, and second, the price.

We are on cruise control. What a delicious cigar. One of the best tasting sticks in a long time. I slow down so I don’t go blind from the nicotine. My hands begin to shake. Oy.

The stick finishes out with a resurgence of red pepper and the flavor profile becomes bold for the last time. The strength is definitely full bodied.The nicotine is kicking my ass.

Yes. I highly recommend this cigar. It’s expensive but worth every dime. This is cigar blending at its best.

And now for something completely different:
1974: 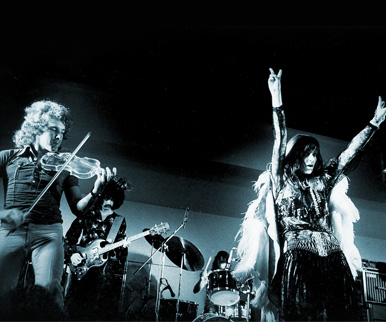 During the violinist’s long, dragged out, solo performance, Stewart and I ran back stage and imbibed in herbal refreshment. The solo was in the middle of the band’s signature tune, “Vivaldi,” This was the violinist’s favorite composer. He played the same thing every night. Our cue from the mish mosh of a psychedelic solo was the same each night and we would run back onstage and plug in.

What I didn’t know was that I had knocked the tuning pegs on my bass out of tune when I put it down on top of my mega amplifier.

When we returned, we played like the devil himself… furiously playing a circle of fifths, and none of my notes were right. And we played it in triple time.

I had knocked the bass so out of tune, I wasn’t even in the same key anymore. The guitarist, and co-leader, came over to me and started yelling out the chords….completely humiliating me in front of thousands of people. I yelled back, “I am playing those notes,” as I pointed to my fret board. The strange thing was that I had actually knocked two of the strings an entire half step up. So it wasn’t like it sounded terrible, just not right. A circle of fifths is when you start on, say “A” and then play the fifth with is “E”…and so forth. We went around 12 times of the whole scale. If you get lost, you’re dead; as the notes are in the same key, but are playing harmony instead of the root note.

I tried re-tuning while playing, but made it worse. When we finished, we ran off stage and waited for the obligatory….”More, more, more,” and the stomping of feet and clapping of hands.

The violinist let loose the dogs of hell on me. I tried to explain, but he would have none of that.

We went back on stage for our encore and I quickly used my electronic tuner to fix things.

On the road that day, we had stopped for lunch and I bought a yo-yo. Before we started every encore, the chick singer stood at the mike and blabbered something incoherent to the audience and they ate it up. She was a goddess to them. I stood next to her playing with the yo-yo. I thought it was funny. No one laughed.

To get even with me, the violinist yelled out, “Ah 1, Ah 2, Ah 3 and the song began with me 20 feet from my amp and not plugged in. This song, in particular, was bottom heavy and there was no bottom while I fumbled trying to get the yo-yo string off of my middle finger. It was a failure. I plugged back in and joined the band. The violinist was smiling and giving me the stink eye the whole time.

I had my first solo coming up and the yo-yo dangled from my right hand. It started to get caught up in the strings. I yelled for a roadie to help. Beric Wickens, a giant of a man, raced out to me and started to unscrew my bass. ??? I yelled at him to stop but he couldn’t hear me, so I stopped playing and pounded on his huge back which was bent over in front of me. He looked up in complete confusion as I yelled at him to cut the yo-yo string. He tore it with his hands and rushed off stage.

I stayed behind with the road crew that night and let the band go on its merry way to a restaurant. We always ate before a gig but Darryl would always barf before we went on so he was hungry later. I stayed behind. I was so pissed off I couldn’t breathe. I ended up living the life of a roadie for one night. Leave the auditorium at 3am and arrive at the next gig at 3pm…getting to bed at 5am and up at 8am…almost no sleep.

I went to the hotel and checked in. I collapsed and then the violinist stormed through the door to give me what for. I ignored him. We never got along after that and it was the beginning of a strained relationship. To this day, I’ve never associated with such an egomaniac musician.

My girlfriend and I lived in his big house for a while at the beginning of my entrance to the band. Darryl liked me then. But it all went to shit when my 5 foot tall girlfriend failed to take his two monstrous sized dogs out to pee one day. He held that grudge for a long time.

The final act that destroyed me was the day we were listening to the entire play back of the “Live” album. We were at George Martin’s Air Studios.

At the end of the playback, out mental midget of the managing director of the management company made the first comment: “Well. I guess we know who the star of the album is,” as he pointed at me.

The look on Darryl’s face was from a horror movie. He stormed out. This was the real beginning of the end.