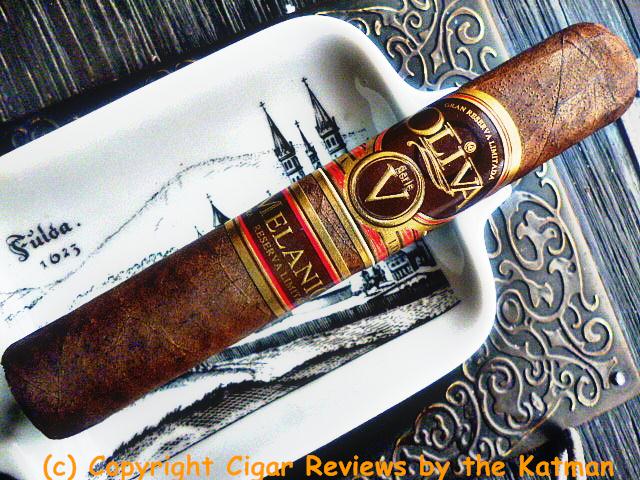 I’ve written a couple reviews of this cigar on different blogs but not mine so I thought it time to add it to my catalog.

“Blending Notes: The Serie V is full flavored yet smooth. The long filler tobaccos are a blend of Oliva Nicaraguan Habano that emphasizes tobacco from the Jalapa region, an area known for a more nuanced leaf than the Esteli or Condega regions. This carefully aged Jalapa blend produces a particularly flavored smoke.”

This is a limited edition cigar and it ain’t cheap. Especially for a robusto size.

The cigar was developed as an homage for the family patriarch Melanio Oliva. The binder and filler come directly from the proprietary Oliva farms in Nicaragua. The wrapper was grown on the Oliva farm in Ecuador. First time an Ecuadorian wrapper cloaked an Oliva cigar.

The stick received a 92 rating from Cigar Aficionado. They said:
“A gorgeous, box-pressed perfecto with a superb wrapper. This cigar is complex and flavorful offering floral notes and hints of rich, malted nougat.”
Malted nougat. Now that’s a palate that impresses me.

Construction is pretty good. Seams are tight. A few veins. A flawless triple cap. A mottled Colorado wrapper. Oily and smooth.
I clip the cap and find aromas of fruit, nuts, cocoa, sweetness, and coffee.
Time to light up.

First puffs are very spicy. The draw is perfect and smoke pours from the foot like my tiny appendage on my wedding night. It is black pepper. Nice change. There is a nice baguette element. Crisp and yeasty.
Cocoa shows up quickly.

Thanks to Andy S. for gifting this to me…among other wonderful sticks.

The bread component continues but it also becomes toasty. Creaminess appears. And all of this in the first half inch.
The spiciness becomes very strong and makes me sneeze on the retrohale. A nice coffee flavor enters stage right.

The char line gets a little funky so I fix it. Fingers crossed as this is the only stick I have. But Andy told me these have been cooking in his humidor for some time.

There is nothing like an Oliva V well-aged. My only issue is that this cigar typically takes a long time to get there. The Melanio I am smoking clearly has been rested and given its due.

By the 1” mark, the cigar begins to show signs of flavor bomb status. Here are the flavors: Spice, cocoa, creaminess, toast, bread, earthiness, and sweetness.

The char line behaves itself.

Strength is at classic medium. 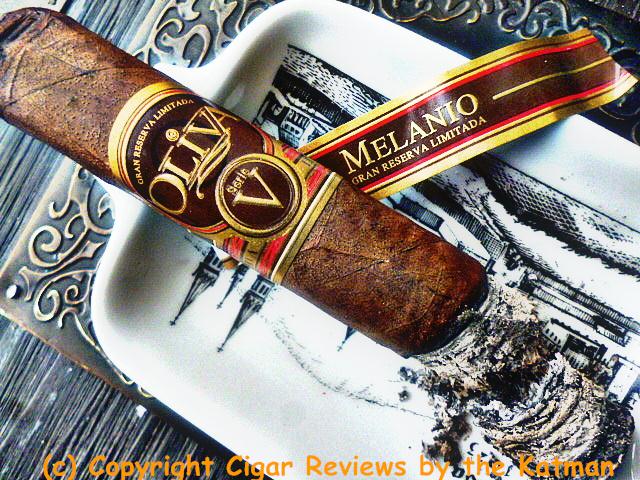 The second third begins and flavors are just explosive. It is now a flavor bomb. The strength is almost full bodied. But the stick is smooth and rich.

The creaminess pumps out boatloads of flavor. A nice nuttiness forms. And the coffee that was itty bitty at the beginning becomes strong espresso. The cocoa fades a bit. 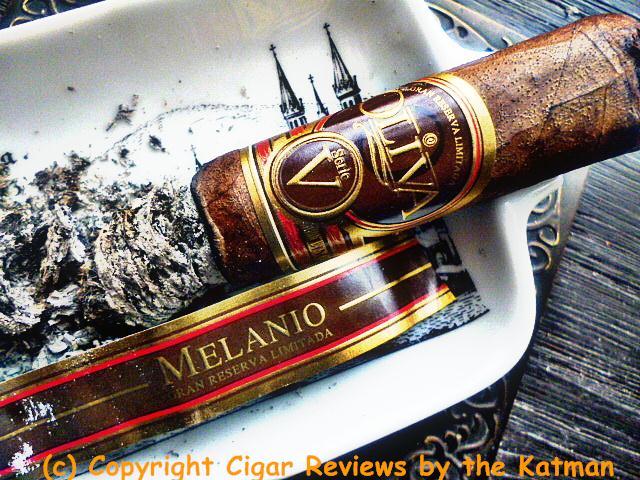 At the halfway point, things mellow a bit. Complexity digs in. A nice rounded flavor profile begins. Generally, the difference between a $6 flavor bomb and a $10 flavor bomb is the complexity. So this is basically a treat for yourself cigar.
The last third begins and I am very impressed. The difference between the Melanio and the regular V is hard to compare unless you smoke one after the other. I smoked a regular V the other night and if memory serves me, it just wasn’t as complex as the Melanio. 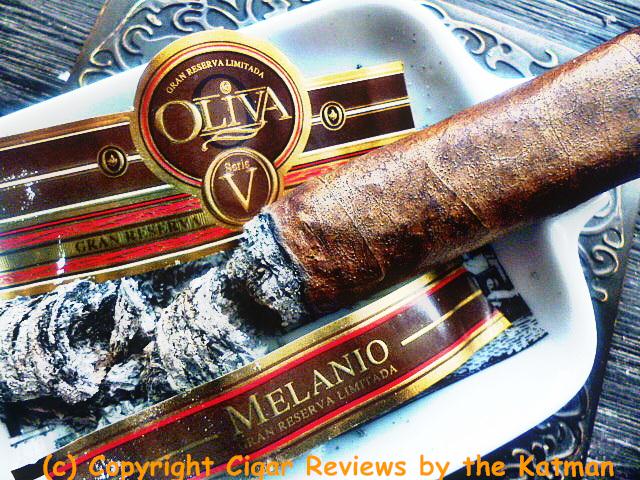 The last third finishes with a real flourish. Flavors are bold, rich, earthy, and complex. The strength makes it a cigar for aficionados and cigar smokers with rich palates. Not for newbies.

Continuation of the Rock and Roll Hall of Fame drummer, Hal Blaine…(from the Curivari Achilles review) 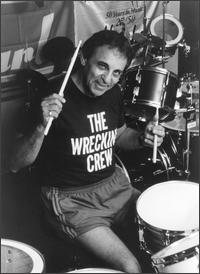 I have so many fun stories associated with Hal, it is hard to choose.

Let’s see….Hal invited me to lunch on his yacht. Along with some other session player friends. I don’t remember their names. A nice bunch of Jewish boys. So Hal ordered from Canter’s Deli on Fairfax. (First owned by vaudevillian comedian, Eddie Canter.)

We had a smorgasbord of Jewish comfort food. I refuse to list them because I live in Milwaukee where there is not a single Jewish deli. Well…not one that should be allowed to call itself Jewish. All crap. I have to go to Chicago to indulge…90 miles away. Just like Cuba and Florida.

We lit up a doob before we ate. And stories were told. I was amongst the big league of L.A. musicians. So I mostly listened until Hal told them I played with Stew Copeland of The Police. We laughed so loud and hard we thought someone would complain and call the cops. Does pot make you paranoid?

For fuck’s sake, we were on a docked yacht in Marina Del Rey. Who the hell is going to complain?

I’m one of those guys that loves to hear stories. You have no idea how many musicians I knew that got jealous when hearing them and got all shitty. Not me. I loved listening to bits of history. I loved music since I was a little guy.

Again, I cannot remember names but one guy asked if we wanted to see his new studio?

We were stuffed to the gills with some of the heaviest food on the planet. And Hal had 20 years on us. And then the same fella brought out dessert: Colombian marching powder. Wham! I was no longer lethargic.

Off we went. This guy owned a studio…or should I say; STUDIO!!

It was in the Hollywood Hills surrounded by homes of musicians and movie stars. The view was to die for.

To make a long story short, we all sat down and grabbed an instrument. Luckily, I was the only bassist.

We started jamming on “Sugar, Sugar,” by the Archies. LMAO. We were all high and laughing hysterically. One of the guys had actually played on the record. There was no Archies. Totally a conglomeration of studio cats.

We played for about an hour. And then, in walked Bobby Hatfield and Bill Medley…The Righteous Brothers. Hal had called them from his car on the way to the studio.

I almost shit myself. I had met them once before when I interviewed them for my PBS TV show in 1982.

The drummer had lit up another doob and Bill walked over and took it from him. And then laughed a huge belly laugh. After a few drags, he handed it to Bobby.

I knew what was coming and I did not know a single song in their catalog. Oh fuck!

I took the studio owner aside and asked if he had one of those giant music books with 1000 songs in them? He did and it had all the boys’ songs. Whew.

Unfortunately, it was a piano book with the bass lines for the left hand of the piano. So I did some wood shedding when we began to play.

Bobby and Bill made it absolutely clear that no recording will go on. They were very stern about this. They didn’t want any boot legs showing up. I thought that here was my only chance to play with these guys and I’d have no record of it…so to speak.
The first hour, we jammed on a bunch of R & B tunes that everyone knew. They said they were in no hurry to sing their songs. And besides, we weren’t paying them. LOL.

Little Latin Lupe Lu was a mind fuck of an experience. This was the most fun song of the session. It lasted at least 30 minutes.

And then the sun set around 8pm on the California summer day. And guys were talking about getting home before their wives beat them. That was OK. We had played for 5 hours. And I was adrenaline soaked.

Hal drove us all back to his boat where our cars were parked.

A few months later, Hal called me and gave me Bill’s phone number. Their bass player was sick and couldn’t play Friday and Saturday at their own club in Orange County. Been there many times and once in a while, they showed up to perform.

Times were arranged and for two glorious nights, I was in the Righteous Brother’s Band. I told all of my friends and they didn’t believe me…so only a few came. It was a rush of the highest order to be on stage with these legends. Good memory.

I remember being very sad when in 2003, Bobby died of a heart attack brought on by cocaine at the age of 63.

I want to take a minute about his subject. I am 64 and did my share of drugs when I was young. But then it hits you that I am not made of Teflon and if I keep doing this bad things will happen.

I have so many friends that died in the mid 50’s because they did not take care of themselves. I don’t understand that. At some point, you have to realize that you are a middle aged man who is becoming fragile. My friends that died all drank hard and did coke and whatever else. And every single one died of heart failure.

Fortunately, I have a nice group of friends, which like me, realized doing drugs is for the young; not for old men.