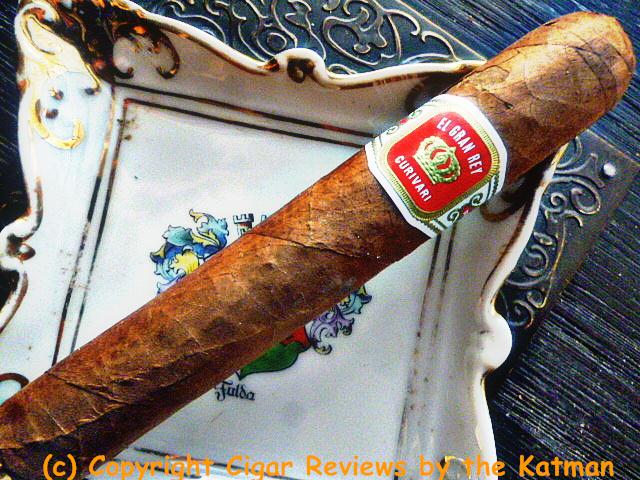 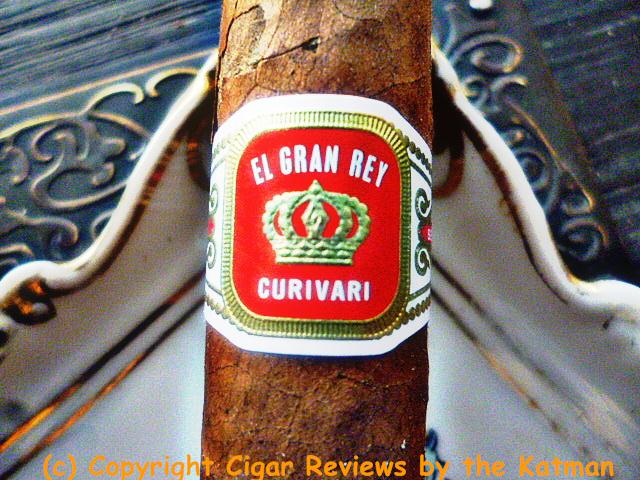 I am on a journey quest. I am going to review every single Curivari blend available to the public this side of the Atlantic Ocean.

I am now on possession of all blends. So expect to see the best little unknown secret in the cigar industry unfold before your very eyes.

Curivari began making cigars for the European market, introducing its Selección Privada in 2003.

If you want some background info, please return to my three previous reviews of this brand.

Here is something Atlantic Cigar has to say about the Curivari El Gran Rey that I like:
“Curivari El Gran Rey: first there were limited editions, then came the boutique brands, and now the cigar revolution continues with “ultra boutique” cigars! This ultra boutique brand is starting to grab the spotlight within the cigar community. Those looking for the next high-quality, rich and balanced cigar are quickly turning to Curivari’s excellent stogies. The El Gran Rey is an all Nicaraguan blend, a full bodied jewel that’s rich and spicy, but refined and balanced. Core flavors of sweet spices with hints of caramel and honey are present. El Gran Rey is a complex and satisfying smoke. The cigars are all triple capped and packaged in cedar boxes of 10. This is a fine smoke that will leave you wanting more.”

I guess I could end the review right here and you could go back to your nap. But I have no sense of fair play and chug along.
This is a very rustic looking cigar. The caramel colored wrapper is mottled. Seams are not tight at all. Lots of small and big veins. But the triple cap is done very nicely. There is only the slightest bit of oil and the wrapper feels smooth.

I clip the cap and find aromas of sweetness, gingerbread, spice, bread, and dried fruit.
Time to light up.

The first puffs are sweet and full of rich caramel. A delectable milk chocolate mates with the sweetness. The draw is spot on. Creaminess appears almost instantaneously. It is darn near a flavor bomb in the first eighth of an inch. I have a tape measure. 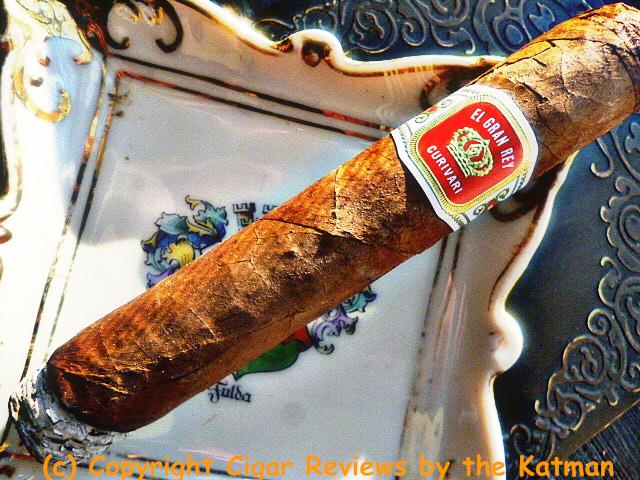 There is a nice bread-like note while at the same time it is toasty. Spiciness at the back of my throat begins to build…slowly. Man..what can’t these Curivari people do?

That’s it. ¼” in and it is an official flavor bomb. It is bursting at the seams with flavor. That was my complaint about recent reviews of RyJ by RYJ and Casa Fernandez Miami 35th Aniversario.

I’ve had pretty good luck with all the blends so far except that the Achilles fell a bit short for me.

The red pepper burning my tongue has come out of hiding to say hello. I near the end of the first third and I have no idea where this cigar can go from here. Complexity is its only refuge from my scrutinizing.

A series of nasty little cracks have shown up at the cap. This dry weather is wreaking havoc on my cigar wrappers. I have even resorted to covering my humidors with blankets. But this can’t work miracles. It is not the cigar’s fault. Meanwhile, the char line is perfect.

The complexity does indeed kick in. It is like a sling shot effect. The flavors start out bursting and without movement. Then you draw the thick rubber band back bringing the projectile as far back as you can pull. This is complexity for me. Wait. Before you say I’m nuts, hear me out.

The pulling back of the projectile represents the complexity at its start. Flavors become subtle as they are pulled back from the center line of the sling shot. Not quite background music, but nuanced and seemingly in the background.

OK. Now you can call me nuts. But the sling shot effect is what I think of when a cigar that is muy bountiful in the flavor profile starts its journey on becoming complex.

I’m at the halfway mark. Flavors are becoming richer and deeper in intensity.

The last third begins and this is a great cigar. The complexity reaches its pinnacle and stops. The balance is good. The finish is long. But it is not like the magnificent Curivari Buenaventura. Which is cheaper, by the way.

If you want a single place to buy this line of cigars, Atlantic Cigars is the only place I’ve seen that has them.

I snip the cap to get rid of that nasty cracking. And I don’t do further damage. The cigar is nice looking now.

The flavor profile has not changed. It is in the same order as earlier. The only difference is the intense boldness of the flavors at this late stage of the burn. 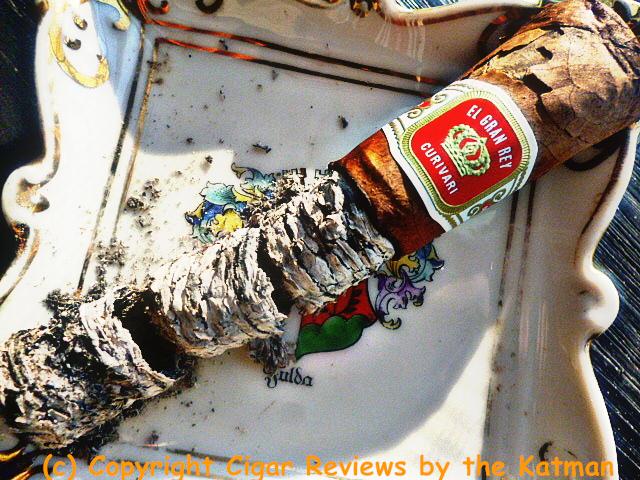 It goes without saying, I highly recommend this cigar. It is one of those rare cigars worth every nickel of its $7.00 price point.

The body is notated as full. From the start it never got higher than medium bodied. Here, with only 1-1/2” to go, the strength climbs to medium/full. It is going to require a nubbing to get the benefits of a full bodied experience.

The nicotine begins it rise to my demise.
The stick finishes out for me cool, not a bit of harshness, and uber flavorful.
Thanks to Atlantic Cigars. 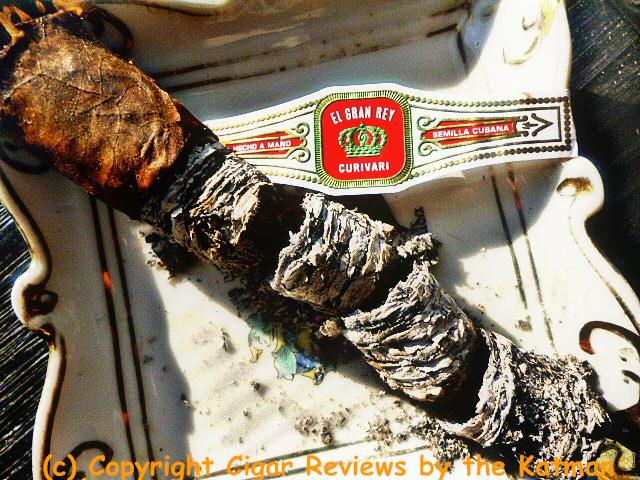 I hated playing for the Hell’s Angels. But they paid well, and often. And Todd Hart, who lived the life of a struggling musician, never said no to a paying gig.

So when the HA’s made us their official Arizona band, well wasn’t that just fucking peachy.

Their toys for tots drive is the biggest scam since Bernie Madoff. It is an excuse to have a really big hoe-down. And sell drugs to each other.

I wore my Blues Brothers type of jacket, with rolled up sleeves, which covered up my Glock 30 .45 cal pistol I kept in a holster behind my back in the Iliac crest. I wasn’t going to die for lack of shooting back.

The Christmas thing was a big bash where the bikers collected loads of 25 cent toys and put them in burlap sacks where they ended up mostly broken.

They then hired a nice joint out in Scottsdale and did it up right. The band had to get there a bit early to set up and sound check.

Our families were invited as all their little demonic children would be there too. So my wife Charlotte, and daughter, Katie came with me. They had done a very nice job of decorating this expensive sport’s bar with a huge banquet room in the back with a view of Superstition Mountain and the desert.

We were standing there when the sound of thunder erupted.

500 Harley Davidsons came roaring to the restaurant. The earth actually shook and my daughter began to cry and said she wanted to go home. Me too. She was around 12 then. I was around 48.

I’ve never heard a sound like that except what I could imagine if I sat behind a 747 while it took off.

In between sets, the head honcho got up on the stage and called out numbers from the tickets handed to every person there when they entered. It was long and tedious raffle with too much swag to give away….and each break lasted a painful hour.
But here is the jaw breaker…this guy used the most foul language I’ve ever heard from a public speaker. Not only was it foul, it was dirty nasty.

But at the rate, this was going; my wife preferred to leave and come back and get me rather than allow our daughter to hear this horrible diatribe that this asshole was spewing.

I took a look into the huge box where all the toys were collected. It resembled Chinese toy factory rejects. I’m not kidding when I say nothing in that box cost more than a buck. And for years, the HA’s were getting all sorts of props from the media for doing this. Probably due to the media was afraid to do anything else but report positively.

And since it is legal to wear a weapon openly, every single HA (and there were at least 500 men there.) wore a gun and a big knife. Every single one. If an argument broke out, it was the Battle of the Bulge all over again.

Todd would always have a doob on him and during breaks he would go outside and fire it up. I told him not to do it at these Hells Angel get togethers. You just had to know there were undercover DEA agents in the gang. And somewhere, someone was taking photos. But you didn’t tell Todd anything. He was the king of his own universe.

After the gig, I told Todd I would never do another Hells Angel gig again. We argued for a bit and then I quit the band after two years of playing together.
C’est la Vie!

The Todd Hart Power Blues Trio. Todd up front on guitar. Me on far right with ball cap playing my electric Dobro upright bass like a bass guitar. Oooh..my aching back: 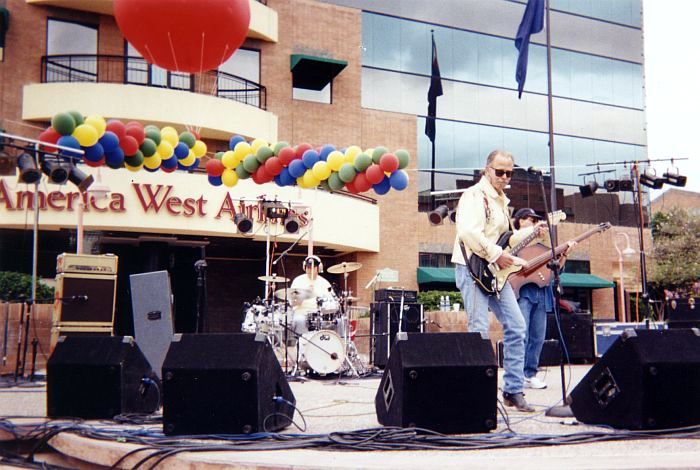