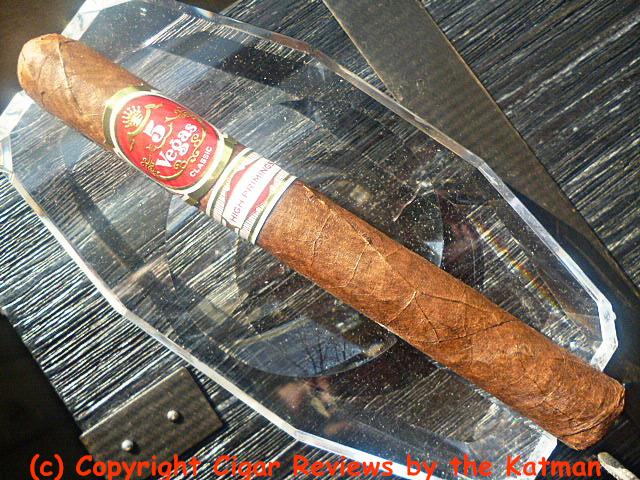 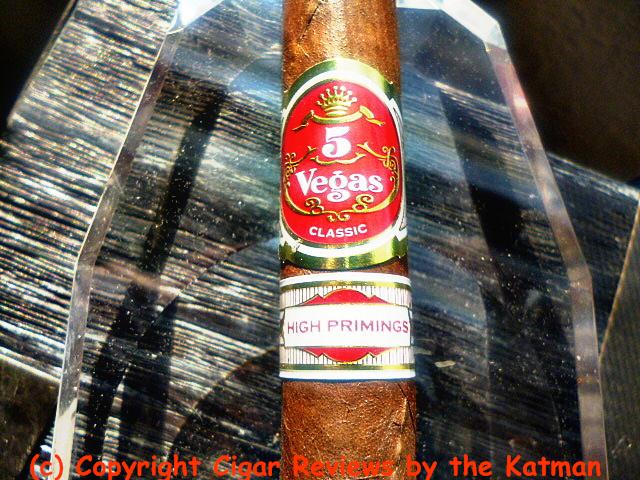 I am currently stuck in the torturous wait for cigars to be ready to review so, instead, I go to my “gift” stocked humidor and grab something to review. I have only one of these sticks and have never smoked one as 5 Vegas is not my cup of tea.

Now this cigar is touted as a powerhouse in the 5 Vegas line up. We shall see what we shall see.

Construction is excellent with tight seams and lots of small veins. The single cap is expertly attached. The wrapper is a mocha chocolate color and feels very sandy.

I clip the cap and find aromas of rich sweetness, cocoa, cinnamon, coffee, cream, peach along the shaft, and spice.
Time to light up.

It starts off with a punch of spiciness. Black pepper. The draw is spot on. And the flavors begin to roll in: Sweetness, cocoa, coffee, wood, leather, and something fruity.

An online store commissioned me to review their entire stock of 5 Vegas cigars. Every single blend in every single size. And I was to do it on their web site in the customer review section. I also had to pretend I was someone different each time. You have any idea how that can make a person crazy in the head? On top of that, he wanted the reviews quickly. So no time for humidor aging. I just made shit up. I was more concerned sounding like different people than making up shit about the green cigars.

But after that experience, he dumped me. Never even got to the good stuff. He yanked my dick on that one. He told me he was doing it alphabetically. So the numbers came first. After what seemed like forever, I was ready to move on to the good cigars and he stopped communicating with me. I’d love to tell you which online store but I can’t.

Well, the flavors are disappearing faster than your brother in law when the check comes.

Some sweetness remains at the 1” mark. Some wood and leather. And there you have it.
As far as the powerhouse cigar it claims to be? It is barely medium bodied at this point.

I have a shit load of house brands and the such in my “gift” humidor I’ve never smoked. A lot from Famous. First was the CI Black Ops which was such a disaster. And now this thing….I don’t know if I have the fortitude to review shitty cigars. I remember back in 2009, reviewing Famous house brands for them on my very own page they had given me and they were just terrible. Cigars that needed a lot of humidor time being reviewed within the same week of receipt. It was a friggin nightmare and we parted on bad terms.

Holts has a bunch of lousy cheap cigars made just for them. But I think Famous wins in that department. With the possible exception of JR and Thompson. But then I don’t count the latter online stores as catering to the real cigar smoker. Just guys who alternate their Swisher Sweets with Backwoods cigars.

This is a quote from CI:
“Due to the additional sunlight they receive and extra time on the plant before harvest, these ‘high priming’ leaves are thicker, darker, and provide additional flavor and ample strength.”

I’m nearing the end of the first third and the stick is near flavorless and not an iota of power. What a dog turd. And I’ve still got 4” to go. Lawdy, Lawdy Miss Clawdy.

5 Vegas is supposed to be CI and Cigar.com’s biggest selling brand. Oh, the horror.
Time has slowed down. But the char line is nice.
Tick tock. Tick tock.

I usually toss sticks like this way before now. But the Cigar Reviewer’s Union prohibits me from abandoning a cigar review just because I don’t like the cigar. I could lose my license. And then where would I be?

I think this is a joke cigar. The second third begins and the only flavor I can make out is a tiny bit of sweetness. Take me now, baby Jesus.

CI also said this about the High Primings:
“Notes of earth, pepper, cocoa and a semi-sweet, cherry-like note are backed by a creamy – almost buttery – tobacco core of toasty flavors.”
WTF?

I found a review from a reputable reviewer who followed the outline of flavor profile described exactly as CI wrote it. Exactly. I can’t tell you who it is but this guy loves to describe the flavor profile like it was a wood chipper spewing out every flavor known to man.

At the halfway point, the spice returns. The strength is classic medium body. This cigar got a 92 rating? Are you fucking kidding me? We all have our suspicions on how the CA rating system works. We just can’t say it out loud in writing or near a cigar manufacturer.

Ever notice that the uber expensive Davidoffs don’t play that game. Not a single rating from CA. Every wonder why? Their cigars are very good. Not all of them, but most of them. They count on word of mouth of wealthy golf players and bucks up Wall Street types to sell their cigars….not some rating shown in a catalog.

Oh my God! Flavors begin to emerge as the last third begins.

The spice has returned as red pepper. The sweetness includes butterscotch and black cherry. Oh no! I’m a clone!

Because I’m not paying attention, I get a huge canoe. I fix it. Half the cigar is gone now.

The strength is still medium.

That other reviewer says the cigar has a nice complexity. The only thing complex about this cigar as to how 5 Vegas gets smokers to buy them.

Some creaminess jumps aboard. Mind you, these adjunct flavors are very mild. Not potent or exciting. And not in this lifetime will this blend ever become a flavor bomb.

I don’t think I can finish it. I think you got the idea.

The flavors are muted.
The strength is wimpy.
There is nothing within its makeup that tells me it is a good cigar.