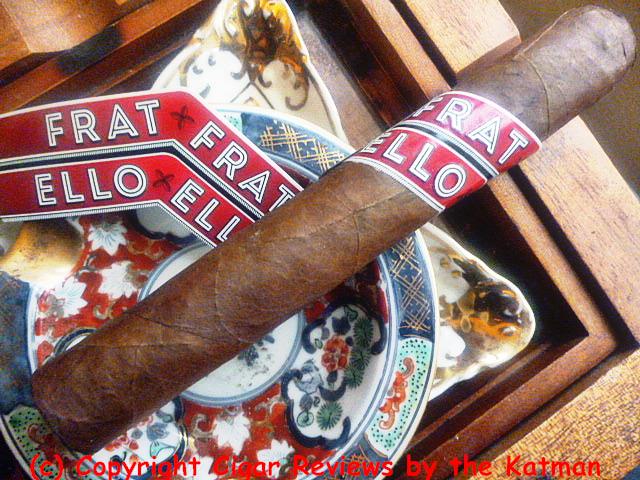 From the Fratello Cigars press release:
“Entrepreneur Omar de Frias is pleased to announce the launch of the Fratello cigar (label/brand). Fratello will compete in the premium cigar market. de Frias is test marketing Fratello at select stores in the Greater Washington DC area with an official launch scheduled for September, 2013.

“Fratello will debut in four sizes Corona, Robusto, Toro and the 6 x 60. Prices will range from 7 and 8 dollars. Produced in Esteli, Nicaragua, Fratello is a full-flavored cigar with a medium to full-body profile that is layered and complex. For more information about the cigars, visit http://www.fratellocigar.com.

“Fratello is a life-long dream for industry newcomer de Frias, a cigar aficionado for more than 15 years who grew up next to a cigar retail shop in his hometown of Santo Domingo D.R. “ I would come into the shop and the manager Don Rafael would always kick me out since I was not of age. One day he brought me in to watch a torcedor (Cigar Roller) perform his art, when he finished the cigar, he gave it to me and said, “Kid welcome to the true gentlemen’s club.” “Fratello, has been my nickname since college, means brother in Italian and embodies the true nature of this industry, camaraderie, family and friendship,” said de Frias.

“Omar de Frias, is an ex-professional basketball player with a love for cigars. Originally from the Dominican Republic, de Frias has worked for NASA, Baxter Healthcare Corp, and earned an MBA from the University of Puerto Rico. He spent two years defining The Fratello Cigars line and perfecting its blend. He resides in Northern Virginia with his wife and two kids.”

You can visit Fratellocigar.com for more info on the cigars and Omar.

Currently, according to the Fratello web site, 189 B & M retailers across the country carry his cigars.

I want to thank Mike at Cigar Hustler for the kind use of the box photo and the cigars. Mike is a good guy and you should swing some business his way.

The construction is excellent. Nearly invisible seams. Few veins. A beautiful triple cap. A nice oiliness and sandy to the touch. There is a bit of mottling. And the wrapper has a red tinge.

I clip the cap and find aromas of very spicy pepper, cocoa, coffee, earthiness, and a bit of fruitiness.
Time to light up.

We start our very spicy. Ha cha cha. There is a nice mocha latte happening. The draw is great. 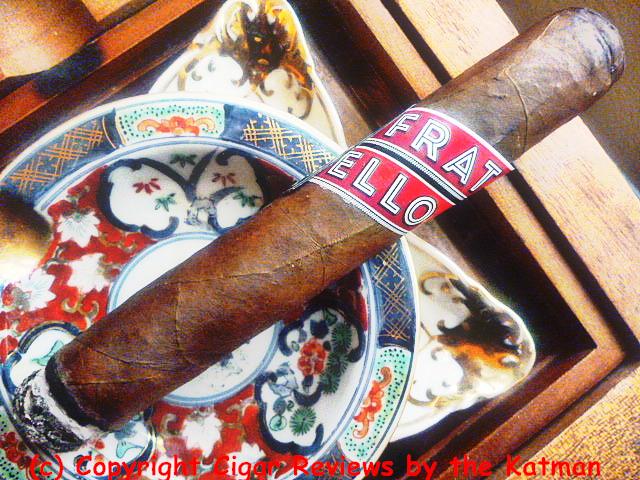 Very soon after, the cigar goes all creamy on me. Or as Robert Plant sang:
“Squeeze me baby, till the juice runs down my leg.
The way you squeeze my lemon, I’m gonna fall right out of bed.”

Yes there is a bit of lemon citrus in the ever growing favor profile. Cedar joins the group.

A very meaty component enters. It is hickory based even though it is not fire cured, I can taste that BBQ campfire faintly. A nice counterpart to the other flavors, which are: Creaminess, spice, citrus, cocoa, coffee, cedar, meaty, and a rich earthiness.

Omar did something very interesting with this blend. It stands out from the crowd of Nicaraguan based blends. With each puff, the lemon drips even further down my leg.

The cigar is jam packed with tobacco and is a very slow burner. I am nearly at the end of the first third and it has taken me 30 minutes to get there. Packed but the right amount of give when squeezed like a banana in my manly hands.

Which by the way, I remember a Led Zep story from back in the day that will accompany this review nicely. (Do I hear groans in the background?)

The second third begins with a new flavor: a whole lotta sweetness. This makes the whole flavor profile pop and it is this element that was missing from the first third. It brings cohesiveness to the other flavors now. 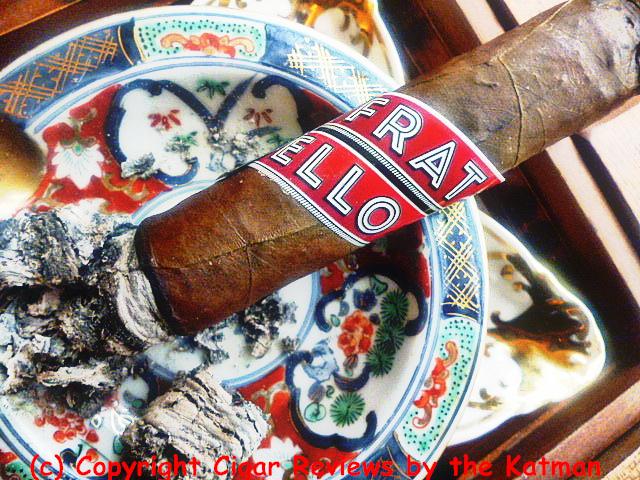 The cigar hits flavor bomb status as the second third begins. It just explodes with flavor. One coming at me faster than another. I love this cigar.

$7.00? Worth every dime. Especially, since it is such a slow smoke. I am guessing I will get a good 90 minutes from this stick.

I am at the halfway point and this cigar is a boomer. I want to suckle on the teat of this cigar and let it cuddle me to sleep.

Man, this stick is good.

The last third begins. Up until now, the stick has been medium bodied. But now…we move up to medium/full and the nicotine kicks in. Oy. I feel drunk.

It’s taken me a little over an hour to get to the last third.

Here is the flavor profile, in order: Creaminess, spice, cocoa, citrus, wood (the hickory is gone), cedar, coffee, and leather.

The cigar is extremely complex now. So I weave back and forth in my chair from the nicotine.

Not only is $7 a fair price point, I can say that I’ve had more expensive sticks that are not this good. Omar is a fair man.
The cigar cruises on its own now. Flavors are pumping. The nicotine is making me hallucinate. And the stick is delicious.

The construction has been near impeccable. Only one minor touch up required for the burn line. And the cap has behaved itself. And NO cracked wrapper. I should tell you that this is exactly how a New Breed Tattooed One would blend a cigar. I’ve only had these sticks for a week or so. No extensive humidor time for this blend.

The cigar finishes out bursting with flavors and strength. The balance is great. And the finish is very long and chewy. Like me. My only personal criticism is that I don’t handle nicotine very well. And it seemed to have kicked in pretty early. So I am a wreck. But a happy wreck.

Thanks Mike and Cigar Hustler.

Led Zeppelin. If you’ve read this one before, carry on with your day.

Every time we made the crossing of the English Channel by ferry, I got sick as a dog. That is some of the roughest waters in the world. It is where the North Sea collides with the Atlantic Ocean…and it ain’t’ purty.

The shortest ride, which most tourists take, is the 2 hour ride, or so, from Calais, France to Dover, England. The only thing you have time for is to stand on the deck, in line, waiting to get your passport stamped. And the boat is a’ rockin and a’ rollin and people are puking all over themselves.

The other way to cross the channel is from Southampton to the Hook of Holland. That is around 7 hours and an overnight journey. You get a cheap stateroom with a bunk bed because Miles Copeland III was a real cheapskate.

After the second crossing with the band via Dover, I told Miles I have to leave early with the roadies so I can play that night and not be white as a ghost.
He agreed. What a guy!

I went to a doctor who gave me some tranquilizers.

I rode with the roadies in the 18 wheeler to the ferry. It was just the basic core of the band’s road crew: Beric Wickens and Moray Smith. These were fun guys. The rest of the roadies would be provided by the Dutch office of BTM Records. Cheaper that way.

The instructions on the way to the boat were this: “Take yer lazy pills, get yourself a good meal, drink a pint or two, and then go to bed. And always remember to roll with the boat. Don’t fight it. Roll with it.”

While we waited on the dock for the OK to drive the semi into the ferry, we stood around and watched as a taxi pulled up. It was the main crew for Zep. Five of them. They were in charge of everything.

My roadies knew Zep’s roadies so we kibitzed for a while. Maybe a few minutes. The taxi hadn’t left yet.

One of the roadies was unloading stuff from the trunk. The head roadie had his own tool chest that he didn’t allow in the many 18 wheelers that Zep used. He had them stolen once so from that point forward, he kept them with him.

He winked at his comrades and they began to dismantle the taxi.

The driver protested but the Zep roadies were huge! So he stood by and watched in terror and fear.

Doors, hood, trunk lid, windshield, and part of the engine lay on the ground next to the taxi. This poor driver was in tears.

Me and Beric and Moray stood by and laughed and just could not believe our eyes or senses. It turned out that the Zep roadies took a couple doses of acid before they left home. So at that point, anything goes.

It was time to load the trucks. The head Zep roadie handed the taxi driver a huge wad of cash and thanked him for his time.
We got settled in out tiny state rooms. Then we went up for dinner in the first class dining room. No one said no to my roadies. They were huge as well.

They served the food family style. Everyone sat at long tables and huge bowls of food was passed around.
The Zep roadies sat with us. But so did some very wealthy civilians. They thought it was cool at first.

I did as they instructed and had a huge tankard of ale. And I don’t drink. I was completely shit faced.

The boys guided me to my cabin. They helped me undress and I climbed into one of the bunks.

I followed instructions and rolled with the monstrous waves all night long. Not getting nauseated once. The boat docked around 7am.

I got up, had breakfast, and we were on our way to the Paradiso Club in Amsterdam. A little more than an hour away.

The best part was that the rest of the band would not be there for another day. So I had Amsterdam all to myself. Great town back then. The roadies and I spent most of our time at the Paradiso listening to live music during the day and smoking hash til our gills were filled. 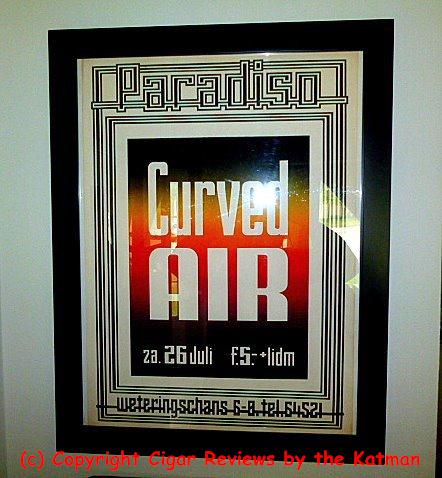