I want to thank Jason Harding of BestCigarPrices.com for sending me these cigars.

This is a cigar I discovered a couple years ago and have tried to keep both the Habano and Maduro versions in stock when possible. This is a great little blend that is satisfying and cost effective. But I noticed that while I have written about the Maduro here, and the Habano for others; there is no trace of this blend on my Katman blog. So here goes.

Abe Flores does it right by using the Entubado method of rolling the cigar; that is, rolling tiny tubes the length of the cigar and bundling them together to create a more sophisticated smoke by allowing for better draw and near perfect burn.

From PDR web site:
“PDR’s first release from the 2012 IPCPR was our Flores y Rodriguez Habano Cabinet Seleccion. It’s our third Dominican puro that we have produced. A fun fact that we like to share regarding this blend, all components wrapper, binder & filler tobacco is from one Cuban seed Habano from Vuelta Abajo Cuba that was grown in the Dominican Republic. Available in two blends Natural and Maduro. The natural blend is a straight forward medium body cigar with a touch of sweetness and a soft cedar flavor.”

Tamboril is referring to the town, in the Dominican Republic, where the PDR Cigars factory is ensconced.

It is a sunny day on its way to a rainy one later here in Milwaukee so I lucked out. The brilliant sun shows a glistening wrapper oozing oil that is silky smooth. The wrapper is the color of melted caramel. A darker mottling permeates the wrapper giving it a nice brindle look. There is a pattern of veins that is actually attractive as the rollers took care to give the cigars’ outer clothing the look of being wrapped in a perfect tobacco leaf. The triple cap is nicely done. The cigar band is simple and nice.

I clip the cap and find aromas of earthiness, nuts, leather, cinnamon, mint, strong spice, and the slightest touch of a vinegar based creamy Caesar dressing.
Time to light up.

The first puffs are sweet with the slightest touch of woodiness. Almost bark like. A nice black and red pepper begins to form. The cinnamon reminds me of those cinnamon dunked toothpicks we’d buy as kids. Started off nicely and the got hotter ‘n hell. 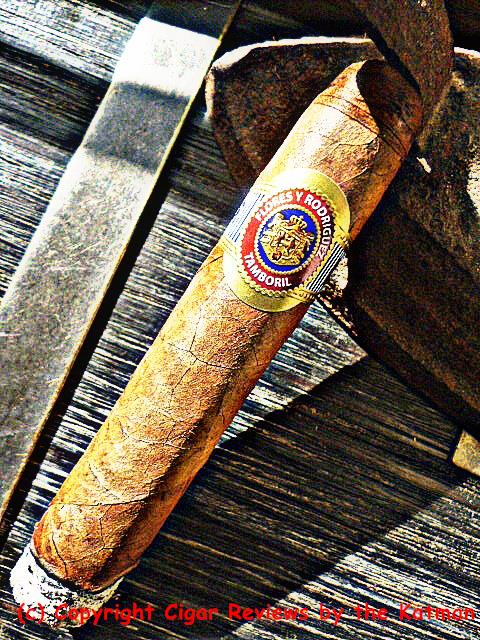 I’ve had this last cigar in my humidor for several months and is my last for review. More on that later.
A lemon zest element appears offsetting the sweetness with tartness. And then a subtle herbal note shows up rounding out the flavor profile.

I have to admit that while I have spent considerable time smoking both the Habano and the Maduro, the Maduro is my favorite of the two blends.

The strength is a light medium body. The Maduro is more of a medium/full body. And sweeter. 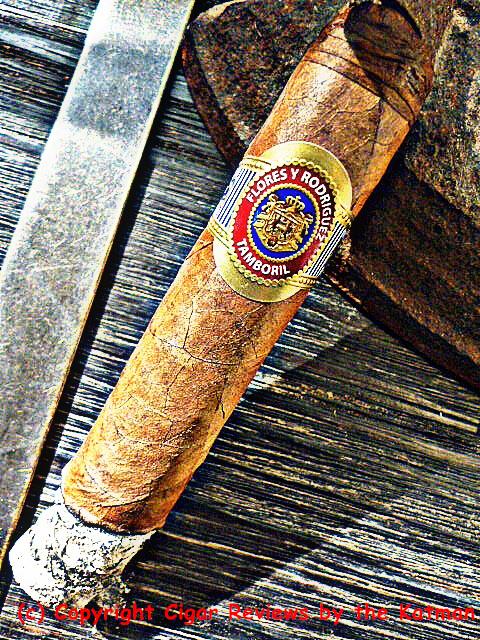 The flavors begin to build now. As predicted. Becoming much more than subtle. This is the Flores y Rodriquez I love.

The strength has moved to a strong medium body.

The char line has behaved admirably throughout.

The sweetness overcomes the creaminess. The wood and nuttiness make a surge. The pepper is all but gone…taking with it most of the cinnamon. The citrus is still present at a very high level.

The classic rock station on my cable outlet plays just what I like. None of that hack that the public airwaves radio stations play. More album cuts than the Top 10 of classic rock. What would we do without music?

And I want to thank all the lovely readers who have shared their stories of loss when it comes to parting with a beloved instrument. You have to be artistic or creative to understand what it means to lose the instrument of that artistry sooner than you planned. Thinking back of all the wonderful music played on that instrument goes a long way into the memory banks. All the fun, creativity, and crazy stories associated with it fill up a scrap book in your head. 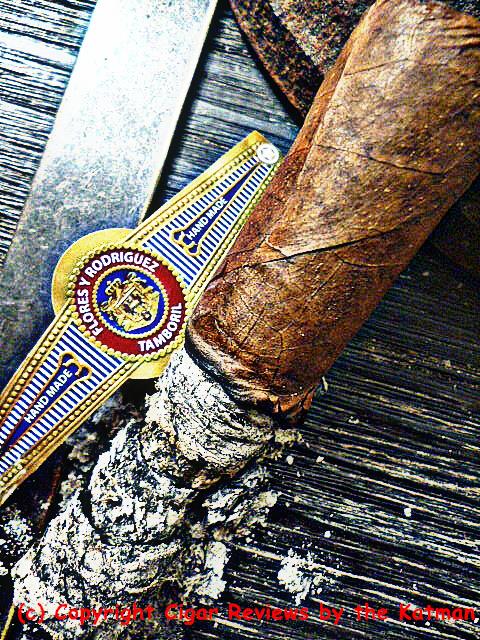 The cigar is now a creamy sweet vessel for flavors of cinnamon, citrus, cocoa, wood and nuts, some red pepper, and earthiness. This is not a “kitchen sink” flavor profile cigar. It focuses on just a few elements.
Strength is hanging tough at medium body.

But flavors are expanding as the last third is reached. I’ve had this cigar a long time. There is a fine line of extensive aging to get the most out of a cigar’s flavor profile…and leaving it to age too long and slimming down all the wonderful flavors to something narrow like a flattened straw.

Ahhh…the station is playing Dylan’s “Like a Rolling Stone.” I remember this like a snapshot in time. I was in the car with my mother. I was 15 and this song came on the radio. My mother made a face like she had just sucked on a lemon and asked me, “WHAT is that???”
I laughed and turned it up. Then upon returning home, I picked up my 5 string banjo and proceeded to play it while sitting on my bed. I had bought the sheet music at Wallach’s Music City in Lakewood, CA. Or was it Long Beach? I can’t remember. It was the store that carried everything music. Even those booths that they allowed you to take a record and go listen to it for a while before purchasing it. Right out of “That Thing You Do.”

The last third of the cigar does not disappoint as it makes flavor bomb status.

Here are the flavors: Very potent citrus, sweetness, creaminess, wood, nuts, cocoa, earthiness, a renewal of red pepper, leather, and something new: summer fruit like peaches or nectarines. With a dash of black grapes.
From this point forward, flavors escalate like a stairway to heaven.

The cigar finishes out beautifully. No harshness or heat. A perfect char line. Lots of balance and complexity. A long finish. Medium bodied without a hint of nicotine. A perfect cigar for enthusiasts and newbies alike.

The price is crazy. I would pay $6-$7 for it and not blink an eye; especially the Maduro version. This is one of the best deals for the price out there.