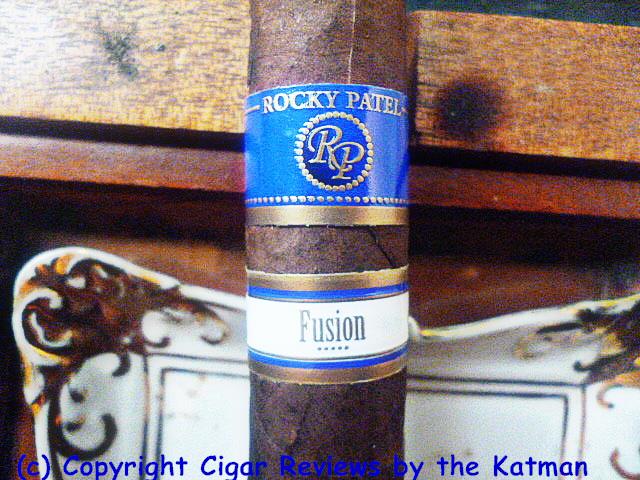 Before we take a look at the Rocky Patel Fusion, you should know this about the cigar:

“This one should bring back memories. And depending on whom you ask, some recollections remain fond….others not so much.
“The original concept behind Fusion was to fuse the tastes of the RP Vintage ‘90 with the RP Vintage ‘92. A genius concept that wound up yielding some….errr interesting results. But if you’ve ever taken 3rd grade science, you’ll know some things just don’t mix well.
“That’s why this round Rocky decided to stick to what he knows best. Just making a good cigar. And this time, I know people are gonna dig it.
“Rocky Patel Fusion is a lavish, flavorful blend that is carefully hand-crafted utilizing a Cuban-seed mixture of aged Nicaraguan long-fillers. Cloaked in a carefully fermented Ecuadorian Sun Grown wrapper, this medium to full-bodied cigar exudes rich notes of wood, spice, and leather while allowing a sweet tobacco flavor to shine through.”
That was from Cigars International.

So Rocky Patel gave up on merging the Vintages ’90 and ’92 and just came up with another blend altogether. How Patel.

So, this being the case, all of the previous reviews are now wrong as the leaf blend is totally different. Flush!

Not many of us are Patel fans. The man is a cigar whore. I’m sorry, he is an ex-entertainment lawyer. Having spent 10 years in the music business, I discovered that those fuckers caused more problems than a toilet full of scorpions.

This stick was a gift from a reader and has plenty of humidor time on it as it is still an old school blend.

Went back to my pain doc and he is going to insert an implant into my hip that will electrically stop the pain from my low back and down my legs to my feet. No way I could afford it if my Medicare Part B hadn’t kicked in on July 1.

If that happens, I will never get my dog’s nose out of my ass.

Construction is excellent. Except for where the cigar got a little beaten up near the cap. Always trim your nails before you go digging around in a full humidor. It is a real pain in the ass moving your cigars from the bottom of the humidor to the top. I always nick a stick or two and don’t find out about it until I decided to smoke it.

The wrapper is very mottled with a dark and semi-oily coffee bean color. Seams are near invisible. Very few veins. An exceptional cap. Can’t tell how many but guessing there are three.

The draw is good. Some immediate sweetness. I don’t like torpedoes. That pointy end feels like a thermometer in my mouth.
Lots of smoke. And then that dark bittersweet chocolate. Wow. That’s good stuff right there. 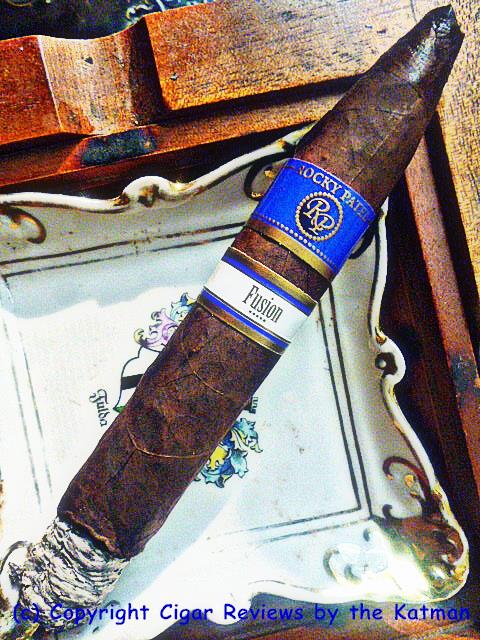 I smoked the other one a reader sent me the other night. Either it was two different readers or one was aged longer than the other because it started with a huge blast of red pepper. And at the moment, there is none on this stick.

Goddam the pusher man! Fucking Patel. His sticks are so old school that he probably learned to blend a cigar from the school marm from Little House on the Prairie. At least half or more of his blends are inexpensive; especially all those house blends he churns out like Russian plutonium…and still takes 6 months or longer to taste half way decent.

I will stick it out until the halfway point but if the cigar gets no better than the first inch, it’s OUTTA Here!

It is kind of funny when you think about it. Patel got rid of the combo version blend of this cigar to go with different “better” blend and this one ain’t any better.

Well, the cigar is pretty flavorless at the moment. The char line is very good though.

Now that I think about it…er…wait…I’m not very good at thinking so never mind.

You wanna see a photo of my giant open pustule on my leg?

The cigar begins to pick up a bit. Cocoa is still the only flavor. But there is a bit of nuttiness, cedar, leather, and a touch of creaminess with some red pepper finally showing off its shy ass.

I just snagged my budget for cigars at Small Batch Cigar before I started this review. Thank you, Social Security check. It’s not a lot and won’t put me on Easy street, but it’s a start.

Since Atlantic Cigar banned me for life because I told my readers the kind of great deal they could get on cigars by joining their VIP Club, it has been impossible to get the new stuff by the single cigar. Everyone sells 5 packs and nothing smaller.

At least of the new stuff. I really don’t like Atlantic Cigar. I try to help them and they get in trouble with My Father because some asshole brought it to Atlantic’s attention I was publicizing the VIP Club discount. Yeah, it’s my fault. All My Father had to do was spend $60 on a membership to see that Atlantic was selling their wares below My Father’s fixed price. Yeah, that’s my fault.

Waiting on this fucking dog turd to kick in. 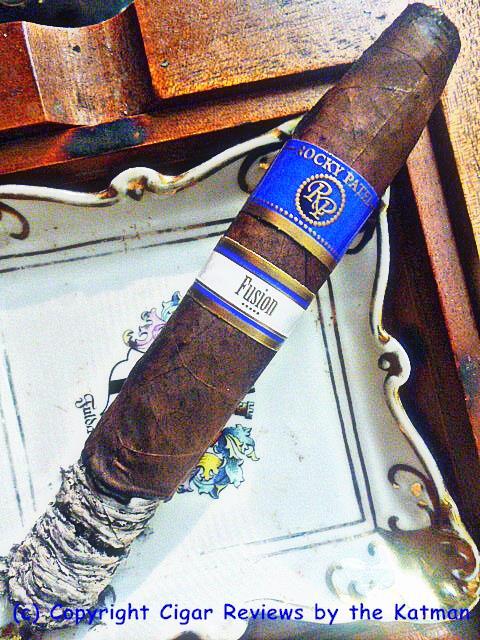 You know, I curse a lot. Between playing music and a career in commercial construction, I was fucked from the start.
OH NO! FLAVORS!!!

A sip of Diet Coke brings out the soda fountain aspect to the cigar’s flavor.

The construction of the cigar is doing very well. Nice char line. The cap is hanging tough under the strain of my chomping. And no wrapper issues.

There are close to zero reviews of the new revamped Fusion. They all go back to the 2008-2009 version. And they describe a cigar not that different from this one: So So.

And then as the second third begins, things happen. It is very close to becoming a flavor bomb out of nowhere. The creaminess is very strong. The cocoa is dripping like a hot fudge sundae. The red pepper is now very strong.

And the strength is about to become full bodied. And the ugly nicotine shows itself for the first time.

I know for a fact that this particular stick has had several months humidor time. So remember children…that when you buy Patel, it is an investment of time.

The Rocky Patel Fusion how has a well rounded flavor profile. Nicely balanced with a long finish. And a new flavor is upon me: a luscious gooey caramel.

The green-ness of the bell pepper is an odd flavor but the veggie flavor complements the cigar nicely.
Sweetness makes a big surge. So does the nuttiness. It also becomes very toasty.

I suppose that another 3-4 months of humidor time would properly age this cigar on top of the several months it already has on it.

The one I smoked yesterday that started out with a huge blast of pepper must have had that extra few months on it.
I have to admit that I am now digging this cigar. It is clearly full bodied now. A strong cigar that has a bit of Illusione in it.

I absolutely guarantee that all those old reviews that didn’t care for the cigar (which was most of them), didn’t give the cigar its props with enough humidor time. Or maybe it just stunk.

I am nearing the halfway point and the cigar is kicking my ass. So I take this time to glue the errant piece of wrapper near the cap that I must have nicked with a finger nail.

OK. I must eat my words. The Rocky Patel Fusion is a hellaciously delicious cigar now.

My only disappointment is that I smoked the wrong cigar for the review. Last night’s stick is the one I should have reviewed because the great flavor profile came early in the cigar.

I’m really lousy at keeping track of my cigars. I think it is Christian Logay who sent me some cigars over a year ago. He has this method of cutting back the cello and then marked the date he got it right on the cello. I believe it probably elongates the aging process but I can’t argue with the method.

The last third is in full swing and so is the nicotine. Patel’s PR machine should have described this cigar as full bodied, not medium/full.

This last third is going to kill me. Like some of my beloved and loyal readers have told me, that like me, they have never smoked a cigarette. I’m sure it has a lot to do with one’s tolerance of nicotine.

Sometimes, I write my little rock n roll anecdote the night before the review. I should have done that with this cigar because all this nicotine makes me really dumb and it is next to impossible to write a story soaring on nicotine.

The errant piece of wrapper is now snugly in place. I use Kingpin glue for fixing wrappers. You will have to Google it. But it is the best stuff out there and only costs around $2 for a bottle that will last a year.

Strangely, the spiciness comes and goes. (It took me almost one minute to type the word, “and” because I no longer have any motor skills from the nicotine.

As good as the cigar tastes, it never really becomes complex.

I can only recommend this cigar based on your willingness to let it hibernate for 6 months or longer. I don’t see it as a big improvement of the earlier blend.

It is not very sunny out so my photos don’t recognize the oiliness of the wrapper.

The Rocky Patel Fusion is just another cigar blend in a long line of average cigars that Patel is so famous for.
Lastly, the price point. The cigar can be had for half the price on Cbid. 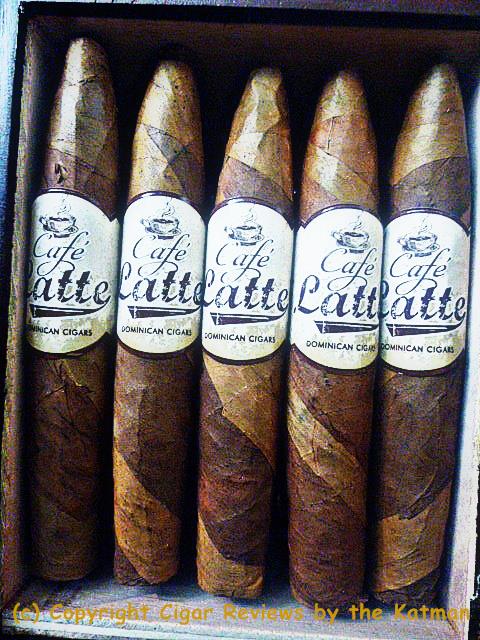 And now for a reminder:

Win a 20 Count Box of Café Latte from Stogie Boys.

At the end of the Café Latte review, you can enter the contest by simply stating, in the comment section, why you love cigars. What place does cigar smoking play in your life? Simple. Feel free to expound on that premise.

The winner will be chosen on Monday, August 11 at 3pm CDT.

After choosing the winner, I will announce the name of that person in an addendum to the post at the top of this page.
You have 72 hours to make contact with me to claim your winnings. If I am not contacted within 72 hours, a new winner will be chosen.

Only one entry per person.

GOOD LUCK TO EVERYONE!!!

P.S.
Anyone who starts their entry with, “I don’t normally smoke flavored cigars but since this is free, why not enter?” They will be dumped in the trash. LOL!