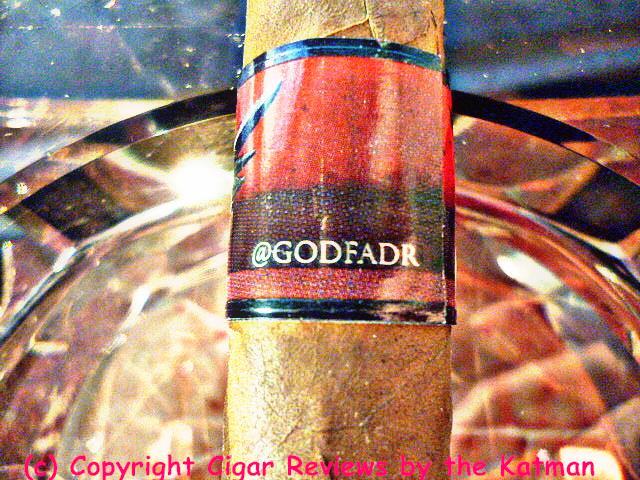 Today we take a look at the Nomad Classic.

The company was launched in 2012 by Fred “GodFadr” Rewey.
It is a regular production cigar and distributed by the House of Emilio.

From the Nomad Cigar web site:
“This is the line that started it all.
The Nomad “Classic” set out to be a cigar that was deep in the roots of Dominican culture.
Starting with the original “Fugitive,” the line quickly grew to six different production sizes.”

“Let’s face it. Blending is an art.

“I really wanted to push myself on this blend. I kept trying to add layer upon layer of complexity all the while making sure the flavors married well with each other.

I bought a bunch of singles from Cigar Federation so I’d have some cigars to review.

I clip the cap and find aromas of dark chocolate, spice, sweetness, fruit, cedar and leather.
Time to light up.

The draw is good. The chocolate swoops in. Then a blast of red pepper, nuts, toast, and something fruity. No. Not me.

I really had to boost the humidity in my humidor. I doubled up on everything and have been throwing blankets over it at night. It is 8° right now at 8 am. Going up to 27°.

The frozen nights are wreaking havoc with my cigars.

Every cigar I smoke has a burn issue at the start. So does the Nomad Classic but I nip it in the bud…hopefully.
Wrapper cracks begin to form. Damn the Wisconsin weather.

The Nomad Classic sits in the ashtray and I listen to snap, crackle, and pop sounds infuriating me. This is not the cigar’s fault. I just can’t keep my stash warm in a 2 story house with a full basement.

This is a shame because my gut tells me that the weather is going to destroy the cigar before I can finish reviewing it. Just keep that in mind that the lousy construction is Mother Nature’s work, not the manufacturer.

I’ve had the cigar just about 3 weeks. I bought several double sticks from Cigar Federation and all are in fine fiddle condition and ready to review. The one delight about boutique blends from both CF and House of Emilio is that they take little humidor time to be ready to smoke. Letting them rest also has its magic qualities.

I smoked the first Nomad Classic several days ago and it behaved like a champ. No wrapper issues. Plus the flavors were out of this world.

And just as I finish that sentence, the flavors explode. I was about to say that I was surprised the Nomad Classic hadn’t become a flavor bomb yet. It is on the verge with 2/3 of the cigar to go.

The list of flavors has not changed except that the chocolate, toastiness, nuttiness, and sweetness have trampolined into the Mesosphere.

Bam! We have touch down. I loved the Nomad S-307 which I reviewed in April of this year. And I had high hopes for the Nomad Classic.

The chocolate and nuttiness morph into Nutella. While it is fairly new to the US, I ate it all the time when I lived in England in the 70’s. They even make a sugar free version.

I am conflicted about taking photos. The area between the cap and the foot is a mess. It is not fair to Nomad Cigar Co. to show their product in disarray when it is not their fault.

The Nomad Classic finds its complexity and balance. The fruitiness begins to spread out with a larger parameter. I can taste cherries, a bit of yellow melon, red grapes, and dried mango. Very nice.

The Nomad Classic becomes very leathery and complemented by the sweet cedar.

The strength remains at medium body as I hit the halfway mark. 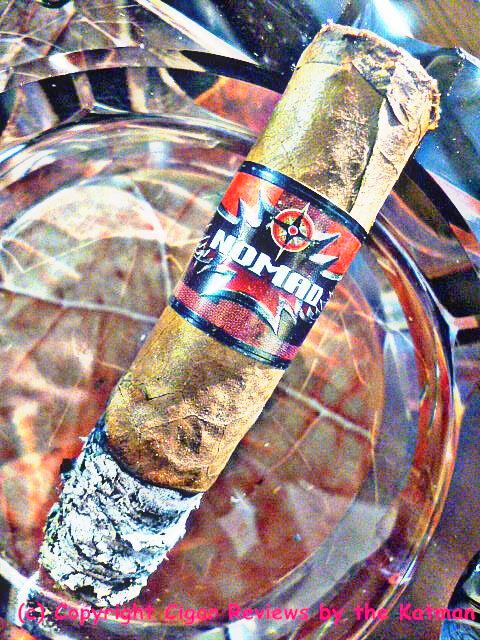 I take a few minutes to read my Nomad C-307 review and while there are definite similarities, the C-207 seems to be a much stronger blend.

Nomad Cigars designates the Nomad Classic as a medium/full blend but I am not getting that fuller body.
The price point.

Too much dough. If you take a look at “The Katman’s List of 117 Great Cigars in the $5.00-$6.50 Range,” you will find cigars just as good for a lot less. I understand that the small boutique brand has bigger expenses than the big manufacturer. It is the boutique blender’s albatross.

The wrapper issues finally subside with less than 2” to go.

I guess this review won’t be posted on the Nomad Cigars web site.

The Nomad Classic actually hits its sweet spot in the last third. It has an extraordinarily long finish.

The complexity is so rich and earthy that it defies my limited understanding of the English language. Nice cigar.

I slow down so as to savor every moment.

Caramel shows up for the first time. Buttery smooth.

A real shame that for the first half of the Nomad Classic, the wrapper was drastically affected by the cold. The one I smoked the other night did not have any of these issues.

The Nomad Classic finishes at medium body. This is a very nice blend. I don’t really have any criticisms as it is very flavorful. 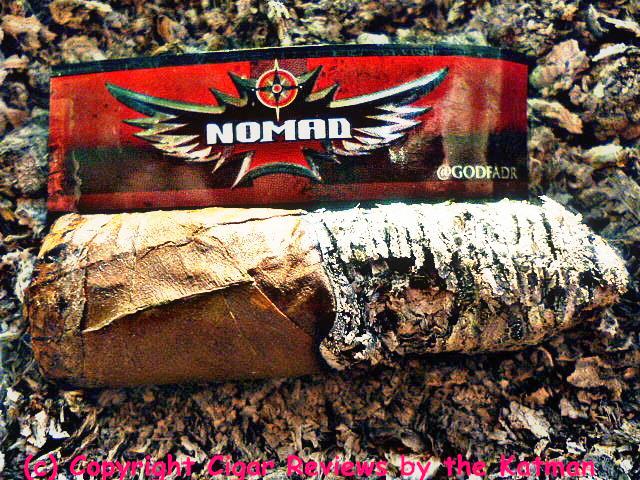 Butch was a handful. More than I could juggle with my recording studio and session playing. I felt sorry for him. He had a miserable young life. He had something like 5 mothers and 7 fathers. Divorce, marry, divorce, marry…well, you get it.

Plus his mother stole his earnings. This was before the Jackie Coogan Law. This is where the money was put in a trust until the child actor was 18 or 21.
So mom used the money for herself.

But it wasn’t much money. I can’t remember exactly, but Butch made either $400 or $600 per episode. That’s it.
He did a lot of 70’s TV shows after the Munsters which lasted only 2 seasons. Back then, they did over 40 shows per season.

His mother even stole the dough from his royalty checks. So Butch asked if he could have them sent to my house because he trusted me. Once I opened a check not paying attention to who it was made out to, and it as a $68 check for being in the TV show “Mannix.”

Butch had to live on those checks. He was like Moses in the wilderness. Except, without purpose.

I’m only 2 years older than Butch but I became his older brother. His S.O.B of a father.
His father died while Butch was with me. He had a heart attack I believe.

All of the father’s cronies ransacked the hidden safes and bank accounts minutes after he died.
But the man was still a millionaire.

Butch had a half-sister who was dating David Hasselhof at the time.

The funeral was something that Butch didn’t want to attend. I convinced him to go. It was his father and this was his one and only chance to pay his respects in a formal setting. If he didn’t go, he would regret it for the rest of his life.

It was a large cathedral and maybe 100 people attended. Half of which looked to be showgirls or high dollar hookers.

Afterwards, he told me he was glad he had gone.

A few days later, there was the reading of the will. The asshole father left everything to Butch’s half-sister. And not a single penny to Butch.

Butch went postal. He hated me for “making” him go to the funeral.

Butch’s sister was being pulled at from all directions and began to lose her hair. She was a mess from the stress of everyone wanting their “share.”