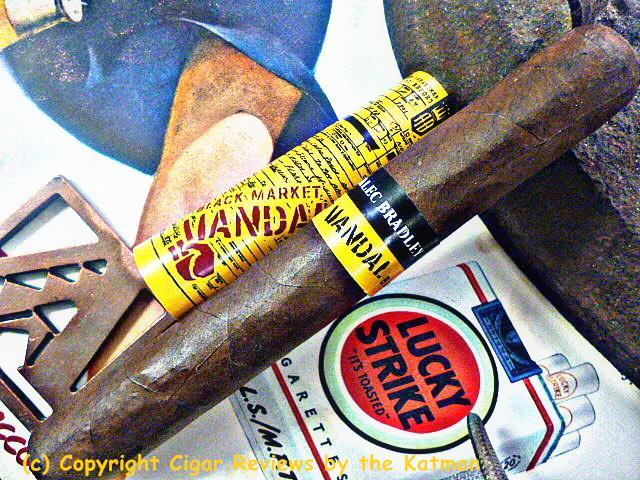 But I do so with a heavy heart. Not a single review out there. Not even from the big guys. Plus, the A/B web site has nothing on it. And the only two stores shown carrying it are CI and Cigar.com. I bought two singles from the latter.

So I wonder about one thing. In this new era of boutique brands sprouting like weeds, could the Vandal be an old school blend? To me, that is the only answer. So let us begin our journey where I will confirm that this cigar needs 7 years of humidor time.

Right away, it’s gimmicky. The bright yellow/gold “Police Felony Report” that wraps around half the cigar seems to follow other boutique brands that have already done this little circus act. I am in the process of trying to flatten it out so you can see it. Again, there is so little info on this cigar that when you Google it and the word pictures next to it; instead of hundreds of photos there might be a dozen or so.

I also wonder if this is a house brand for the Cigars International Military Industrial Complex only. I’ve yet to find other online stores carrying the Alec Bradley Black Market Vandal.

It is a nice looking stick. Tight seams. Lots of big bugger veins. A cigar that is actually “round.” A perfectly applied triple cap. And an oily, slightly toothy/smooth reddish brown wrapper. The cigar is hard as a rock with one soft spot beneath the regular cigar band. It has a nice give to it when pressed.

I clip the cap and find aromas of very strong spice, ginger bread, grass, cinnamon, a slightly smoky smell on the shaft, and barnyard.
Time to light up.

First puffs slam me against the wall with red pepper. Then some delicious generic sweetness. It is nutty and toasty. Peanuts. Perfect draw. Cedar, meaty, a vegetal element, and dried fruit.

Not a bad beginning for a cigar I’ve had for only a few days. With the kind donations I got, I basically bought cigars by the onesies and twosies a little at a time as they passed from Paypal to my bank account. And I don’t have time to allow cigars rest the way I normally would. I have to cross my fingers.

I’m pretty sure that I am getting that fresh rolled flavor that often arrives with a cigar recently removed from its cello. A few days of opportunity then back into hibernation while the cigar really matures in your humidor.

There is a brown mustard taste. No. Mustard seed. Mustard would have vinegar in it and I taste no such element.
3/4’” burned and creaminess joins the fold.

I hope that the Alec Bradley Black Market Vandal isn’t dumping all its flavors on me at the start then flat lines at the halfway point.

But so far, I like it. Alec Bradley has become one of the few manufacturers that smokers either love or hate. I read things on the cigar forums and find myself very surprised at the vitriol some people have to spew about the brand. I am sort of neutral. I like the American Sun Grown, The Lineage, the Nica Puro, the Tempus, the Coyol, the Mundial, and the Raices Cubanas. They are good cigars.

I always use a single torch lighter when I review. I bought an S.T. DuPont Maxi Jet torch lighter and it has been my most trusty and reliable friend. I have no luck with Xikar. They aren’t made to stand up to constant use. The longest Xikar has lasted in my possession is 5-6 months. Most only last a couple of months. I’ve returned more Xikars to Xikar for replacement than Chevy owners have taken in their cars and trucks on recalls.

The DuPont finally took a dump on me. The bastards want a receipt in order to honor their lifetime warranty. I don’t know what I did with it until I looked in my file cabinet. There it was. I won it on eBay on June 30, 2013. So there you buggers! I copied the receipt and sent it back. The small print on the DuPont web site says that is DuPont’s discretion on whether to fix it, send you a refurbished one or a new one.
But I need the damn thing for my reviews. I can’t use some big ol’ torch that scorches the wrapper. So I am using a BIC until my beloved Maxi Jet returns. Every time I say that, I think of tampons.

Back to the Alec Bradley Black Market Vandal. It is a real slow burner.

Caramel shows up. It is beginning to display the typical kitchen sink flavors of a Nicaraguan blend. So nothing extraordinary about it.

There is a mysterious flavor to me. The first time I tasted it was in the Ezra Zion The Collective. It is so unique and I haven’t read one review that describes “Factor X” to my satisfaction. It has just been introduced to the Alec Bradley Black Market Vandal.

I falter with trying to describe it each time I taste it. I have to call it the “Extreme Quality” element. I know. Stupid.

It is a combination of charred oak, savory, maple, brown sugar, black pepper, and a light smokiness.

Considering how fresh this cigar is; and how little humidor time I allowed it, I am very impressed with the Vandal. This blend is nothing like A/B’s other blends. A totally different direction. 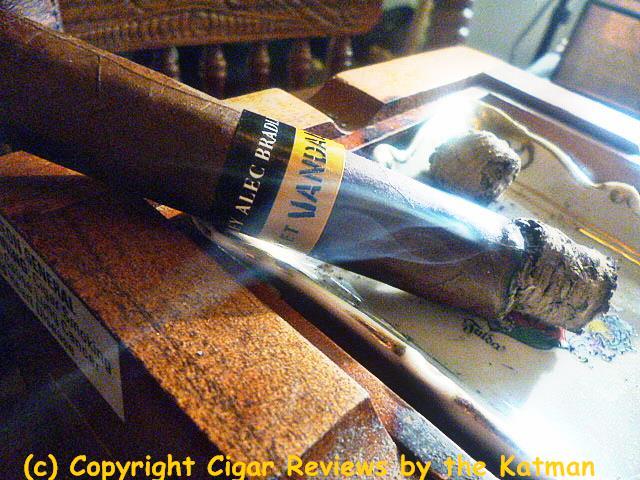 The Alec Bradley Black Market Vandal comes in this one size only and in boxes of 10. From where I am sitting, this is a good deal. Imagine. A brand new cigar that doesn’t cost $14.00. How absurd. Will definitely add this to some of my lists. Depending on how it proceeds, it might find a place in my Top 25 list. But I have a long way to go.

The char line has been excellent. A very solid built cigar.

A dose of coffee appears.

Strangely, for so much Nicaraguan leaf in the cigar, there isn’t a hint of chocolate. And the usual coffee level is minute.
Orange blossom. Citrus. Nice complement.

The dried fruit is a bit elusive. Not raisins. More like figs. Depending on the palate, it could be anything.

The Alec Bradley Black Market Vandal has not achieved flavor bomb status. But it is a steady stream of nice flavors. Again, proper aging will cure this. I have another stick I will smoke in a month or so and come back and update the review.

Clearly, I taste the potential of a great cigar. Not the final blender’s intent. Chocolate may indeed show up with more time on it.

But I’ve been smoking long enough that potential tells me everything I need to know about a blend. If a cigar is this interesting so early on; it will be a killer a month or two from now. I’m sure the big reviewers are just waiting for the cigar to humidor age. I don’t blame them.

Or it could be that because this just may be a CI house cigar, they won’t touch it. The other thing to consider is that Alec Bradley gave the CI Conglomerate first dibs on selling the cigar before it releases it to everyone. I find it odd that a company as big as A/B says nothing about this blend on their web site. I’ve found that most big companies won’t show partisanship by advertising a house blend. Look at AJ Fernandez. This guy has blended a gazillion different cigars but all he shows on his web site are the San Lotano, New World, Pinolero, and Mayimbe. Five cigars.

I am at the halfway point. And I’ve invested an hour of smoke time.

I think the Alec Bradley Black Market Vandal will supplant the Coyol as my fave A/B cigar blend. 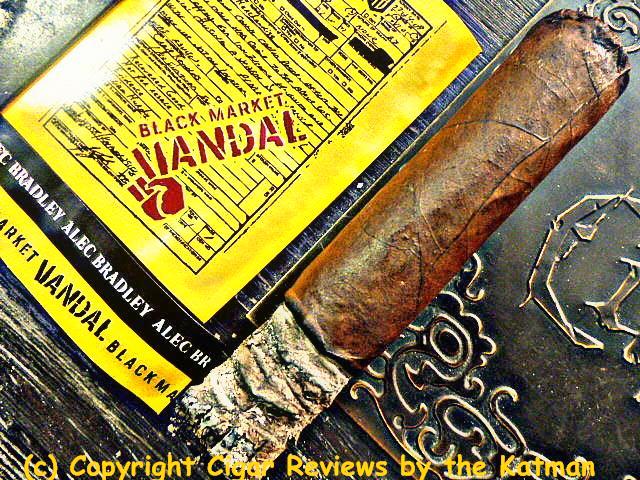 I am just marveling at the construction. It is like a Hummer. The char line is near razor sharp. Very little trouble with the cap. And not a single wrapper issue. And it’s cold here in Wisconsin.

The flavor profile remains static. Same list as earlier and in the same order.

The strength has been a solid medium body throughout the smoke.

As I tire easily of having the ash fall into my lap and finding the opening to my boxers, I knock off the ash in 1” increments. If I had any balls, pardon the pun, I bet this cigar could attain a very long ash that would astonish and amaze. But I’m tired of a charred penis.

There is a coupon code website called “retailmenot. I’ve found lots of great coupons for the major online cigar stores. You may want to check it out next time you buy from one of the behemoth stores.

And while my mind is mulling life over, an explosion of flavors are emitted like a lava flow.

The sweetness factors are right upfront: Caramel, brown sugar, orange blossom, sweet coffee, and dried figs. The creaminess enhances all of the flavors.

It is about to attain flavor bomb status at any moment. Typical of good cigars not given their due in your humidor. The sweet spot doesn’t start in the first quarter inch. It starts at just past the halfway point.

This is a much better blend than the original Black Market. Which is a good cigar.

The “Extreme Quality” concept I spoke of earlier is still with us. 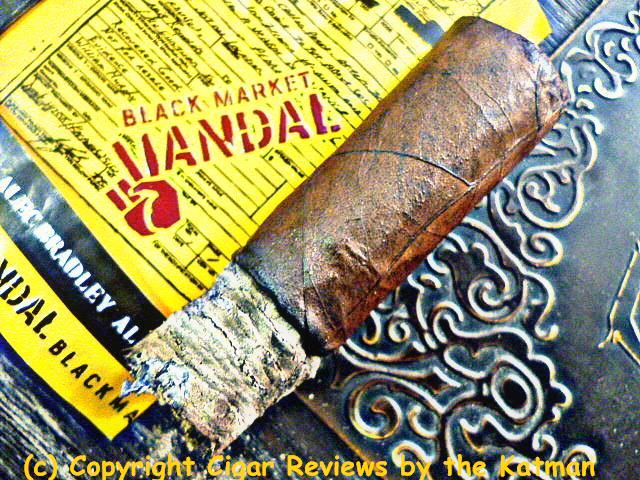 I allow the cigar to burn instead of writing. Remember, I did you a solid by not writing an 8700 word essay.

Total smoke time was just shy of 2 hours. Certainly a stick in which you get your money’s worth.

The Alec Bradley Black Market Vandal has a lot going for it. Interesting flavors. Solid construction. Great price point. And that elusive quality that only superb cigars find holding court.

Tomorrow, I have a great rock n roll story. I’ve been remiss in telling tales of rock music, drugs, and debauchery.

NOTE: 5 days later I am smoking the second stick. Flavors have become much bolder. But the strength is so powerful by the middle of the cigar that I don’t think I can finish it. And this is on a full stomach after dinner. I am staring at this cigar halfway done and I’m wondering how I am going to finish it.