As in the White Meat blend, the tobacco is all Aganorsa.

The line began in 2011. And was originally part of the White Label Project. (See Smoke Inn).

Both blends were released last month.

In addition to the Thanksgiving releases, Andre Farkas released a third blend called Farmer Bill Hatchet. A 7 x 52 box pressed stick that goes for $11.00. And it was also released in November. 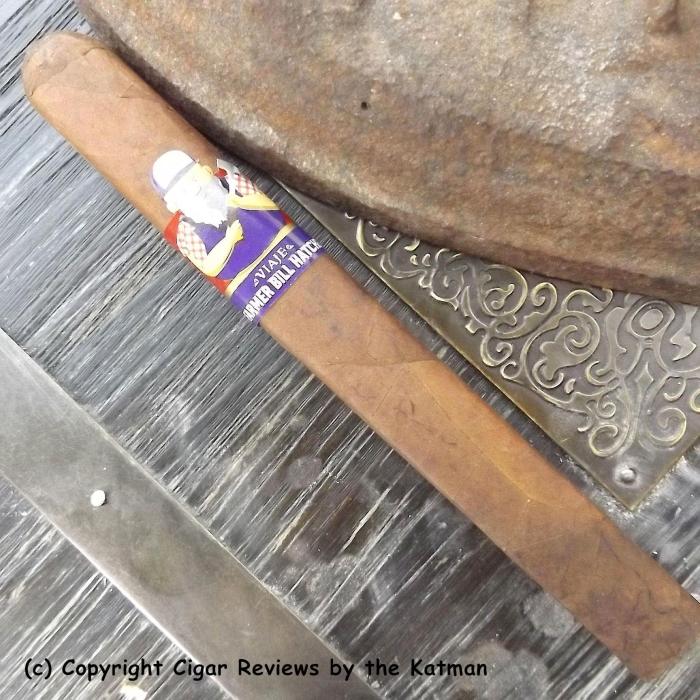 Between 2011-2103, the White Label Project output was only 150 bundles per year. I could not find any info on how many of these three cigars will be released. But I imagine that they will be short on supply.

The cigar bands are identical on both the White and Dark Meat blends.

What provides the obvious difference is wrapper color. The Viaje Stuffed Turkey Dark Meat 2014 has a charcoal black San Andrés maduro wrapper. While the White Meat had a Nicaraguan Criollo wrapper. Much lighter in color.

As in the White Meat blend, the cigar is near flawless in its construction. Seams are tight. Veins are at a minimum and the San Andrés maduro wrapper covers up what little there are. The stick is hard as a rock. For the most part, there are some appropriate points with the right amount of give. The wrapper has a semi-oily/ matte finish. The triple cap is near invisible to the eye.

I clip the cap and find aromas of spice, dark cocoa, espresso, nuts, cream, cedar, and leather.
Time to light up.

Just like the White Meat blend, the cigar starts off with a bang. The draw is perfect. And the flavors galore; as in Pussy: Oozing dark chocolate, rich earthiness, creaminess, a red hot peppery element, espresso, cinnamon, wood, and leather. 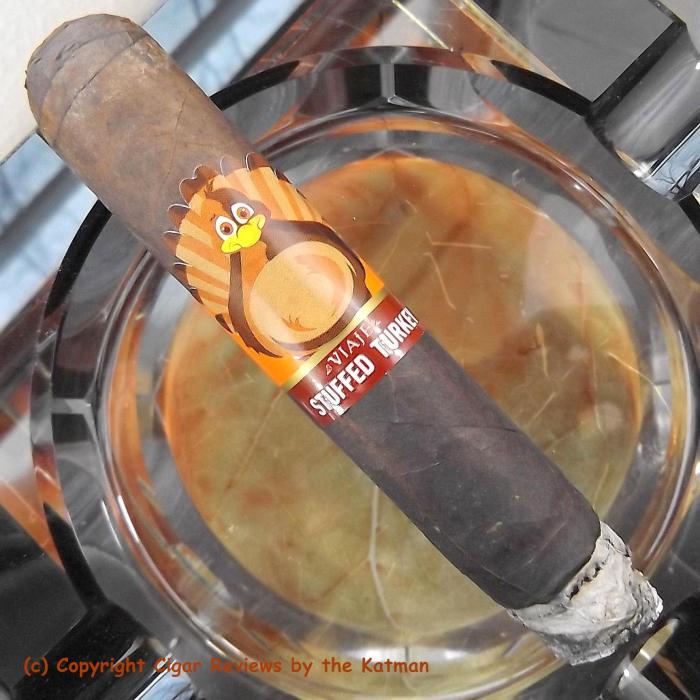 It is damn near a flavor bomb before hitting the first 1/8” burned. Just as the White Meat accomplished. With the differentiation of the San Andrés maduro wrapper, I expect a different cigar in some aspects. The San Andrés should add some sweetness, strength factor, and steer away from a candy bar effect.

Right away the strength is a strong medium/full body. The cinnamon is very strong. I like that.

I am waiting impatiently for my Maxi Jet DuPont lighter to return from the manufacturer as it is being repaired. It gave me a good 18 months of no trouble. And then it did.

In the meantime, I am using one of those overpriced Bugatti Zippo-like lighters with the insert. This is my second favorite lighter. The inserts never last more than 4-5 months, but they are cheap and I still have the pretty Zippo type casing in bronze and black. These are great lighters.

Unfortunately, Bugatti doesn’t sell replacement inserts. My first one lasted a full year. Since then, I’ve bought the inexpensive Z Plus replacements.
I also have a custom made Zippo lighter made by Squid Lighter. It is totally covered from head to toe with Camacho cigar bands and then some sort of shiny lacquer is applied. This is my pride and joy. It only comes out on special occasions.

The cigar hit Flavor Bomb 1.0 at the start.

There is a liquor flavor I can’t identify. I smell it. I taste it. But I’m not a drinker so narrowing it down is near impossible. My wife’s drink back when I was courting was Gran Marnier. Served warm with a twist. The flavor seems to be heading in that direction with it being led by the orange citrus.

Just the opposite is happening. The White Meat blend was super sweet. Almost too much so. The San Andrés is providing a better balance by keeping the sweetness in tow. I like it.

A new flavor arrives in the form of nuttiness. The nut is generic at this point.

A nice toastiness is on the scene like a sex machine.

The spiciness ramps up and is pure red pepper. This is a nice surprise. I got most of it on the retrohale but plenty left over for just puffing away.
The Viaje Stuffed Turkey Dark Meat 2014 is a mighty fine cigar. I think, at this early point, I like this blend a tick better than the White Meat. I’m a sucker for maduro.

The chocolate and creaminess are so bold that I grab a Diet Coke for the NYC egg cream experience. The wrapper is providing and extra big sampling of chocolate.

One of these days, I am going to buy; online of course, a bottle of Fox’s U-Bet chocolate flavor syrup.. That and some seltzer and milk is all you need.

In case you live in Nebraska, this is how you make an egg cream:
“Pour 3 tablespoons of chocolate syrup and 1/4 cup of milk or half-and-half into a 16-ounce glass. While beating vigorously with a fork, slowly add club soda until the glass is almost full. Add a straw and serve very cold.”

The Viaje Stuffed Turkey Dark Meat 2014 is less a dessert cigar like the White Meat blend and more straight forward. I prefer the Dark Meat.
But that’s the beauty of the Small Batch Cigar Viaje Thanksgiving Mix – Pack of 5. You get two of each and your preferences will out.
Flavor Bomb 2.0.

Complexity digs deep now. The balance is on point. And it has a nice long finish.

It is definitely orange citrus. So it must be that Tante Claus brought me a bottle of Gran Marnier for Chanukkah.

My mother had two sisters. Both gone now. One was Rhoda. The black sheep of the family. She was a tall, good looking brunette that lived on the wild side. She was probably 12 years older than me. And she took me everywhere with her.

She hob knobbed with the elite of Jewish mobsters. That’s all she dated. And that’s all she married; 4 times. All of them turned out abusive and on me too.

I met guys named Swifty and The Nose. This era lasted between the ages of 15-21. I was just old enough that her gorgeous women friends gave me a constant boner. I was always carrying my Ozzie & Harriet knit sweater with me to cover my hard on.

I’ve got photos of my aunt and I at the hot spots in Hollywood. And we would be sitting in large booths with nothing but gangsters and good looking women…and me.

I was a good natured kid. Not like now. And the gangsters had me calling them Uncle.

Aunt Rhoda spent most of her later years working in Vegas at Caesar’s Palace for the owner. God, the stuff she must have known and seen.
When I got back from my European adventure in 1976, we had lunch at Cantor’s in West L.A. She offered to become my manager. I laughed out loud and hurt her feelings.
She was what Sinatra would call a “great broad.”

Back to the Viaje Stuffed Turkey Dark Meat 2014.

The strength is a very smooth medium/full. And no nicotine.

From the donations I received from readers, I split my purchases with Cigar Federation and Small Batch Cigar. So far, a winner all.

One of the things I like best about Viaje blends is their readiness to smoke in just a couple of weeks. I carefully picked cigars that had the same propensity. I didn’t want to wait 3 months for the more commonplace cigars to humidor age. So, that’s the reason, my reviews of late have been boutique brands/blends.

I am really getting the hang of my new camera. I still have a long way to go to understanding all it offers. But one thing that drives me batty is that I use the Macro mode for my close ups. It is so sensitive that the height of the cigar as opposed to the height of the cigar band causes a little bit of a focus issue. And I can’t seem to beat that problem. The difference in height of only half an inch puts one of the two items just a tad out of whack.

My excellent buddy/friend/brother, Rick Tunstall…bought me a tripod. This wonderful guy really went all out for me. Rick is a warrior. Three tours in Viet Nam. A bevy of medals and one that is the highest medal bestowed upon a soldier. He was wounded several times. He is very much like our warriors of today who fought the good fight in Iraq and Afghanistan. But he came home totally intact. And he is my hero in terms of being a brother musician.

Construction of the Viaje Stuffed Turkey Dark Meat 2014 is near flawless. It has had a wavy char line but hasn’t required a single touch up. No wrapper issues. And only one small clip of the cap was needed. I am trying a different method of puffing to avoid the ugliness of the Katman drool.

Lastly, of the Thanksgiving blends from Viaje, I still have the Farmer Bill Hatchet to review. Maybe tomorrow. Word on the street is that the FBH is a better cigar than the Stuffed Turkeys. We shall see. 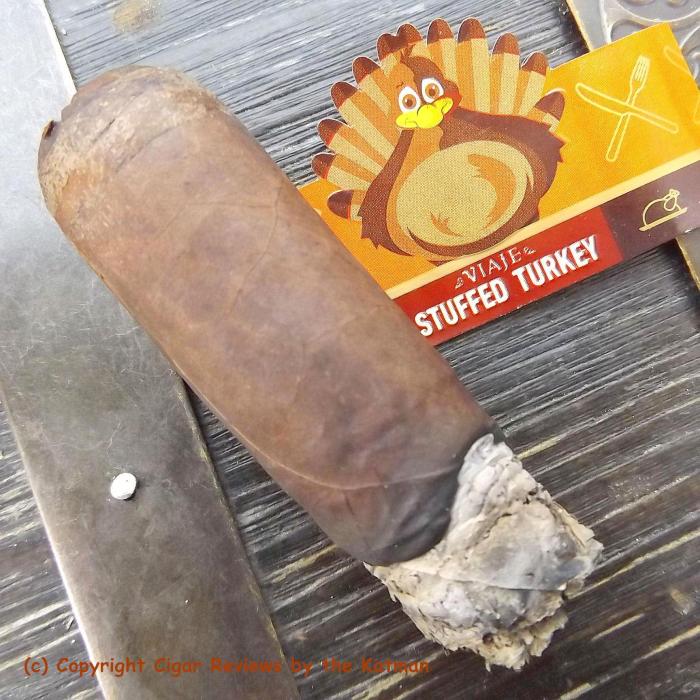 I’ve invested 75 minutes in the smoke.

Thank goodness that not a shred of nicotine has reared its ugly head. 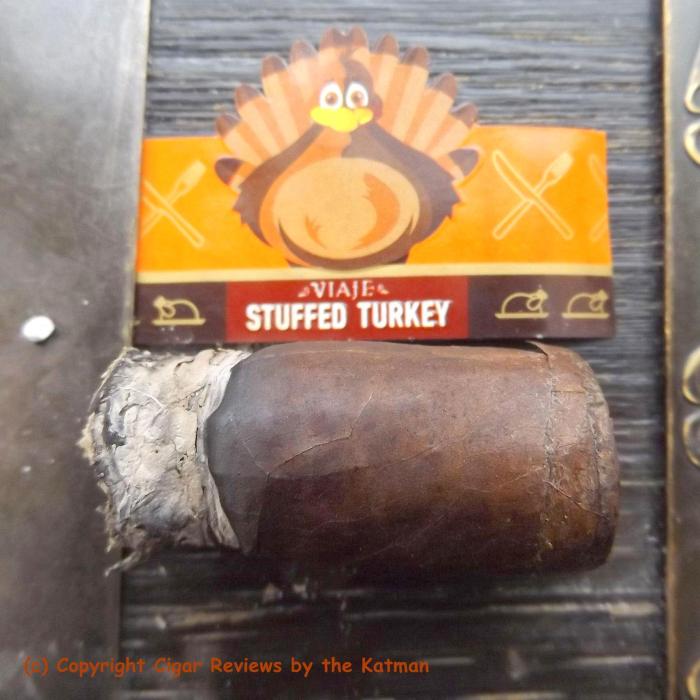 I highly recommend this cigar. But the Viaje Thanksgiving Mix 5 Pack from Small Batch Cigar for $51.00 is a great way to go since the two Stuffed Turkeys are totally different blends.

Please tell Small Batch Cigar that the Katman sent you. Thanks.

The Viaje Stuffed Turkey Dark Meat 2014 was a wonderful smoke. So full of flavor and complexity. It finishes out cool and without a hint of harshness.