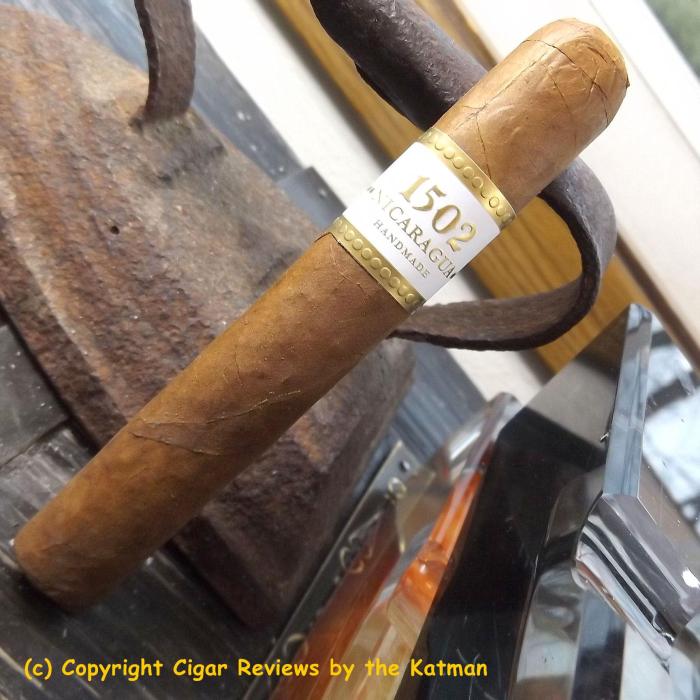 Today we take a look at the 1502 Nicaragua. It follows the 1502 Emerald, Ruby, and Black Gold. All reviewed here. It is the fourth release from Global Premium Cigars. And distributed by the House of Emilio.

It is a regular production cigar first release in June, 2014. And produced at the Plasencia Cigars S.A. factory.
The blend makes use of all the best areas in Nicaragua: Esteli, Jalapa, Condega and Ometepe.

And if you ever wondered why it is called 1502? (I didn’t really care.) But 1502 is the year Columbus discovered Nicaragua. Woo Hoo!

“Nicaragua is one of only two countries in the world which can produce cigars entirely from their tobacco. The 1502 Nicaragua epitomizes this birthright, as it is made from tobacco from all four regions of Nicaragua: Esteli, Condega, Jalapa, Ometepe.

“This cigar was created for my newborn son. So that he never forgets his roots – 100% Nicaraguan,” said Enrique Sanchez, President of Global Premium Cigars.”

The 1502 Nicaragua is a nice looking stick. A dirty blonde, or caramel colored, mottled wrapper. A little added attraction of a semi-closed foot. Seams are tight. The cigar is not rock solid; and in fact has a lot of softness to it. I suspect it will be a quick smoking cigar. The wrapper is semi-oily and semi-toothy. The cap is expertly applied so it is hard tell the number but I’m guessing a double cap.

I clip the cap and find aromas of spice, cocoa, coffee, nuts, vanilla, fresh cherries, and cedar.
Time to light up.

The draw is good. And a wallop of spice upside the head. Holy shit! I made the mistake of retrohaling the first puffs and the spiciness has my sinuses on fire. I am blinded by my own tears. I don’t know why I did that.

The pepper settles down immediately; and after my wife asks my why I’m crying I can taste very bold flavors of chocolate, cream, caramel, nuts, black cherries, orange citrus, raisins, natural tobacco sweetness, cedar, and a slight hint of maple syrup.
WOW!

I smoked, and reviewed, the other three blends and they didn’t hit me in the puss with a pie like this blend does. “Curly, Larry…Spread out!!”
I have no idea how the cigar is going to maintain this for 5”.

So we have a massive flavor bomb at ¼” burned.

I bought all my singles, and a few 5 packs from donations back in the last part of November. Received them early December. This means the 1502 Nicaragua has barely had two weeks humidor time. Impressive.

For the most part, I really lucked out with my choices of onesies and twosies. You try this. See if you can find a bloody cigar for less than $9?
Despite my skepticism, the 1502 Nicaragua is a slow burner. I was completely fooled by how light in the hand it is.

I know you must be getting tired of me fawning over cigar after cigar. What can I say? I was very, very lucky in picking the blends. This is not how my life seems to run.

I can taste some cinnamon now. The nuttiness becomes stronger. And a flavor that is either graham cracker or nougat appears. I realize you’re going “What?” But there are so many impressive influences in the flavor profile that it is very difficult to discern some specifics. It is causing sensory overload.

While there are a lot of sweet factors, it is not an overly sweet blend. There is enough savory influence to counter balance the flavors.
I think it is nougat.

The ash is hanging precariously over my crotch. I close my robe. I like to write my reviews in the nude; sometimes with boxers on. Try and get that picture out of your head. 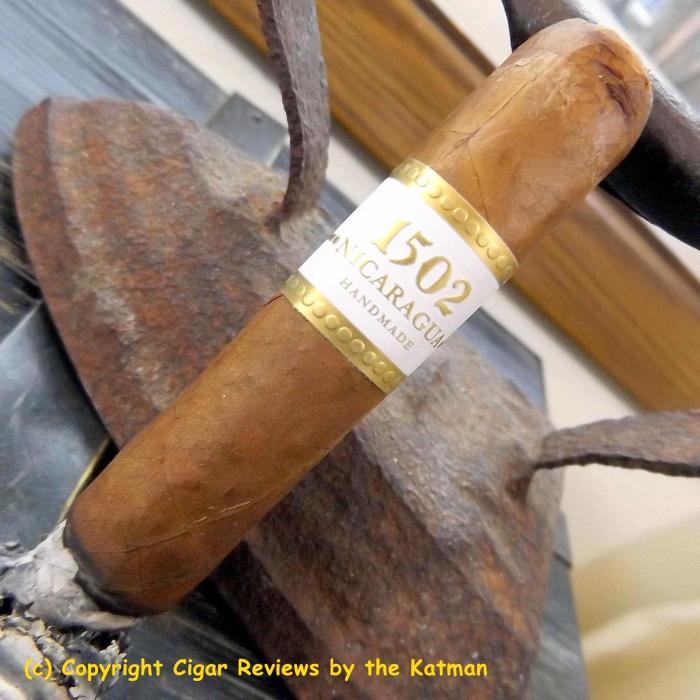 Orange citrus comes forward. The coffee element dissipates. The chocolate is not as strong as the start of the 1502 Nicaragua.

The flavor profile settles down with the creaminess, caramel, nuttiness, and citrus leading the pack. I knew it was too good to be true. All those great flavors at the start. Hoping it would continue to work off those flavors throughout the cigar was a pipe dream.

Don’t get me wrong, the 1502 Nicaragua is an excellent cigar.

The ha-cha-cha spiciness is all but gone now.

It is no longer a true flavor bomb based on my criteria…just a nice cigar with your typical Nicaraguan puro flavor profile.

The price point. Right on the money. This is the perfect $6 cigar. Loads of flavor and character. It doesn’t have that “It” factor that separates a brilliant blend from a very good $6 cigar.

With the new camera, I’m really trying to control the chomping but I forget. And as a result, you see my little beaver teeth marks in the cap. This is a hard habit to break.

I’ve invested about 40 minutes in the smoke.

The 1502 Nicaragua is a solid cigar. But none of the big online stores carry the brand. So you are stuck with this price point. No auctions to get it cheaper.

Cigar Federation has the whole line plus a 3 stick sampler. Of the four blends, the 1502 Nicaragua is the least expensive. The other three run in the $7-$9 range. But if you are a member (Membership is free), you get 10% off. They are running a special for the month of December where you get 15% off. That’s killer.

And if you want the best deal in the world for my favorite cigar The Collective by Ezra Zion, they are giving out a 35% discount. Man, jump on that. Instead of paying $11 a stick, it is only $7.15 per stick.

Back to the 1502 Nicaragua. It somehow went from fantastic to just OK. This is not a complex cigar. It has a nice balance with a long finish. But the pizazz ran out at the start of the second third.

Maybe the last third will surprise me.

The strength started out at medium bodied but now it’s reaching for medium/full. There is a bit of a harsh note. But then I should automatically discharge that interpretation as I have the flu for the third fucking time in 6 weeks. Fortunately, it hasn’t been a head cold or in the chest. Just that terrible malaise and horrific fatigue. With a headache. So it could be worse. I got my flu shot. What a waste of time. The docs guess for the coming year what flu it might be and they put together 3 or 4 different vaccines in one injection. And they guessed WRONG!

My daughter, Katie, is sick as a dog. But she is 29 first of January and burns the candle at both ends so naturally her flu is worse.
Back once again to the 1502 Nicaragua.

The 1502 Nicaragua borders on magnificence but quite can’t get there. It is like the little engine that could. But this can’t. And the cigar goes out on me. Drat.

I retrohale and get that same wallop of red pepper. And we have Flavor Bomb 2.0.
This is the sweet spot.

Whenever I write a review with only a few weeks humidor time I worry I’m not getting everything the blender intended for me to experience. So I quickly read a couple reviews of the reviewers I really respect. Our reviews are similar. Since no one but me tells you how long the cigar has rested, I can’t tell for sure how similar or accurate I am.

Another thing I’ve discovered to my dismay, the macro function of my new camera is so sensitive that if I create two different plains of height; either between the top of the cigar to the bottom. Or in relationship of the cigar to the cigar band, one part is just a tad out of focus. Still have that learning curve to achieve.

The 1502 Nicaragua is now fantastic. The strength is just shy of medium/full. But no nicotine. The spiciness is back which makes me happy. And the flavors are going wild. But still no complexity.

The 1502 Nicaragua is a very nice cigar at an affordable price. Lots of flavor, character, and a nice long finish.

Remember, it you want to snag some, Cigar Federation is your best bet.

Please tell the good folks at Cigar Federation that the Katman sent you. 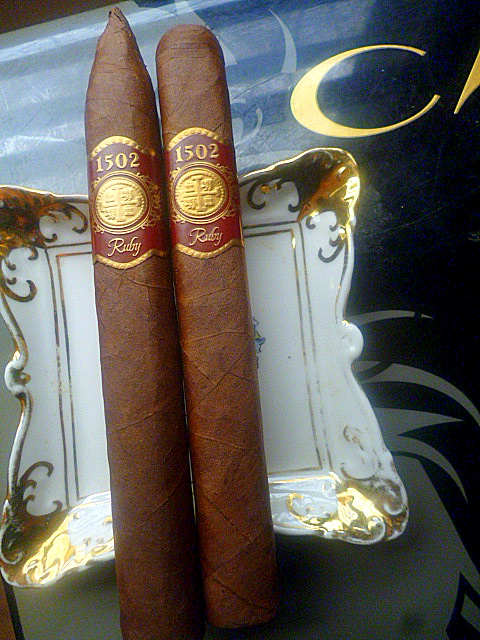