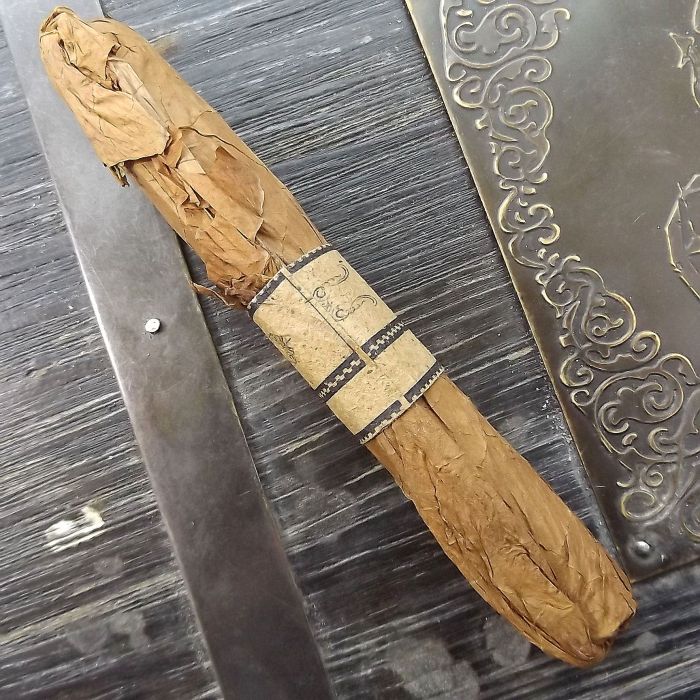 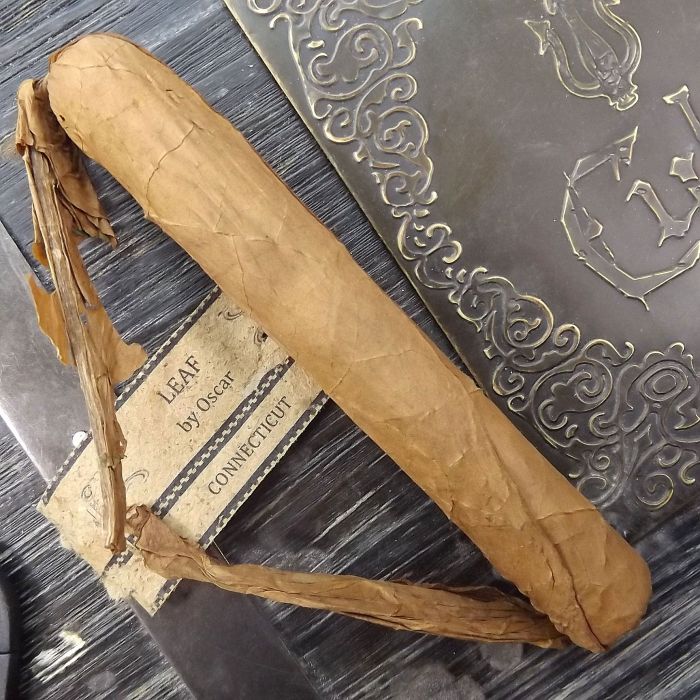 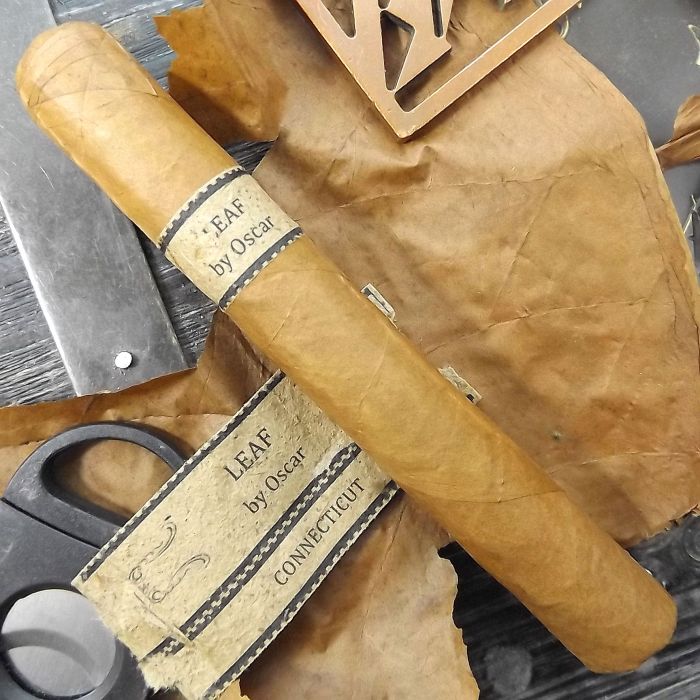 Today we take a look at the Leaf by Oscar (Connecticut).

This cigar has been reviewed by everyone and his brother. So I doubt you’re going to learn anything new.
I’m intrigued by the gimmicky wrapping. It certainly is unique. Now does the blend measure up?

I bought a sampler of all four blends from Rodrigo Cigars. 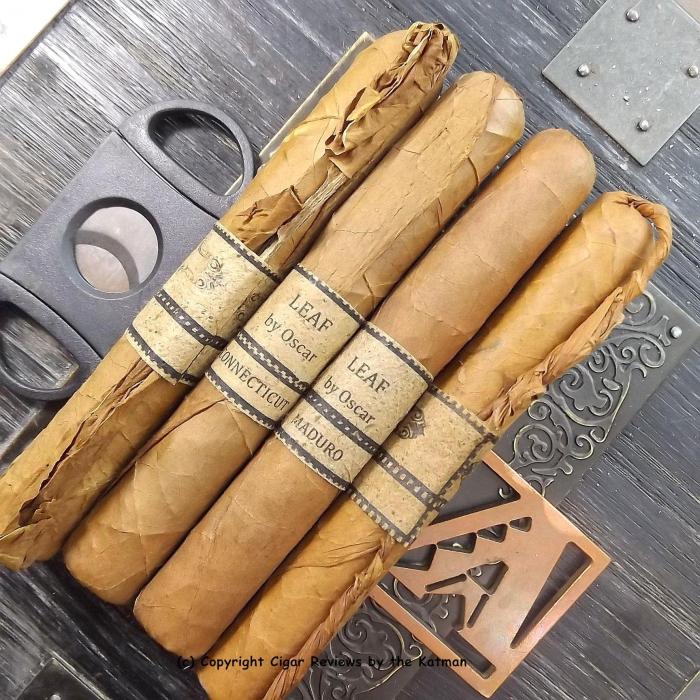 Before we begin…is there any boutique cigar out there that costs less than $10? No wonder Torano is so popular. They are the kings of the $5 cigar.
I read online, maybe FB, that the Connecticut was a great cigar so I picked this blend first. Also in the line, are the maduro, Sumatra, and the Corojo. All the same price. And all the same size.

Stripping the outer husk wasn’t too bad. Just be careful and take your time.

The cigar band, like the Leaf & Bean by Esteban is made from the same plant as tequila is made from.

There is a rustic quality to the construction after the husk is removed. A little lumpy and bumpy here and there. Visible, but tight, seams. Lots of small veins and a couple big honkers. A beautifully applied triple cap. The wrapper is very toothy. And has a bit of oil on the honey colored wrapper.
The cigar has a couple of hard spots but for the most part is consistently resistant. There are two hard spots and one is near the cap and the other near the foot.

I clip the cap and find aromas of hay and grass, spice, creaminess, a tart lemony citrus element, cocoa, and cedar. There is a rich earthiness as well.
Time to light up.

Immediately, the foot begins to canoe so I nip it in the bud. The draw is perfect. Airy but not overwhelmingly so. Smoke is now nearly blinding me as I chomp and write.

First flavors are: creaminess, spice, lemon, cedar, and some leather.

There is another tart flavor at work. Something fruity, like JT. It is pomegranate. It is subtle and only comes through during the finish. Added to the lemon, the two elements are extremely refreshing. Like a southern libation, y’all.

The Leaf by Oscar (Connecticut) has a slightly banana peel taste. Maybe my palate is still in the ER.

A nice sweetness invades from the north.

This is a slow smoker. I will be here for a while.

The only Connecticut I truly dig is the My Father Connecticut. It came out this year and blew the doors off the hinges in terms of what one expects from that light colored wrapper. It was bold and exciting.

So, Connecticut is a wrapper I tend to avoid as 90% of the time it comes with the description of “Mild.”

At the moment, the Leaf by Oscar (Connecticut) is mild/medium trying to push its way to classic medium body.

More waviness at the char line. I admire a few reviewers who smoke 2-3 sticks before reviewing the cigar which gives them a good look at its consistency. Unfortunately, I bought a single stick sampler and I have one chance and that’s it. But at these prices, that was the best bang for the buck for me in terms of getting the most out of my money for reviews.

The creaminess surges at the 1-1/4” burned point. It drags along with it the lemony and pomegranate. Wood is a strong element.

At this point, I would dare say this is a pleasant cigar. It is not bowling me over. I must be fair here. The presentation provided a false sense of security for me. I’ve only had the cigars a week. I possessed the bombast to think that these sticks would be good to go on receipt. I’m about 75/25 right about these things.

And with 2” burned, the Leaf by Oscar (Connecticut) flourishes. The cocoa never materialized but the creaminess and fruitiness and wood flavors, while simple, are providing a totally enjoyable experience.

The Leaf by Oscar (Connecticut) has a different quality to it than other Connecticut wrapped cigars. The heavy dose of sweet and tart and creamy are unique to this wrapper. If my memory serves me well, Connecticut cigars have been only mild earthy flavored. Rarely complex. And rarely full of bold character.

I am sipping Diet Coke because the cola is good for the tummy when it isn’t feeling so good. This is the first morning in over a week that I didn’t wake up feeling like I had a hangover.

The strong lemon makes it seem like I’m drinking a lemon Coke.

The strength moves to medium body.

And the Leaf by Oscar (Connecticut) sinks its teeth into some complexity. A nice balance. And very long finish. 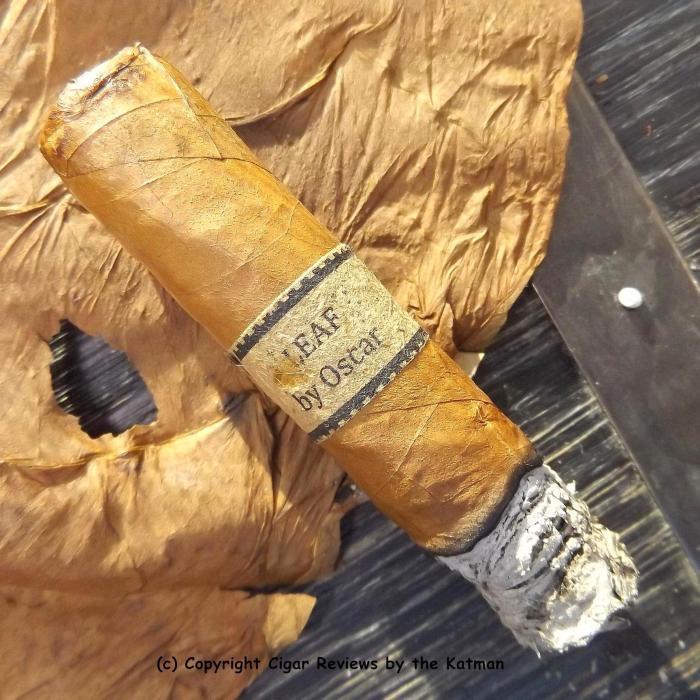 My only criticism, not counting the wavering char line; is that the blend is pretty much a one trick pony. We’ve got a minimum of flavors and since this is a big cigar, nearly 2 hours of the same flavors will become boring. I could be hasty in my assessment. Let’s see.

The spiciness is all but gone now. That would have been a hat trick if the blend had been able to keep that up throughout the smoke.
Additional humidor time is called for. I have three other blends to review and I will let them sit for a month and try again.

I stop writing and check out the other 1435 reviews of this cigar and, basically, they are reporting the same as I. While none say how long they allowed the cigar to rest, the consistency of their impressions clarifies mine that I’m on the right trail. No one is finding any other flavors than the ones I report to you here.

The foot needs occasional touch ups. For me, $10 for a cigar should provide a razor sharp char line and zero construction issues. On the ten scale, I give the burn issues a 5. On the construction of the cigar, I give the Leaf by Oscar (Connecticut) a 9.

We’ve got a bright, sunny day in Wisconsin this morning forcing me to don a baseball cap so I’m not blinded by the sun through the dining room window.

I’m becoming very happy with my new Fuji camera. While being sick waylaid my ability to really explore what it can do, using standard settings is still giving me a nice photo. The most important thing I’ve learned is spatial distances. Because the Macro setting is so sensitive, and change in the height of the cigar to its background causes the foreground to be a bit out of focus. So, at the moment, I am forced to keep the cigar and its background on the same plane. (Leaving at Gate D5).

The price point. Yikes. $10.00! Since I’ve checked other reviews, I am confident that what I am experiencing is what the Leaf by Oscar (Connecticut) has to offer. 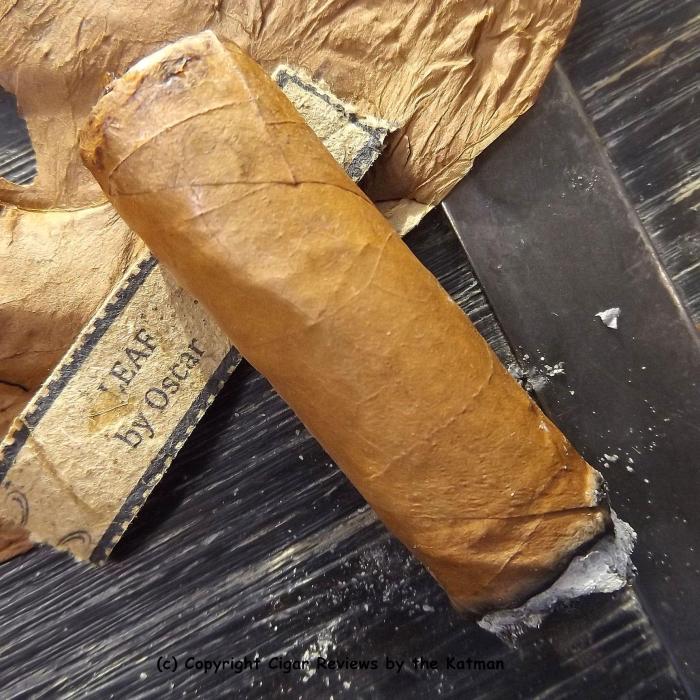 I’m hoping that the Maduro, Corojo, and Sumatra kick it up a notch. I will come back to those in around 3 weeks.

As a party favor with a bunch of cigar smokers, there is none better. I have been given the responsibility to provide around 20 cigars to the groomsmen at my daughter’s wedding in May. Depending on the other blends, this might be the perfect stick to give out.

My daughter’s fiancé’s family are from here and there are a gazillion of them. There will be approximately 250-300 of their side and, if we are lucky, we will have 25 on our side.

The last third begins. And I do believe we have found the sweet spot. Flavor Bomb 2.0.

Flavors go from nuanced to bold in the blink of an eye. Same ol flavors but flamboyant now.

The pomegranate is gone leaving just the lemon citrus, creaminess, wood, and earthiness.

The reviewers that score their reviewed cigars are basically giving the Leaf by Oscar (Connecticut) an 88-90 rating.
I don’t know if I would rate this cigar that high. My feelings are that this is a good $5.00 cigar.

The halfway point is upon me.
Smoke time has been approximately an hour.

Once again, the flavors of the Leaf by Oscar (Connecticut) have not changed since their last sonic boom. They are lively and flavorful but surviving on a mere four flavors. Usually, in a case like this, the earthiness takes over and completes the cigar’s flavor profile. But the earthiness in the Leaf by Oscar (Connecticut) is nice but not earth shattering.

Clearly, the blender Oscar Valladares, knows what he is doing. I’m not sure what he was shooting for but in spite of the flavor profile being one dimensional, it is a well-executed cigar blend. 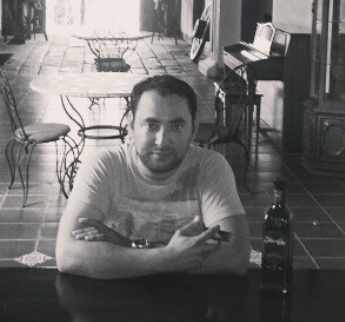 Sometimes, I think I should be like most of the other reviewers and sum up the flavor profile in 2-3 small paragraphs. But I like to write. And I have no stop gap.

I’m betting that the more sophisticated wrapped blends are much better than the Connecticut.

Removing the cigar band in one piece is impossible. The paper is as delicate as rice paper so I use my X-Acto blade to cut it free..nicking some of the wrapper in the process.

I make my first clip of the cap to destroy evidence of my chomping drool. The cigar holds up well. Which brings about another question.
Yesterday, I reviewed the 262 Paradigm. And the sucker totally unraveled on me. Too dry. I talked myself into believing it is the frigid Wisconsin weather.

So maybe it wasn’t the cold that destroyed the 262 stick. Maybe just bad luck.

Did Santa bring you everything you wanted? Or did he leave a bunch of 5 Vegas sticks in your stocking? 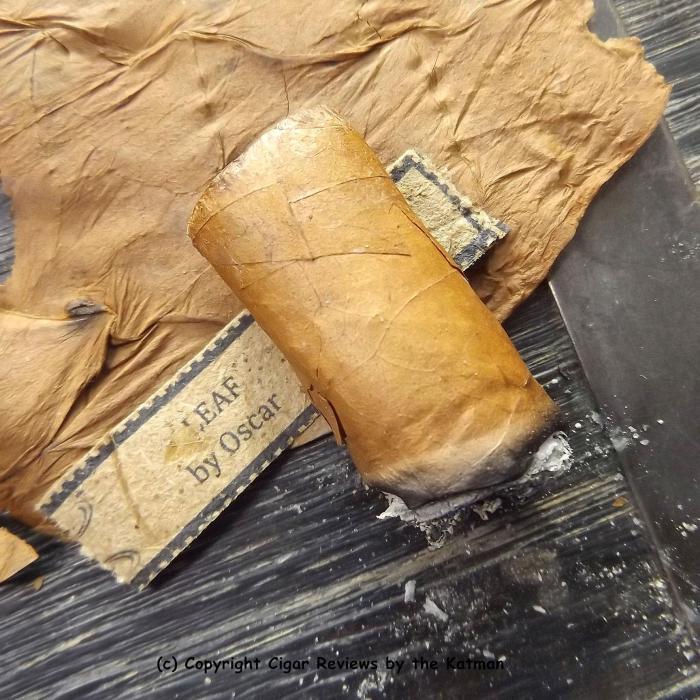 Don’t forget about the contest I’m having. Giving away a dozen Perfecto Cigar Holders/Ashtray. Not a lot of competition right now so get on it.
The Leaf by Oscar (Connecticut) has backed off from its Flavor Bomb 2.0. Flavors are muted now. Strength goes back to being mild body. 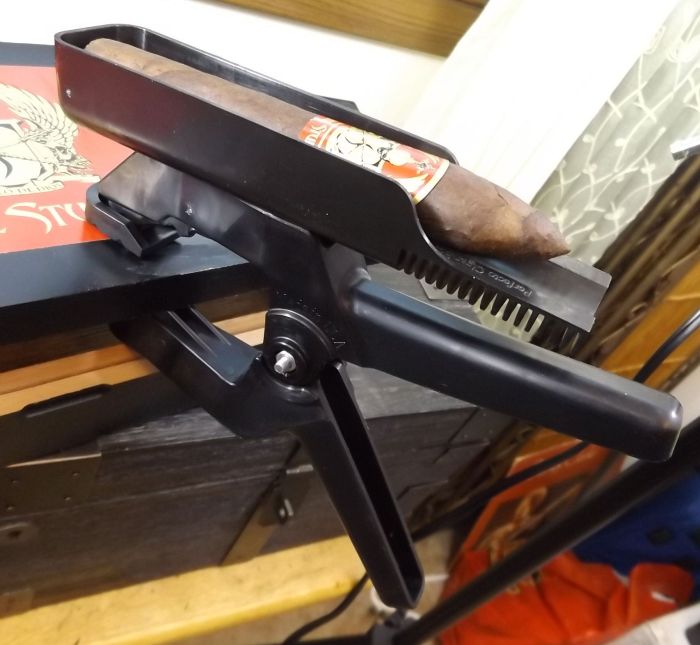 At this moment, I can’t recommend the Leaf by Oscar (Connecticut). Wholly based on its price point. This just ain’t a $10.00 stick. Therefore, I must reserve my recommendations on the other three blends until they’ve rested more and I’ve reviewed them.

If you want to read about Leaf by Oscar then this is the link. The owner, Jim Robinson, is also known as Island Jim. That should ring a bell if you’ve smoked Eddie Ortega’s Wild Bunch series.

The sampler at Rodrigo Cigars is a great way to try all four blends and then you can make your own decision. But a better place to get them is at Two Guys Smoke Shop where you can buy a single of all four blends for $7.35 each. And $8.00 each by the box. That doesn’t make sense. Buy 20 singles at $7.35 and the box price goes down to $147.00 instead of their box price of $160.00. Regardless, it is a more cost efficient method for sampling the blends. If I had done my research, I would have bought them from Two Guys rather than Rodrigo Cigars. $7.35 is much closer to the mark. 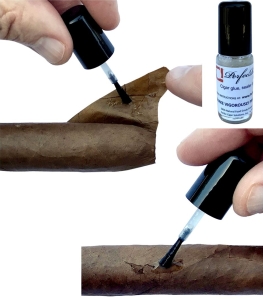