Today we take a look at the Man O’ War Immortal by AJ Fernandez. This is a brand new version of the Man O’ War line.
I got mine on a Daily Deal on CI for $4 a stick in a 10 pack. That sale expired on Jan. 5.

There is no information on this cigar at all. At the AJ web site, he only recognizes the cigars that have his name on them. So no luck there.

Nice looking stick with a butterscotch colored wrapper. Seams are tight. Lots of veins. Jam packed to the gills…but with the right amount of give. A perfect pig tail. An expertly applied triple cap. And very smooth to the touch. 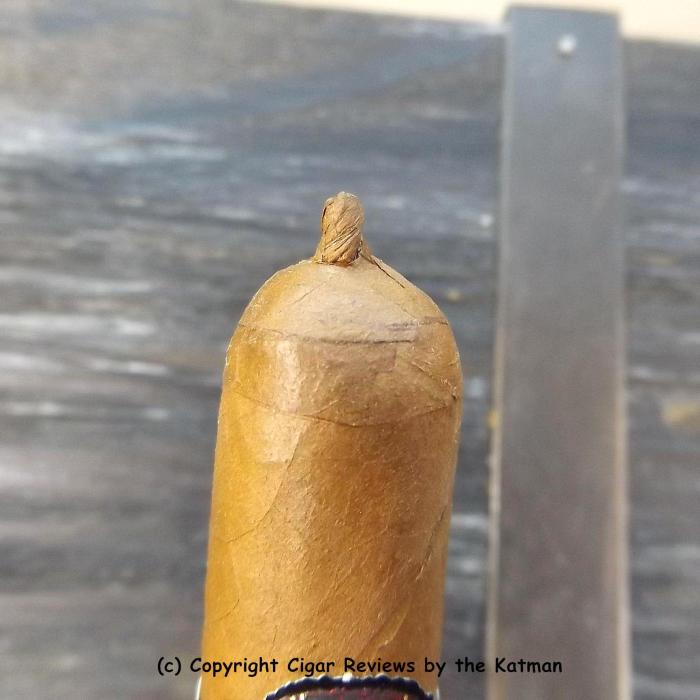 I clip the cap and find aromas of spice (Very spicy..Three machine gun sneezes from the clipped cap), cinnamon, chocolate, coffee, cedar, and leather. Pretty much the standard aromas from a Nic puro.

I smoked one a couple days ago and it seemed rarin’ to go.

The draw is good. Spice slams its fist down on the table and says, “Spread out!” At the same time, creaminess counters the spice’s offer. And then chocolate, coffee, and cinnamon. All within the first minute of smoking.

The Man O’ War Immortal starts off very tasty. Caramel shows itself and now I have a big ice cream sundae.
The red pepper is like….Yikes! Wow! Holy Shit! My eyebrows are peeling off.
I like it. 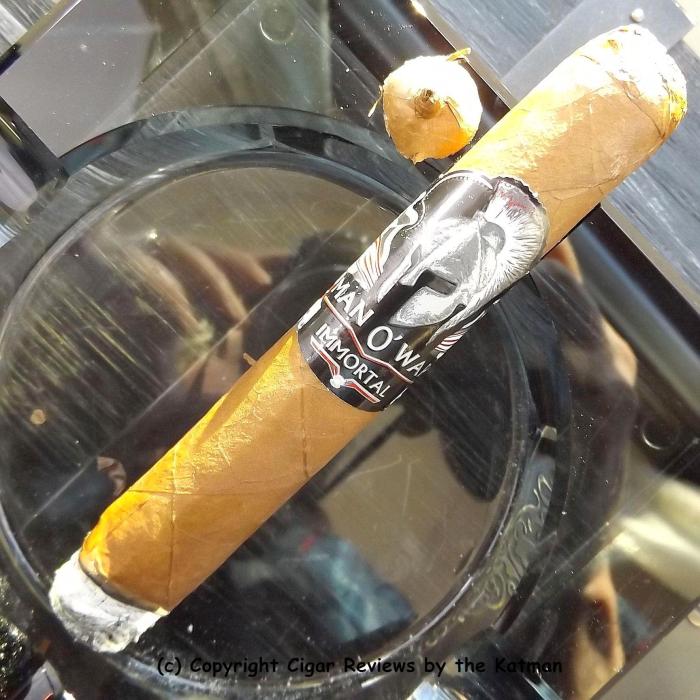 For some reason, the Daily Special was on CI but they don’t carry the cigar yet. Cigar.com carries it.

The char line is wavy and may need a touch up.
Naturally, the first Man O’ War Immortal I smoked had no such troubles.

The strength is a tad higher than medium body. 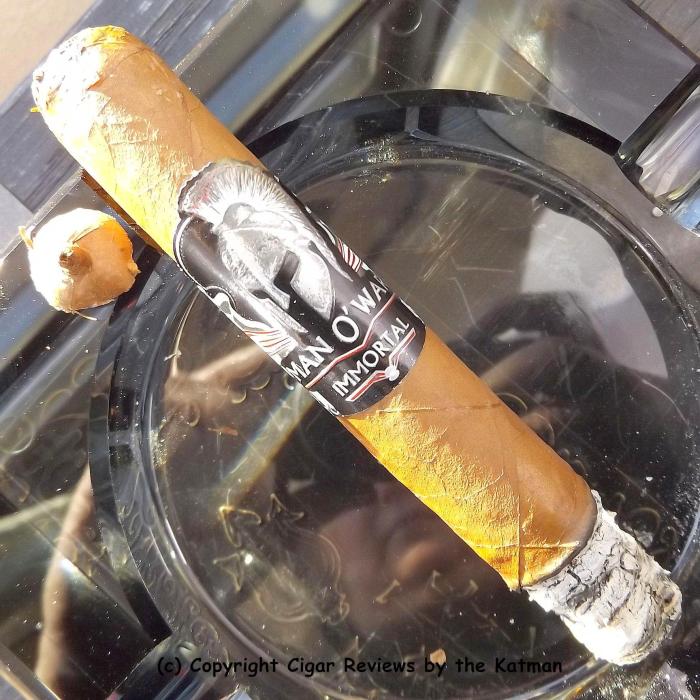 I am getting a taste of the future by smoking, and reviewing, the Man O’ War Immortal only a week after I got it. AJ cigars have a tendency to put forward that fresh rolled taste for a few days before it needs some hibernation. It will come out the other side an excellent cigar. And a lot stronger than it is now.

There is no complexity. Just a bevy of nice flavors. Again, due to smoking it so soon.

There are no reviews of this cigar online. I thought I would do a public service announcement review so skeptics and interested parties would get at least one person’s assessment.

The flavors perk up even more. All are very strong. But stand independent of each other.

Creaminess, spiciness, chocolate, caramel, malt, coffee, nougat, cinnamon, cedar, and leather are devoid of interaction with each other.
I know a lot of you aren’t AJ fans. I am.

This is AJ’s first economy blend. At $5 a pop by the box, it is much cheaper than the rest of the line. Not counting the gimmick blends. Although the Sons of Anarchy Clubhouse Edition is a superb cigar and it only runs $6.00 per cigar which includes a pretty cool box. This is a blend that ages beautifully. I reviewed them back at the start of November and now, roughly 2 months later; they are “screamers in bed.”

The char line works out the kinks and is now razor sharp.

I normally use my big stainless steel four size ring gauge cutter. Specifically, the V cut for all of my cigars. Today, I did the yarmulke cut so I could have the little beanie with the pig tail in the photos. Only problem with a totally open cap, is that Katman drool does a real number on it and quickly. So occasional clips will be necessary. If you would like a signed cap clipping with Katman drool on it, contact me via my email address.
The second third begins without changes.

The strength reaches a solid medium/full.

With a couple months humidor time, I am pretty sure that the transition of flavors will be excellent. A deeper, richer, more complex flavor profile. So I won’t touch them for 2 months and report back. Of course, by then you will have snagged some. At this price, why wouldn’t you?

Flavors keep getting bolder, exponentially, with every half inch smoked. It is a Smörgåsbord of interesting flavors. I am guessing the intent was to give the smoker all the good stuff from a Nic puro of the more expensive price line in an economy stick.

The Man O’ War Immortal makes a sudden swoop to super full body replete with nicotine; and with 3” still to go.

I like the Man O’ War line especially the Puro Authentico. But on a regular basis, out of my budget parameters. So nabbing these for only $4 each and the box price only $5 each, I might be able to swing a stab at buying more. This is the kind of smoke that is nice to have in one’s rotation.

Once the brouhaha wears off, Cbid will have them for around the price I paid for them on sale.

The ash on the Man O’ War Immortal isn’t pretty. Sort of ugly looking like a battering ram. But besides that, no burn issues.

I remove the baseball cap and don my NASA space helmet. I slide the sunshade down (Yes, that’s me in the photo shopped photo) and now I’m ready for when the nicotine kicks my arse and I wake up on the floor with the dog licking my neck and the cat chewing on my balls. Yes. We have a homosexual cat. Probably why no one wanted him at the Humane Society for 5 months. Poor fella.

I’m trying to remember the difference between the Man O’ War Immortal and the other blends. So I skim my reviews. It is not far off from the original Man O’ War. But this is not a complex cigar.

The other blends have more unique flavor profiles.

There is just a tad bit of sweetness in the Man O’ War Immortal. No fruitiness or other exotic elements. The earthiness of the tobacco is moderate in the scheme of things.

Flavors: Creaminess, chocolate, caramel, coffee, nougat, malt, toasty, cedar, and leather. The spiciness is gone and so is the cinnamon.

If you have no patience like me this is a fine cigar to smoke ROTT. If you have the patience of Job, then a couple months of humidor time will reward you. I guess. How the hell do I know? I’m sure the other reviewers are doing the right thing and giving the cigar some time to meld its flavor profile.

Or waiting to copy some other reviewer’s insights. LOL

I am going to have big trouble getting through the whole cigar. The nicotine and the full body are huge. My stomach is doing flip flops. And still 2-1/2” to go.
I might have to stop for a bowl of cereal. Which I do.

This horrible weather is all over the country. I look outside and it looks like a Hallmark card. We have plenty of food in the house and neither I nor Charlotte have to go to work.
I feel sorry for the poor shlubs that have to go out in this weather and put in their 10 hours.

Back to the Man O’ War Immortal. The strength and nicotine are easier to swallow now.

I highly recommend a full stomach before lighting one of these up. No breakfast cigar here.

The cereal really brings out the toastiness of the flavor profile. I am approaching the last third and things seem to explode in my face.
The red pepper returns in a force majeure. My sinuses open and the flood gates with it.
The Man O’ War Immortal finds its sweet spot.

This is absolutely a flavor bomb now. Gorgeous elements that find their complexity at last. That spinning wheel is a circle of fifths. The wheel hits all 12 positions.

Nuttiness arrives. The nougat, malt, toastiness, nuttiness, and wood soar like an eagle.

This is what the cigar will taste like in the first eighth of an inch two months from now.

And the somewhat missing sweetness is reeling it in and tugging hard.

I can’t wait to try the Man O’ War Immortal again in a couple of months. Outstanding blend.

Cereal, or no cereal, I’ve got the spins.

Holy shit. What a powerhouse. I have to put it down for a few minutes or else the cat will end up chewing on my balls.

Some bitterness appears. Must be tar.

The sunniness really shows off the oily caramel color of the wrapper. It is a very light colored Habano.

The price point. I consider it a deal. Since Cigar.com hasn’t had a daily deal on them, (I think), look for it. And once CI begins to sell them, getting the on auction at Cbid should not be far behind.

If I didn’t know better, I would guess that this is at least a $7 stick.

I manage to finish the Man O’ War Immortal without being chewed on by the cat. Total smoke time was 90 minutes. I couldn’t finish the last 1″. 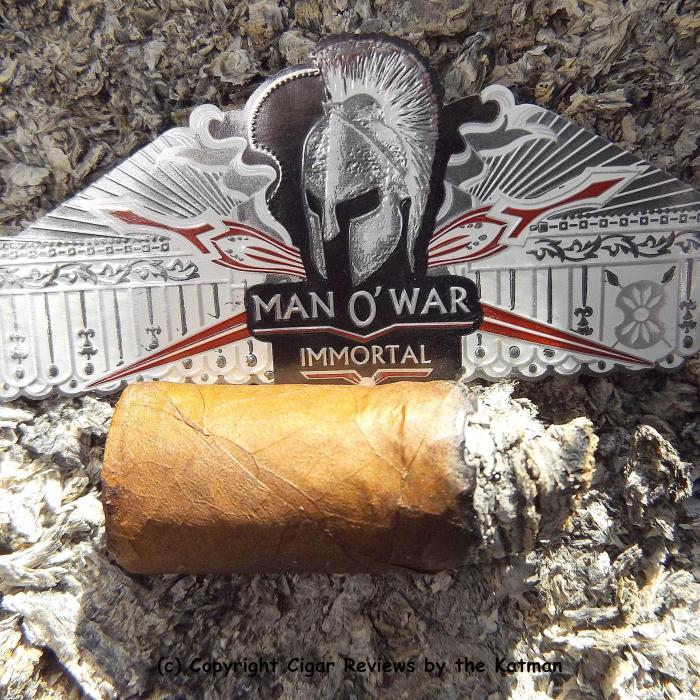