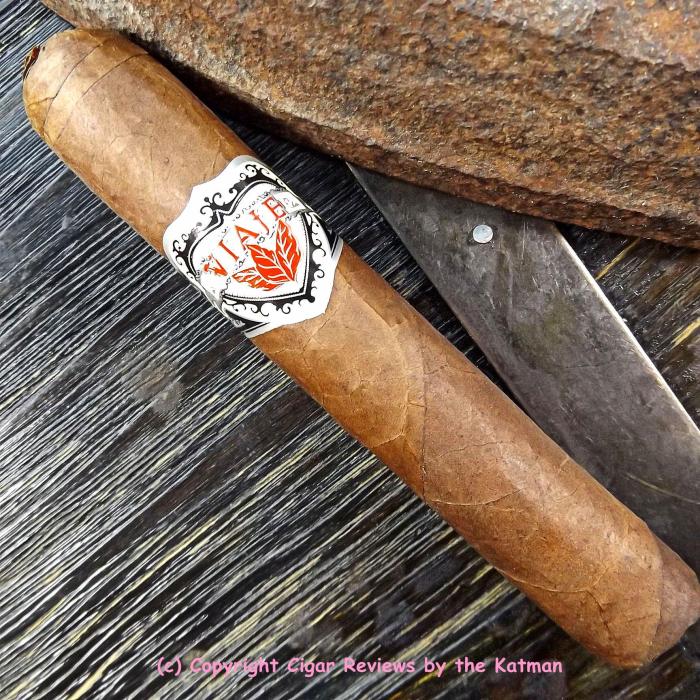 Today we take a look at the Viaje Exclusivo Leaded. Gifted to me by Brian Gulley.

The Leaded came out last month.

The Leaded uses Medio Tiempo tobacco. It is the highest priming of the tobacco plant and considered, by many, as the most flavorful. As well as the strongest.

The Leaded comes in one size only. Only 12,500 cigars were produced.

Everyone is back ordered but I did find one online store that carries them: Berkeley Humidor. Tell them the Katman sent you.

The cigars are made at Fábrica de Tabacos Raíces Cubanas S. de R.L.

The Leaded has a pigtail but Brian must have kept it as a souvenir. Probably thought it was a circumcision remnant.

Lovely, but manly, reader Tyler warned me in a comment to gird my loins before lighting up and to make sure something is in my stomach so I had a bowl of cereal and a plate of liver and onions for breakfast to make sure I would be OK.

The Viaje Exclusivo Leaded is a nice looking stick. The wrapper is rusty brown with some oiliness and very smooth. Seams are nearly invisible. Not too many veins. A well done triple cap MINUS the pigtail. And a closed foot. The cigar is packed tightly.

I clip the cap and find aromas of spice, gingerbread, lemon citrus, earthiness, sweetness, and a bit of leather.
Time to light up.

The first puffs are full of cocoa. Red pepper soon follows. And then cream, sweetness, very toasty, baking spices, and earthiness.
The draw is absolutely spot on.

Right from the start, the Viaje Exclusivo Leaded is very flavorful and rich. I get a little bit of exotic dried fruit…like pineapple. Works in tandem with the citrus flavor.

The char line is on the money.

I was expecting to be bowled over by strength by now but it ain’t so. I’ve got an inch or so burned and it remains at medium body.

The flavors aren’t bad but they are static. Going nowhere fast.

The creaminess is holding the whole thing together. 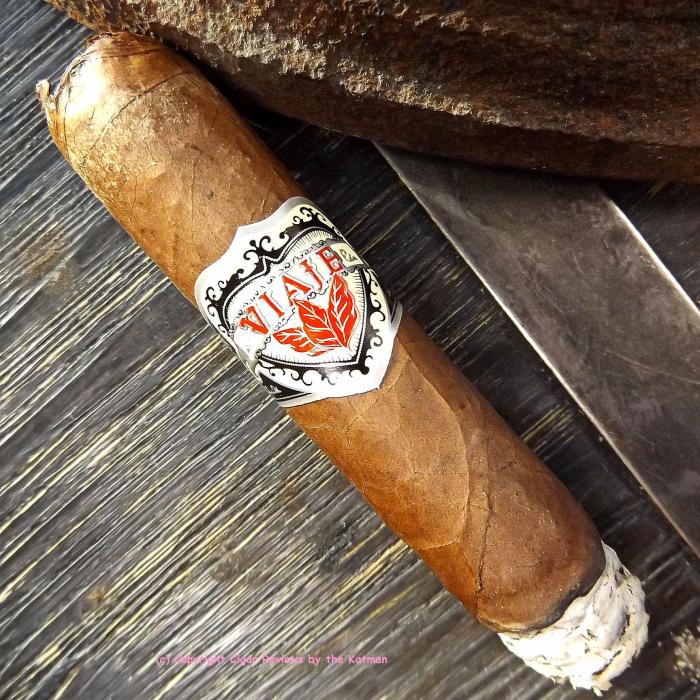 For me, a superb cigar has layers. It builds on what comes before. The Viaje Exclusivo Leaded started off very brash and then flattened out. Don’t get me wrong, it is a nice cigar but somehow I always expect more this from an Andre Farkas blend. I am jealous of guys who can afford to snag the new cigars right away. I just can’t do it. So I mostly find myself playing catch up. I guess it’s the price I have to pay for not having a decent cigar store closer than 100 miles away. Nor having a pocketful of sponsors. The price one pays for being an outspoken grouch.

It is at this point, that complexity settles in. Flavors perk up. The red pepper gets a little spicier. And the flavors: Creaminess, spice, citrus, dried pineapple, cocoa, toasty, nutty, leather, and earthiness make more of an impression.

The balance improves. And the finish is sort of mid-level. The only thing that really lingers is the creaminess.

Every single ash has fallen into my lap. It grows to about ¾” and then disengages while the cigar is in my mouth.

The Viaje Exclusivo Leaded is only a tad bit stronger than medium body.

Sips of water heavily reinforce the creaminess and citrus. This is not my favorite Viaje blend. Viaje Cache remains my fave. I’ve reviewed 17 Viaje blends, not counting this one, and I find a pattern. The older blends appear to have made the most impact on me. The newer ones seem too kitschy and gimmicky. The old Reservas and Oros and Platinos, and the earlier Exclusivos were better blends.

Notes of wood and caramel show themselves for the first time.

If this was going to be a ball bustin’ cigar, it should have been so by now. The Viaje Exclusivo Leaded has not been out that long that extensive humidor aging would have mellowed them out. I find this odd.

I failed to mention if I thought the Viaje Exclusivo Leaded was worth $9.44. Nope. It belongs in the $7-$8 range. Maybe less. But that damn limited run BS is a license to steal and hype the cigar.

The strength moves to medium/full and brings with it some nicotine.

I expected more from the Viaje Exclusivo Leaded. The dominant flavors of cream and citrus overwhelm every other flavor. The cocoa is gone. The nuttiness and toastiness are barely noticeable. The caramel is barely hanging on. 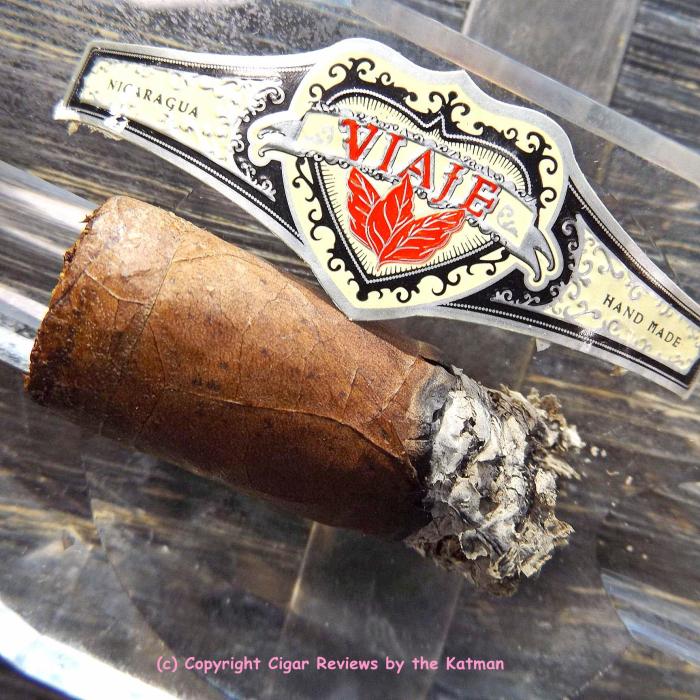 The complexity is gone. The balance is off kilter. And the finish is strictly cream.

I sit for a few minutes and just quietly puff away crossing my fingers that there will be a resurgence of flavor and newly found power.

Finally…some action. Flavors go from flat to bold. But this is not a kitchen sink blend. It keeps the flavor profile to a minimum. But now the caramel moves to an equal standing with the cream. The toasty and nutty notes return.

The construction of the Viaje Exclusivo Leaded has been pretty good. No touch ups of the burn line required. The cap held up pretty well. And no wrapper issues.

Brian sent me some photos of his coolidor and there sits a box of Viaje Exclusivo Leadeds. I appreciate him sending me a sample but, man, I’m glad I didn’t fork out $236 for a box. It is a pretty impressive collection of fine cigars. I’m green with envy.

If it were not for Brian, I would have no cigars for review.

The Viaje Exclusivo Leaded never exceeds medium/full. And even the nicotine disappears.

This cigar belongs in “The Katman’s List of 121 Great Cigars in the $5.00-$6.50 Range.” Except for the fact it isn’t in that price range. Which it should be. There are literally dozens and dozens of cigars in the list just as good as the Viaje Exclusivo Leaded.

The cigar finishes out pleasantly. But this is a one trick pony flavor profile. There is no harshness, bitterness, or heat.

I recently posted a press release for the Screw Pop Cigar Cutter. Brett sent me two samples. One in stainless and one powder coated black. The black one had a spring that is too tight. So Brett is replacing it. The stainless finished one works much better but this is a two handed tool. I would love it if it would have been a one handed device since I smoke so much in the car. But it’s not. I also find that it has trouble getting a really clean cut. Each time, it leaves a little bit of the cap whirling in the wind.

I can’t recommend the Viaje Exclusivo Leaded at this price range. I only had one to sample so that brings up issues about consistency that I cannot discuss. But if you are at least curious about having your own experience, go to Berkeley Humidor.

BTW- It is reviews like this that don’t endear me to possible sponsors. Oh well. The truth will out.