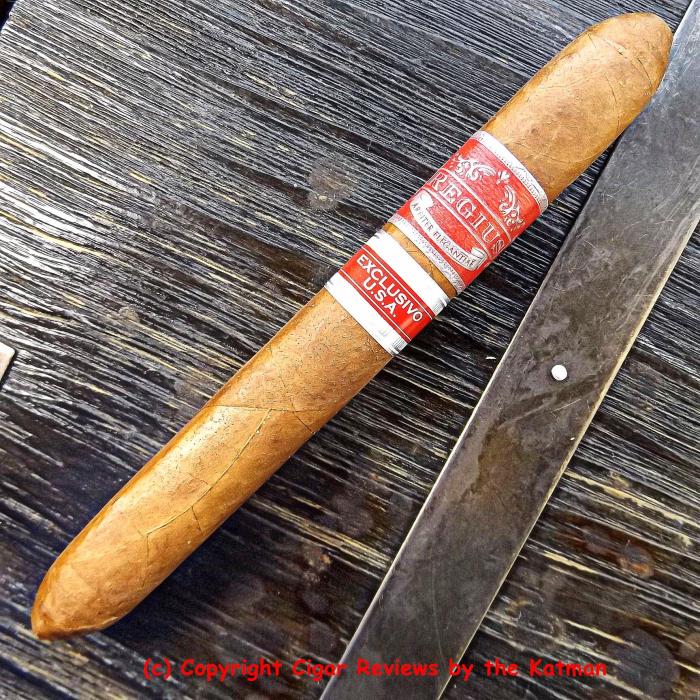 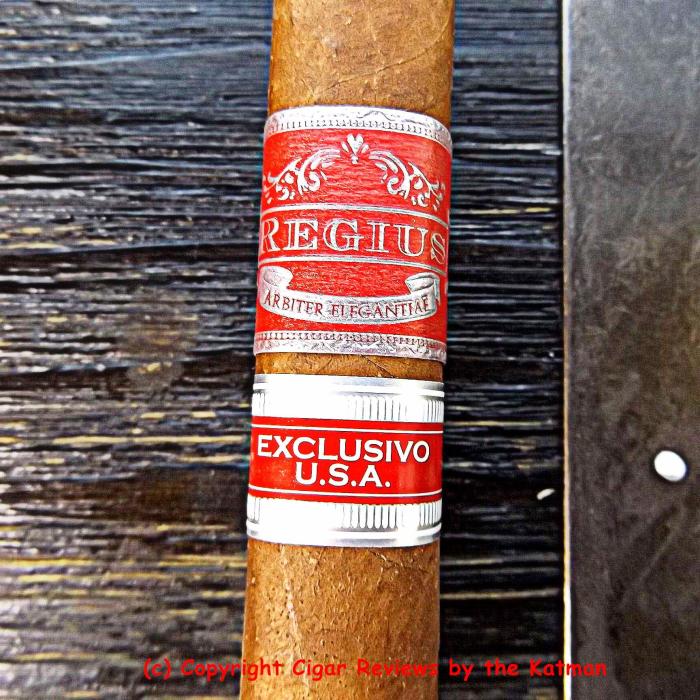 Today we take a look at the Regius Exclusivo U.S.A. Pressed Perfecto. It appears I’ve reviewed the releases from Regius in backwards order of release. So be it.

HISTORY:
Regius is a British based company. A couple years ago, their aim was to take over America and get back from the Yanks who stole it in 1776.
This was the company’s first cigar to debut in the States. And the first store to have the fun of selling them was Casa de Montecristo in Chicago.

From Cigar Aficionado:
“I wanted to make a cigar line that incorporated traditional flavors with the modern and inventive sizes that the American market demands,” Regius CEO Akhil Kapacee told Cigar Aficionado.

“Exclusivo U.S.A is rolled at the Plasencia Factory in Nicaragua and distributed by Quesada Cigars. The blend features a Nicaraguan wrapper grown in the Jalapa Valley, Nicaraguan binder, and Nicaraguan filler that includes Ometepe tobacco. Depending on the size, each cigar in the line features a slightly different flavor profile to complement its shape. The Nicaraguan puros are available in four sizes—Pressed Perfecto, 6 1/2 inches by 54 ring gauge; Fat Perfecto, 5 3/4 by 60, Toro Extra, 6 1/2 by 56 and Lancero Extra, 7 1/2 by 42—with each size priced at $12.95.

“The whole idea of an American release is similar to the regional editions we see from Habanos SA and the Cuban Market.

“Each size is blended differently to accentuate the shape and tobaccos used.”

DESCRIPTION:
This is a giant honker of a stick. I got up at 3am to start so I could be done by 10am. But it is a gorgeous honker of a stick. This is some beautiful workmanship by the rollers. The incredibly difficult job of rolling a perfecto that becomes box pressed takes some mighty skills. And this is just perfect. Pardon the pun. For the most part, seams are tight. The press is exquisite. The wrapper is a dusky brown that has a nice oily sheen. And very smooth to the touch. The nippled closed foot is perfect as nipples go. The triple cap is flawless with a nice flat surface at the very top.

I want to thank Johnny Piette of Prime Cigar Co. of Brookfield, Wisconsin for gifting this stick to me from his personal stash.

COLD DRAW NOTES:
There is a strong aroma of honey and vanilla. Plus an even stronger dose of cedar and new leather. Along the shaft is a hint of coffee.

FIRST THIRD:
I never clip a closed foot. I allow it to burn away and keep a close eye on it.

The Regius Exclusivo U.S.A. is a jam packed log. A flea could not lay an egg inside this baby. The draw, at first, is a little rough so I give in and clip the foot. I also massage the cigar to loosen it up a bit. And voila! Perfect draw. 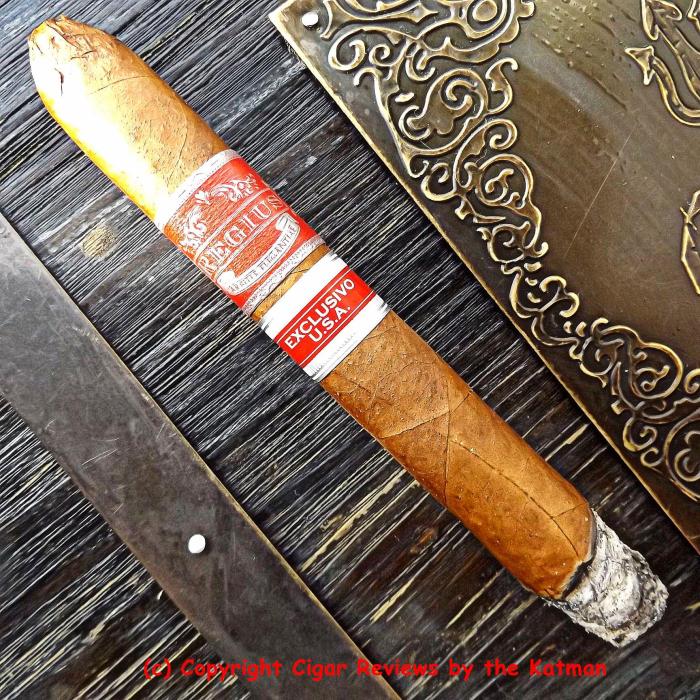 The first set of flavors is made up of sweetness and spicy cinnamon. Following that are Asian spices….Like mitosis, the sweetness splits into two flavors and that second flavor is butterscotch. Quickly following that is coffee. It is mild and unobtrusive.

Flavors keep on coming. Wood becomes a strong influence. A green vegetal influence makes its debut.
The Regius Exclusivo U.S.A. is just pummeling away at the Vegas Wheel of Flavors.

Milk chocolate is next. And then a touch of nuts. Like my readers. And the hits keep on comin’.
The burn gets a little wonky and requires a minor touch up.
Creaminess arrives boosting the other flavors.

The first third appears to be a warm up for the second half where I believe the flavor profile will become more impressive. 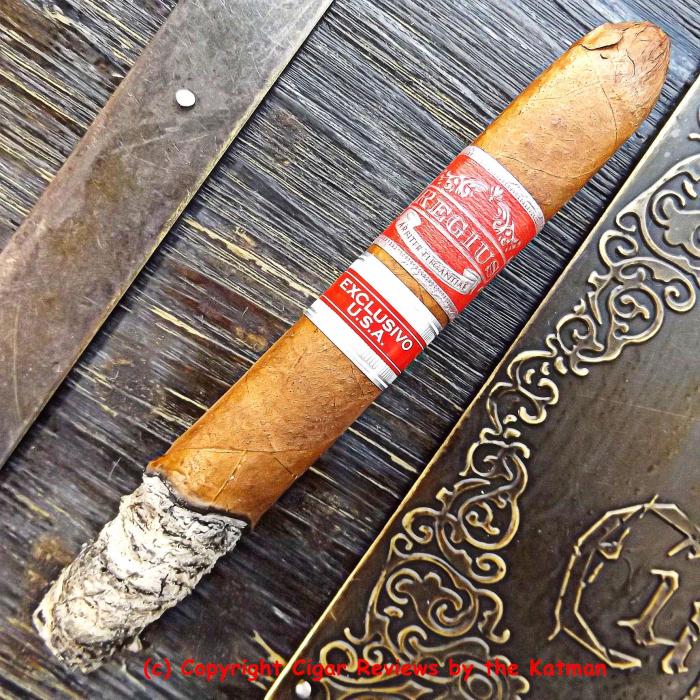 I do believe that this particular blend was simply a good start that would lead to a refining of the blends for American preferences.
The strength is a weak medium body.

While it has been pleasant up to this point, it does not impress.

SECOND THIRD:
Regius CEO, Akhil Kapacee, clearly stated that each blend was designed for each particular size and shape. He may have missed the mark on this large log. The flavors, while somewhat entertaining, are not the bold interesting flavors found in the Regius Black Label or the Regius Seleccion Orchant Limited Edition. These were superb cigar blends. The White Label and the Claro Especial were on the same par as today’s reviewed blend. Good, but not great.

As the cigar nears the halfway point, flavors do begin to blossom. The butterscotch, coffee, sweetness, cedar, cinnamon, and milk chocolate begin to sizzle. The Asian spices have seen their demise. The creaminess is on the wane. Too bad.

Regius reminds me a bit of Viaje. Both manufacturers are capable of wondrous things with the blending of cigars while at the same time can produce duds. 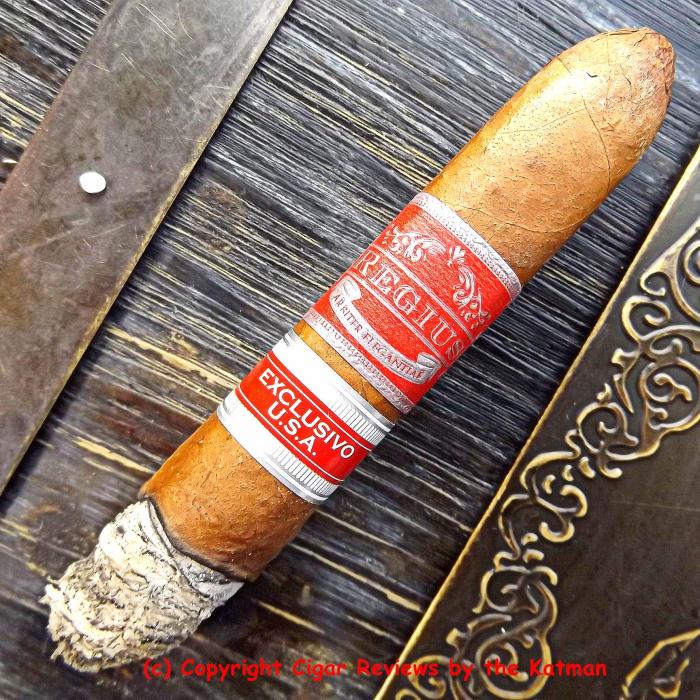 The starting pistol goes off and the chocolate is off and running. Nice.

The Regius Exclusivo U.S.A. comes in only four sizes as listed above. There seems to be no middle ground. Either you buy a log or a lancero with a very tiny ring gauge of 38. Too small for me. You have to smoke the damn thing with your face hanging over an ashtray because the ash falls off constantly. Lanceros tend to be fast smokes.

Regius of London would be better served if they had stuck a robusto or corona in there somewhere.

HALFWAY POINT:
The strength is a solid medium body.
The char line has been tamed for a while now.

But the draw has been a bit of trouble. A lot of cheeks collapsing sucking on this thing. It is over packed somewhat. I use my cigar awl but an inch in; I hear some cracking noises and carefully withdraw the awl. But regardless, it has helped immensely. 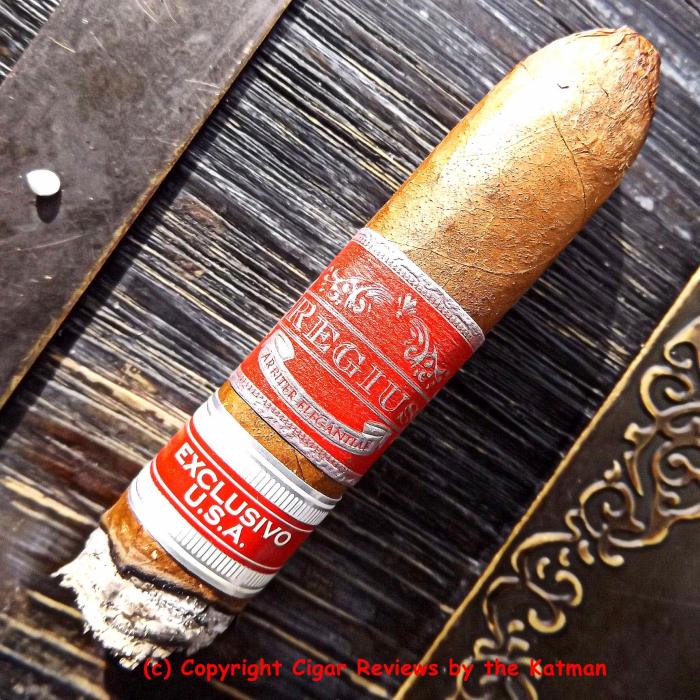 As predicted, the flavor profile makes a real ardent surge now. It has felt like the cigar was in hibernation this whole time and now the mighty grizzly has awakened.

Listening to cable TV oldie’s station. They just played the theme from the James Bond movies. I don’t remember that being a single. But when I played in the Todd Hart band in Phoenix, we would open with that and then segue into Buddy Mile’s “Them Changes.” It was pretty cool and the crowds used to love it. Finding cool transitions can take an average cover band and move it up to great cover band status.

Here are the flavors: Sweetness, chocolate, coffee, butterscotch, creaminess, cedar, honey, and wood. And some newly acquired red pepper. That gives the blend the extra oomph it was lacking.

The flavors now have the same intensity as a robusto or corona. Too bad it took half the cigar to get there.

LAST THIRD:
The Regius Exclusivo U.S.A. is now burning on all six cylinders. Finally. It finds its complexity and balance. But has a short finish.
I remove both cigar bands and the box press is so sharp and crisp that it leaves severe creases in the main band. Will be tough to flatten out for photos.

And as with all Regius blends, at one end of the main cigar band is a list of initials of the folks who were a part in the blending of this cigar. I think that is very cool. 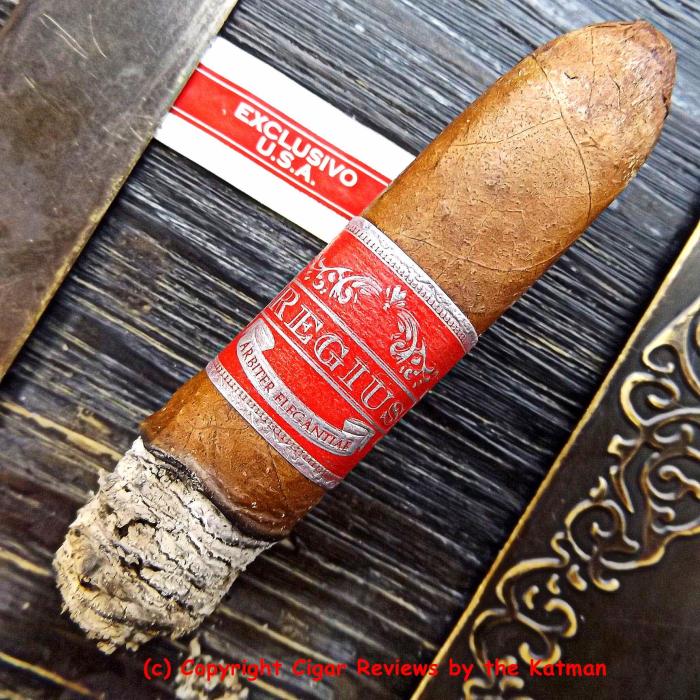 But as it turns out, it is that best part of the cigar. 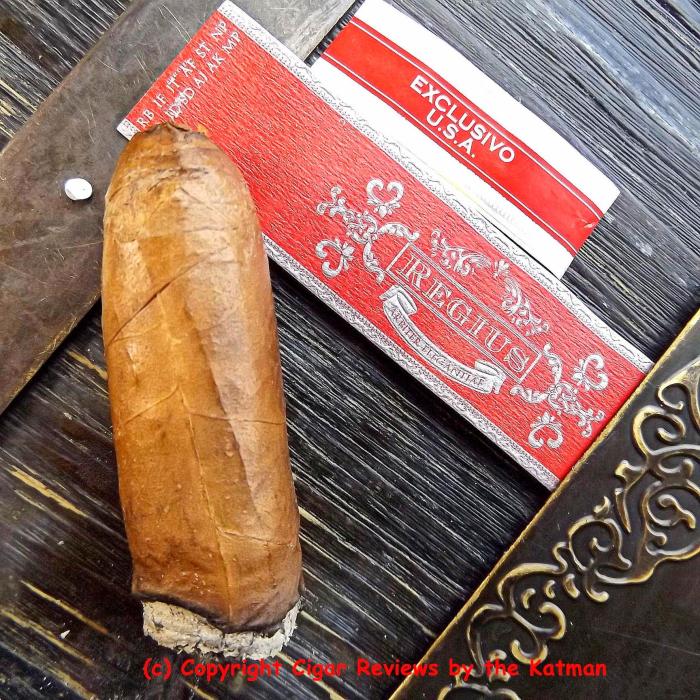 The flavor list stays on point without changes except that the spiciness changes from red to black pepper.
The last third is a delight. 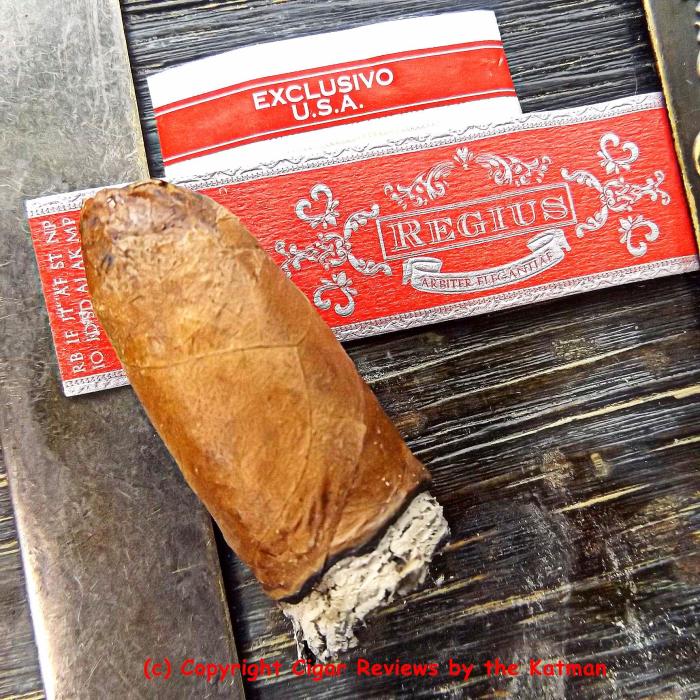 The strength moves to medium/full in body. And nicotine settles in. The spiciness goes pedal to the metal. Too little, too late.
The Regius Exclusivo U.S.A. finishes a bit hot but not harsh.

PRICE POINT:
There is no way in hell that this cigar is worth $13. I seek out online stores that carry the line and I find one that carries a robusto for $9.20. Must have been added after the interview from Cigar Aficionado. That’s the cigar I should have reviewed. Probably added in 2014.

SUMMATION:
I do some checking around at other reviews. They are as different as apples and oranges. Some lean towards my assessment and others think it is the best thing since sliced bread. And all are different sizes reviewed. I didn’t find my size.
It is clear that each size was blended accordingly. I read flavors that were almost completely different from review to review.

For $13, I expect fireworks. Only the last third provided that. In fact the final third of the Regius Exclusivo U.S.A. was amazing.

I do know that Johnny only sends me well aged sticks. So humidor time is not an issue.

The bottom line is that this Pressed Perfecto was not blended correctly for its size. A shame that this was what I had to work with. But then the other reviews of different sizes saw pretty much the same experience as I had. While others loved the stick they reviewed.

Small Batch Cigar is a good place to get your Regius of London on. But they don’t have this size but do have every other size and blends. Based on their pricing, I’m guessing they would have sold this size for around $11 instead of $13. Their discount of 10% with the coupon code would bring it down to $9.90.

But based on my experience today, I still would not purchase this size again. I would like to try the robusto or fat perfecto.
I cannot recommend the Regius Exclusivo U.S.A. in the Pressed Perfecto size. With only the last third being outstanding it just isn’t worth the dough. 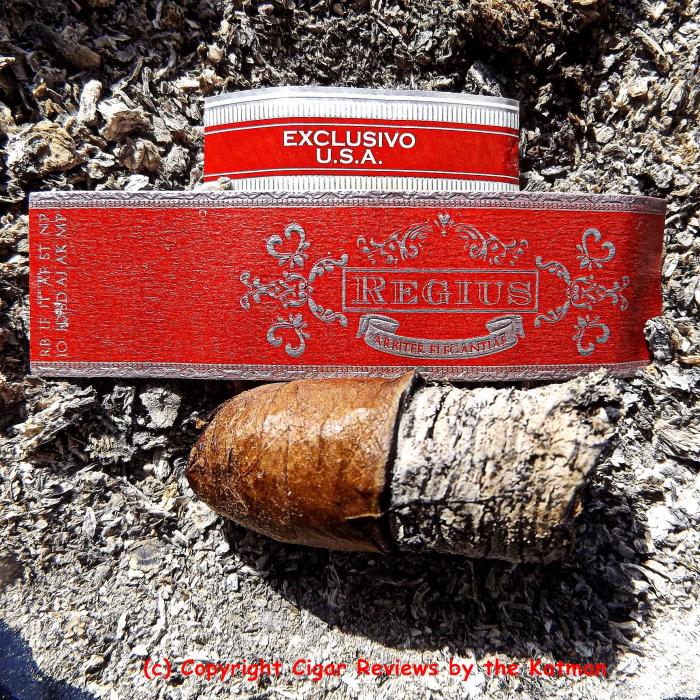