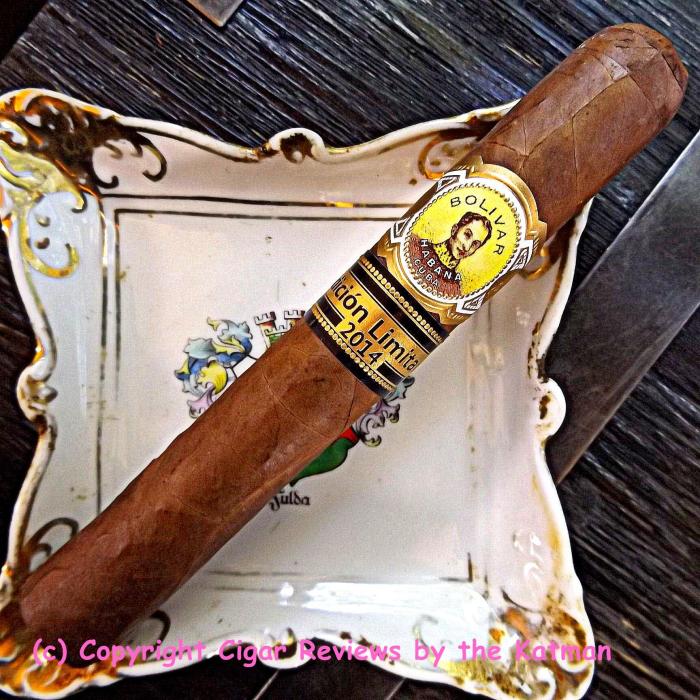 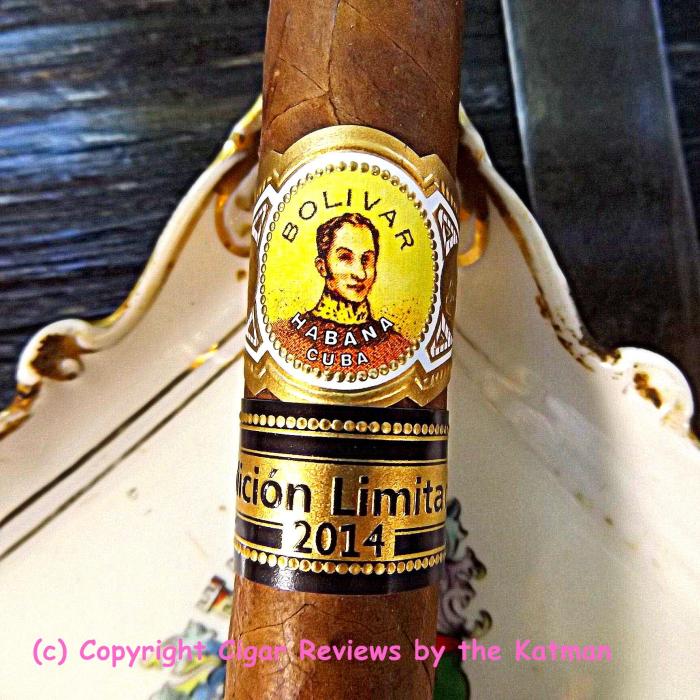 BACKGROUND:
From the Canadian Cigar Co.:
“Introduced in 1901, the powerful flavour of the Bolivar range is almost as widely known as its namesake, Simon Bolivar (1783-1830), the celebrated Venezuelan warrior who liberated all or part of what is today Venezuela, Columbia, Peru and Bolivia. This Cuban cigar brand was developed by the Jose Rocha Company and manufactured at the El Crepusculo factory, but was later acquired by Menendez, Garcia y Cia.”

Beginning in 2000, the Edición Limitada series became a reality. The cigars differ from other blends due to the extensive aging of the tobacco.
Habanos S.A. released three Edición Limitadas per year. In 2014, it was:

DESCRIPTION:
A very rustic looking stick. Only a modicum of oil on the wrapper. Tight seams. Lots of veins. A very nicely applied triple cap. Lumpy and bumpy. And a small amount of toothiness.
It is a very solid stick with no soft spots but the right amount of give when squeezed.
Each Edición Limitada also includes a double cigar band. The main band is the regular Bolivar band. The secondary band is gold and black and indicates the year it was released.
Prices vary from $20 to $35 each.

FIRST THIRD:
The draw is a bit tight but that doesn’t stop the cigar from sending plumes of smoke into the air.
The first flavors are meaty, coffee, cocoa, toasty, sweet, and a dose of something fruity.
Now this is how an expensive cigar should start. I rail and piss and moan all the time about costly cigars that don’t kick in till the halfway point; or even the last third.

When, in reality, they should kick my arse from the first light. 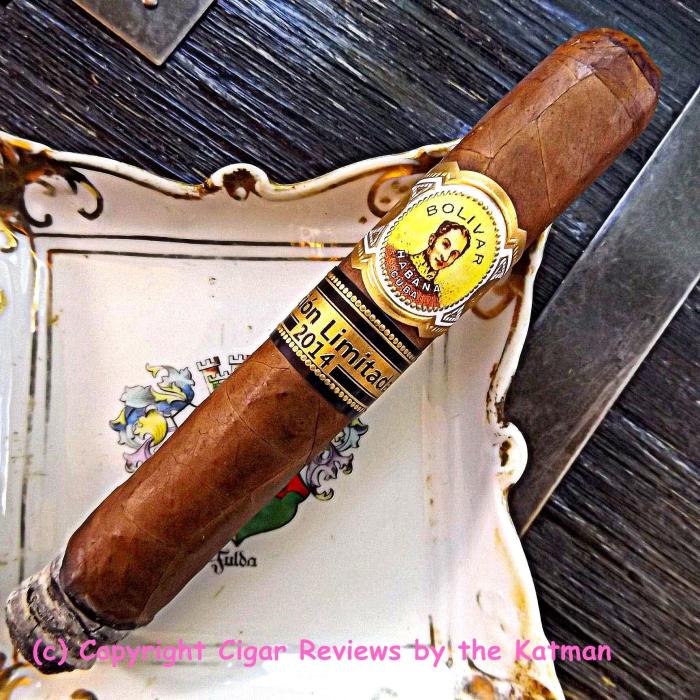 There are some nice herbal notes mixed with some type of tea. A little bit of licorice. And the start of some spiciness.

Creaminess appears making the flavor profile more cohesive…pulls and tugs and reins them into a circle to ward off the barbaric attackers.

Mind you, as flavorful as the Bolívar Super Coronas Edición Limitada 2014 is, these are all subtle notes. Nothing bold or bleating like a goat.
The char line is a touch wavy but no touch ups required.

I’ve been lucky enough to have a few readers send me Cubans. And I’ve come to realize that these babies need years and years of humidor time.
I started reviews on several of them only to stop for various reasons. The cigars sent to me were from a couple years old to 5 years old. But they got very hot. Flavors didn’t kick in til halfway through. And the last third was very harsh. So I dumped the reviews.

I’d like a little more oomph. So far, I’ve found most of the Cubans I’ve reviewed kicked into full body in the last third. This stick may do the same.

On aging, I got some info from a very reliable source:
“I have that issue as well. Non-Cuban cigar makers pre-age their tobacco bales in massive quantities for two or three years before rolling cigars. They also age them for a several months to years after rolling too. Cuban cigar makers do not do any significant aging of the raw tobacco or rolled tobacco. The only exceptions to this would be the ‘Reserva’ batch they release each year and the new ‘Anejados’ offering.

“Cuba can barely keep up production for the high world demand and are at the mercy of the weather. Last year’s crops got smashed by bad weather and the ultra-rare Medio Tiempo leaves were in not enough supply to meet demand.

“So they rush things to fill orders. It’s not financially feasible for them to age cigars.
“I’ve read that long term aging is a crap-shoot anyways. Some get better, some worse. The majority of Cubans do get better but…smoking a fresh Bolivar Royal Corona is a wonderful experience. Extra peppery, spicy, leathery, and strong. Sure they get smoother over time but the strength and potency decreases. So it’s a trade-off.”

Thank you my wishes-to-be-anonymous reliable source.
Not much is happening as I’ve burned 1-1/2”.

SECOND THIRD:
I’m a little disappointed in the first third. It started off with a lot of promise and then just floundered.

The sun comes out and shows that there is a nice bit of oiliness on the wrapper.

But with the start of the second third, things are livening up.

A stewed prune flavor shows up. You probably had to grow up in a family of Eastern European origins like I did. Stewed prunes were always available at home. Most kids can’t stand them but I loved them. I don’t believe I’ve ever mentioned this but on my father’s side, I am Hungarian and on my mother’s side, I am German (Yikes! The enemy!). My father’s and mother’s parents were smart enough to get the hell out of Dodge around 1933 when things flew into motion with the Third Reich movement. The rest of my family never made it out.

Stewed prunes. What a delightful surprise. And some generic sweetness. Lots of it.
There is another dried fruit element: Golden raisins. 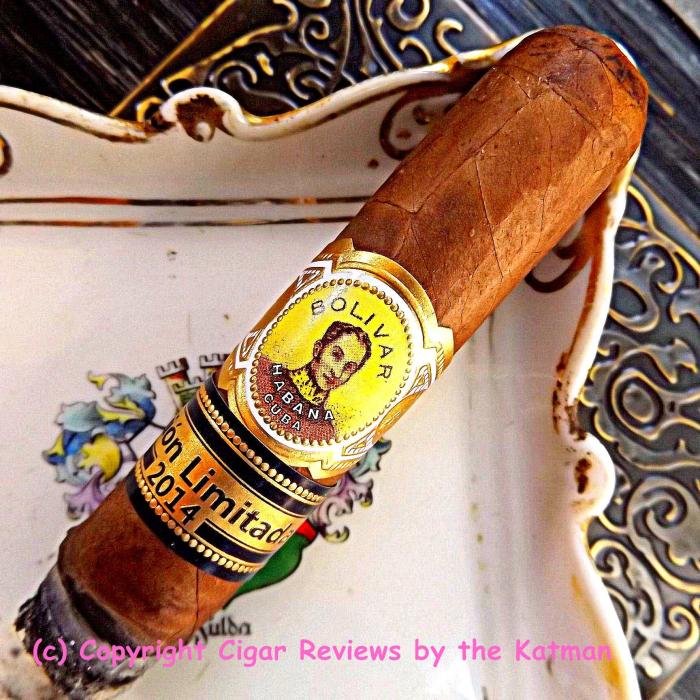 And then the hits keep on coming with heavier toastiness, nuts, wood, cedar, leather, strong baker’s cocoa, espresso, and very rich earthiness.
The original flavors of creaminess, spice, and meaty still hang tough.
The spiciness is in the middle of the pack. I’d be happier if it were more upfront. That’s just me. I’m a spicy junkie.
And then, of course, the spiciness ratchets up. (Schmuck).

HALFWAY POINT:
In a previous Cuban review, I provided a definition of what the “Cuban Twang” is. I shall repeat it once again:
This is from Gregory Mottola of Cigar Aficionado:
“Cuban twang is nothing more than too much acidity in the tobacco. It is connotatively referred to as “aspereza” in Spanish—anything harsh or unrefined. Comes from cigars rushed to the market and is generally considered a negative trait, though some people say they like it. One of the purposes of aging cigars is to allow the acidity to dissipate, making way for more sophisticated floral, sweet and savory flavors.”

I’ve seen countless smokers referring to the “Twang” but in good terms. Clearly, they didn’t understand the true definition of the term. Now we all do. Thank you Mr. Mottola.

The Bolívar Super Coronas Edición Limitada 2014 is a very nice cigar but it needs years of humidor time. It has a nice flavor profile. A nice balance. A so so finish.
But it ain’t knocking my socks off. There aren’t dramatic transitions. The complexity is a at a low level.
Methinks the last third will do the trick.

And right after I write about the deficits of this blend, it begins to soar. I leave this shit in so you get the real time experience of smoking this cigar. If I smoked it first, took notes, and then wrote the review, it would be very different. I’d take out all the shit that makes me look like a dumb ass.

The kick in the ass from the new strength emboldens the flavor profile.
The earthiness has been left out in my description of the blend. The Bolívar Super Coronas Edición Limitada 2014 has a very rich earthy flavor that really didn’t appear until the start of the second half. It has a nice mineral touch. You can almost taste the soil.

Nicotine kicks in. My nemesis.

While I might have some sort of lesion in my brain, I also have one on my scalp that has really been bothering me.

So my dear wife did surgery on my yesterday. Charlotte has a master’s degree in psychology so close enough. Ever live with someone who knows what you’re going to say before you say it? Oy.

I won’t go into the gruesome details but it seems to have worked. A rough night but I’m feeling much better this morning. There was no way I was going to the ER. That’s where you go to die. Back in December, I went to the ER and I ended up spending three days in the hospital. No thanks.

Back to the Bolívar Super Coronas Edición Limitada 2014. The complexity is stronger. The balance is spot on. And now a nice long finish.
The licorice factor has gotten stronger which makes for a weird combo with the peanuts.
Creaminess makes a big comeback. So does coffee.

Like so many Cubans I’ve smoked, the flavor profile doesn’t really kick in until the second half. Is it aging? I have no idea.

I read in the Connoisseur’s Corner of Cigar Aficionado this month where a 15 year old Cuban was rated. The reviewer said it still needed a few more years. WTF?

I truly envy smokers that can afford to buy good cigars and then put them away for two decades. Now that’s discipline.

I read a review of the Bolívar Super Coronas Edición Limitada 2014 in which the reviewer stated that the blend never got stronger than medium body. I can’t remember how much age was on the cigar as I don’t remember the review. The point is that I wonder if it had too much age on it? Because this blend is going to hit full body very soon.
Smoke time has been 45 minutes. 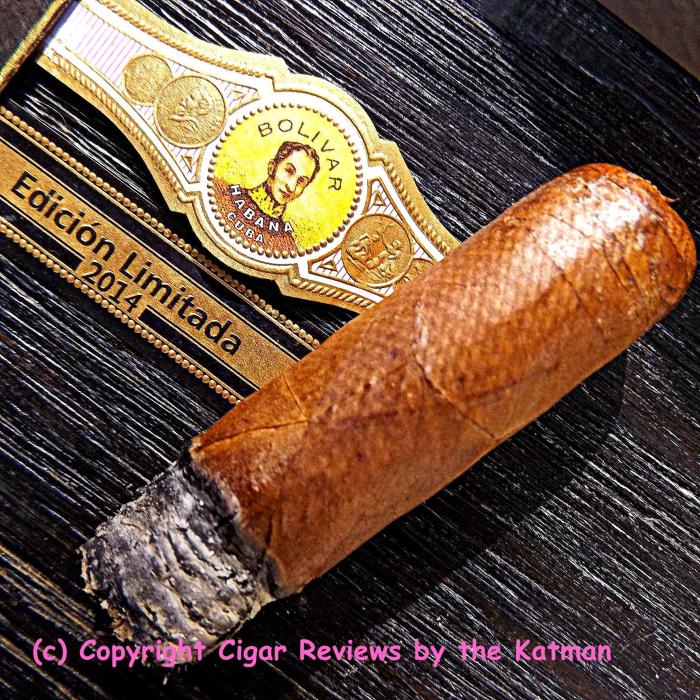 Construction has been impeccable. Most Cubans look like shit. Totally belies their perfect construction in most cases.

I’m smoking the Bolívar Super Coronas Edición Limitada 2014 very slowly for two reasons: I want to savor it. And second, I have 2” to go and I don’t want to crash and burn from the nicotine.
Wood becomes very prevalent. The spiciness is off the charts.

I’m surprised I haven’t had to go pee with all the water I’m drinking. Each sip washes all those flavors against my palate and explodes. I worded that incorrectly. A palate is not a “thing.” It is the ability to taste flavors.

With my brain related issues, I have a palsy-like symptom with my hands. On my photo close ups, I just can’t hold my hands still. Sorry.

Longtime friend, Rick Tunstall, sent me a camera stand. But it won’t allow me to get close to the cigar. I’ve tried everything and I just need something a lot more sophisticated like the pros use.
Unlike the other Cubans I tried to review and then gave up, the Bolívar Super Coronas Edición Limitada 2014 does not get hot or harsh at the end. Smooth and cool. Like me.

This has been a real pleasure. And the last of my Cuban reviews. I hope you enjoyed them.

PRICE POINT:
As my friend paid a little over $9.00 in Cuba for this cigar, that’s a winner of a price tag.
$25-$30 elsewhere? I don’t think so. There ain’t a cigar in the world worth that price. That’s just plain greed. I refuse to buy the expensive Padron blends. Their price points are insane. Plus they need years of humidor time.
Visit my lists of great cigars on the left side of the web site page and you will find hundreds of regular production and boutique brands that are terrific and stay under double digit pricing.

SUMMATION:
Construction was perfect. A beautiful list of flavors. Perfect balance. And a long finish.
I highly recommend this cigar. If you can get it at a reasonable price online, go for it.
While this cigar has less than a year on it, it was a real treat. My patron doesn’t want me to name him. He is afraid his mooch friends will find out. “You’re giving the Katman cigars and not me?”