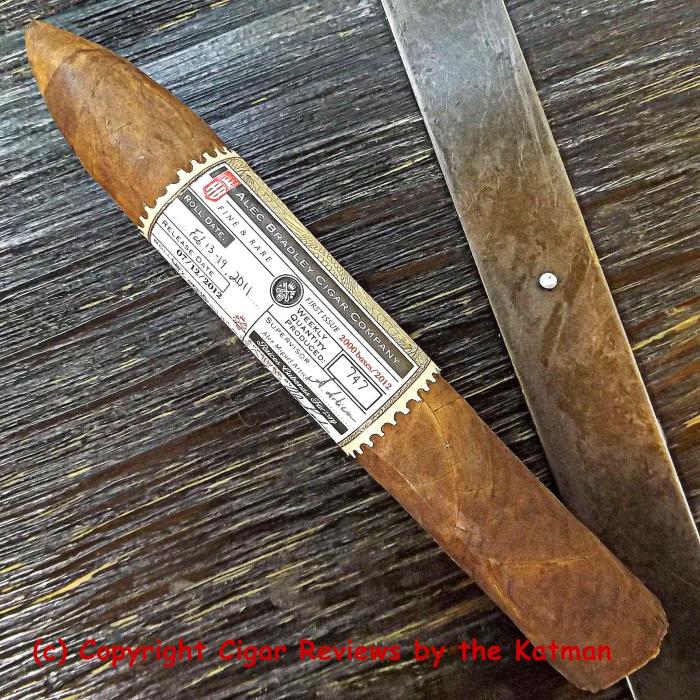 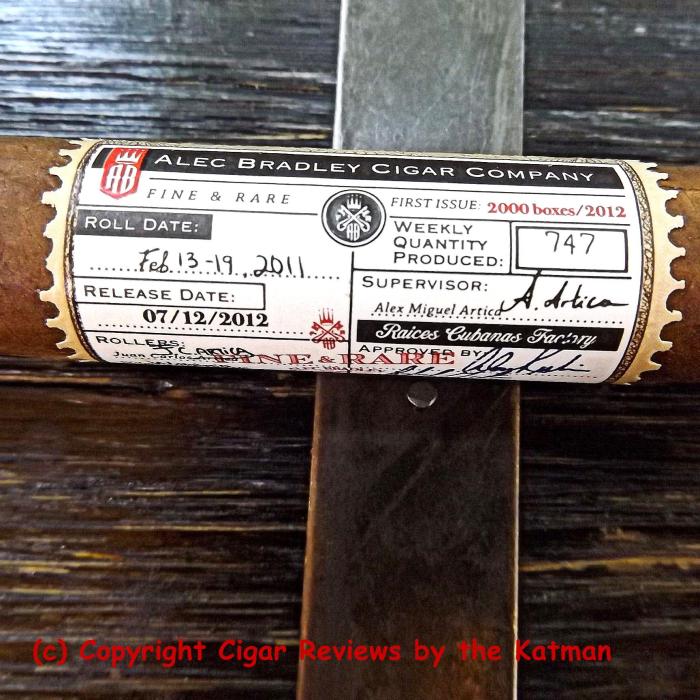 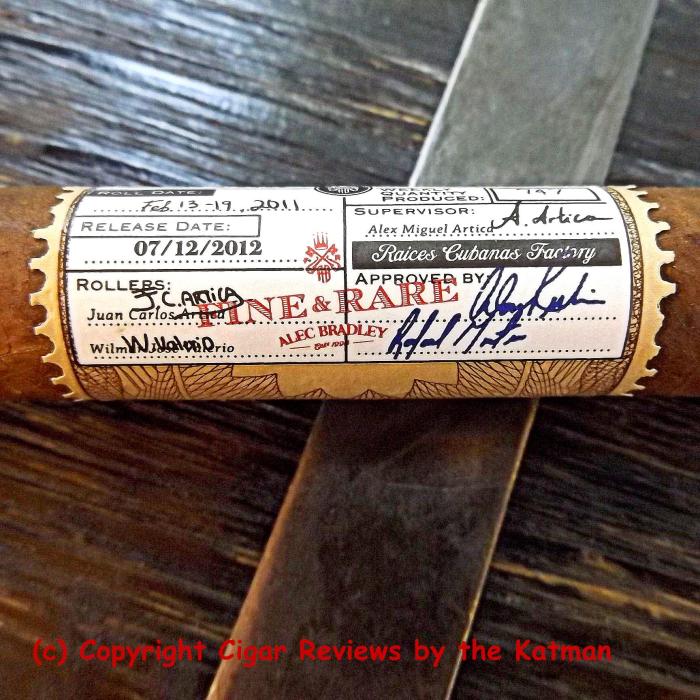 Today we take a look at something that seems to be worth its weight in drugs now: the Alec Bradley Fine and Rare Torpedo 2012.

BACKGROUND:
From Cigar Aficionado:
“Alec Bradley, the maker of the No. 1 cigar of 2011 with its classic Alec Bradley Prensado, had a bold plan for a new type of smoke. Brand owner Alan Rubin and his team called upon experienced rollers at the Raices Cubanas factory in Honduras to use 10 leaves of tobacco in one cigar. It was a difficult task that led to the creation of Alec Bradley Fine & Rare, a limited-edition of medium- to full-bodied cigars made with more tobacco than the typical cigar. The first release had no name, but came in one size only, a 6-inch-long, 52-ring Toro. (The follow-up, recently introduced, bears the name 2012, and is a figurado.)

“Fine & Rare is presented in stunning fashion, with an extra-large band showing details on the production, including worker names. The cigar is quite toasty and savory, with some delicious berry sweetness.”

Cigar Aficionado rated it 21st in their Top 25 of 2012.
The release included 2,000 boxes of 10
This cigar is was/is so popular, I need not go one describing it as every reviewer and his brother have written reviews of this cigar.

DESCRIPTION:
It’s a gnarly looking cigar. It has a splotchy and mottled wrapper that has little oil to it. The color looks like a two tone 1958 Edsel. Seams are far from tight. Quite a few veins. But a beautifully applied triple cap.
And of course, the highlight to the presentation is the bookkeeping slip acting as a cigar band. Very clever and interesting. (I sound like Col. Klink).

FIRST THIRD:
My first concern is getting the cigar band off without damaging it. That would be a shame of enormous magnitude. But as this cigar has been humidor aging for around 3 years, who knows what condition the glue is in?

The black pepper is going for it. It just keeps on keeping on. It went from a nice spicy element to a nuclear one that has me crying as I write these words.

More flavors join the hit parade: Coffee, salty pretzel, vanilla salt water taffy, and a toasty component.
The strength bolts from the gate at medium/full.
The char line straightens itself out nicely.

Coffee with cream move towards the front of the line. With spice on their tail.
The taffy element converts to having a creamy nougat flavor. With the nuttiness, it reminds me of a Big Hunk candy bar. “Big Hunk is a long lasting mouthful of chewy, honey-sweetened nougat filled with whole roasted peanuts.” 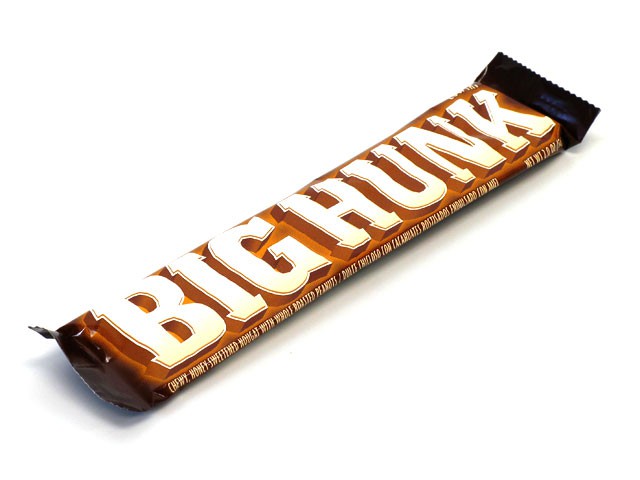 That description nails the flavor profile at the moment if you add some cappuccino to it.
And the caramel morphs to honey; filling out the description above.

This is a monster killer cigar. Jack of the Bean Stalk. This is a premium cigar in all senses of the definition. It is deeply complex. I’ve not had a Cuban that is this good. Bold statement, huh?
And we hit full body. No messing around here.

Roasted nuts become peanuts. The prophecy of the Big Hunk comes to fruition.
I now realize that Cigar Aficionado giving the Alec Bradley Fine and Rare Torpedo 2012 a standing of 21st of the Top 25 of 2012 is ludicrous. Do you know what came in third that year? Romeo by RYJ. Tell me the whole thing ain’t rigged.
The char line needs its first major tune up.

SECOND THIRD:
The char line has now been blessed by the Great Cosmic Muffin.
The coffee tastes like Kona coffee. This exotic blend can run as high as $55 per lb.
Had a friend in Phoenix who bought some land on Kona back in the 90’s and all he did was grow Kona coffee beans. He used to send me some on a fairly regular basis. So I know what pure Kona coffee tastes like.

That is how intense the coffee and cream flavor is.
The big Hunk is on point.

The flavor profile is making constant transitions with each puff. Just amazing.

The dried fruit flavors of raisin and figs are going strong. The caramel became nougat and now there is an addition of Butter Rum. My grandfather loved Butter Rum Lifesavers. And when he visited from Pittsburgh, the first thing he did was pull out that roll and give me one. It was a wonderful bonding experience as a kid. My grandfather spared nothing in spoiling me when he visited but those memories of the Lifesavers remains still.

Coffee now leads the pack by a mile. Behind that is a strong woody presence. Big Hunk behind that. Especially the honey flavor.

The glue and the cigar band have become one. I can’t get it off.
I sweat bullets as I cut it off. But drat! I nick the wrapper about an inch long. Please baby Jesus…don’t let the cigar come apart on me. 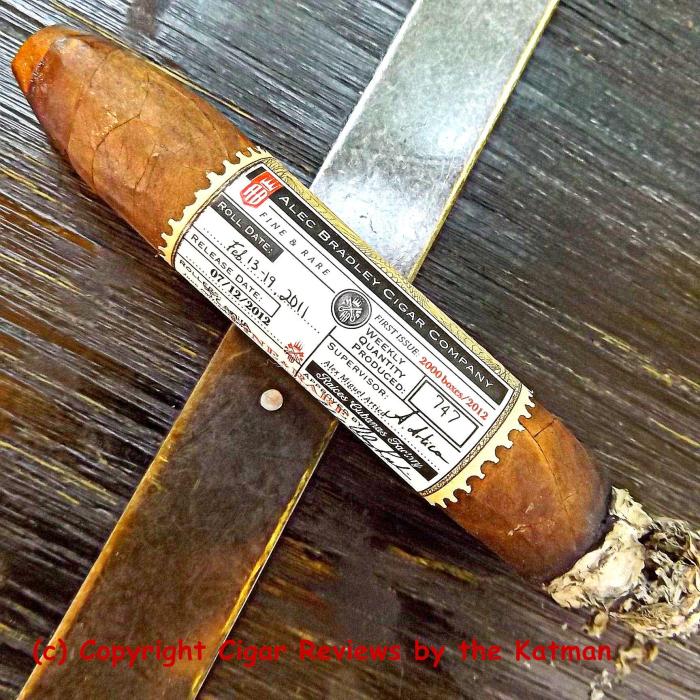 The Alec Bradley Fine and Rare Torpedo 2012 is a magnificent cigar. Just magnificent.
If I were a rich man…

I can smell coffee grounds. And the Kona coffee becomes a dark and exotic espresso. The creaminess has faded. Now we are having black coffee. I don’t think I’ve ever had a coffee element this strong in any cigar I’ve smoked.

The great thing about reviewing a cigar 3 years after every other reviewer has already done so is the end process of long humidor aging. Even if they allowed the cigar a couple months humi time, they didn’t taste what I am now tasting. And the funny thing is that because I sussed out the tight rope Google algorithms, I will still end up on the first page of all the search engines with my review.
I’m getting huge doses of flavor that prior reviews missed. Since I had only one stick, it seemed prudent to add it to my catalog of reviews. Not doing so would be a war crime of the highest order.
The TV cable music channel I listen to plays a lot of Beatles. I love McCartney. He is a brilliant musician and composer. Thank God there is a ton of recorded video of his concerts to remember him after he sheds his mortal coil.

HALFWAY POINT:
Contrary to what I expected, this is not a smooth smoke. Instead, it is very intense. Flavors are bold and in your face.
The black pepper faded in the second third but now it’s back force.

The coffee is so strong that it almost tastes like those icky infused cigars.
But this ain’t icky. It’s natural and refined. I tried the Java blends but they were just too sweet.
So sweet, that all you could taste was the chocolate or coffee. The richness of the tobacco was an afterthought.

The slit in the wrapper is beginning to separate. Thankfully, it is only on one side of the cigar. It won’t affect my photos.

Goddam the Pusherman. This is a mighty fine blend.

And speaking of chocolate, at the halfway point, it becomes a factor. With such a complicated blend, I wondered if I would taste cocoa.

The Alec Bradley Fine and Rare Torpedo 2012 is jam packed and smokes very slowly.
Smoke time has been nearly an hour.

The blend is so complex, that I don’t believe I could provide an accurate listing of flavors. But nothing has really disappeared. Rather, every flavor has become more intense.
Nicotine finally shows up. Oh lord. Still have 2-1/2” to go.

A good friend told me that he is somewhat isolated as no one he knows smokes cigars. So he is forced to smoke alone. That describes me to a tee. But I don’t mind. Smoking alone; especially with a splendid smoke allows you to savor the smoke. Smoking with friends is fun but you are distracted by the conversation.

“Boris the Spider” by the Who is playing. I saw a bootleg concert film of The Who and I watched a bass solo by John Entwistle. It was the most impressive solo I had ever seen. It so impressed his band members that they stopped what they were doing and just turned around and stared. They couldn’t believe it either. A real shame that John succumbed to an early drug related death.

Back to the Alec Bradley Fine and Rare Torpedo 2012.
I don’t know what else I can say about this cigar. It has blown my mind away.
I look again at the Cigar Aficionado Top 25 for 2012 and am mystified by the 20 cigars that were rated better than this cigar. You need to check it out.

LAST THIRD:
Oh lord. The music channel is playing a Monkees song.
Charlotte found these Tees in the basement. Back in the early 80’s when I was producing the Eddie Munster project, we found ourselves in Chicago while promoting our project and got to spend a few days with Peter Tork of The Monkees.
I traded him one of our tee shirts for one of his. 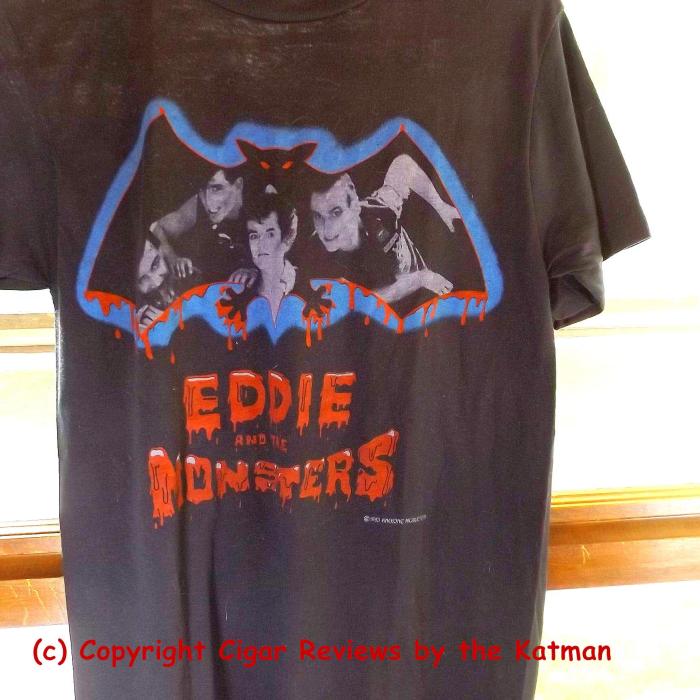 The draw is a bit tough. And I’m getting some tar from puffing so hard. So I carefully use my cigar awl and blew through the plug. Things are swinging now.
The spiciness is roaring.

I can’t say it enough. A remarkable blend.
The Alec Bradley Fine and Rare Torpedo 2012 finishes with flare. Flavors abound. No harshness. No heat or bitterness.
With 1-1/2″ to go, I have to put the cigar down. I am spinning from the nicotine.
Final smoke time is just shy of two hours.

PRICE POINT:
I have zero qualms with the original pricing. It is probably the first cigar I’ve said is worth this much dough: $16.50.

SUMMATION:
I was completely taken aback by the Alec Bradley Fine and Rare Torpedo 2012. I figured it was a gimmick. Nothing could be farther from the truth.
I’ve seen on some FB cigar groups this cigar being auctioned off at $25 or more.
I was fortunate enough to try this cigar so I’m sated. I don’t feel the urge to pay $25 for another.
But I do think that this cigar should be tried by all experienced smokers. This has been a rare experience and I took nothing for granted.
Great cigar! 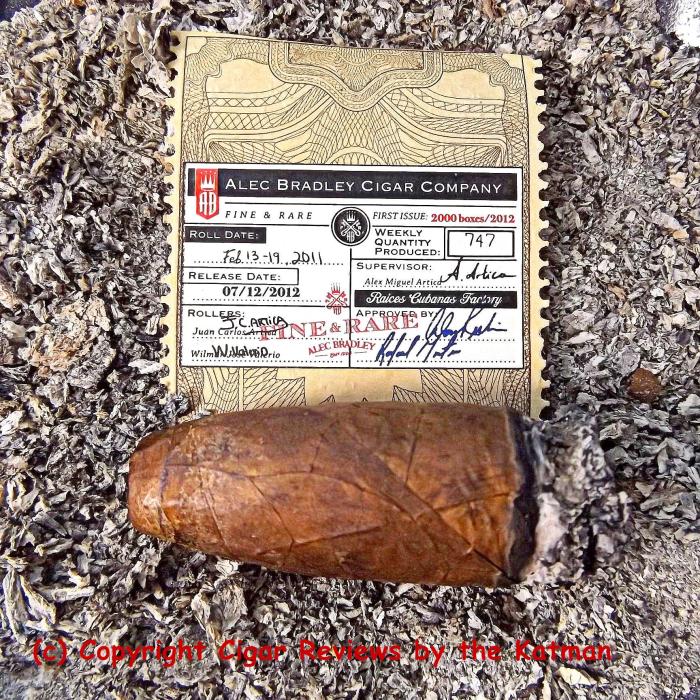 A sample of my Father’s Day gifts from Katie: 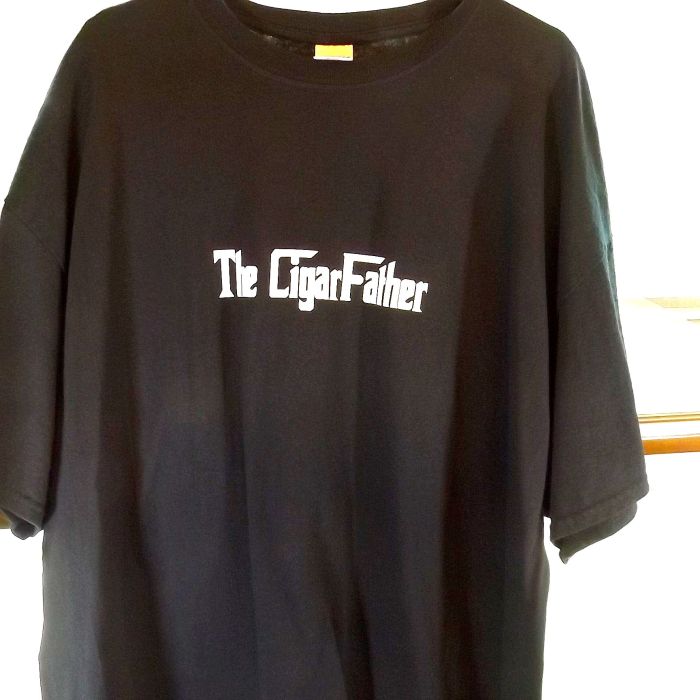 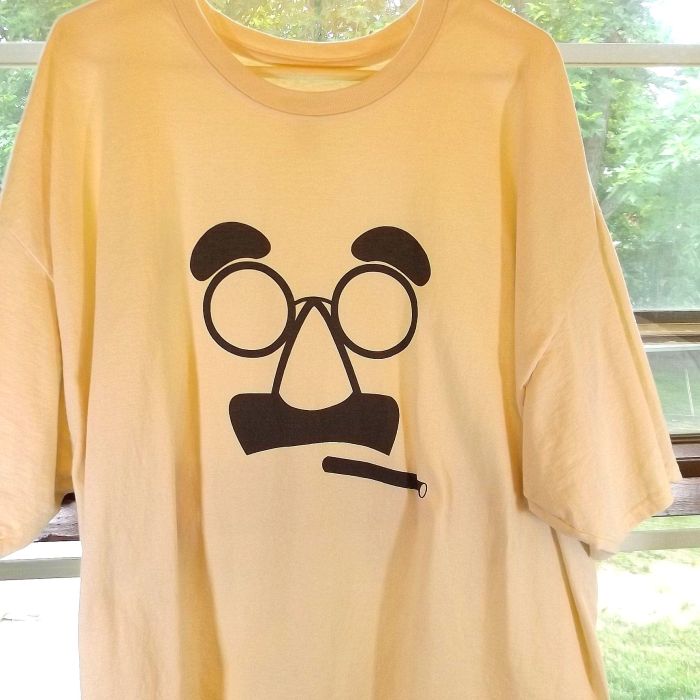