Today we take a look at the Perfecto by Pierson Geoffreys Cigars.

BACKGROUND:
From the Pierson Geoffreys web site:
“Imagine a cigar draped in a flawless Sungrown Habano Claro Wrapper. The construction is impeccable and the draw is effortless, as natural as breathing. Underneath the savory wrapper is a complex blend of Nicaraguan Ecuadorian tobaccos. At first light this medium bodied blend is smooth with notes of coffee and cedar with a hint of sweetness. Its finish is concise with a dash of peppery spice. This cigar is for everyone to try, especially the enthusiast. This is a great smoke from head to foot. Don’t miss out.”

DESCRIPTION:
The oily wrapper is a gorgeous light brown with hints of caramel color. The sticks are solid but not too solid. Seams are tight. Few veins. An impeccable triple cap. And very smooth to the touch.

FIRST THIRD:
The draw is excellent as smoke fills the room and the dog and cat scurry off.
The first flavors are oats cereal, sweetness, wood, and a touch of spice.

Then, as if a light switch had been turned on, the spiciness breaks from its restraints and makes my head do a couple of 360° spins. Love it.
The char line is spot on.
The first couple puffs were generic but now, 3/8” in; flavors begin to head towards the journey one expects from a $15.00 cigar. 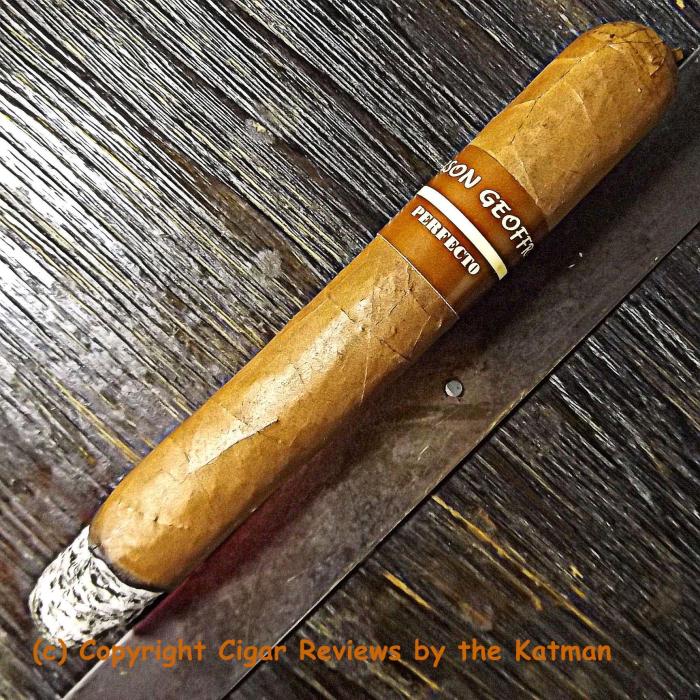 I’m very skeptical of cigars that have this kind of price point so it bears the burden of responsibility to really show off if it wants me to validate it.
The strength is mild/medium. I go into these reviews of Pierson Geoffreys cigars without a clue of the strength. The web site says nothing about this subject.

I expect nothing less from an expensive cigar: To hit the ground running from that first minute after lighting up. It must grab you by the short hairs and never let go. So far, we are on the right path.

We have a helluva thunderstorm going on right now. Giant claps of thunder, lightning strikes, gale force winds and a lot of rain. It is 7:30am and it looks like 10:00pm. This scares the bejeezus out of both the dog and cat. I hope we keep our electricity on.

A vegetal element appears…tomatoes, carrots, and celery. Crazy.
And then the “It” factor moves in. Not the sweet spot but, rather, the elusive complexity that brings all the flavors together and creates a carousel of constantly rotating flavors.
It is also the portent of good things to come.
Strength moves to medium body.

The entire four blends that Jeff Pearson sent me were unique in their blends. Not a single similarity amongst them all. They all stood alone…like the cheese.
The same goes for the Perfecto.

My photograph background is right next to the dining room window. The contrast of a blackened outdoors and my lighting set up really show off how oily this wrapper is.
The ash is hanging tough at 1-1/4”.

And then the sweet spot occurs; as it should.
I complained about the sweet spot on the BLTC Morphine 2015 the other day. Took 2/3 of the cigar before it really kicked in.
Expensive cigars need to bring that kick in the pants early in your cigar experience. Otherwise, they are just any $5 cigar.

I now have a strong cheesecake flavor. Chocolate appears for the first time along with caramel.
Plus vanilla salt water taffy.

Downtown Long Beach, CA had the Nu-Pike. A giant amusement park on the water’s edge. It had the biggest, and most dangerous, wooden roller coaster in the world for decades after it was built in the early part of the 20th century.
It was a skeezy place by the time I was 16 in 1966. But they had this little cart that made salt water taffy all the time. I would go down there with buddies to hang about and smoke doobies. We never dared go on the “Cyclone” roller coaster. It had a record of killing an average of 2-3 people every year since its inception.

The Perfecto is gorgeously engrossing.
You know what this blend reminds me of? The Arturo Fuente Don Carlos.

SECOND THIRD:
Smoke time has been 30 minutes.
With each puff, the Perfecto becomes more delicious and complex. Nice balance with a medium length finish. 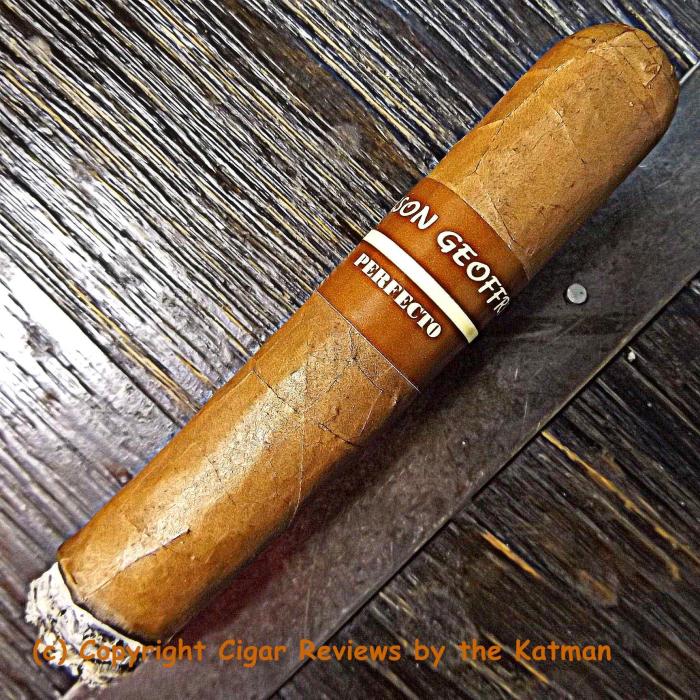 I see the $15.00 in each puff. This blend was a labor of love and passion. Like all the Pierson Geoffreys blends. I am so glad that Sheryl King of Stogie Boys put me together with this company. Every cigar has been a gem.
The strength remains at medium body.

Construction has been on the money from the start. No burn line issues. And no wrapper issues.
This is a perfect blend for newbies and experienced palates alike.
Black pepper returns. It moves to the front of the line. Nice surprise.

The Perfecto now has a very long chewy finish. The smoke coats my teeth and the smoke lolls at the top of my mouth and lingers just long enough for all those flavors to disperse in an orderly fashion.
The blend changes so much that now it is a combination of Don Carlos, Hemingway, La Palina Family Series, and Paul Stulac. That’s quite the feat and explains the price point.

HALFWAY POINT:
I’m truly digging this constant blossoming blend. The Perfecto is a marvel of master blending.
The ash is 1-1/2” long and I’m conflicted about whether to see how long it travels or to tap it off in the ashtray…or my lap.
I gently tap but it stays put. So my lap it shall be.

The thunderstorm is totally gone. Just vanished. The sun has come out. I don’t know about where you live, but here in Milwaukee, July is hot and muggy. Almost like Florida. It is like soup outside.
The complexity is downright intoxicating.

I need to beg Jeff to send me more.
Licorice shows itself for the first time. The vanilla salt water taffy fades. So do the vegetal notes.
Enhanced are the notes of creaminess, spice, coffee, cedar, caramel, milk chocolate, graham cracker, newly added cinnamon, and the earthy tobacco.

The stick is jam packed creating a nice relaxing long smoke. With half an inch to go before we hit the last third, smoke time has been well over an hour.

LAST THIRD:
The Perfecto is super smooth. Like glass.

Jeff Pearson told me the blood, sweat, and tears that went into learning how to blend and then the years it took for him to get exactly what he wanted. It shows.
Passion has a price though. Especially with a boutique cigar. 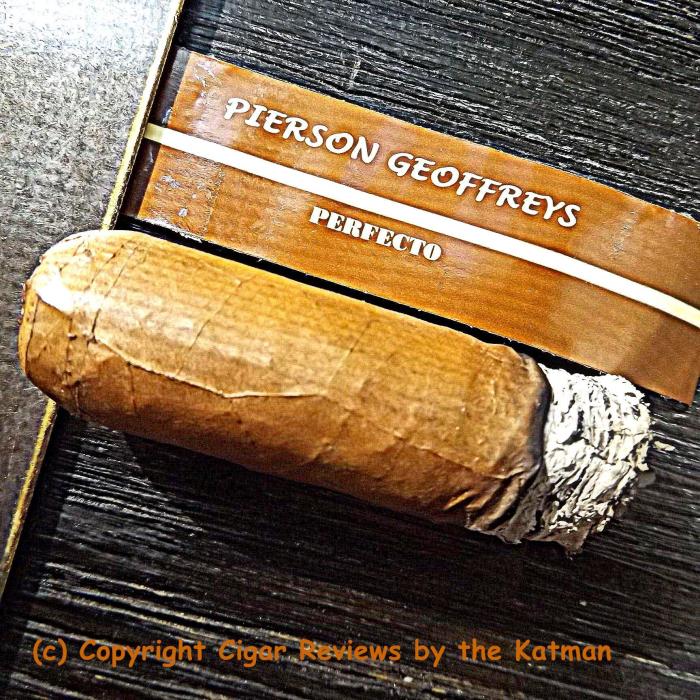 The sweetness has new factors: summer fruit, raisins, and sweet tea.
The strength is just a tick above medium body now.
It drags with it some nicotine. Time to swoon.

Naming a normal round cigar “Perfecto” is a pretty bodacious thing to do. You are telling the smoking public that this is a perfect cigar. I have to admit that it is hitting all my pleasure zones. Perfect is subjective. Damn fine cigar is not.
One thing that has been perfect is the construction. Not a single criticism.

Something new. Peat and nougat. Nicely rounds out the enormous flavor profile.

I am listening to the song “Woodstock” from Crosby, Stills, & Nash on the cable TV radio station. The self-titled album came out in 1969.
Did you know that Stephen Stills recorded the entire album by himself? He played every instrument and did his own harmonies. On a couple songs, the other guys did some harmony but basically is was a Stills solo album. After this album, it was a collaborative effort.

One of the very first concerts I attended had a huge bill of bands. Buffalo Springfield was there and had their first hit with “Nowadays Clancy Can’t Even Sing.”
It was the first loud band I had ever heard. I had to cover my ears from the front row. Things were much more relaxed back then and my buddy Skip and I meandered back stage after the show and spent time with the members: Richie Furay, Stephen Stills, Neil Young, Dewey Martin, Bruce Palmer, Jim Messina, Ken Koblun, and Jim Fielder.

Skip and I paid $3.50 each for those seats. I wanted to see McCartney a couple years ago when he played Milwaukee but seats started at $200 and went up from there. I won’t do it. I’ve never seen him play live but for good seats for Charlotte and I would have cost nearly $800. Fucking greedy bastard.

OK. Enough reminiscing.
The Perfecto is an impressive blend. In my third review of the Pierson Geoffreys cigars, I gave you an order in which I liked the blends. I have to throw that out now. I am totally confused. Every cigar was great and unique.
I was finally diagnosed yesterday and the meds are going to cost a fortune so my cigar budget is no longer viable.
But maybe I can sneak a box of the $9.00 sticks.

With little to go, the flavors flourish. The spiciness now heads the pack. But no harshness or heat. The nicotine is mild and doesn’t require a crash helmet. 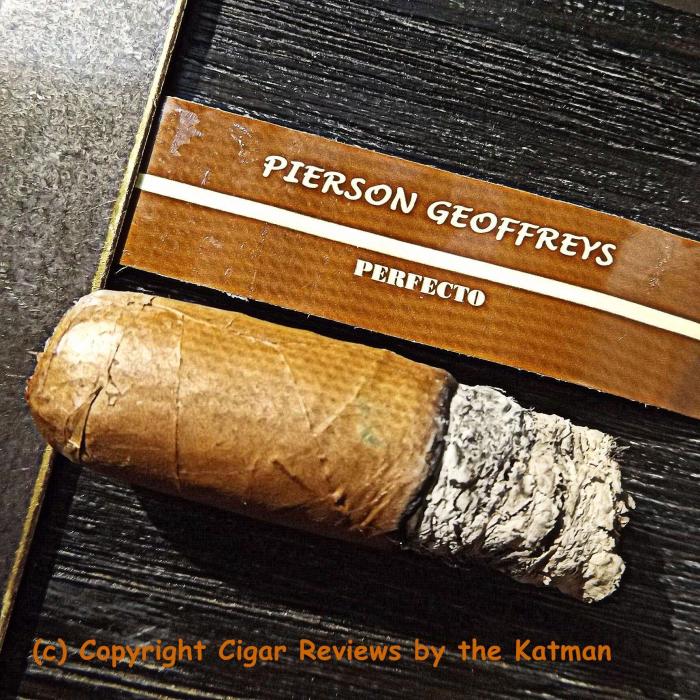 So now I’m done. The only blend I wasn’t sent was the Confianza. It comes in Toro and Belicoso. And prices are $12.50 or $11.50. I think Jeff should send me some for review.
The Perfecto finishes beautifully. I highly recommend this cigar.

PRICE POINT:
A cigar that costs $15.00 has to be special and unique. Every single Pierson Geoffreys cigar blend has attained that. Although some are $9.00 and others for another $6.00 on top of that.
Is it worth $15.00? It certainly has the chops for an expensive boutique blend. If I were flush, I’d definitely go with it. Thankfully, it comes in boxes of 10. But can also be had in 5 packs.

SUMMATION:
You can read my 15 questions for Jeff in the Vintage 1967 review.
The only place you can purchase these cigars online is at the Pierson Geoffreys web site. There are five blends: Vintage 1967, Anejo Havana, Estilo Cubano, Perfecto, and Confianza. Prices range $9.00-$15.00.
This met all the criteria for a fantastic blend.
Flavors were bountiful. A nice combination of complexity, balance, and finish.
The whole line has something going for it. Each cigar is unique. I can’t really allude to what other blends they are like. They pretty much stand alone.
You should visit the Pierson Geoffreys web site and buy something. You have my four reviews to guide you. These blends are too good to be ignored. 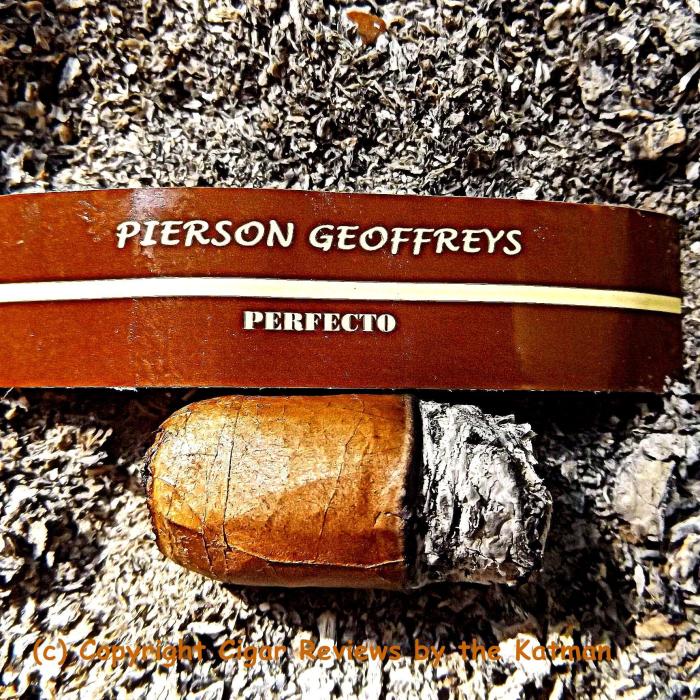