Today we go dumpster diving and take a look at the G.A.R. by George A. Rico.

The only reason I am reviewing this old cigar is I need something to do. My docs say it is important to do what I can to keep my brain active. Unfortunately, my brain stopped being active the day after I took acid for the last time on my 25th birthday. That had to be one of the greatest nights of my life.

BACKGROUND:
From Cigars International:
“G.A.R. is a medium to full-bodied, full-flavored treat from George Rico that captures the bold nuances of his earlier creations, including Gran Habano and the top-rated 3 Siglos. Each cigar is carefully hand-crafted using beautiful Ecuadorian Corojo wrappers and a vintage (but robust) mixture of Nicaraguan long-fillers. Construction is top-notch: the cigar is heavy in the hand and boasts a lovely Spanish box-press finish. The smoke is rich with roasted coffee flavors supported by a creamy core of tasty tobacco flavors. Smooth down to the nub, G.A.R. becomes more intense throughout the burn, becoming quite complex and ultimately satisfying.”

The cigars are made in Honduras.

DESCRIPTION:
Pretty nice looking stick. These cigars have a lot of humidor time as they were a gift from a good friend. So there are little spots of cracked wrapper. I believe these are at least a couple years old. So if they don’t taste like Manna, then Fugeddaboudit.
The box press is sloppy at the transition from the shaft to the cap. The cap may be a triple but I bet it is a double cap.
Seams are clearly visible. Lots of veins. An oily medium brown wrapper that is very smooth to the touch.

FIRST THIRD:
The initial toasting gives off a foul smell. Real barnyard.
But the draw is excellent coming from this well packed cigar.
The floor fan goes on so as not to blind me in my youth.

The first flavors that pop up are pretty interesting: Very rich tobacco, mesquite, creaminess, maple bar doughnut, sweetness from summer fruit, and a heavy dose of black pepper.
So far, so good.
Strength is medium+ body.

There is a slight dried fruit element. But it is covered up by the oncoming citrus in the headlights.

As a kid, I loved to steal sliced potatoes from the kitchen counter when my mother was making French fries for dinner. I still love the flavor of raw potato to this day. But I stopped eating them decades ago. I am getting that raw potato taste in the G.A.R. by George A. Rico.

I believe the 5 pack sent to me has a couple years on it. I’m hoping it hasn’t mellowed out the flavor profile too much.
The flavors have flattened out now. After only ¾” of burn.

Clearly, George has found a niche for himself supplying everyone and his brother inexpensive blends. It is his forte. But he has also developed some outstanding blends like: G.H Reserva #5, G.H. Habano No. 5 Corojo, Barracuda, STK Zulu Zulu (Both blends), and the S.T.K. Miami ZULU ZULU Mas Paz Edition. So George ain’t no slouch. He is a master blender. He just doesn’t spend the time to show that side of himself enough.

1-1/2” in and the cigar does nothing for me.
There is a touch of graham cracker and marmalade. The black pepper is disappearing.

SECOND THIRD:
Little cracks begin to show. But serendipitously, they occur on one side only. So I shall cheat on the photos to make the cigar purty.

Strength has slipped from medium+ to just plain medium body.

The Gran Habano web site is not up to date. It only shows three sizes. Instead of 5. Sometimes, a manufacturer will bow to the demands of a big online store and make some special sizes just for them. I hear CI tries to get a 5.5 x 52 box press out of just about everyone. Here is the example.

The site also says this is a “Full” bodied cigar. So far, the G.A.R. by George A. Rico is in the middle.

Flavors are melting away instead of becoming bolder. I was afraid of this. I don’t know if I should just allow this review to be an exercise for my brain or actually publish it because it doesn’t do Gran Habano any favors.

I got a comment yesterday that cracked me up: “Found you about 6 months ago, love the rock and roll stories, and the cigar reviews aren’t bad either. Hope this finds you well, hang in there.”

And the cigar reviews aren’t bad either. Well, shucks. Thanks brother.

The worm begins to turn. Creaminess appears for the first time.
The balance of flavors remains at a bland status.

“Foxy Lady” by Jimi is playing. You have no idea unless you are my age what it was like in 1967 to hear that song on the radio for the first time. To cop a Hippie quote, “It blew my mind.”
When is the last time you heard a song for the first time and it nearly changed your life?
Music is such shit now. The only good stuff is jazz and the blues. You can take all the rest.
I loved living in Chicago because they had a 24/7 jazz station. I never moved the dial in my car. Milwaukee? A classic rock station, an oldies station, 67 country stations, one metal station, and 10 hip hop stations. Radio airplay tells you all you need to know about a town. I rest my penis. Case closed.

C’mon G.A.R. by George A. Rico! Do something! Impress the shit out of me. Don’t just lie there like my first wife on our honeymoon! Screwed like a bunny rabbit before we got married and then closed the magic rose petal when we got married. Then spend 10 months in an institution and one month after that, we divorced. Lovely marriage.

HALFWAY POINT:
The bloody sun comes out. Huzzah!
You can see how pretty and oily this wrapper is. 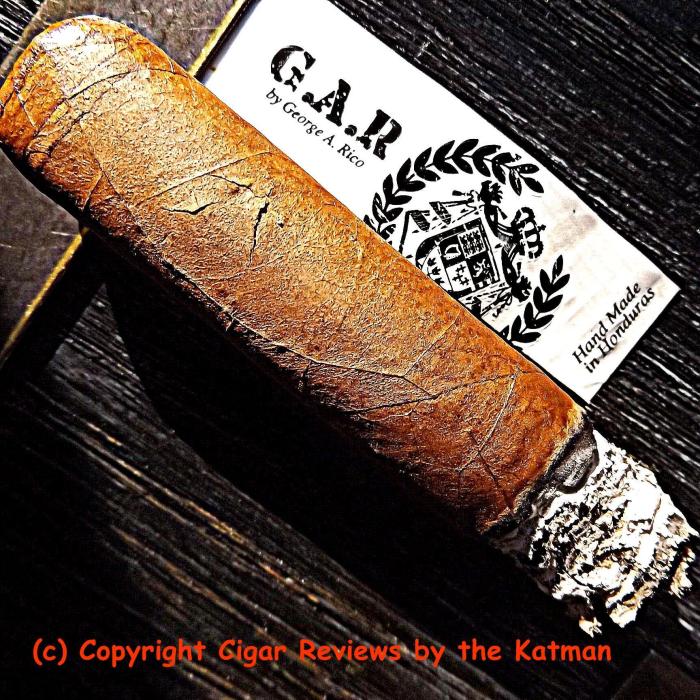 Except for the few wrapper cracks, the construction has been first rate. Not a single touch up required of the char line.
Halle-fucking-leujah! The Bold and the Beautiful make a smooth moon landing. Now we have something going. It took half a cigar to get here, but gets here it does.

Side Note: I have a new sponsor: Pierson Geoffreys Cigars. I reviewed four of the blends. Each one is killer. And I only accepted the ad space because I believe in this small boutique brand. They aren’t cheap. Two blends are $9 each and the other two are $15 each.

You have to try the Estilo Cubano. Read my review. I smoked one four weeks after receipt and it was unbelievable. Jeff Pearson has done a bang up job of creating four completely different blends.
If you go this post, “New Sponsor: Pierson Geoffreys Cigars – Get 10% Off,” it will list my reviews of the four blends.

He is offering 10% off to my readers. You can see the ad at the bottom of the page. Click on it and it takes you to his web site.
Get a 5 pack. After the discount, its price point is $40.50. Let them rest for a month and be ready for the shock waves. I believe in this company. I hope I can help grow it. It deserves to be smoked by the most elite palate.

Back to the G.A.R. by George A. Rico.
Totally great now. About time. A sea of swarming simbas.
It’s a good thing I don’t rate cigars. Any cigar that makes you wait to the second half to kick in would never get a good score from me. 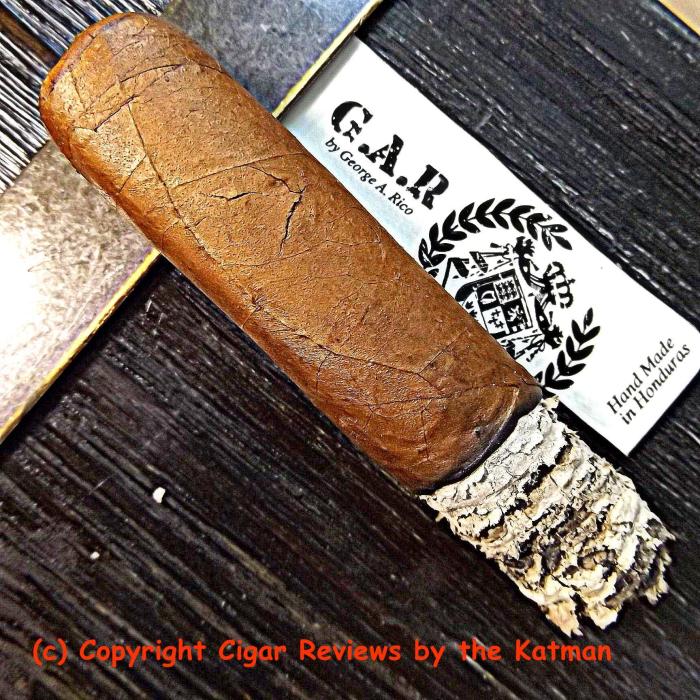 You can probably get these cigars for around $3 on Cbid.

The only thing missing is cocoa and coffee. The Nic filler isn’t strong enough to overcome the influence of the Ecuadorian Corojo wrapper and binder. I found a couple reviews and they all got the leaf stats wrong. How hard is it to go to the manufacturer’s web site and get the info straight from the horse’s mouth?

Smoke time has been over an hour.

Doobie Brothers are playing. Met the bassist, Tiran Porter at a nice club in San Jose, CA. He sat at the table with us between sets and he complained til the cows came home about Michael McDonald. “What an asshole. He took over the band completely and was forced upon us by management.”
So my buddy and I sat for all four sets and each break, Tiran sat with us and told us all the dirt he could get off in 25 minutes.
After McDonald went solo, the band went back to their roots and is a much better band for it.

Where was I?
Oh yeah. Reviewing the G.A.R. by George A. Rico.

I find it easier now to add little snippets of rock info inside the review instead of after the review. I’ve written hundreds of personal rock n roll stories. So these little snippets are easier on my puny brain..and getting smaller.
Strength hits a solid medium/full body.

While flavors are fun, this is not a complex cigar. The balance is good and it has a nice long finish now.
I imagine smoking one of these G.A.R. by George A. Rico’s only a month or two after receipt will be a disaster. You buy these and wait a year.

LAST THIRD:
The last half is everything for this cigar blend.
And the last third is swingin’.
Nougat, caramel, maple, toasty, and nutty.
Unfortunately, too little too late.

But the G.A.R. by George A. Rico is very smooth. Full bodied now and no hint of nicotine.
The char line is on the money.

I like that no matter how long I let the cigar sit in the ashtray, it doesn’t go out. If Rico had spent as much time on the flavor profile as he did on the construction, this would be a fine cigar.
And then the cigar goes out. WTF?

Thank God I don’t have the Sephardic Jew big nose. Instead, I have the Ashkenazi nose. Or Roman nose. I’m half German and half Hungarian. A big shnoz gets in the way of the lighter’s torch.

PRICE POINT:
I certainly wouldn’t pay the $7 retail. But CI and the Conglomerate sell them for $5.75.
Based on the fact that these sticks have had more than their share of humidor time, I am not impressed with the total cigar experience. $3.00 on Cbid is about right.

SUMMATION:
Generally speaking, construction is good. The char line was dead nuts the entire time.
But the G.A.R. by George A. Rico is not a premium cigar. It is a good looking yard ‘gar.

If the flavors I tasted in the last half started the whole thing off, I would have a different opinion.

This is why I don’t like to review inexpensive cigars. For the most part, they are lacking in everything I like in a cigar.
But I don’t have any decent cigars to review. I won some decent cigars on Cbid but I won’t pay for them until Tuesday and then they need some rest. I won the La Sirena Oceano Atlantic Super Belicoso, Kristoff Brittania Reserva Churchill, and Gurkha Hudson Bay Robusto. I will have to wait to bid on more cigars until after my social security rolls in.

So I’m conflicted about reviewing older cigars that just may be yard ‘gars.
Anyway, I don’t recommend this cigar unless you are looking for what it is. A cheap cigar to knock around with or give to your moocher friends.