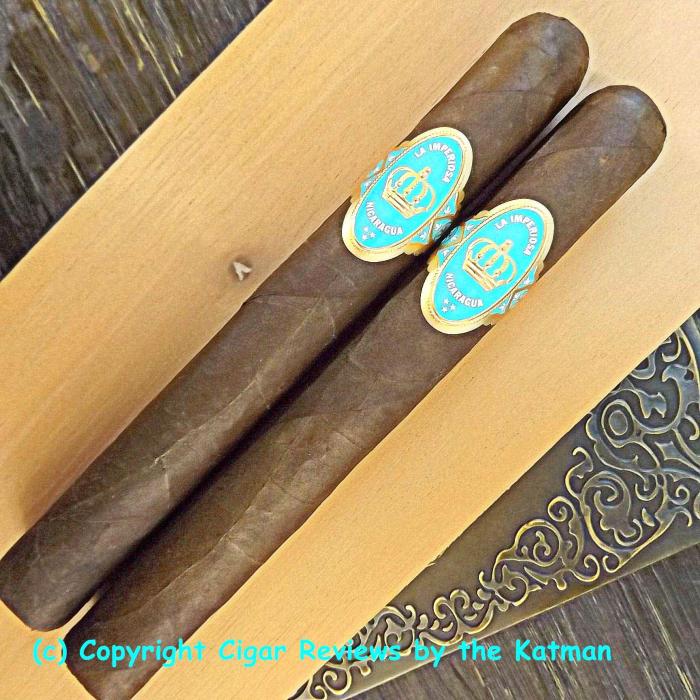 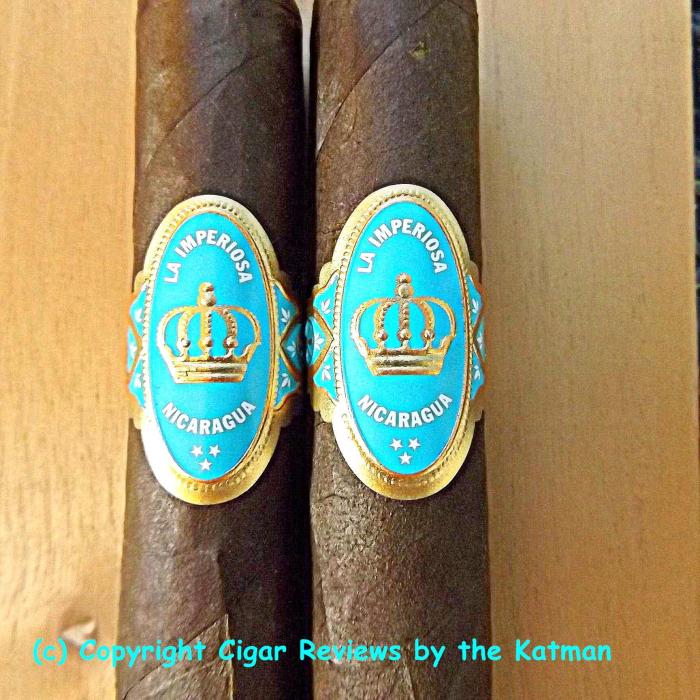 Today we take a look at the new La Imperiosa by Crowned Heads.

“Originally a Cuban brand from the early 1900’s, La Imperiosa translates to ‘the imperative,’ or, “..that which is absolutely necessary or required.” The La Imperiosa artwork and band were inspired by the original Cuban vista and band of years gone by.

“The blend of 100% Nicaraguan binder and filler tobaccos, finished with a dark and imposing Ecuador Habano Oscuro wrapper, is identical to the Las Calaveras EL 2014 blend. Released in May 2014, the Las Calaveras EL 2014 brand went on to become one of the year’s most sought-after new releases, and was praised by cigar enthusiasts around the world. Despite selling-out in a matter of weeks, the demand for Las Calaveras EL 2014 remained high and constant. As a result, it became ‘imperative‘ and ‘absolutely necessary‘ to respond to that demand.

“TASTING NOTES: Opens big with a burst of red pepper, before easing off the throttle and settling onto the palate with dense and multi-layered notes of dark fruit, earth, and charred meat. The flavor is at once dense and approachable, with a massively-brooding muscular structure. This is a tour de force of Nicaragua’s finest tobaccos at their hedonistic best.”
Crowned Heads deferred to Halfwheel.com for information on this blend:

“….La Imperiosa and it’s the same blend as last year’s Las Calaveras, arguably the company’s most sought after line to date. Unfortunately for Crowned Heads fans, Las Calaveras is the company’s annual regular production and the cigars went quickly, particularly in the robusto vitola.

“ “It will launch at next month’s IPCPR Convention & Trade Show in New Orleans. It’s the second regular production Crowned Heads brand to be produced at My Father Cigars S.A. following the release of Jericho Hill last year.”

DESCRIPTION:
As we all know, size matters. And since the sizes are different than the Las Calaveras sizes, there might be a whole different flavor profile.
I reviewed the Las Calaveras Edición Limitada 2014 LCC550 back in June of 2014. That is the 5 x 50 Robusto. Prices have not changed from last year for comparable sizes.

Big solid stick. Like me. Nearly invisible seams. Lots of spider veins. The triple cap is not close to being what I expect..but there you go. The wrapper is a semi-oily dark chocolate brown.
The cigar band is one of those that is a bitch to photograph. Enough light to show off the wrapper and the gold lettering and trim atop a pale blue background washes out. Not enough light so that the band’s details can be shown and the stick washes out. Go figure.

SIZES AND PRICING:
See “Background” for pricing and size information.

FIRST THIRD:
The draw is terrific as this log dangles from my lips…teetering. 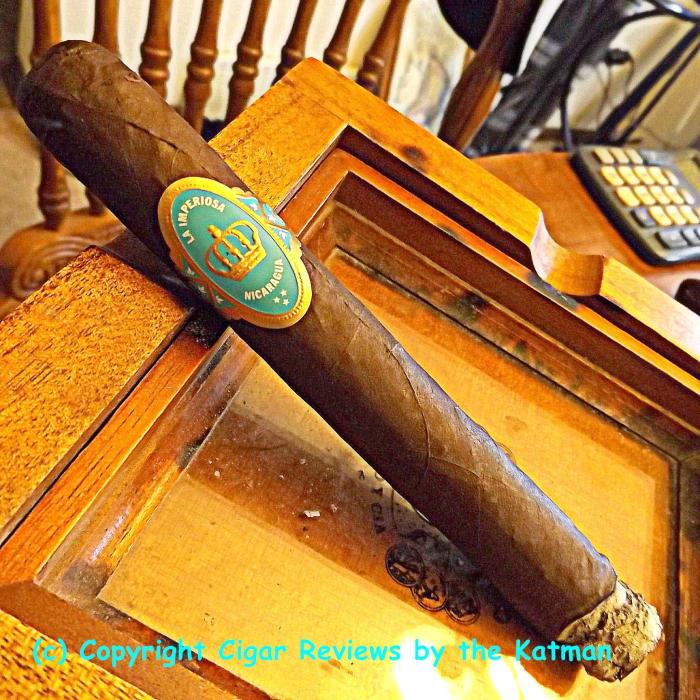 Even though I could cheat and read my Las Calaveras review if the leaf stats are the same. Should taste the same? Maybe? I didn’t read it and will take my chances and put my balls on the chopping block.

This baby is a smoker. The photos would be great if only it cooperated. Nope. By the time I suck the hell out of it, put it carefully in the ashtray, bring the camera up and take a shot, it’s gone. Drat.
Strength is a strong medium body.

The lovely fruitiness gets stronger and stronger with each passing minute. The chocolate gives it a chocolate covered cherry confection flavor.

While in lovely downtown Milwaukee to see a doc, Charlotte and I went over to the big roofed open market. I found a chocolate stand that carried sugar free stuff. Only $26 per pound. So I bought half a pound in a box of 12 candies. In it, were two chocolate covered cherries. I could barely hide my excitement. No one makes these without sugar. Believe me. I’ve looked.
So once at home, I took one out and let it melt in mouth, savoring every nano second. Damn that was as good as sex. Maybe not as good as a terrific blow job, but really, really good.

The La Imperiosa by Crowned Heads is a very good cigar but after yesterday’s Black Powder by Outlaw Cigar Company, it pales in comparison. Yet both are in the same price range.

I absolutely loved the Las Calaveras but this is different. I will have to check the Calaveras review from a year ago to see how close I came. But I really do think that each size in any blend will give the cigar a tweak on its flavor profile. I’m smoking a Toro not a robusto. This is basically a 6 x 50 Toro. But Crowned Heads chose to call it a Double Robusto. I don’t get it. Someone should canonize the sizes and names, have it signed off on and let’s get on with our lives.

The meandering point I’m trying to make is that the Toro is not as intense as a robusto. Certain subtleties may be missed or not there at all.
The char line has been a bit wonky up til now. But the worm has turned and it’s dead nuts. 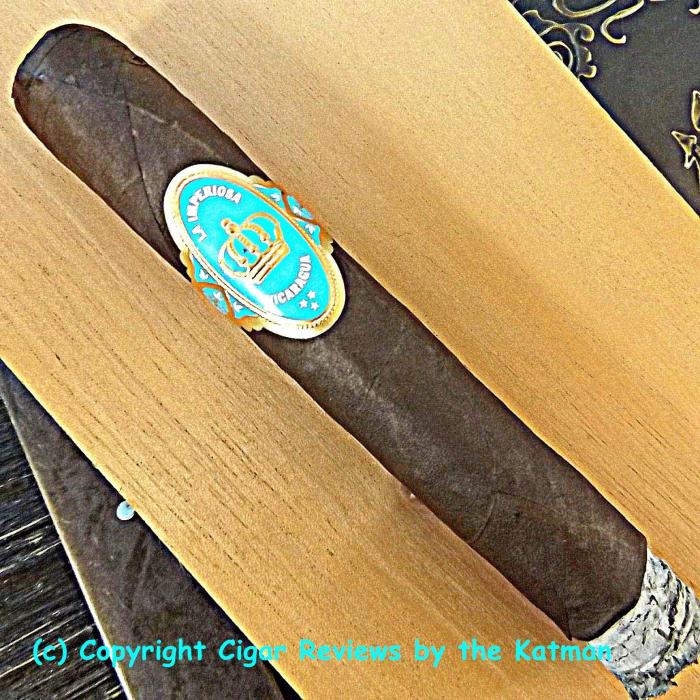 It is the malt that seems to complete a flavor profile for me. And it wasn’t until yesterday, when I did my research that I came to understand about the types of influence varied malts have on the flavor of a cigar.

I will repeat it:
“There are dozens of types of malt. Here are a few: Base Malt, Dark Malt, Light Malt, Caramel Malt, Roasted Malt, and Dry Roasted Malt.

“This variation on a theme is what I’ve tasted but couldn’t identify. The closest thing we come to taste malt is in a chocolate malt milk shake, malted milk balls or your favorite beer.

“Think about it the next time you light up a great cigar and tell me I’m wrong.”

The La Imperiosa by Crowned Heads is influenced by dry roasted malt and caramel malt.
Damn. The cigar goes out.
The web site describes “charred meat.” I’m having trouble with that one. Yes, I can taste a steak-like quality. But charred? Not yet for me.

Back to the La Imperiosa by Crowned Heads.
Absolutely wonderful. Now I’ve built up the Las Calaveras in my head to maybe being better than it actually was. The mind fuck.
I don’t think that the La Imperiosa by Crowned Heads is as good. Don’t get me wrong. I think it is an excellent cigar. But you sir, are no Las Calaveras..or is that Jack Kennedy?

Ahh…bliss. The radio is playing Jimi’s “All Along the Watchtower.” My favorite Hendrix tune.

Just as I write those words, Sweet spot 2.0 hits.
Now I could have gone back and deleted my comment but I like it when you get to see what a schmuck I am.

HALFWAY POINT:
Smoke time is 48 minutes.
I get a new flavor: orange zest. Bond…James Bond. The “Vesper” (Not Vespa) is made of gin, vodka, and Kina Lillet. That is what I taste. 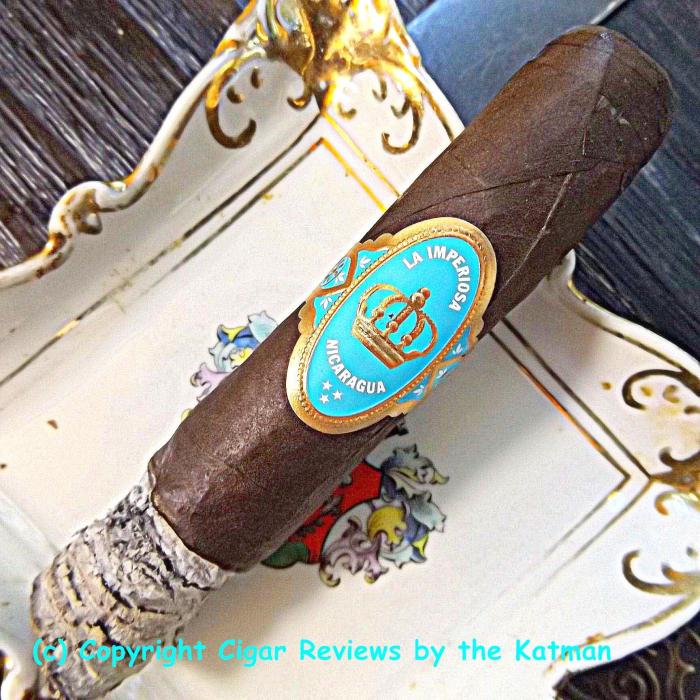 Here is what Kina Lillet is:
“Lillet is a French aperitif wine from Podensac, a small village south of Bordeaux. It is a blend of 85% Bordeaux region wines (Semillon for the Blanc and for the Rosé, Merlot for the Rouge) and 15% macerated liqueurs handcrafted on site, mostly citrus liqueurs (peels of sweet oranges from Spain and Morocco and peels of bitter green oranges from Haiti) and Quinine liqueur made of Cinchona bark from Peru.”

A perfect description of the flavor. I didn’t read that in Crowned Head’s description.
The La Imperiosa by Crowned Heads is a great cigar but I don’t remember the Las Calaveras tasting like this. Any number of elements in the processing of the tobacco could have changed. From age to fermentation.
Alas, the spiciness is gone.
But strength hits medium/full.

Bob Seger is playing. Never got his popularity. Can’t stand his voice. A poor imitation of Greg Allman.

The La Imperiosa by Crowned Heads is a dazzling blend. Full of wonderful flavors. So complex and balanced. Nice long, chewy finish. Love it.
I’m 50/50 on Crowned Heads. They have made some very good cigars. But then they have made some mediocre cigars. I guess they are stretching their legs. I liked the Jericho Hill, Four Kicks, and of course the Las Calaveras….I guess that’s it.
The La Imperiosa by Crowned Heads is a quantum leap for Jon Huber and company.
Or just déjà vu.

The sun has come out and you can see in the following photo the oiliness of what I thought was more of a matte finish. And the small sandy toothiness becomes apparent. 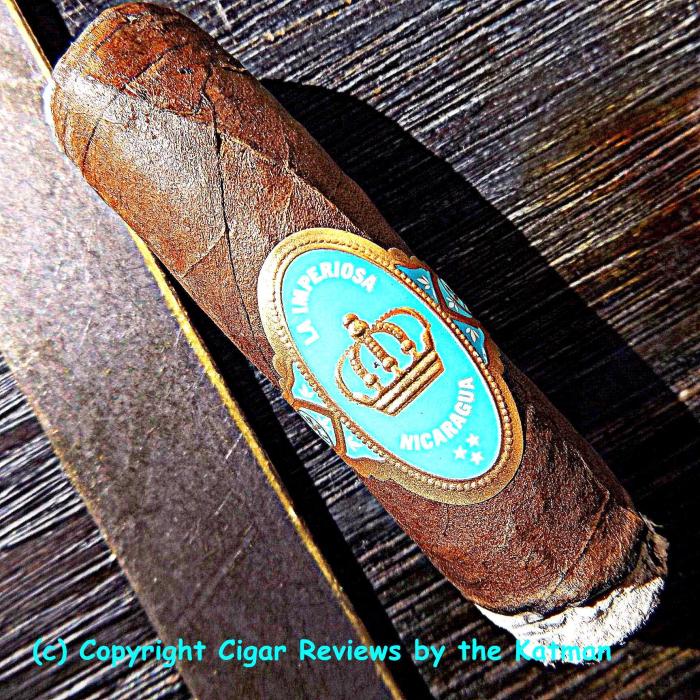 The caramel malt is screaming laughter. It is making the whole blend.
The La Imperiosa by Crowned Heads had an unimpressive start but once it hit its stride in the second half, it is a gorgeous blend.

Now I’m glad I got the Double Robusto instead of a smaller size. Of course, you can argue that in a smaller size the flavor explosion might have started earlier. But I’ve spent my wad and this is it for your Uncle Katman. 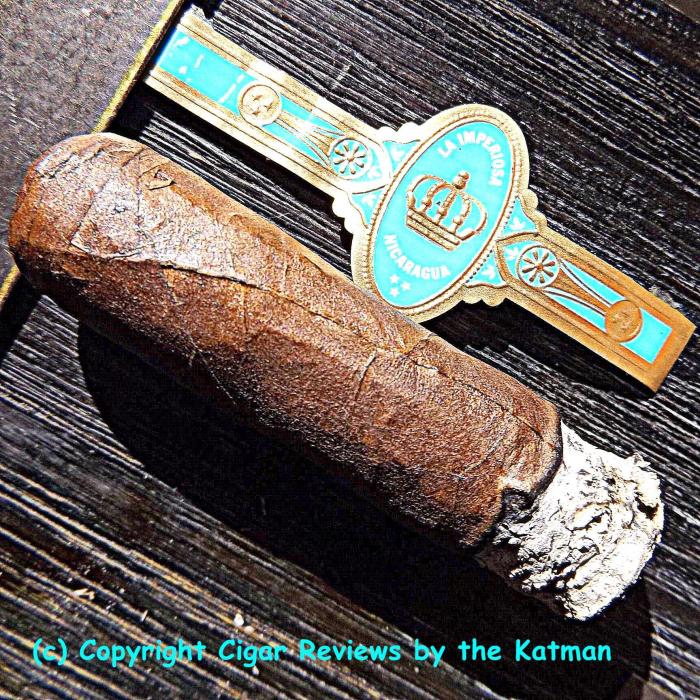 I have good days and bad days. Today is the latter. I have tremors something awful. Tough to type. I want to crawl into a hole.

I take a sneak peek at my Las Calaveras review and it is very similar to this blend..which is the same. So while it is similar, the La Imperiosa by Crowned Heads stands on its own.

This is a good cigar.
OK. Here goes. I rate the La Imperiosa by Crowned Heads a 91.
It’s better than the rest of their blends. You may argue with me but that’s OK.

In the last 1-1/4″, nicotine comes washing in. I’m not feeling well enough to finish it.

Construction has been good but it has needed a lot of minor touch ups. It also went out on me twice. I might have scored it higher if not for those issues.

PRICE POINT:
Thank goodness the boys at Crowned Heads aren’t greedy. It made it successfully through IPCPR and came out the other end wallet friendly.
While I can’t remember if this is a limited run..which I suppose it is…the price is spot on. They didn’t raise the prices from last year. Nice.

The La Imperiosa by Crowned Heads is worth every nickel of the $9.00. Yet I found this cigar available everywhere online. That usually doesn’t happen with a limited run. Go figure. Prices are not controlled so do your smart shopping.
Cigar Federation and Small Batch Cigar give you that 10% discount. I saw that Atlantic is selling them for that same discounted price but they are backordered on just about every size.

SUMMATION:
I thoroughly enjoyed the La Imperiosa by Crowned Heads.
It had wonderful complexity. Nice balance. And a mile long finish.
I believe that this is a better blend (Yes. I know it’s the same) than the Las Calaveras. In reality, it cannot be the exact blend. Unless they saved all the tobacco from the Las Calaveras. But even then it would have aged another year.
Weather changes. The same people producing it in the factory? No information on its aging.
Regardless, the blend is one you must try. Especially if it is a limited run. 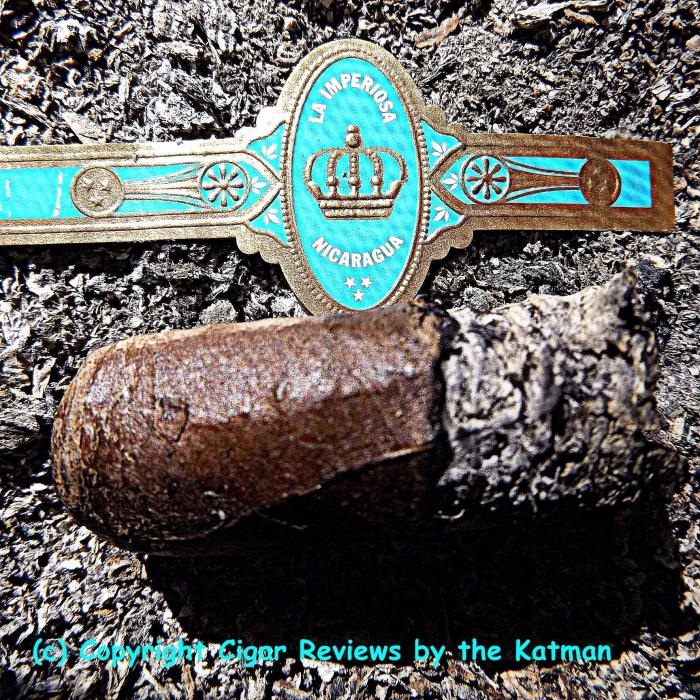