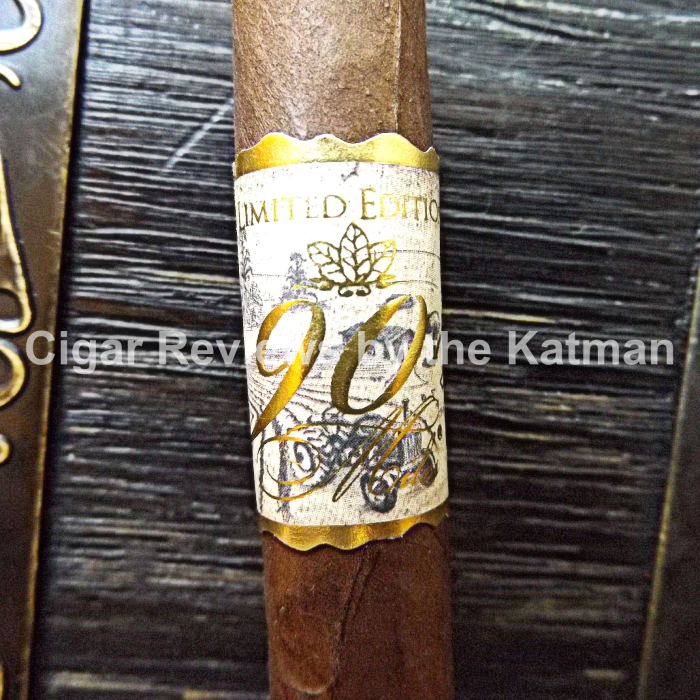 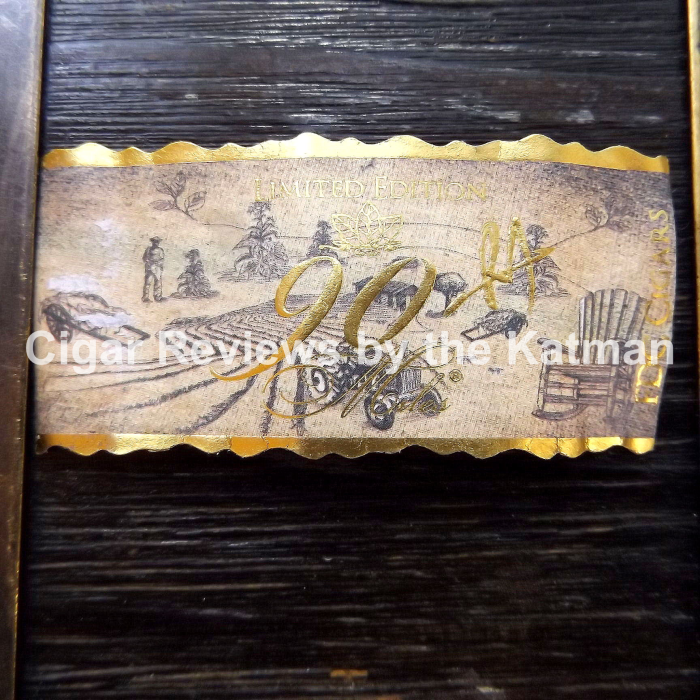 Today we take a look at the 90 Miles R.A. Nicaragua Lancero.
As usual, I’m a dollar and a day short as this cigar was released a year ago.
I just finished reviewing the Cuban Cohiba Siglo II. It was a small cigar and didn’t take much time. I’m still rarin’ to go so I had some cereal to cleanse my palate and here we go.
And I must apologize for my photos. Tremors on top of a difficult cigar band to photograph.

From Halfwheel.com web site:
“Roberto Alonso, the company’s former director of sales and marketing, is credited as the creator of the line’s name which refers to the distance between the U.S. and Cuba. Having passed away last year, the company wanted to pay tribute to him with this limited edition lancero. It was Alonso’s favorite size, and in addition the company used a sketch he had done on a napkin on a trip to Nicaragua in 2011 as inspiration for the cigar’s box and band artwork.”

DESCRIPTION:
Long Tall Sally.
An oily, dark coffee bean wrapper. Seamless. Lots of veins. A perfect triple cap with a tiny pig tail atop it. Very smooth to the touch. Even close up, the cigar band is nearly impossible to read. Light gold lettering on top of a gold background. It does have some sort of mural on it. Will see it in better detail later.

FIRST THIRD:
The draw is a bit tight. I find that a lot on Lanceros.
The first flavors are Indian spice, spiciness, sweetness, very earthy tobacco notes, toasted nuts, and black raisins.
The spice quickly ramps up.

The char line is spot on still using my new method of lighting the wrapper perimeter instead of torching the bottom of the foot.
Strength is immediately medium body.
A wood note appears.

The sweetness is made up of several components. A sugar cane element. (I got tired of reading this flavor in other reviews so I went to the market and bought a small stalk of sugar cane.) Now I know. Other sweet components are vanilla salt water taffy and shortbread cookies.

The spice disappears as quickly as it appeared. Now it is at the back of the line.
I’ve reviewed the “90 Miles 1980 by Flor de Gonzalez” and the “90 Miles Reserva Selecta.” Both very good cigars.
The 90 Miles R.A. Nicaragua Lancero has no complexity yet making it an uninteresting mish mosh of flavors.

SECOND THIRD:
Smoke time is 15 minutes.
Like a light switch being turned on, the flavors explode. The char line is not behaving. Nothing terrible. But I’ve found that I’ve always had trouble with Lanceros on this issue.
The 90 Miles R.A. Nicaragua Lancero is now very complex with a nice balance and a long finish.

I won’t win any awards for saying this; The Flor de Gonzalez line of cigars isn’t for the experienced smoker. The price range, which is mostly in the $5-$7 range. And even cheaper on Cbid by a buck or two per stick.

I’ve become a cigar snob over the years having the opportunity to smoke some really high premiums regardless of price.
And this whole line is directed at the smoker who doesn’t really expect much from their cigar. Because 90 Miles doesn’t deliver much. They are just OK cigars. Good for handing out to your mooch friends. For the price, you can do so much better. Check “The Katman’s List of 148 Great Cigars in the $5.00-$6.50 Range.”

HALFWAY POINT:
Smoke time is 25 minutes.
The burn line is a mess and needs another touch up.
The 90 Miles R.A. Nicaragua Lancero has lost a lot of its flavor. It is no longer complex. The finish is short. What happened?

I’m not doing any good for sales of Flor de Gonzalez blends.
I quickly check a couple review sites and the feeling appears to be the same as mine as I look at the dwindling ratings.
Some bitterness appears. Drat.

Under different circumstances, I would have put this cigar down and moved on to a cigar I know has better characteristics.
But hopefully, the last third perks up.

I don’t care for getting my expectations higher than the reality of the experience. It’s a big letdown. As it turns out, the two cigars I reviewed from 2013 and 2014 were much better. Instead of each new release getting better, they are going the other way.
I mean no respect to Yadi Gonzalez.

LAST THIRD:
Smoke time is 40 minutes.
Finally. The blend does perk up and all those wonderful flavors return. Even the spiciness is strong once again. So the halfway point in the cigar was a dud.

A nice leathery element appears for the first time. And a delicious wood component surges. The spice is so strong it burns my lips.
The chocolate, creaminess, sweetness, dried fruit, and vanilla are leading the pack.

I still have a couple blends left from the sampler box that Yadi sent me but I’ve decided not to review them. I’ve not had any luck with the blends I reviewed and I don’t like writing negative reviews. I’ve got other brands I’m looking forward to reviewing.

It is literally night and day compared to the previously reviewed Cuban Cohiba Siglo II. I now think reviewing this second cigar in a row was a bad idea. Or at least the choice of the second cigar.
The last third is where the money is. But too little, too late.
I’m very bored. This is anything but an interesting cigar blend.
Time to put it down and move on with my day.

PRICE POINT:
Compared to so many other cigars, $7.50 is actually a little steep. This cigar belongs more in the $5 range. And I do know that Lanceros always cost more. But good quality usually accompanies that size.

SUMMATION:
This is just an ordinary cigar. The 90 Miles R.A. Nicaragua Lancero is nothing special.
I’ll probably get a bill from Flor de Gonzalez for the sampler pack.
This is not a cigar I would want to keep stocked in my humidor. In all honesty, I’d give it away if I had the chance.