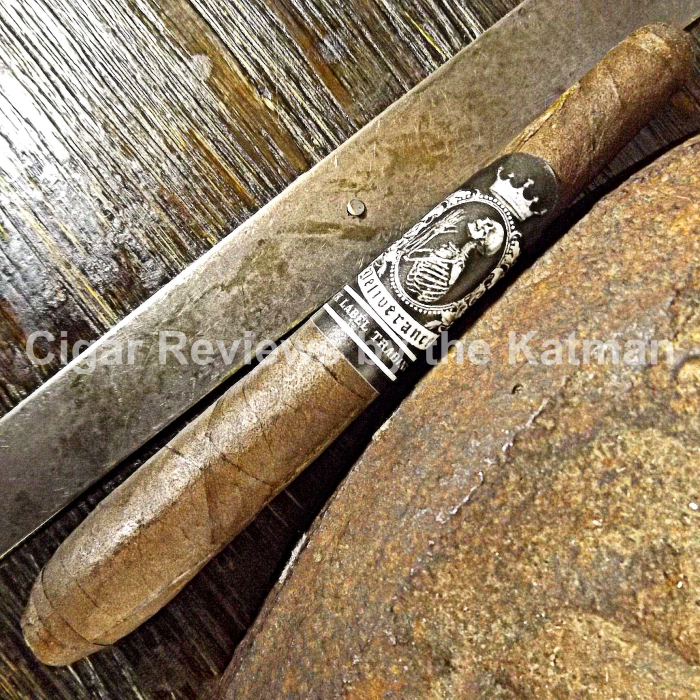 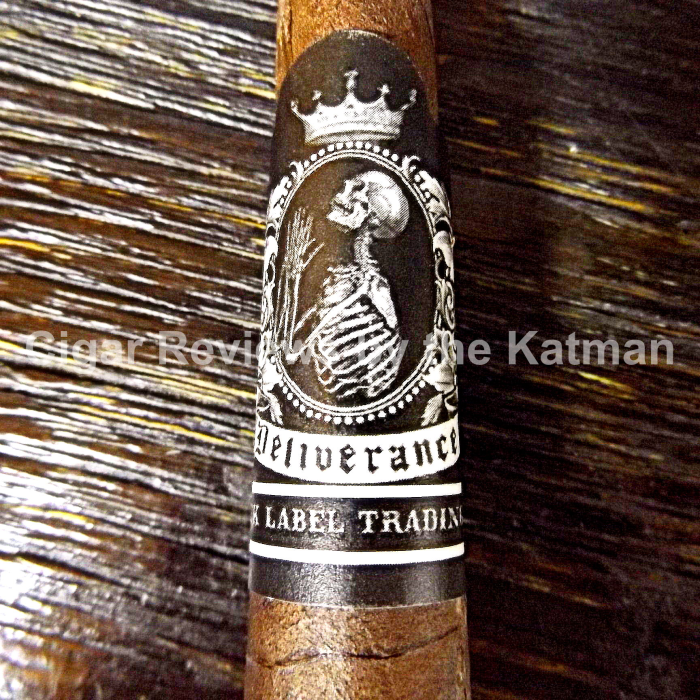 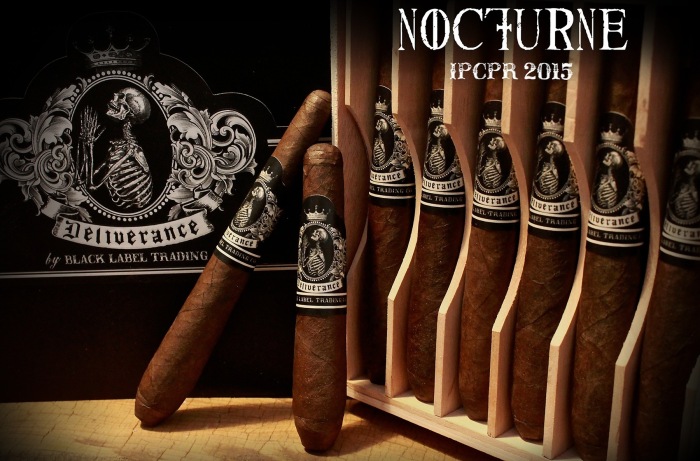 BACKGROUND:
Factory: Fabrica Oveja Negra in Estelí, Nicaragua.
The BLTC DELIVERANCE NOCTURNE made its debut at the 2015 IPCPR trade show.

“Deliverance Nocturne will be an addition to the Deliverance line, made throughout the year in small batches with additional vitolas being added.

“Nocturne is a very special cigar. Everything about this line is different for us. The vitolas, the blend style and the wrapper are things we have never done before. I have been working with Pennsylvania tobacco for a while and love its strength and richness. The Pennsylvania tobacco really elevates this cigar to the next level. I wanted something totally different for the vitolas, so we created our own, a slender Salomon with a blunt foot, or what we call a “Snub Nose”. This makes Nocturne a very time consuming cigar to make but these vitolas work perfectly with the blend,” said James Brown, creator of BLTC.”

DESCRIPTION:
This is an odd looking duck. It appears to be a normal Salomon at the foot. But then it tapers all the way down to a 36 ring gauge at the cap. It looks like a fancy hammer handle:

The wrapper is extremely rustic. It is an oily, mottled, dark coffee bean brown. Tight seams. But some huge tree trunk veins.
The cap is a quadruple cap and done very nicely.

The stick is super solid with no give. Hope I don’t have draw issues because getting an awl down the center will be a bitch. I’m sure to crack the wrapper.
There is a huge trend to use skulls and skeletons in the artwork of cigar bands the last year or two. The devil made them do it? Dunno.

I have a prediction. Salomons are well known to have burn issues. I read a review and the reviewer complained about just that problem with this cigar.
And lastly, this is my one and only sample. So here goes nuttin’ honey.

AROMAS AND COLD DRAW NOTES:
From the shaft, I smell dark cocoa, some nice floral notes, a sweet fruity element, and dried figs.
From the clipped cap and open foot, I smell the exact same things as I enjoyed from the shaft.
The cold draw presents flavors of chocolate, spice, sweetness, fruitiness, and dried figs.

FIRST THIRD:
The BLTC Deliverance Nocturne Snub Nose starts off with a very tight draw. I massage it a bit to help loosen things up. I don’t want to use the awl.

First flavors are chocolate, fruity sweetness, spice, herbal notes, big malt flavors, and a rich, earthy tobacco flavor.
It’s a little like solving a trig problem with the heavy part of the cigar dangling the furthest distance from my mouth. The trig is trying to keep the small part firmly ensconced in my mouth without dropping the cigar.

This is how a $12.00 stick should start. Off to the races with the starting gun ringing in your ears.
The fruity sweetness becomes raisins, fresh figs (not dried), and black grapes.
Caramel moves into the middle of the pack.

I have to use the awl. There is a plug between the cigar band and the cap. Once complete, the draw is spot on.
As predicted, the char line ain’t doing so hot. A touch up is required to prevent the cigar from canoeing.
Strength is medium/full.

Big change up in flavors only about an inch in: Creaminess, spice, honeysuckle, sweetness, raisins, earthy tobacco notes, charred oak, cocoa, and that big boat load of malts. I’m surprised that the bold cocoa has moved to the back of the line.
There is a black tea element that arrives and is welcomed to the party.
After the touch up, the burn line is now dead nuts perfect.

I gotta be honest here. I’m not a fan of BLTC cigars. I’ve reviewed a few of them. And found them lacking in character. I know I will probably be stoned (stoned the bad way, not the good way) for saying this as there are so many BLTC fans. But it is how I feel. Just like the way you disagree with my own fan base of blenders. Like eyes, no one palate is the same.
OK. Back to the BLTC Deliverance Nocturne Snub Nose.

The sweetness is very strong now. Spice is on the wane. This is a very slow roll of a smoke. But then I am smoking the 56 ring gauge part of the cigar. So each third will have a totally different smoke time from the previous third.

The BLTC Deliverance Nocturne Snub Nose is such a dark cigar that it melts into the background of my usual places for taking photos. So, it looks nice on that fire engine red My Father ashtray. LOL.
Ahh…Complexity kicks in. So does the balance and the long finish. Now we’re talkin’. 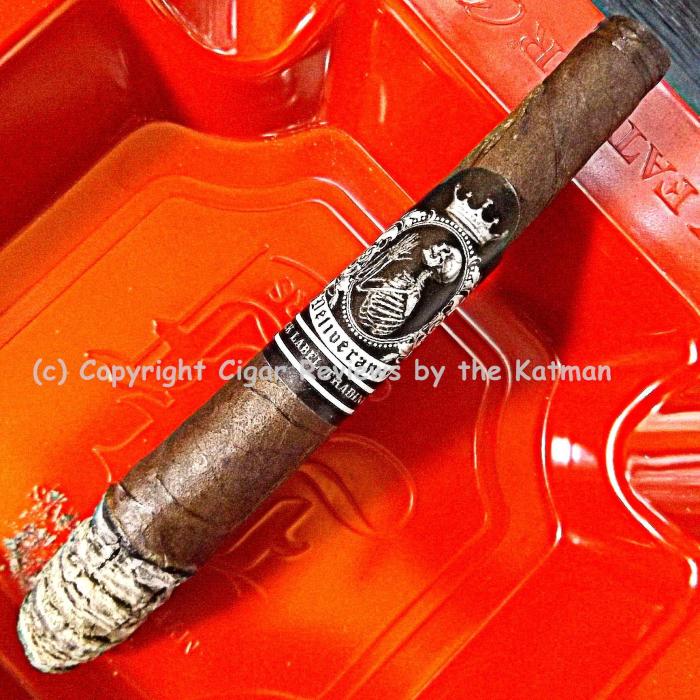 The BLTC Deliverance Nocturne Snub Nose is inching towards full body.
I’ve only smoked 1-1/4” and its taken 25 minutes to do so. Methinks this will be a 2 hour cigar.

The char line remains perfect without help from me. Now that’s journeyman construction on a very difficult cigar size to roll.
The malts are kicking ass. For this blend, the malts are most definitely the “It” factor.
A new malt enters: Pale Ale Malt (“Base malt with slightly darker color. Provides fermentable sugars, light malt color flavor and aroma.”)

SECOND THIRD:
Smoke time is 45 minutes.
The draw becomes tight again. Out comes the cigar awl. Must be a self-healing cigar. 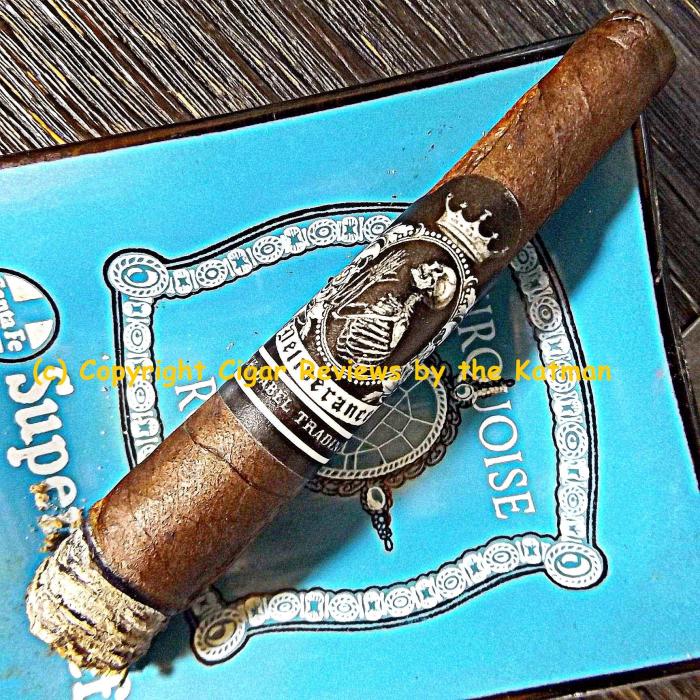 The draw is perfect now. I don’t know what I did before I discovered the simple method of screwing in an ice pick. That’s what it is after all. Although, I have another awl that has a wood screw end that is about 3” long and the rest is smooth. That works just as well. But I keep it downstairs in the cave and the other one at my work station here.

Strength is now full bodied. Very complex. Beautiful balance. Long, chewy finish.
The spice has decided to do a coup d’état. It takes first place in the flavor profile list.
The BLTC Deliverance Nocturne Snub Nose just keeps getting better with each puff.
The chocolate and creaminess are soaring like eagles; or vultures depending on your state of mind.

The honey suckle and caramel work together perfectly. The malts are going nuts…so to speak. There is a nuttiness.
Marzipan. Damn I like marzipan. So hard to find sugar free marzipan.

But wait…ooh, ooh…Buddy Squirrel sells a pound of sugar free chocolate in a box with about 10 different types of chocolates; both milk and dark chocolate. They sell that box for $32. In Charlotte’s first week, she bought me a box with her discount which ended up being $19.00. I went nuts the first day and ate 5 or 6 chocolates. I’ve been trying to parse them out daily so I don’t go through them all but they are so wonderful. Certainly not the lousy quality of Russel Stover. Blech.

Back to business and the BLTC Deliverance Nocturne Snub Nose.
Creaminess and spiciness are neck and neck.

The cigar is now super full bodied. Lots of nicotine. Not a blend for newbies. And I have a lot of cigar to go.
I’m extremely impressed with the BLTC Deliverance Nocturne Snub Nose. This is a high premium in all aspects of that definition.

I love how slow it smokes. Unlike yesterday’s review of the Kristoff Galerones Series Brazilian Habano which burned like a cigarette.
I’ve been lucky by not having huge chunks of ash fall on top of my lap and burning my naughty bits.
The complexity is super heavy duty. What a fantastic blend!
The black tea disappeared a while back. Too bad.
The draw remains perfect.
I feel like a pig wallowing in its sty. Do pigs smile? This pig does.
I would love to smoke the smaller Short Salomon “Snub Nose”.

Before I move on, I want to stop programming already in progress.
I received samples from Cabreras Cigars out of Pasadena, Texas. I got five blends: Cabreras Black (Maduro), Cabreras Connecticut, Cabreras Sumatra, B & J Reserva Especial Habana, and B & J Reserva Especial Maduro. You can visit their store at Littlecigarbox.com. I believe they have 8 in house blends as well as a full outlay of regular brands.
I tried a few of the blends ROTT yesterday and was blown away. I can count on one hand the cigars that tasted this good so soon upon receipt. My first stab was at the Sumatra and here are the flavors: Chocolate, spice, creaminess, toasty, nutty, dried fruit, herbal notes, peanuts, and a nice earthy tobacco note. And medium strength.

And here is the killer. These cigars range from $2.00-$4.49 a pop. This is the first time I’ve ever smoked an inexpensive cigar that tastes like a $7 or $8 cigar. More later after I allow the samples to rest for a couple weeks. And here is killer2…Cabreras is attempting to get CI to pick them up. CI told them to contact me and have me review the cigars. Holy Macaroni! CI knows that I’m just about the sole reviewer who will tell the truth, nothing but the truth, so help me God. Amen. Gesundheit.

By the midway point, the fruit sweetness receded into the background and the earth notes joined the chocolate in the forefront. Meanwhile along with the fruit sweetness, there were still secondary notes of cream and pepper.
The second half is where all the goodies lay. Flavors become extremely intense.

The stick needs a minor touch up.

LAST THIRD:
Smoke time is two hours and 10 minutes.
The nicotine calms down a bit. My hands are no longer trembling. And I can see out of both eyes now.

Transitions. The magic that occurs on great cigars. Plenty of transitions in the BLTC Deliverance Nocturne Snub Nose.
Led Zep. Can’t go wrong. Ever really listen to the bass playing of John Paul Jones. The man is a genius. On my best day, I couldn’t play like him.

The BLTC Deliverance Nocturne Snub Nose is like an all-day sucker. There seems to be no end in sight.
Even as I smoke the skinny part, it smokes slowly.

My favorite Jimi song is playing: “All Along the Watchtower.” One of my biggest regrets is that I never saw him play live.
The nicotine returns with a vengeance. I have to grab an Atkins Shake to put something in my gut. I live on these things. I’ve lost over 40lbs in the last year thanks to Atkins Shakes. Takes the hunger away so I don’t nosh between my meager meals.

The flavor profile expands exponentially with each puff right to the end.
This BLTC Deliverance Nocturne Snub Nose has been a treat par excellence.
If you haven’t tried it, do it. And tell CF the Katman sent you.
Final smoke time is two hours 30 minutes.

PRICE POINT:
Usually, I rail against double digit prices. Not today. The BLTC Deliverance Nocturne Snub Nose is an incredible cigar experience.
Worth every shekel of the $12.00 price point. Of course, as a member of Cigar Federation you get 10% off with the coupon code of leafenthusiast. Making it a $10.80 cigar.
I checked and both sizes are available in both sizes and a bevy of different counts.

SUMMATION:
I’m too worn out to add a story.
This was the true definition of a cigar experience.
Experienced palates will love this cigar. I think this is a quantum leap for BLTC.
This blend was a result of a learning experience from the other blends.
So many flavors. So much complexity.
If BLTC keeps pumping out cigar blends like the BLTC Deliverance Nocturne Snub Nose, they will become a major force in the cigar industry.