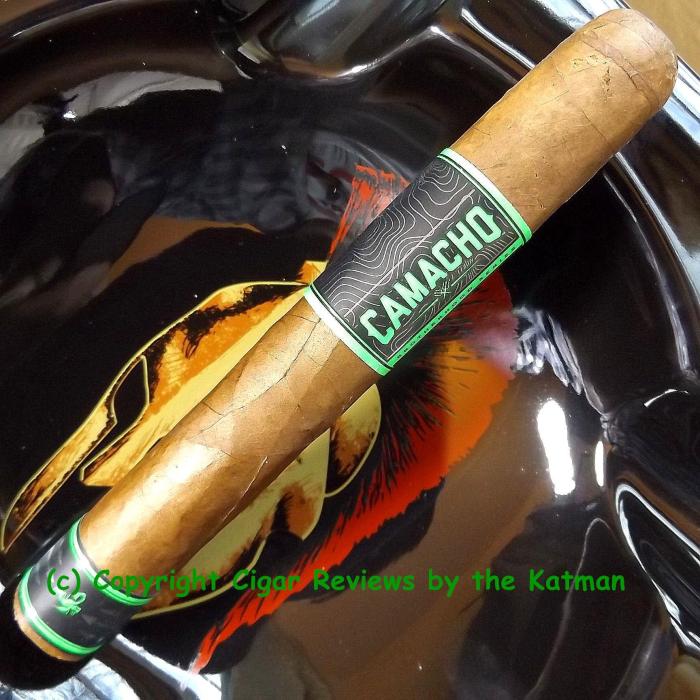 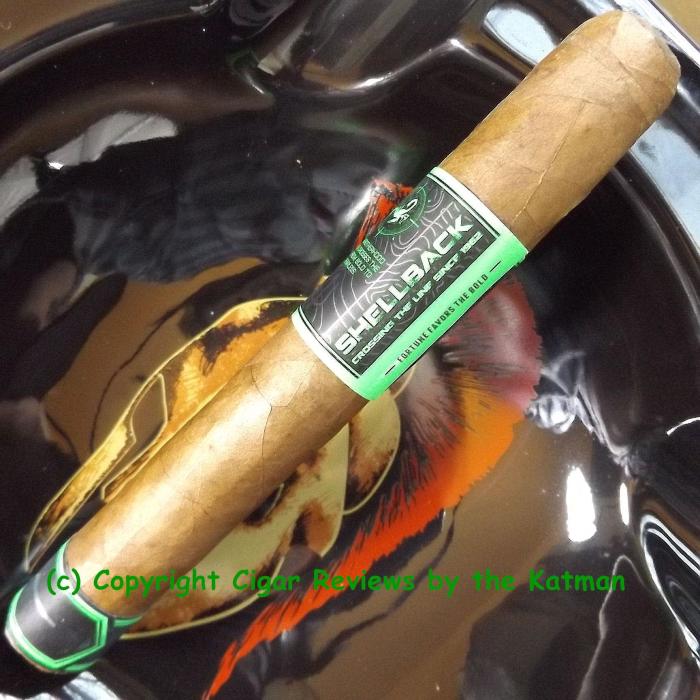 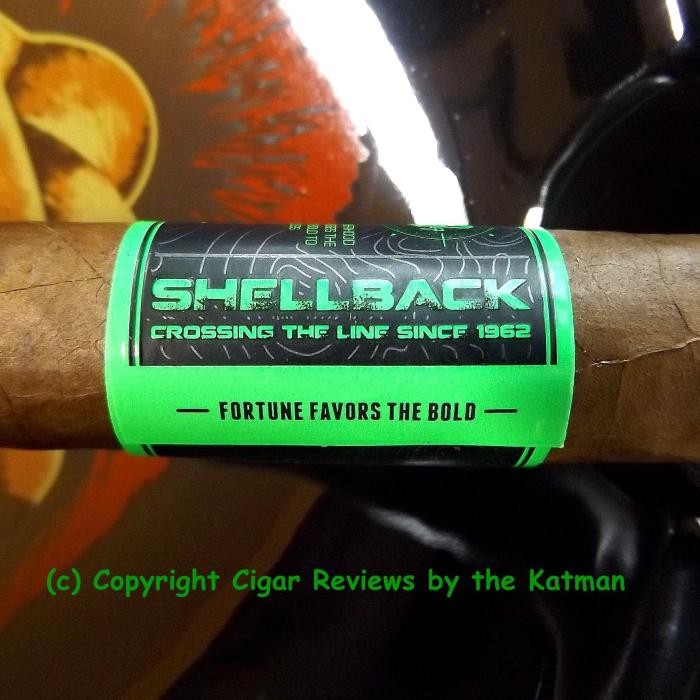 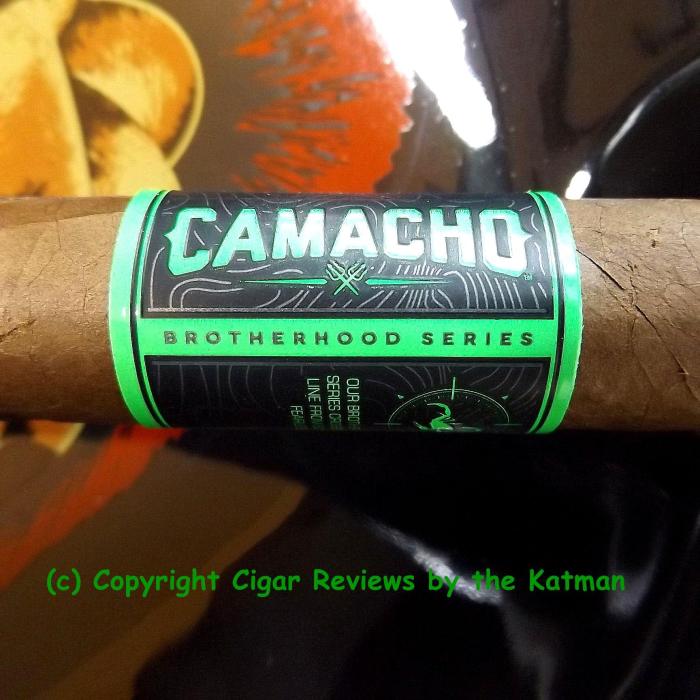 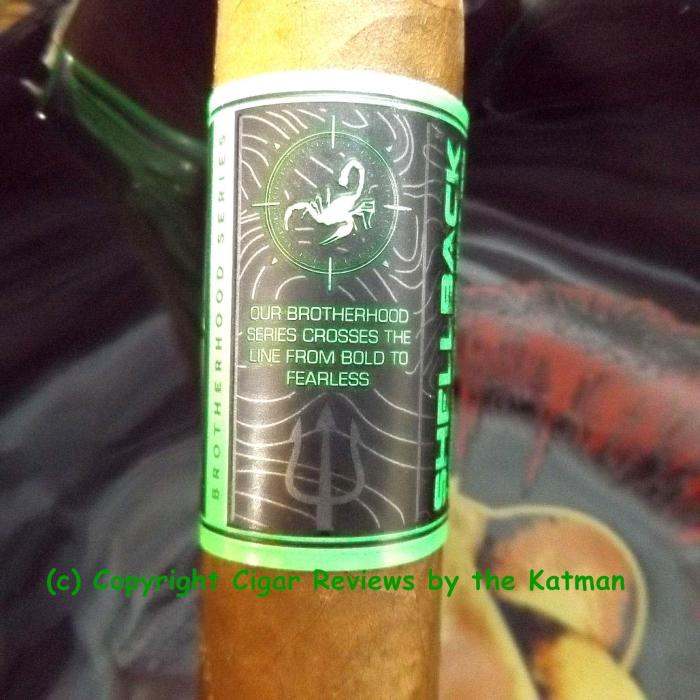 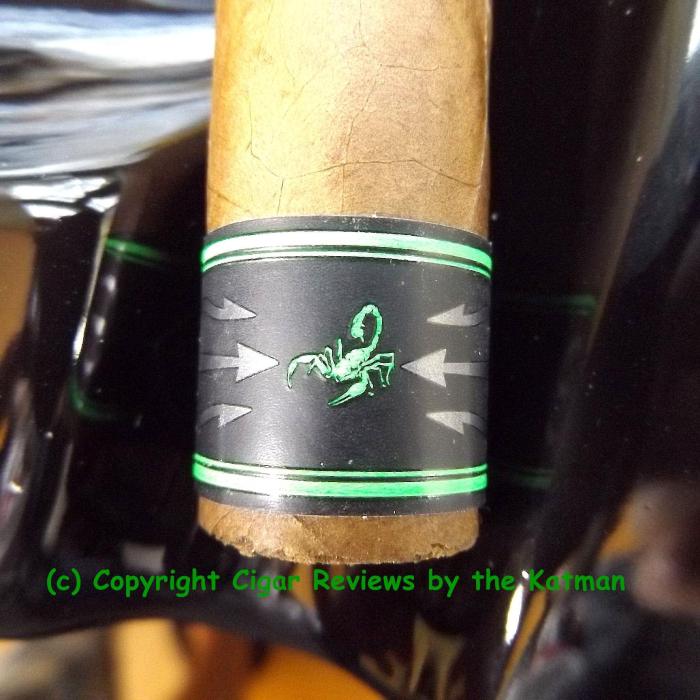 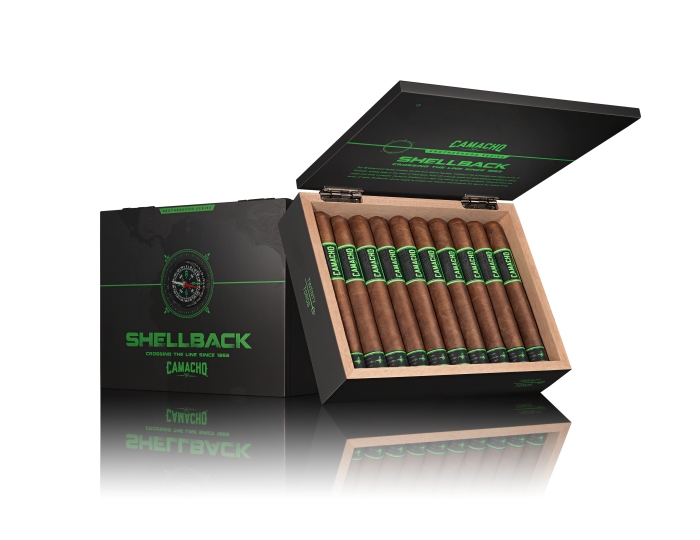 Today we take a look at the new Camacho Shellback Toro LE 2015.
Thanks to Anonymous Stogie Pudding for the stick.

From the Cigar Aficionado web site:
“The first installment of Camacho’s Brotherhood series, the limited-edition Camacho Shellback, is expected to ship nationwide on October 9. The cigar, which comes in one size only—a 6 inch by 50 ring gauge Toro—pays homage to an age-old mariner’s ritual.

“Shellback is the designation given to mariners once they have ‘crossed the line’ of the equator on a naval ship,” said Dylan Austin, director of marketing at Camacho. “They are given this designation after a wild and crazy initiation ceremony. The date, vessel name and longitude of where they crossed are usually glorified as tattoos worn by many Shellbacks.”

“The camaraderie of the Shellbacks inspired Camacho to name the new cigar in their honor, linking this fraternal bond to that of the brotherhood of cigar smokers.

“The [Brotherhood] Series will have fresh new concepts each year, all of them honoring a specific ‘Brotherhood’ that we feel best reflects the ‘Live Loud’ world of Camacho.”
“Previous limited editions, such as the Double Shock and Scorpion, were not part of the Brotherhood series.
“The Shellback is the second limited edition in the company’s new Brotherhood Series.
“The Shellback follows the 2013’s Camacho Blackout and 2014’s Double Shock as annual limited releases by the company.
“The Shellback blend consists of a Nicaraguan Corojo binder, Nicaraguan filler and an Ecuadoran Habano wrapper. The decision to move away from Camacho’s traditional Honduran blends was inspired by the adventurous nature of the cigar’s namesake.

“We like to stay anchored to our Honduran roots,” said Austin, “but with this particular project we decided to reach for these high-grade Nicaraguan tobaccos.”

“Shellbacks come in boxes of twenty, with a suggested retail price of $12 each. Only 4,000 boxes will be released.”
I may be reviewing this cigar too soon as I’ve only had it for a month. We shall see.

DESCRIPTION:
First thing I notice is how weightless the cigar is. Like a handful of toothpicks. I’m guessing this will be a quick smoke.
But still a well-made cigar…for the most part. Mostly tight seams. Lots of veins. A quadruple cap. The wrapper is an oily, light russet brown.
The cigar has double cigar bands. Actually, a main band and a footer band. I don’t like the new Camacho bands. They are silly looking with that scorpion logo. And fortune cookie sayings. The sea green is a bit off putting. Just like you don’t eat green candy.

Wow. I’m shocked. I’m not much of a fan of the “new” Camacho but maybe they have turned the corner with this blend. For $12.00, they damn well better have. Meanwhile, you can buy the original; 10 year aged real Camachos for pennies on the dollar. What’s wrong with this picture?

Smoke pours from the foot like no cigar I’ve smoked in a long time.
The char line is super. The upside that I feared might not happen was unwarranted. Most new Camacho sticks, as well as the old ones, take a long time in one’s humidor. This one only had a month. It has all the branding of the New Breed method of cigar blending. About fucking time!
Strength is medium body on its way to medium/full shortly. 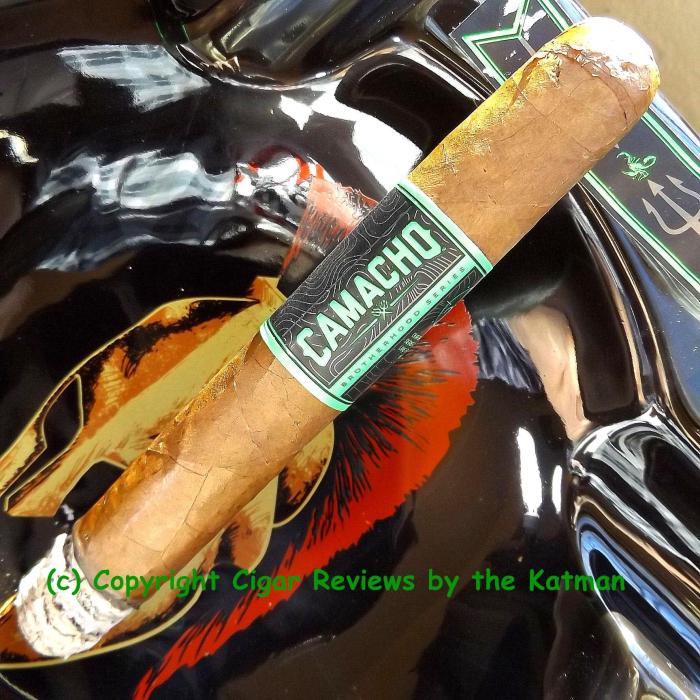 Complexity settles in early. The balance is good but hard to discern due to so many flavors happening at once. And the finish is long and chewy. Like me.
The char line becomes a bit wavy. Fingers crossed it doesn’t double cross me.

There a few flavors I can’t put a handle on. My palate was unexpectedly overwhelmed by this great cigar and I just wasn’t prepared for it.
Charlotte left for work and the music goes on. Today’s selection is the double CD package of “The Best of Led Zeppelin.” Can it get any better than this? No.

I’m surprised that the Camacho Shellback Toro LE 2015 isn’t burning faster considering how light in the shorts it is.
Man, it just hit flavor bomb status after only 10 minutes.
Palate, don’t fail me now. Exciting things going on here.
I bow my head, take some puffs, sip some water and….Voila!

The flavors I missed are: raw cashews, warm crusty French bread, toffee on top of the caramel, notes of Worcestershire sauce, meaty, the Midori is gone now, Cola!..that was the mysterious missing flavor, and soft salty pretzel.
The Camacho Shellback Toro LE 2015 is beginning to need several minor char line touch ups. A $12.00 cigar should be pristine and not need assistance.

SECOND THIRD:
Smoke time is 20 minutes.
The sun is out and making the wrapper look much lighter than it really is. 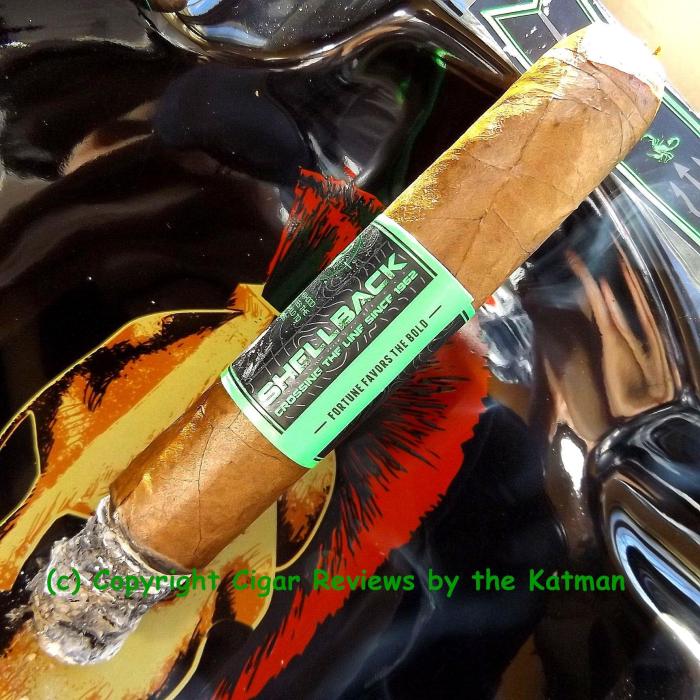 The Camacho Shellback Toro LE 2015 is nothing like the previous blends that Davidoff put together. Maybe this new “Brotherhood Series” will pump out really good cigars…at a ridiculous price.
Big points will be detracted because the cigar isn’t packed sufficiently and is burning too quickly. It nearly burns like a corona.

But it tastes good. Now it tastes like a hamburger with all the trimmings. Yeah, it’s different. I gotta hand that to it. It’s really different. Crazy sonovabitch!
It has all the usual malt flavorings. No need to list them all.
The burn line is a mess. 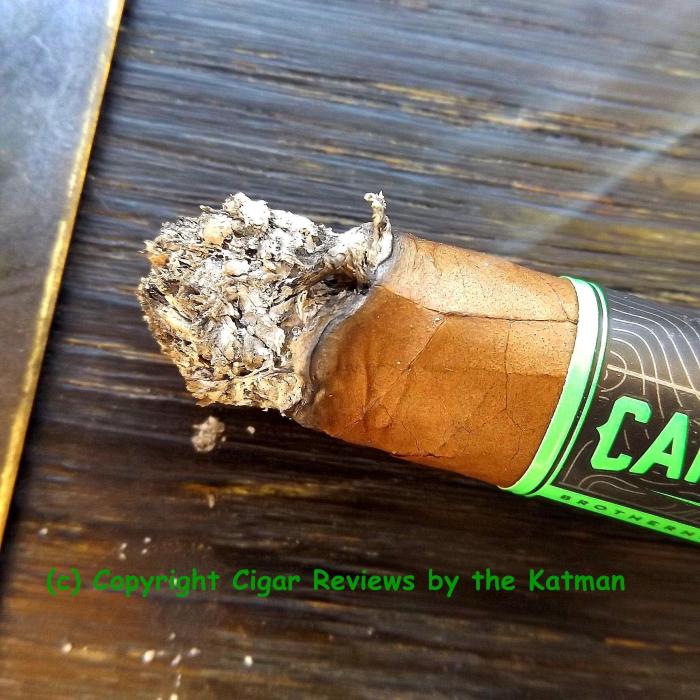 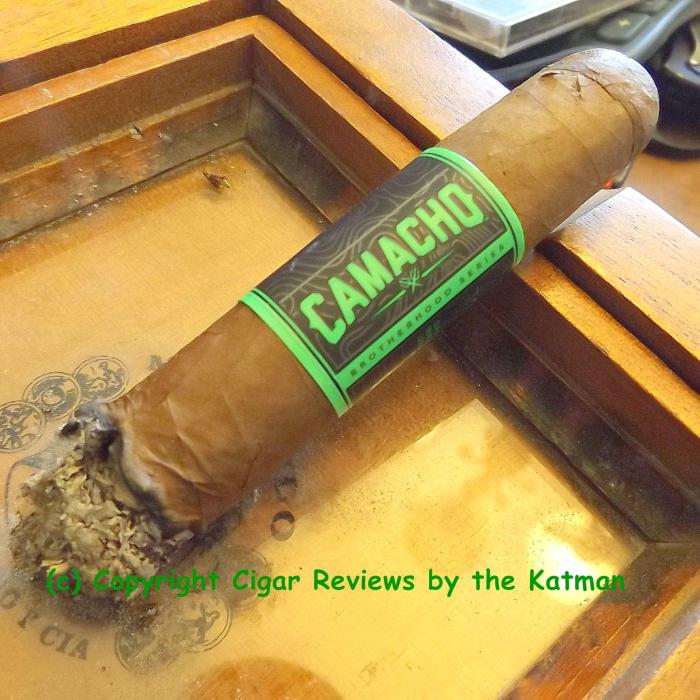 Strength hits medium/full. But oh so smooth….
The spiciness is on the wane. The creaminess, chocolate, and coffee really take off.
The ancillary flavors dissipate some.

Not a single online review. I do believe that everyone was fooled by the fact that Camacho blends always take forever in one’s humidor. And I did smoke one of the two that Pudding sent me about a week after receipt and it was not even in the vicinity of being ready to smoke. I was very hesitant about this morning’s review. But my fears have been dashed to the rocks.
I near the halfway point. The Camacho Shellback Toro LE 2015 has a spectacular flavor profile. I give it a 92 rating. I give the construction an 82. 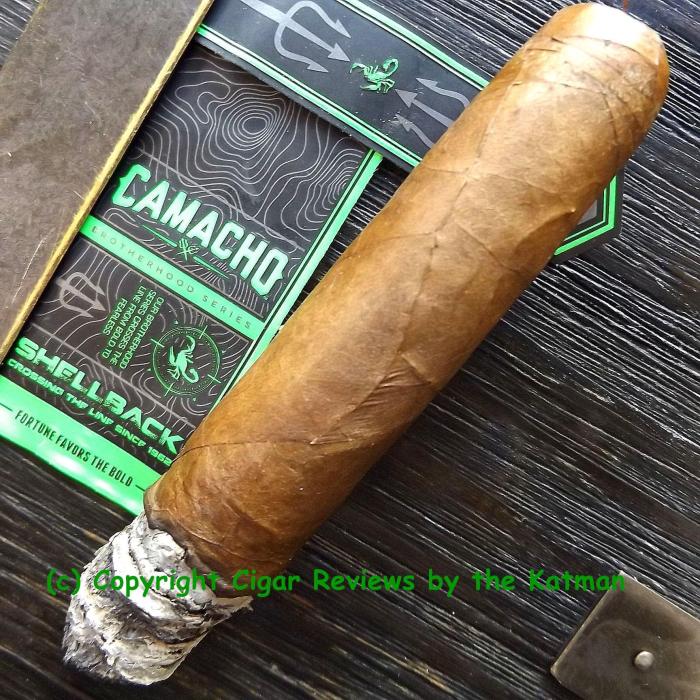 The cigar band won’t come off cleanly. More points deducted.
Such a dichotomy occurring. Fantastic flavor with below average construction. WTF?
I’m most disappointed in the skimpy filler. It is burning so quickly, I have little time to banter with clever witticisms. (I heard you. Shut up).

A tomato presence pops up.
I’d love to get a shot of how smoky the cigar is but it doesn’t last between me puffing and putting it down for a photo.
Nicotine shows itself.
Halfway point. Smoke time is 30 minutes.
Strength hits full bodied.

This is the first new Camacho to touch the hem of the original Camacho blends by Christian Eiroa. I wouldn’t be surprised if Davidoff secretly got him in on the blend design.
Finally, I seem to have passed the crappy construction and now the char line is dead nuts.
A few moments after typing the last sentence, a seam comes loose and the wrapper unfolds. I grab my glue and fix it. Sonovabitch 2.0. 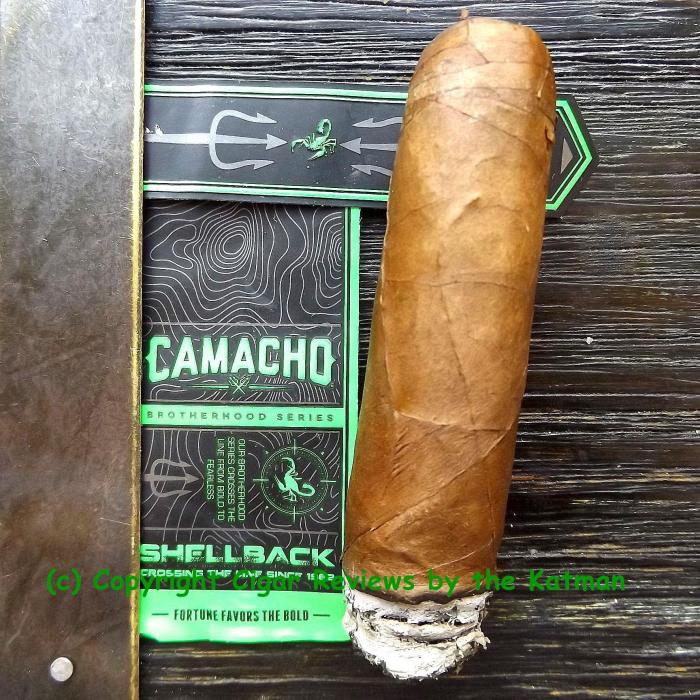 I noticed that the Fallen Angel Devil’s Ink deal disappeared. I guess CI was tired of selling the boxes for less than half retail. I hope you got in on it. Thank you to the kind readers that sent me some of these great cigars.
Countless transitions occur. That’s a good thing.

I don’t remember having any trouble with the first stick I smoked but that was weeks ago and my memory really doesn’t go back that far. Just a guess…

I got some samples from George Rodriguez of GTO Cigars. Five sticks to be exact. But only one of each blend. Manufacturers just don’t get it. A reviewer needs a few sticks to really be able to review a cigar. Not just one. So he goes to the back of the line. Without being able to sample one to see how much humidor time they will need, I am forced to let them sit for a month or two.
Don’t get me wrong. I truly appreciate the gesture. But I have a standard policy that I get a 5 pack of each blend for review. No one pays attention. My readers are more generous.

And thanks to Darryl Martin, Miguel Castro, and Carter Tinsley. It seems that I have a small core group of friends that send me cigars. Out of thousands of readers, it’s always the same guys. I’d be lost without them. They go to great expense to make sure I have cigars for review. God bless them.
I will list all of my donors soon.
The char line goes nuts on me once again. This is horseshit.

LAST THIRD:
Smoke time is 45 minutes.
Here are the flavors: Creaminess, chocolate, coffee, spice, nuts, toasty, caramel, vegetal notes, meaty, and pretzel.
The best part of the cigar was in the first third. The Camacho Shellback Toro LE 2015 can’t seem to hold its own. Now it has descended into your usual Davidoff style of blending Camacho cigars. 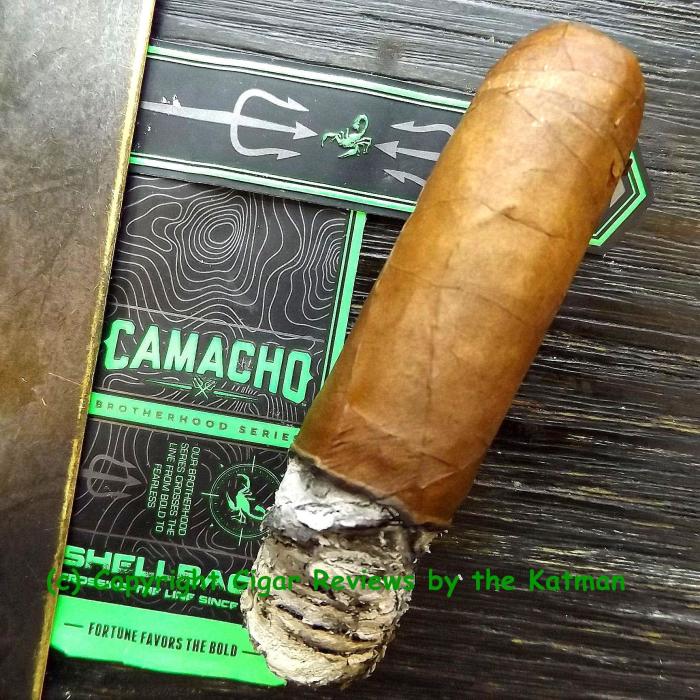 What a shame. The start had so much potential. The big, bombastic flavor profile is now just hanging like a limp dick.
Cracks begin to form. Sonovabitch 3.0.
I will tell you right now that if this is an example of what is coming down the line from the new Brotherhood Series, I’m underwhelmed.

And the price. Oh…hahaha. Not only is this cigar not worth $12.00, but it should be in the $7 range. Almost half.
That’s OK. Word will get out. But probably not soon enough as this is a limited run. The Camacho Shellback Toro LE 2015 will be gone by the time word of mouth has destroyed it.

If they are $12 online, God help you at your local B & M. You’re probably looking at a $14 stick…with your state taxes.
The char line has been a constant annoyance.
Nicotine has not gotten worse. Still full bodied.
But flavors have flattened out. 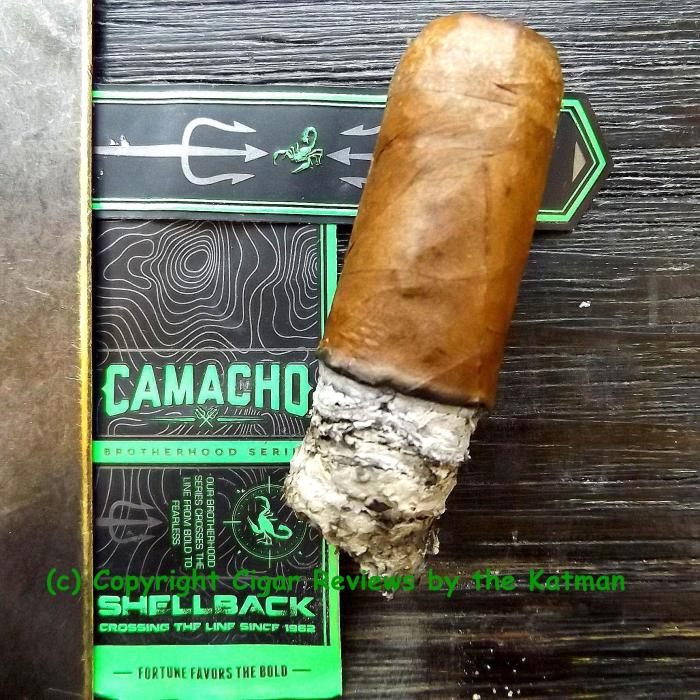 Based on what I tasted, this cigar was rarin’ to go. So no excuses for more humidor time.

With all the hoopla that Davidoff put out in the PR game, I had much higher expectations. That’s why I wanted this cigar.
As our beloved ex-president, George W., said: “There’s an old saying in Tennessee — I know it’s in Texas, probably in Tennessee — that says, fool me once, shame on — shame on you. Fool me — you can’t get fooled again.”
Couldn’t have said it worse if I tried. And I have Alzheimer’s.

I now expect the next blend in the Brotherhood Series to cost even more. This time, I won’t “..get fooled again.”
Take a pass on the Camacho Shellback Toro LE 2015. 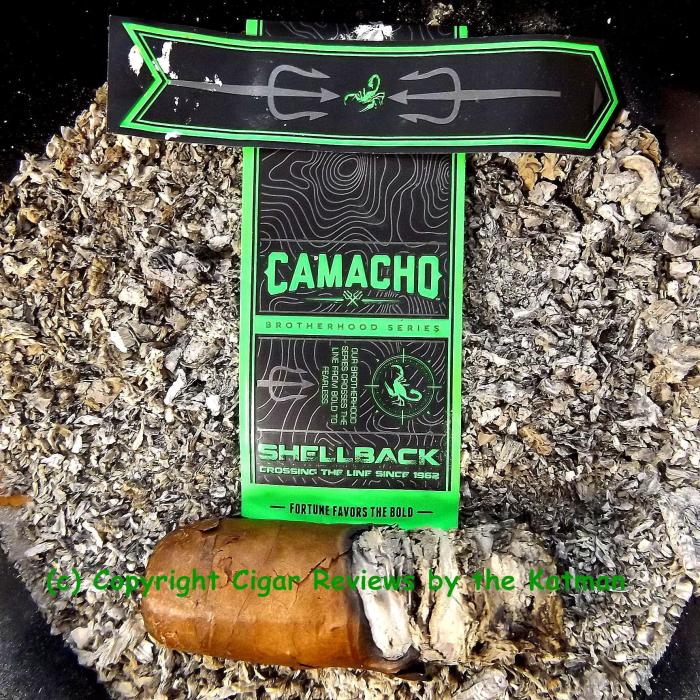