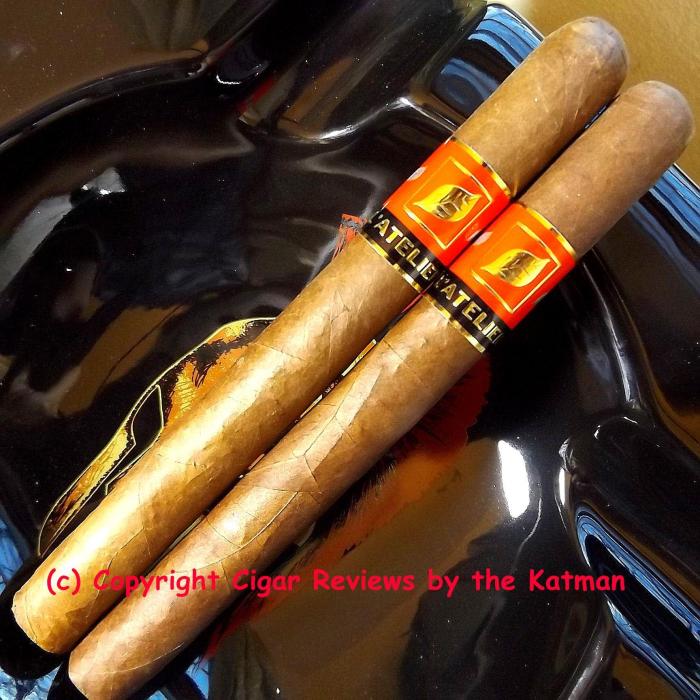 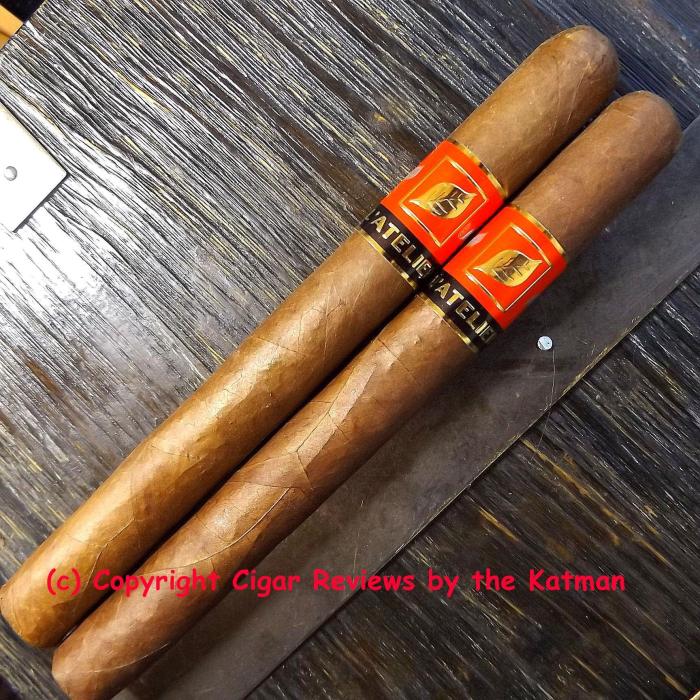 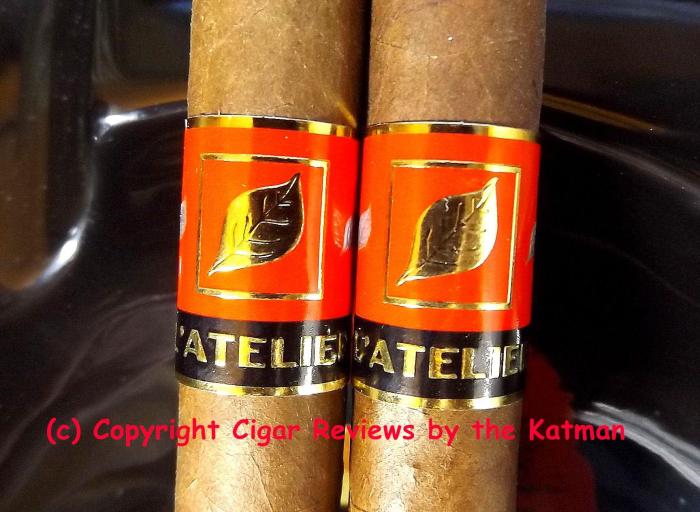 Today we take a look at the L’Atelier Extension de la Racine ER15.

I want to start off by saying something nice. I was contacted by Drew Newman of J.C. Newman. He read my review of the Diamond Crown Julius Caeser that I wrote back in March of 2014. The review did not end well mostly due to construction issues.
Drew is sending me more Diamond Crown Julius Caeser and asks I give the blend a second chance. He was polite, sincere, and genuine. Don’t see that a lot.
I will comply. If someone is that sincere, then a second chance is the only polite thing to do. Fingers crossed.
In addition, he is sending me some new Diamond Crown Black Diamond cigars that will be released in 2016.
That’s class.

And many thanks to friend, Miguel Castro, for the cigars.

DESCRIPTION:
Not a bad looking stick. A little rustic but nothing outside the parameters of good rolling.
The wrapper is an oily, reddish russet brown color. Seams are tight. Not a lot of veins. Impeccably applied triple cap. The stick is solid without soft spots.
The cigar band is the typical L’Atelier style with the exception of it being red, black, and gold.

AROMAS AND COLD DRAW NOTES:
From the shaft, I smell lots of good stuff: orange citrus, sweetness, Courvoisier cognac, spice, oak, almonds, vanilla and floral notes.
From the clipped cap and the foot, I smell hay and the same as above.
The cold draw presents flavors of red pepper, chocolate, cream, orange citrus, malt, and coffee.

FIRST THIRD:
The draw is good. Lots of smoke.
And then that Garcia Blast of Pepper. Wowie Whoaie! 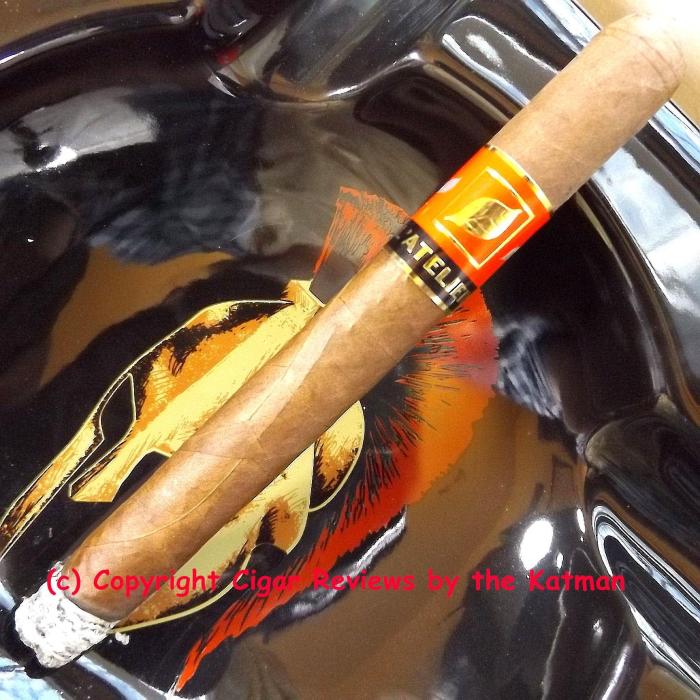 I like that Garcia blends stay spicy nearly throughout the cigar experience. That’s a big plus in my book.
But they tend to have the same thread running through them all. The Nic puro flavor profile. You rarely see anything out of the ordinary. Sure, it tastes great but it is not a ground breaker. Just forward momentum.
The L’Atelier Extension de la Racine ER15 smokes faster than I would like. I am nearly upon the next third and only spent 20 minutes with the first third. Yes, I know it’s a Lancero.

SECOND THIRD:
Smoke time is 17 minutes.
I remove the cigar band off of a second stick. And it takes a huge chunk of wrapper with it. Nicht gut. Now I worry what will happen when I remove this cigar’s band. 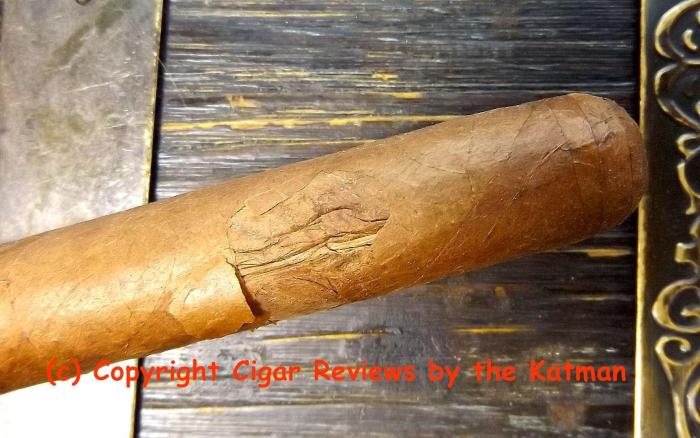 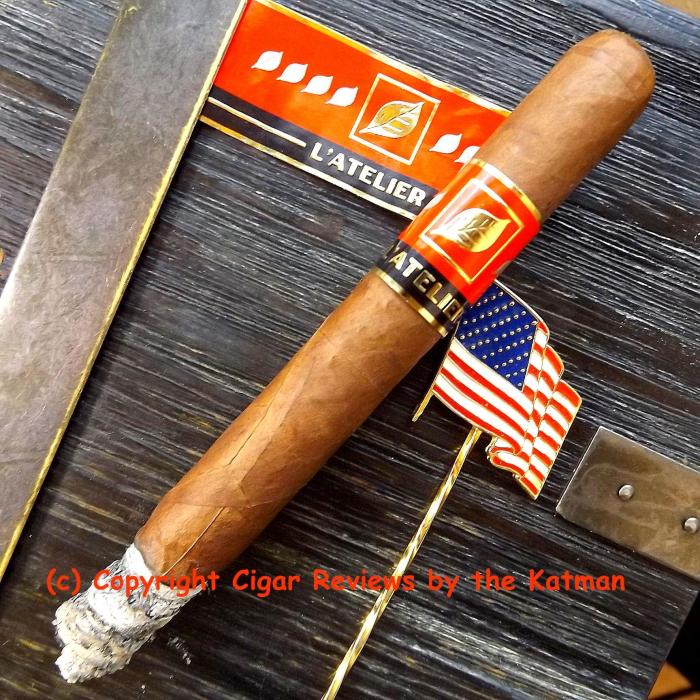 The spiciness dissipates quite a bit. Some of the flavors flatten out.
Once again: Chocolate, creaminess, maple, coffee, oak, cedar, toasty, orange citrus, vanilla, almonds, and lots of malts.
Halfwheel.com is the best source for getting the entire skinny on a cigar. You get all the correct leaf stats, background info, and I enjoy reading the reviewer’s reaction to the cigar. We don’t agree very often but many times, we do.

And Halfwheel mentions a subtle flavor of peppermint. I taste that too. It was elusive at first until I checked the Halfwheel review. And bang! That was it: Peppermint. But it is so slight; it might be wintergreen or plain mint.

I check Small Batch Cigar and Cigar Federation because of the 10% discount and I’m pretty sure you all shop there. SBC has a damn fine price. While CF is charging MSRP. So SBC is the place to snag these. If you know of a cheaper price somewhere else, please comment below. Let us help our brothers and sisters find the best deal.

I have to hand it to Pete Johnson. He could have followed suit with the other new blends and charged a fortune, but he didn’t. Not even a double digit cigar. And he has kept the prices the same even though the sizes have changed. I genuflect to the all-powerful Johnson. Pete, not mine.

The char line needs a major touch up.
The L’Atelier Extension de la Racine ER15 is not a bold cigar. It is staying in the safe category. Johnson knows his customer base and gives them more of the same. Very much a Nic puro flavor profile.

I’m not a Lancero smoker. They smoke too quickly and tend to have burn issues. I would have preferred that Johnson picked another size for this year’s release.
For the money, you got a better deal with the ER13 (5.875 x 52) and the ER14 (6.125 x 52 Torpedo). These were nice leisurely smokes while this one is whisking by like smoking a cigarette.
Yet, the L’Atelier Extension de la Racine ER15 has definitive positive points.
Strength moves to medium/full as I hit the halfway point.
And I hit the Sweet Spot. Smoke time is 25 minutes. 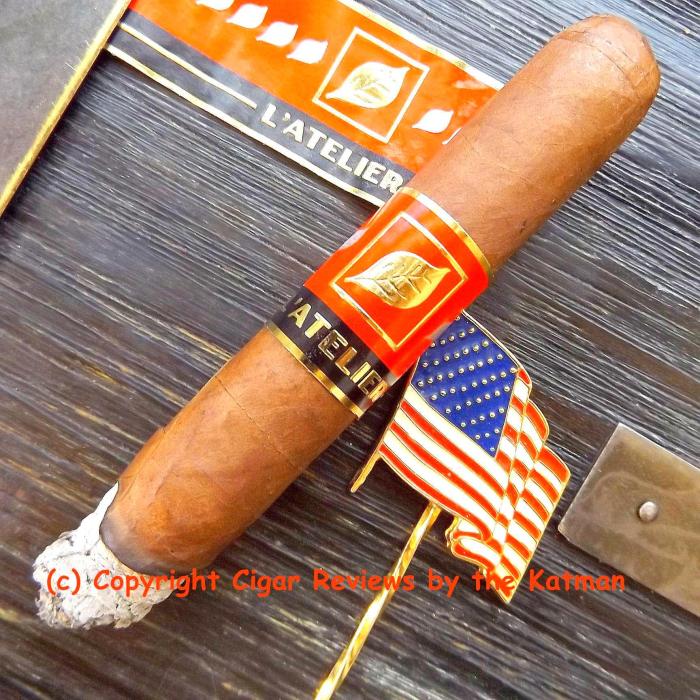 Flavors blossom now. Everything is in adult portions.
The spiciness returns with a vengeance. Now we have some oomph.
The typical Nic puro flavors are booming. The chocolate and creaminess have a jalapeno influence. The orange citrus is the right offset. The ancillary flavors are bolder as well. Nice.

This is a very good cigar and because the price point is reasonable for a limited edition, I will be kind to it. To be honest, there are plenty of $7 sticks out there every bit as good. But then, if you make your purchase at SBC, you are paying $7 and a few pennies. That is the correct price point. 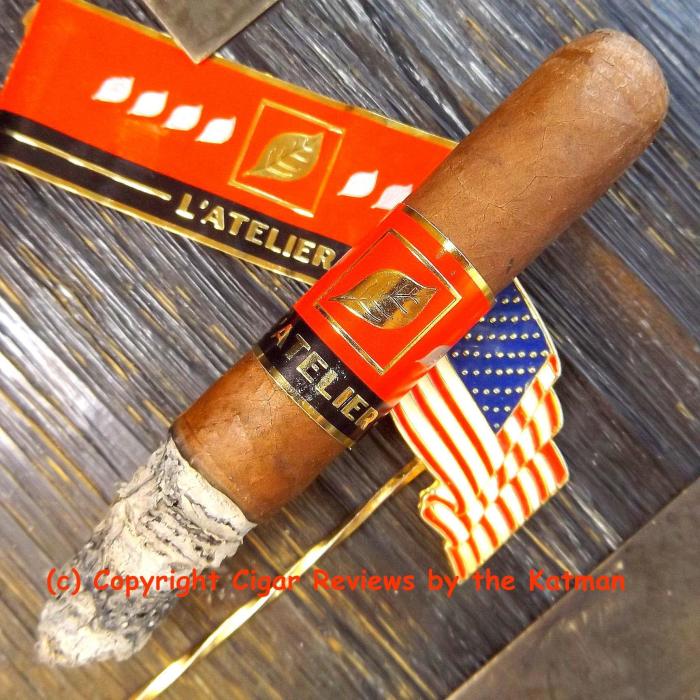 Charlotte leaves for work and I turn the music on. “Stairway to Heaven” is playing. Back when it came out, my cover band “Homegrown” immediately learned the entire album. We played almost exclusively for the Marines at El Toro Air base in Tustin, CA. Every weekend. It drove the other bookers nuts that they couldn’t get their bands in but the enlisted men wanted us because we were the perfect mimic band. We could do any band sounding exactly as it was recorded. A very versatile singer and lead guitarist.

The EM club was “the” place to play. The officer’s club was a nightmare. Anyway, there were hundreds of Marines that came to see us play on Friday and Saturday. We made a lot of friends amongst the Marines. And when a drunken Marine tried to come up on stage and grab the mic away from our singer, a coterie of other more sober Marines stormed the stage and carried the fella off. It was a hoot. I hold my days of playing with Homegrown dearest to my heart. Even more so than Curved Air. We played together for 3 years before the drummer took a gig with a Vegas show band and we fell apart.
I only have these little Instamatic photos to prove I was in the band: 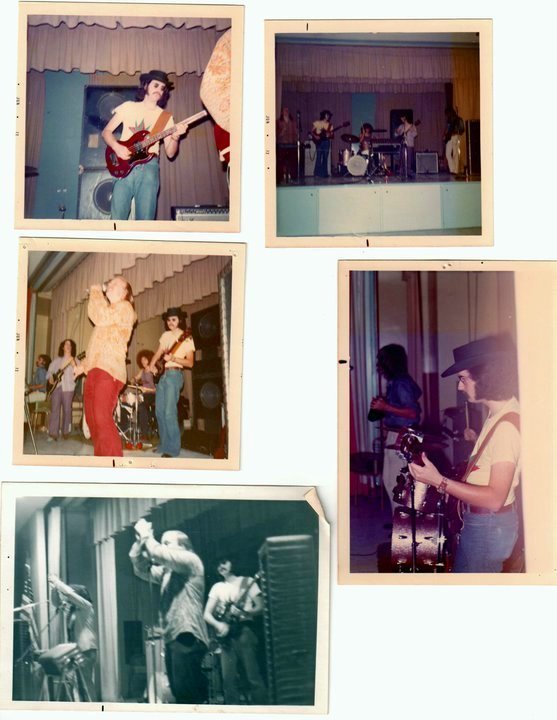 LAST THIRD:
Smoke time is 45 minutes.
The last third is absolutely delicious.
Every flavor in its place.

If it were any creamier, it would be like drinking heavy cream out of a glass.
It would have been nice if the L’Atelier Extension de la Racine ER15 would have started like this and then transitioned to something extraordinary, I would rate experience higher. 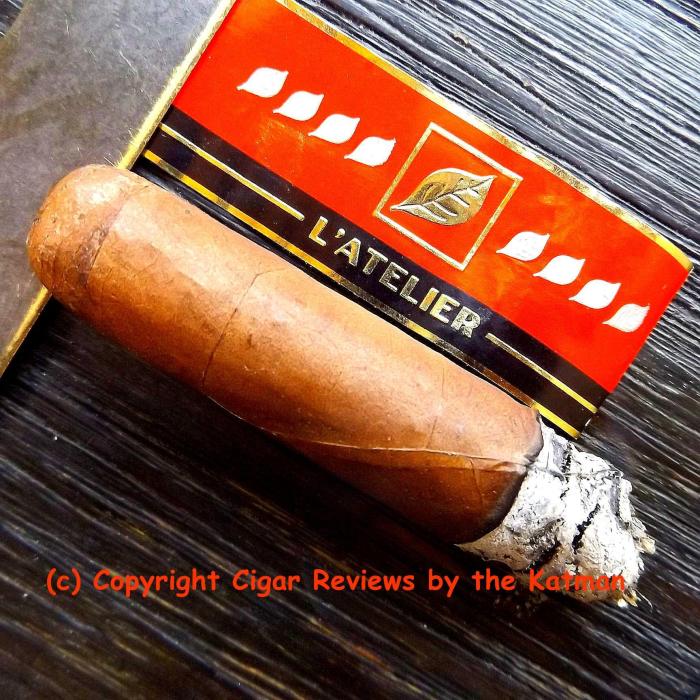 The L’Atelier Extension de la Racine ER15 is now a major flavor bomb. The nuance, the subtlety, the complexity, the balance, and the finish is something else.
This is why I don’t care for lanceros. The smoke time. If you can milk an hour out of this size, you are doing well. I think I will be just shy of an hour of smoke time.
The last third leaves me wanting more.

I check and SBC has plenty of 5 packs. And a few boxes. They also have a sampler of the ER14 and the ER15. That’s pretty cool. Two each for $33.00 before discount. Plus they still carry the ER14 in 5 packs and boxes. And they have a nice L’Atelier Sampler 5 Pack plus surprise for $39.00.

Only 1500 boxes were released in September. So it is my guess they won’t be around for long.
At $7.43 (Includes 10% discount) a stick at SBC, you can’t go wrong. Based on that price, I highly recommend snagging a 5 pack or any of the other manifestations of available forms you can buy this cigar in.
Strength finalizes out at medium/full. 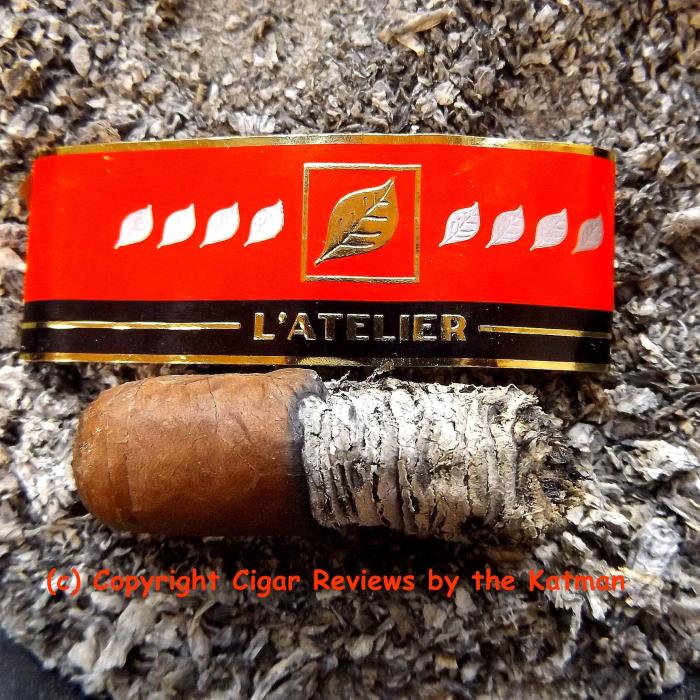 And now for something completely different:
I’ve written this story a couple times but not for a while. So my regular readers can pass but for the new readers…enjoy.
Back to El Toro Marine Base.

We always got to the huge rec room in the afternoon to set up. Always on a Friday.
A lot of Marines would show up to help unload and just hang out. A nicer group of fellas couldn’t be found.
We became friends with so many of them that I can’t count them all. They always bought us beers.

One Marine, whose name was Jose (I think), would have all kinds of drugs with him. Our lead singer, Mark, took any drug given to him; even acid, and would still perform impeccably. I could never figure out how he did that. The rest of the band would stand outside the hall and smoke doobs with the Marines. Remember, it was the late 60’s and early 70’s.
Jose was a little guy. And he always made us laugh. Such a funny guy.

One day while unloading, a bunch of Marines rushed us and asked if we heard what happened to Jose?
Our faces paled waiting to hear the worst.
“He took a bunch of downers. He went to the top of the 3 story barrack and fell off.”
Oh God. We knew he must have been killed.
And then one Marine said, “But don’t worry. He will still be here tonight.”
WTF?
“He just got a lot of bruises.”
WTF x 2?
He was so loose from the downers that he just bounced a couple times and got up and walked away. He never told his superiors.

That night, we saw Jose staggering in. He had a gimpy leg but that seemed to be it.
He came over laughing and asked how we were?
“Never mind us. How are you?”
“I’m fine. Just sore.”

And then he handed a handful of pills to Mark. Turned around, got a beer, and sat down at a table upfront.

Another time, a really drunk Marine got angry at me. I must have been sarcastic as I replied to something he said to me.
He lurched at me and could have squashed me. I had my bass around my shoulders. Without thinking, I slammed the head of the bass squarely into his face. He went down like a sack of potatoes. Out cold.

The other Marines couldn’t stop laughing. When the drunken Marine awoke, he apologized and the couple hundred Marines roared and applauded.

Once, we played at Camp Pendleton. A recruit operation. Boot camp. It was one of the worst nights of our lives.
Hundreds of drunken Marines who had a two year enrollment which meant they were taught to pull a trigger and then sent off to Viet Nam.
In between sets, they forced themselves into our dressing room. All of them crying. “I don’t want to die.”
We tried locking the door the rest of the evening but they got in anyway.

We vowed to never play there again. It was so disheartening thinking of these poor souls who were destined to fight a nasty war. And we wondered how many we met would end up dead or wounded.
It was a totally different environment than El Toro. So depressing.
We went back to playing El Toro til the demise of the band. Some great times with brave Marines. 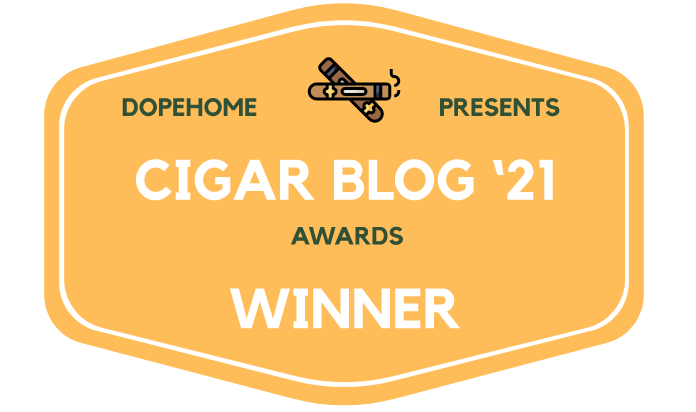 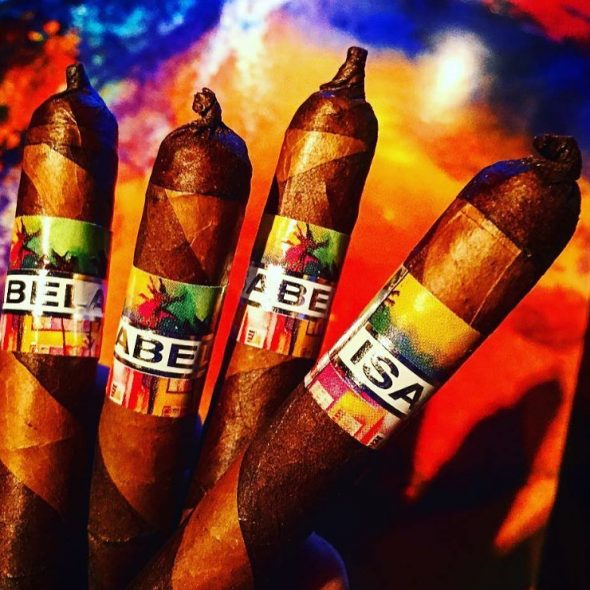 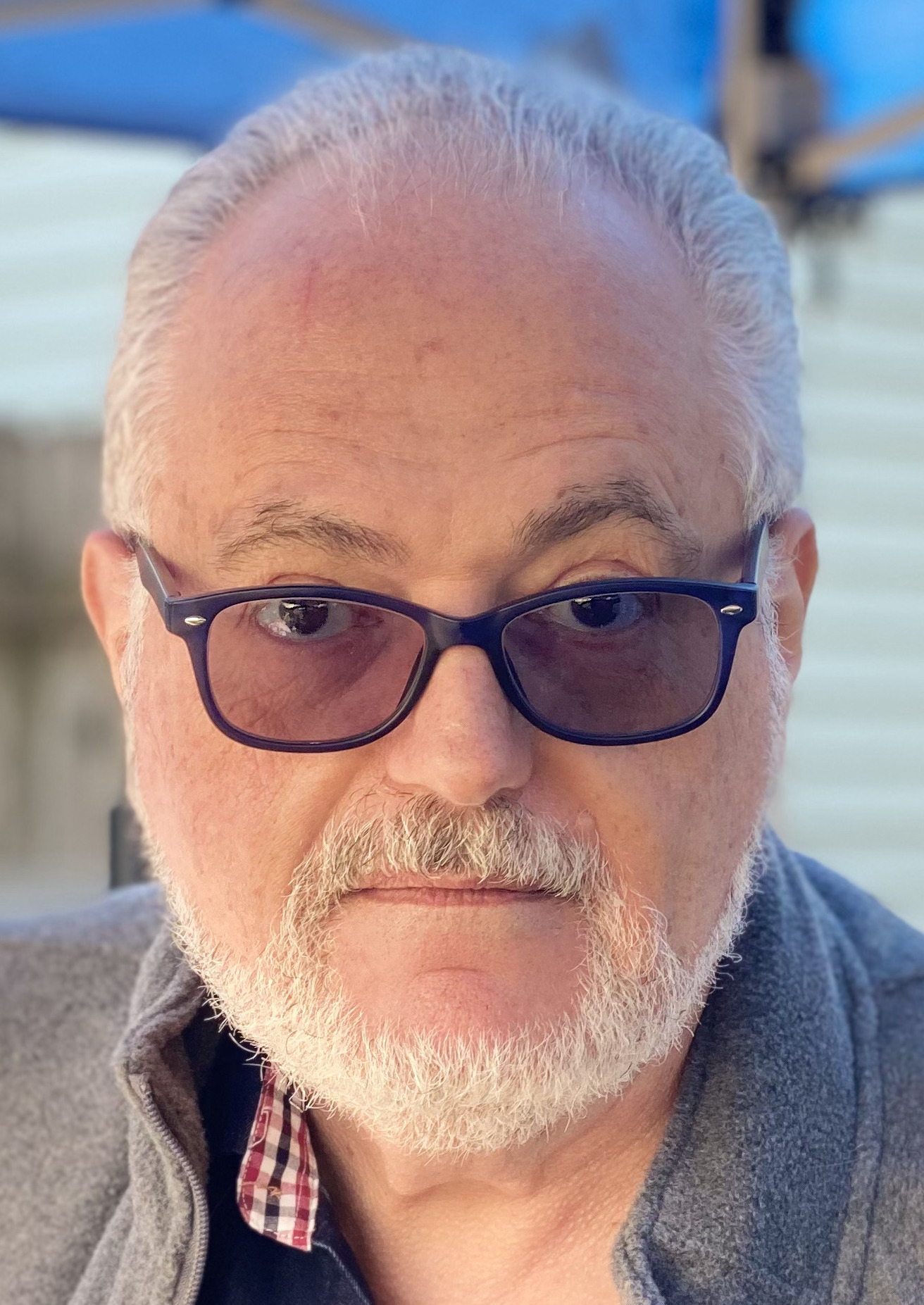