Today we take a look at the Tatuaje Monster Series #8 The Hyde. Or in the shorter version: Tatuaje The Hyde.
This was a gifted cigar but I failed to write down who sent it to me. So if you please contact me, I will add your name to the review.

BACKGROUND:
Factory: My Father Cigars S.A.
Date Released: October, 2015
Limited production: 666 Dress Boxes of 13 Cigars and 4,500 Plain Boxes of 10 Cigars
Monster Series first released in 2008 with The Drac.
Debuted at the 2015 IPCPR trade show.
Only 13 retailers received the cigars for sale. Go to Halfwheel.com to see the list. Plus, they have some great photos of the entire Monster Series.
The cigar has a Cuban-style 109 cap.
According to Halfwheel.com:
“There are now 21 releases in the Monster Series family. The plan is to have a total of 13 regular Monsters.”

DESCRIPTION:
A big cigar with fairly tight seams. Lots of veins. A very nice 109 cap. The wrapper is an oily, coffee bean color with a bit of tooth.
I found several soft spots.

FIRST THIRD:
The draw is a tad bit tight but not cigar awl is needed.
A few moments into the lighting up ceremony, I get a big blast of Pepin Garcia right in the puss. It is sweet and creamy as well. Then the flavors cascade: dark chocolate, nutty, dark espresso, cedar, luscious malts, caramel, and a rich earthy note.

The rich, creamy hot pepper is stupendous, amazing, astounding, astonishing, extraordinary, remarkable, phenomenal, staggering, and breathtaking. Thank God for my Thesaurus. (And all in alphabetical order).
Strength is on its way to medium/full. 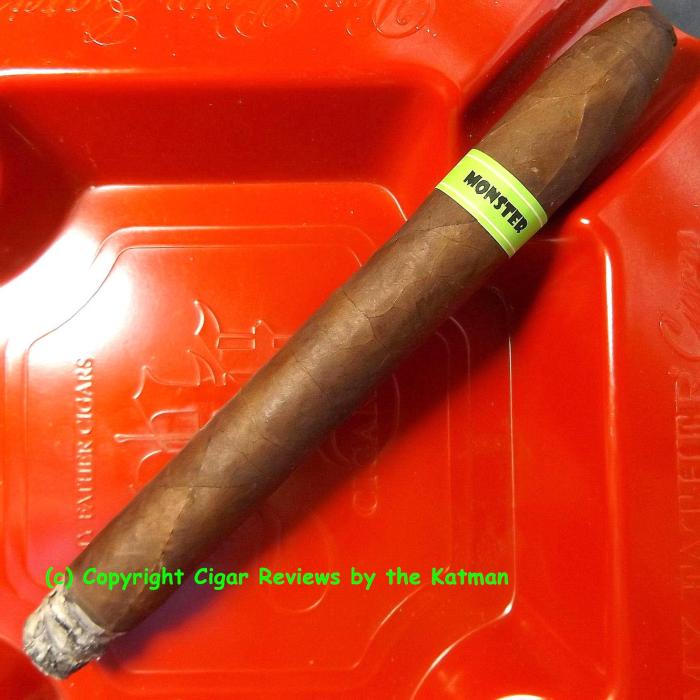 But to be quite honest, the flavor profile is what I expect for a cigar with an Ecuadorian wrapper and Nic binder and fillers. So nothing really out of the ordinary…but Johnson and Garcia have managed to stuff the bird with loads of flavor.

The Cuban Classic 109 cap is a cross between a belicoso cap, a normal cap; and is often called a bullet cap. From CigarSmoke.org: “The 109 cap allows the cigar smoker to control the flow for a smaller or larger draw.” But it makes it more difficult to hold the cigar between your lips instead of your teeth while typing. Feels like a rectal thermometer or Fleet Enema is trying to slide out gently. Don’t ask.

Strength is a solid medium/full now.
But the draw is just darn too tight. Out comes the cigar awl and down the cap it goes about halfway. I’ve upped the humidity in my humidor to 70.5% and that helps keep the cigar a bit moister for the cold hard Wisconsin winter.

The wrapper really isn’t that interesting looking. The oiliness can only be seen in direct sunlight. Otherwise, it has more of a matte looking finish. So I shall refrain from taking the same photo over and over.
Construction is good. The char line behaves. And I have a plan to solve the war in the Middle East. Pick one.

The Tatuaje Monster Series #8 The Hyde is not a complex cigar. Nice flavor profile but no real transitions. Oh lawdy, lawdy, Miss Clawdy. I do believe this will be one more log on the pile in which the flavor profile only exceeds itself during the last third. And this being a 7” long cigar, it might take a while. Maybe I will translate the Bible’s Old Testament from English to the ancient Aramaic for you while we wait for the Tatuaje Monster Series #8 The Hyde to burn down.

No Halloween….shit…I’m leaving that there for you to see what a dope I am. No Thanksgiving for us today. Katie had four wisdom teeth taken out yesterday and since she is our only family, we have postponed the holiday til December 7. Oh shit. That’s Pearl Harbor Day. Fucking great. Thanksgiving on one of the worst atrocities to hit the U.S.A. Kids…

This morning, I got up at 7am and rushed to the big grocery store and got some nice steaks, potatoes, and white asparagus for Charlotte and me for tonight. And for Katie, I bought yogurt, pudding cups, Jell-O cups, applesauce cups, and something else. Can’t remember. The daughter of the dope didn’t buy this shit before she had surgery. So she has nothing to eat and her husband is up north hunting for elk.

I read the Halfwheel.com review and he reported a mint flavor that was very strong but only available through the retrohale. So what the hell…..yep, that cow poke was right on the money. A light minty flavor. Huh. Well, damn pardner. I’d never have caught that because I stopped retrohaling to save my sinuses a couple years ago. I was walking around with Ocean in my pocket all the time to moisten my shnoz all the time. So I just gave it up. 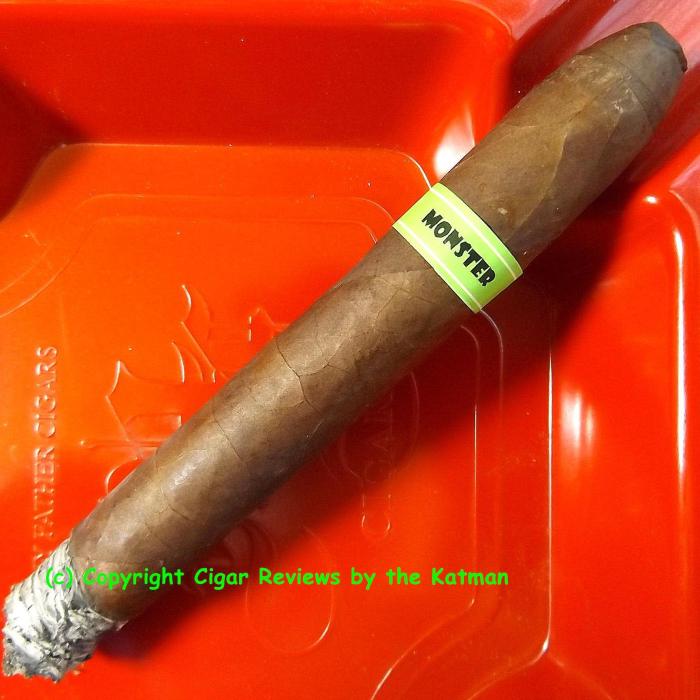 No transitions to speak of. How much is this cigar? $13.00! Holy shit!! Yesterday’s review of the Sublimes Cigar was 5 times as good as this honky donk. This pisses me off. The cigar has plenty of humidor time so no excuses. I need to check how Halfwheel.com rated it. Be back in a minute. Well, he gave it a 90. I won’t unless something drastic happens and soon.

So far, the Tatuaje Monster Series #8 The Hyde is a disappointment. One of my favorite blenders, Pepin Garcia, has let me down. For $13 clams, this cigar should have exploded in my face from the get go and just gone uphill from there. Instead, it did explode and then it lay there like my first wife on our honeymoon. Flaccid…lackluster, lifeless, listless, uninspiring, unanimated, tame, dull, and vapid. Describes the first Mrs. Kohn and the Tatuaje Monster Series #8 The Hyde.

Strength has pulled back to medium body.

Having a relationship with Pete Johnson is tricky. He doesn’t fool around with B List reviewers like me. Just the Big Guys. And the Big Guys don’t want to lose that tightrope relationship. Now, I’m not saying they give him great reviews all the time but it is quite the coincidence.

I’m nearing the halfway point and the Tatuaje Monster Series #8 The Hyde is a DUD!
All of the flavors have flattened out. And remember. This is the first cigar of the day for me so no other cigars got in the way of the flavor profile of this blend.
I guess if you are a Tat fan, anything will do. But I can list a bunch of Tat blends that aren’t so enticing. All PR and no meat.

The example being that I had not heard of the Sublimes Cigar and it was a ball buster of a blend. No PR bullshit. High ratings from CA. And reasonably priced from $7-$9. Even cheaper if you shop around. Thanks to Brock’s comment, he found that on Egars.com, you can snag this cigar for around $4-$6. That’s insane. The Tatuaje Monster Series #8 The Hyde costs three times as much, is a limited run, and doesn’t have an iota of character the Sublimes Cigar does.

A plug formed and I had to drag the cigar awl out once again. I can feel it just below the cigar band. But now, the draw is spot on. That should not happen on a $13 cigar.
It helps the flavor profile immensely. The draw is wide open and now allows flavors to flow. WTF?
An explosion of flavors that should not have been suppressed due to a small plug.

Now that’s what I’m talking about. I can’t believe a small plug would deny me of all those flavors. What I think is that it is “Last third sweet spot” syndrome except it happened at the halfway point. The hard draw only occurred for about 5 minutes so that’s not it.

Maybe Halfwheel.com got their cigar a couple months before his review. Since the Tatuaje Monster Series #8 The Hyde was released in early October, the most humidor time available to it was 7-8 weeks. Which, still, should be enough time. After all, Pete Johnson is a New Breed blender and his sticks don’t ordinarily need months of humi time like so many blends.

The strength moves back to medium/full on its way to full bodied.
The char line becomes wavy.

There are a lot of rumors that some manufacturers color their wrappers. Look at the photo below. See where my mouth has been on the cap? There is discoloration. And I no longer use my teeth to hold the cigar like I did for the longest time. So what caused the discoloration? 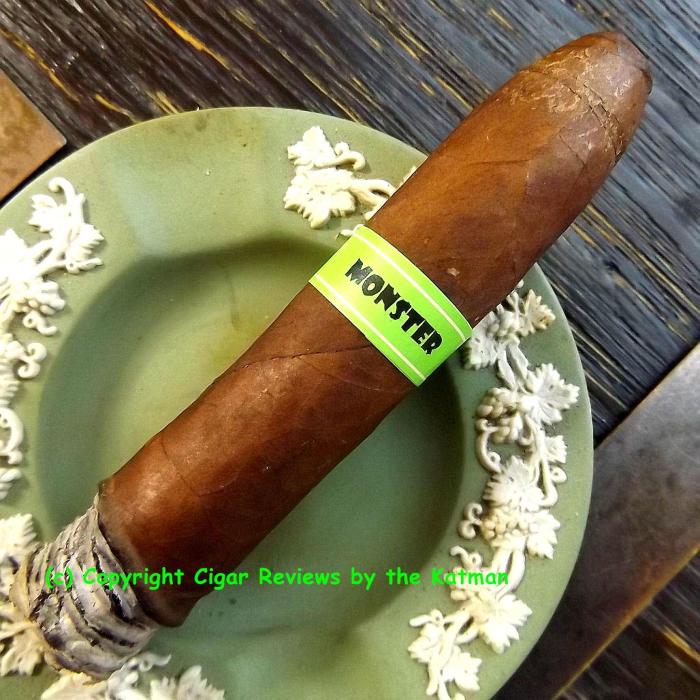 Strength hits full body. And nicotine shows itself. Drat.
The Tatuaje Monster Series #8 The Hyde has really hammered its sweet spot now.
I’m conflicted on how I shall rate this cigar. Its beginning was great. But the middle half t’weren’t so hot. And then just past the halfway point, it really kicks in.

Transitions are occurring. Complexity settles in. The balance is very good. And it has a luxurious finish. Smooth and creamy.
I can’t taste the mint so much unless I smack my lips like a dog.

Speaking of dogs, our boxer was the runt of the litter. She now weighs 75lbs. We feed her Blue Mountain Wilderness Salmon kibble. And I bake skinless, boneless chicken breasts to sprinkle on the kibble.
The dog is pure muscle now. No fat. And I don’t give her treats. Nor table scraps. Although, I do give in when I occasionally eat waffles. She loves her waffles.

The cigar plugs up again. I grab the awl. An open draw now and the flavors explode once again. Is it me? Am I nuts because of my Alzheimer’s? Could tar be plugging the cigar? I don’t puff hard. Beats the shit out of me.

LAST THIRD:
Smoke time is one hour 40 minutes.
The mint returns. Wow. It is really strong now without retrohaling.
But the creaminess is what drives the bus. I’m beginning to swoon a bit.

Not having a second or third cigar to compare the Tatuaje Monster Series #8 The Hyde with, I don’t know if this has been an aberration or just how the cigar is.
Being released in early October, this cigar is meant to be a Halloween blend. Ready to smoke by the 31st. I’ve nearly doubled that humidor time. 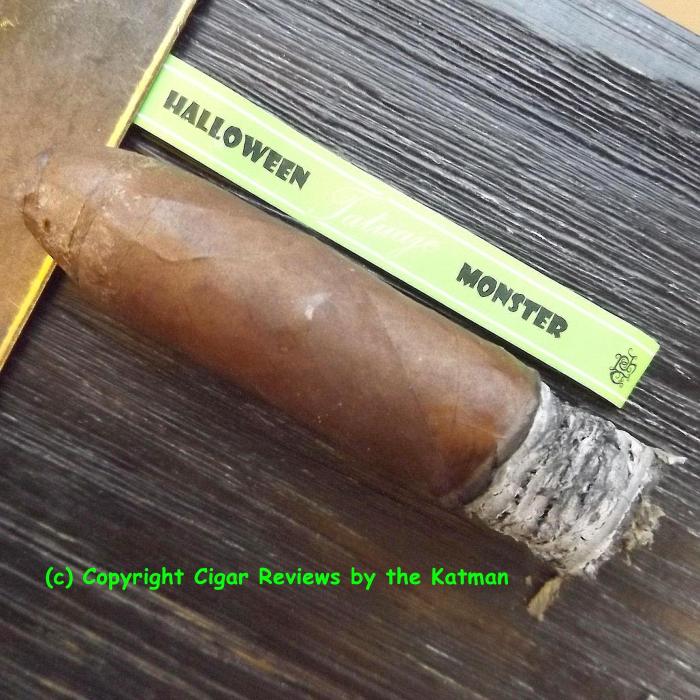 The inconsistency is going to affect my rating. When it’s good, it is very good. But when it is bad, it was very mediocre. I have to give the Tatuaje Monster Series #8 The Hyde the benefit of the doubt without other cigars for comparison.

There is no way this cigar is worth $13.00. Just no way. It is all about limited production and PR.
I keep using my cigar awl and each time I do, the flavor profile explodes. One shouldn’t have to do this.

The Rocky Patel Hamlet Tabaquero was a great cigar for only $8.80. The Nica Libre Silver 25th Anniversary Silver Torpedo was an excellent cigar for only $5.00. The Cohiba Nicaragua was worth the $14.00. The Dunbarton Tobacco & Trust Sobremesa Robusto Largo was really worth the $13.00. No comparison to this cigar. And lastly, the La Hoja Edición Crema 1962 No.1 Robusto was well worth the $11.00.

I depend on readers to supply me. But even so, I would buy an expensive cigar if it was worth it.
I’m guessing that there is too much filler in this cigar. That would explain the inconsistent flavor profile and the use of the cigar awl. This can’t be the norm.

Well, it’s up to you. Remember, check Halfwheel for the retailers. I’m guessing that all of them are selling the cigar for MSRP.
Famous Smoke is out. But Neptune Cigar has them on backorder. And the other 11 stores are all B & M’s with no online sales. S.O.L.
Final smoke time is one hour 55 minutes.