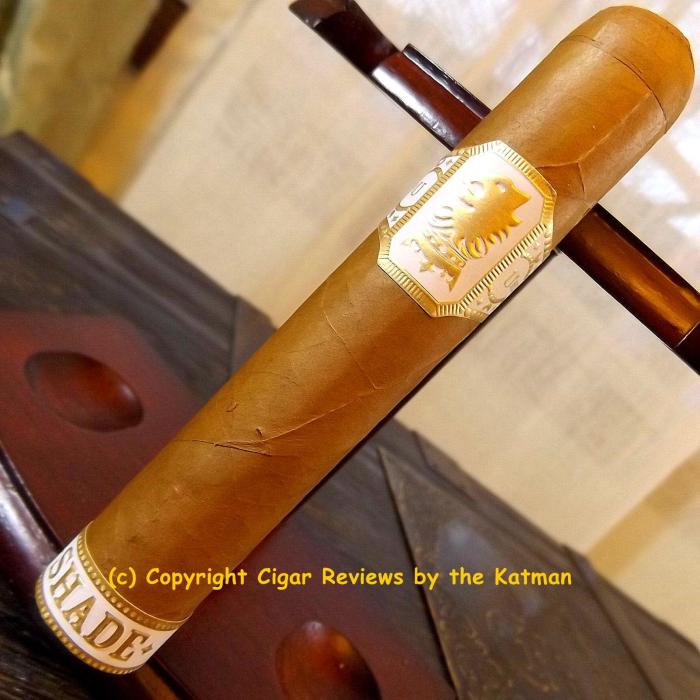 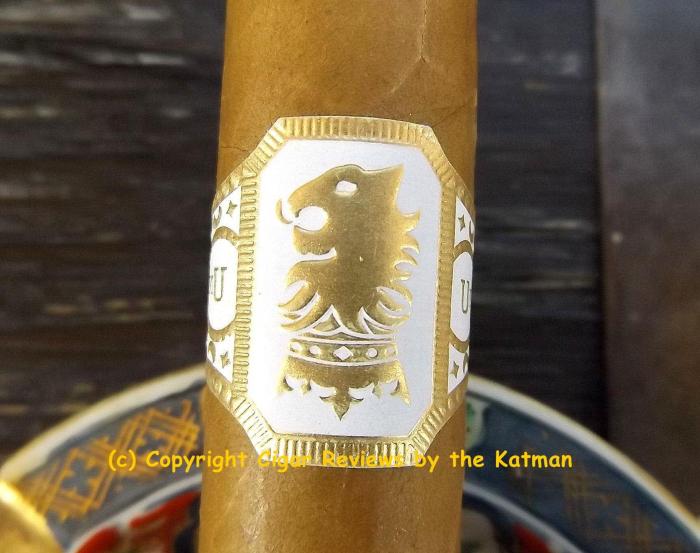 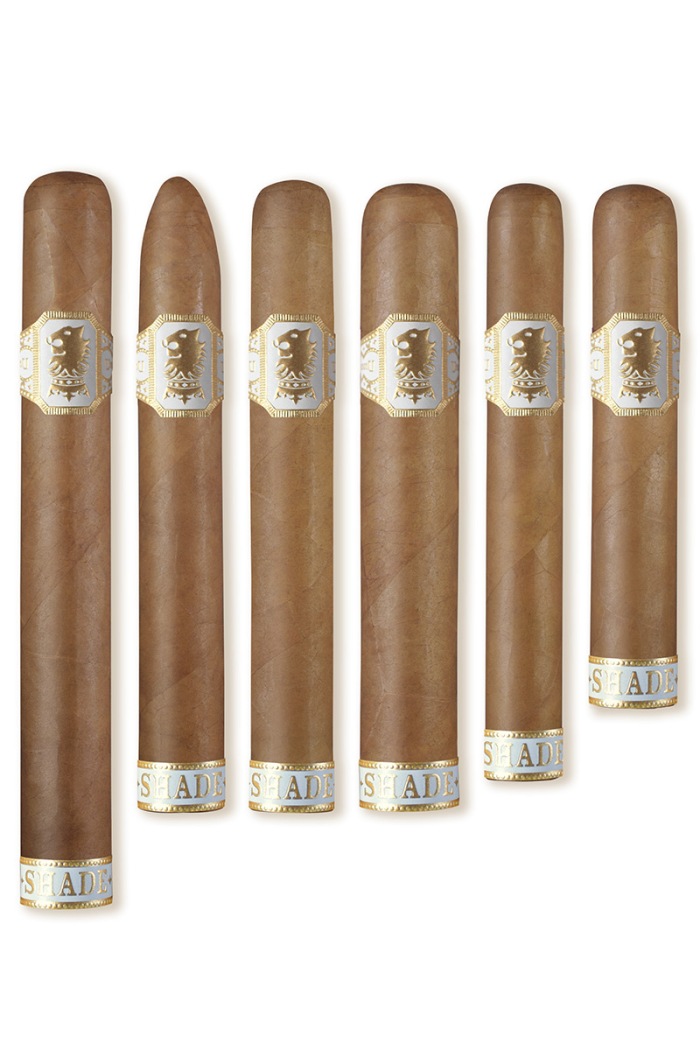 Above photo courtesy of Cigar Aficionado.

Today we take a look at the Drew Estate Undercrown Shade Robusto.
Thanks to Anonymous Stogie Pudding for the pair. Cigars…not his testicles. His wife owns those. Plus, I think he is older than me and this means I would need a steamer trunk to store them.

From the Drew Estate press release:
“Undercrown Shade marks the first release blended by Drew Estate Master Blender Willy Herrera not to fall under the Herrera Estelí brand family,” reads a July 13 press release. “The final blend is medium-bodied, lush, and ultra-smooth, flavors that only a shade-grown wrapper can deliver. And so it is with great bravado that we share Undercrown Shade, and the continuing story from our factory floor.”

DESCRIPTION:
Nice looking cigar. The wrapper is an oily, caramel color that is very smooth to the touch. Seams are nearly invisible. A modicum of veins. A nicely applied double cap.
This baby is solid, man. No soft spots.
Oh no. Not another cigar band that has a white background with gold lettering. Don’t these people know I can’t take a decent photo with these colors?
The cigar band is typical Undercrown except for the colors and there is a footer band that merely says: SHADE. 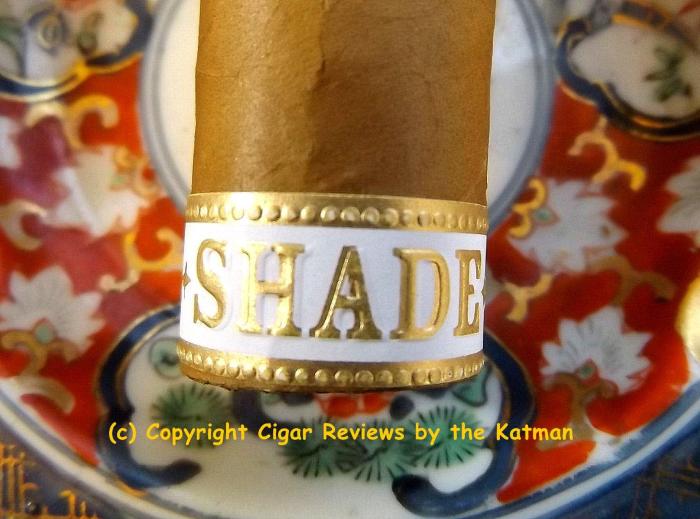 AROMAS AND COLD DRAW NOTES:
From the shaft, I smell cream, sweetness, vanilla, caramel, and cedar.
From the clipped cap and the foot, I smell loads of sweetness and vanilla, barnyard, milk chocolate, and cedar. In both cases, the sweet vanilla element reminds of Nabisco’s Nilla Wafers. As a kid, you could maybe get 2-3 down but after that if you don’t have a glass of milk handy, you choke to death on the driest cookies on the planet.
The cold draw presents flavors of sweetness, vanilla, earthy notes, milk chocolate, and cedar.

FIRST THIRD:
The draw is good.
First flavors are milk chocolate, creaminess, vanilla, spice, sweetness, caramel, nuts, and cedar. The Drew Estate Undercrown Shade Robusto is very pleasant. ASP sent me this cigar nearly two months ago. So, as it was a new cigar, I felt some humidor time would suit this blend nicely.
What a nice cigar blend. The strength is on the mild side of medium body but no matter…the flavors are potent and inviting. 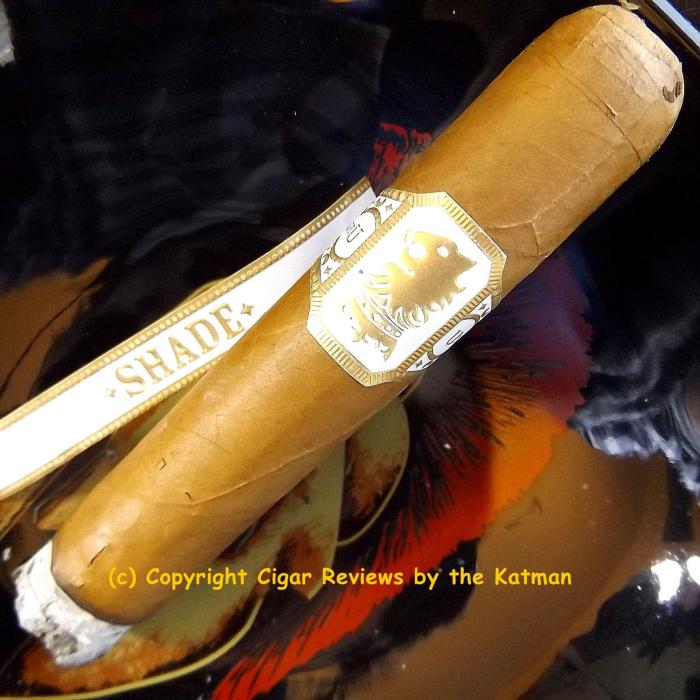 I look closely at my photos. I think I am wrong about the number of caps. It is at least a triple cap; and possibly a quadruple cap. The application of the cap is so flawless, that my aging eyes could not pick this up.
Construction is excellent. The char line is on the money.

SECOND THIRD:
Smoke time is 20 minutes.
Anyway, back to the Drew Estate Undercrown Shade Robusto. I am truly enjoying it. The creamy vanilla cookie element is wonderful made even better with a hint of red pepper. The creaminess, milk chocolate, sweetness, and caramel are the icing. New flavor: Peanuts. 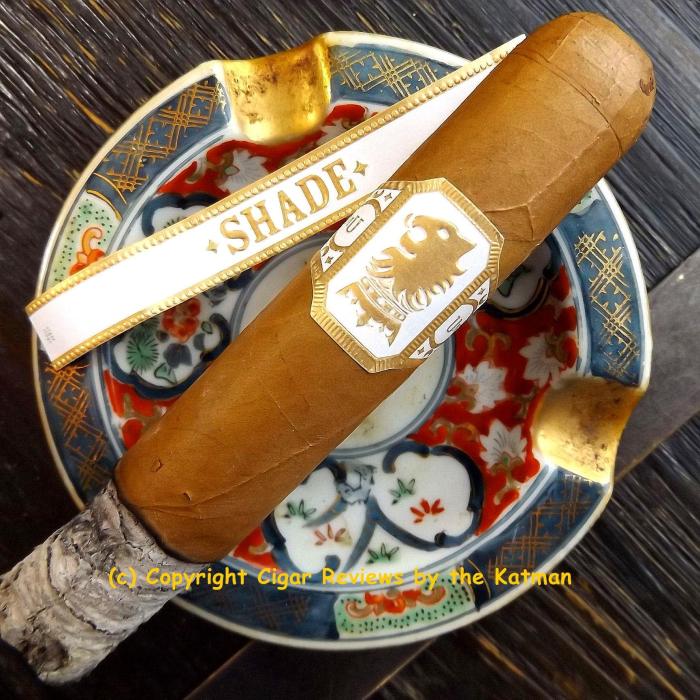 This is not a complex blend. Balance is good as well as the long finish topping it off.
Strength is a solid medium body now.
I checked Cbid and only found Belicosos and Gran Toros. All going for much cheaper than CI’s retail price. But no robusto.

I hit the halfway point and not a lot of transitions happening. A very pleasant smoke whose price point seems to be in the right ballpark.
Smoke time is 30 minutes. 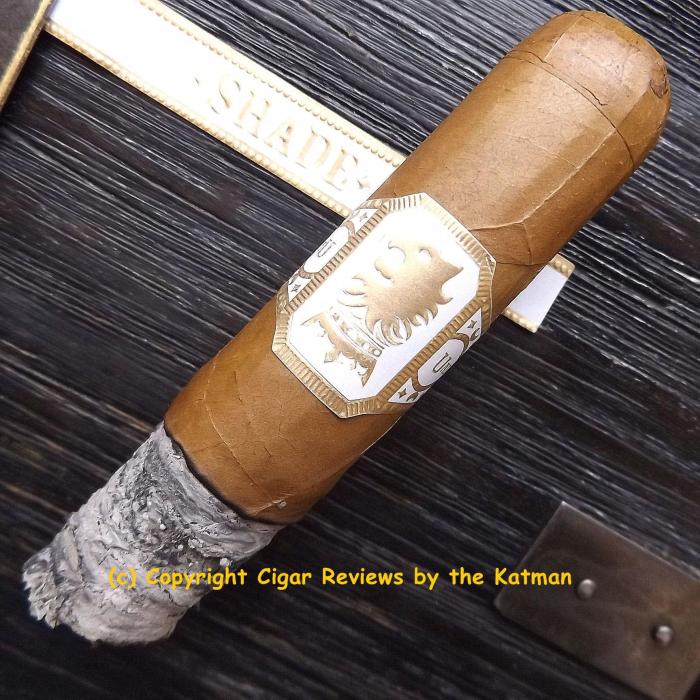 More new flavors: a berry fruit, hot cinnamon, raisins, and graham cracker.
Yet, no substantial complexity. I’m not saying I don’t like the Drew Estate Undercrown Shade Robusto. I just expected more oomph. I know, I know…it’s advertised as a mild/medium bodied blend and you can only expect so much. (I’m sure I will get someone leaving a comment telling me I’m full of shit.)
The number of transitions certainly help. But this has more in common with a Macanudo than the other DE blends. If you want a great Connecticut cigar, try the My Father Connecticut. That’s a killer blend. Or the New World Connecticut by AJ Fernandez. Check out my reviews. Both blends have real zip and oomph.

The Drew Estate Undercrown Shade Robusto is just another $6.00 cigar. Nice points here and there but nothing unusual. And I realize an important factor to any good cigar is missing: Malts. 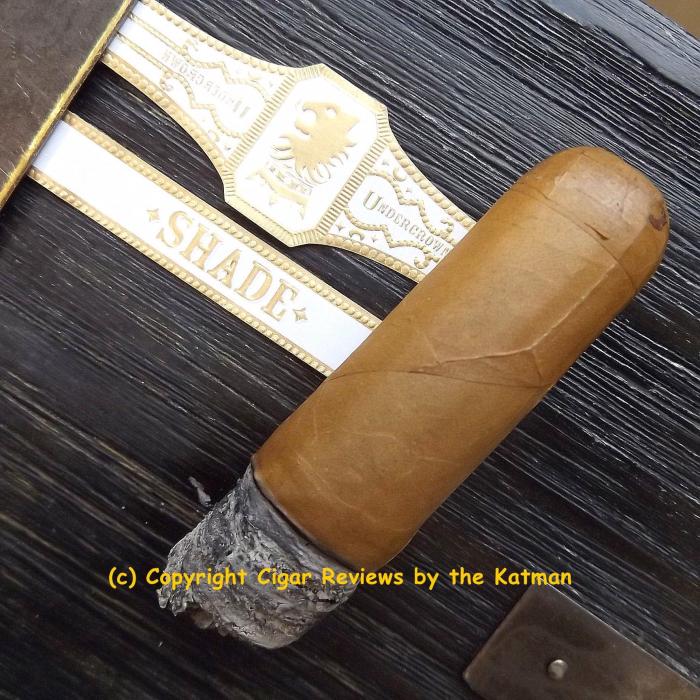 Due to the lack of complexity, the Drew Estate Undercrown Shade Robusto seems to be lumbering along. If this is all it haves to give as the first cigar of the day, I guess it will have a lot less to give after a few cigars during your smoking day.
I am impressed with the construction. And the burn line has been more than decent.

LAST THIRD:
Smoke time is 45 minutes.
Other reviews fawn over this blend in a similar way I do when I get to review a great cigar. So what am I missing here? Did they let the cigar age longer than me? I would think two months is plenty of time. But I could be wrong.

Ratings are all over the place from 80 to 93. And one of the Big Guy reviewers felt the cigar needed more humidor time than he allowed and decided not to rate it. Meaning, he must have felt the same way I do about the cigar. So maybe, two months humidor time is insufficient. But I doubt it. 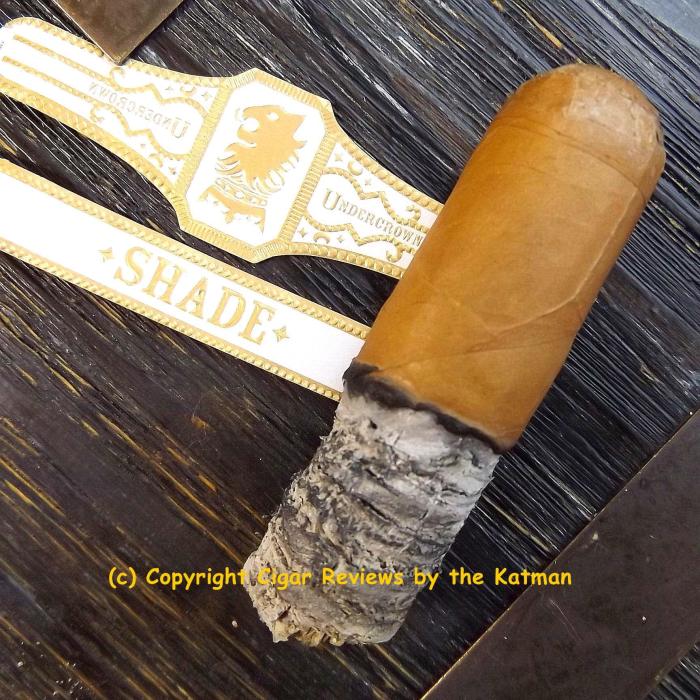 I’m conflicted. Sure, I enjoyed most of the cigar. But being pleasant doesn’t make it deserve a 90 or 93. I did notice that some reviewers got the chance to smoke different sizes prior to their review and had definitive preferences. The Gran Toro seemed to be the favorite. Maybe size does matter…regardless of what your wife tells you.

With 1-1/2” to go, the sweet spot kicks in. Finally. Flavors surge. The strength moves to medium/full body. The spice returns. This tells me one of two things: First, the Drew Estate Undercrown Shade Robusto needs much more than two months humidor time; And second, this is your typical inexpensive blend in which it doesn’t come to life until the last third. I’m flummoxed. I feel like the reviewer who said he needs to come back to the cigar at a later date and try again. I feel the same way. I wish more reviewers would state how long they allowed their cigar to humidor rest. Not only would it help understand the review but help the reader, as well. I’m always getting emails asking me how long should a certain cigar stay in their humidors before lighting up.

The construction deserves a 92 rating. The flavors of creaminess, vanilla, caramel, cinnamon, and caramel sweetness drive the bus on this blend. I give credit to DE on pushing the envelope of producing a cigar that seems to be out of their comfort zone.

I’d wait to check Cbid before buying this cigar. It appears you just might pay half price.
The Drew Estate Undercrown Shade Robusto ends very cool to the touch without a hint of harshness, bitterness, or nicotine. I like that a lot. 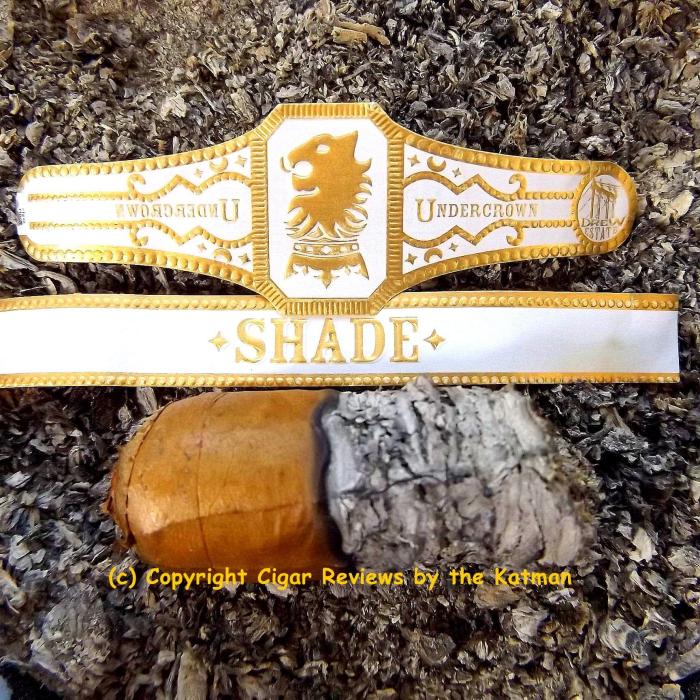