Today we take a look at the Diamond Crown Julius Caeser.
Many thanks to Drew Newman of J.C. Newman for the samples.
And a big surprise soon. Drew also sent me samples of the yet to be released Diamond Crown Black which will be released in 2016.
Due to the short length, I shall review it in halves instead of thirds.

BACKGROUND:
Factory: Tabacalera A. Fuente y Cia
Debuted at the 2009 IPCPR trade show but not released until 2010.
The tobacco is aged a minimum of 5 years.

JC’s likeness is on the cigar band with that Roman garb. And JC has that Hungarian nose. Just like me. My dad was Hungarian. My Grandfather always called himself a Hunky. (What? No Dory?)

From the J.C. Newman web site:
“Diamond Crown JULIUS CAESER honors Julius Caeser (“J.C.”) Newman, a true cigar pioneer and founder of the J.C. Newman Cigar Company. Born in a small Hungarian village, J.C. and his family sailed across the Atlantic in 1888 in search of the American Dream.

“In 2010 we created a Diamond Crown that honors J.C., whose likeness appears on the cigar label. Diamond Crown JULIUS CAESER cigars are meticulously rolled by hand in small batches by Tabacalera A. Fuente in the Dominican Republic. Flavorful Ecuadorian Havana-seed wrappers, combined with a robust blend of Central American tobaccos, are aged for five years to give JULIUS CAESER its bold, rich distinctive flavor.”

Cigar Aficionado gave the Diamond Crown Julius Caeser a 93-rating: “Lots of rich, coffee-laden smoke layers the palate with each puff. The bold coffee is balanced by sweet and spicy woody flavors and a savory finish.”

From the Cigar Aficionado web site:
“It was 1895 when Hungarian émigré Julius C. Newman founded a cigar company in his family’s barn in Cleveland. Today his grandsons Eric and Bobby run what he began, making J.C. Newman one of the oldest cigar companies around. The family business moved long ago from Cleveland to Tampa, Florida, and J.C. Newman still makes its own machine-made cigars, but its handmade cigar brands are now all made offshore. The Diamond Crown Julius Caeser brand is made for the Newmans by their longtime partners the Fuentes, and the cigar brand is named after the founder of the company, a strong-willed man who took the middle name Caeser when he came to America and was told he needed a middle name.”
And the cigar came in at #14 on Cigar Aficionado’s “The 25 Best Cigars of 2014” list.

DESCRIPTION:
Nice looking stick. But for $11.25-$18.00, it should look as good as a stripper’s pole.
The wrapper is super oily. The color is a dark coffee bean brown. The wrapper feels very toothy in places and very smooth in others.

Seams are invisible. The triple cap is totally hidden. The stick is solid without a single soft spot and feels nicely filled.
The cigar band is lavish. The original Julius Ceaser is donned like the real Julius Ceasar. He looks like my grandfather. There are three gold coins, that I’m sure represent awards, on each side of the cameo.

FIRST HALF:
The draw is very nice.
Right out of the gate, the Diamond Crown Julius Caeser is uber delicious and eclectic.
The flavors: Chocolate, spice, creaminess, honey, citrus, malts, coffee, green tea, cedar, and a rich, earthy tobacco element.

The Diamond Crown Julius Caeser has an immediate high premium quality to it. First, it starts with a bang. No waiting for the last third to see it blossom. And second, the flavors are rich, subtle, and nuanced with the early stages of complexity amping up the whole cigar experience.
Strength is medium+.

I gotta’ be honest. If I hadn’t gotten this wonderful start to the Diamond Crown Julius Caeser, I would have been highly critical. While some reviewers don’t take price point into consideration; I do. And for good reason.

No. An immediate sophistication is required for this price range. And, so far, the Diamond Crown Julius Caeser has delivered the goods.

Half an inch in, the blend gets its complexity. A nice, developing balance. And a long finish that is just plain delicious. As a reviewer, I get a lot of my taste from the finish. I don’t retrohale any longer. Too old for that. Did it for so long that my sinuses and nasal passages are focakte. And I’m tired of dragging a bottle of Ocean with me everywhere I go. And my conjecture is that most cigar smokers don’t retrohale. It is difficult to do and unless you are a natural or someone shows you how to do it, it becomes something that is never quite grasped. Some reviewers write for the retrohalers. I don’t. 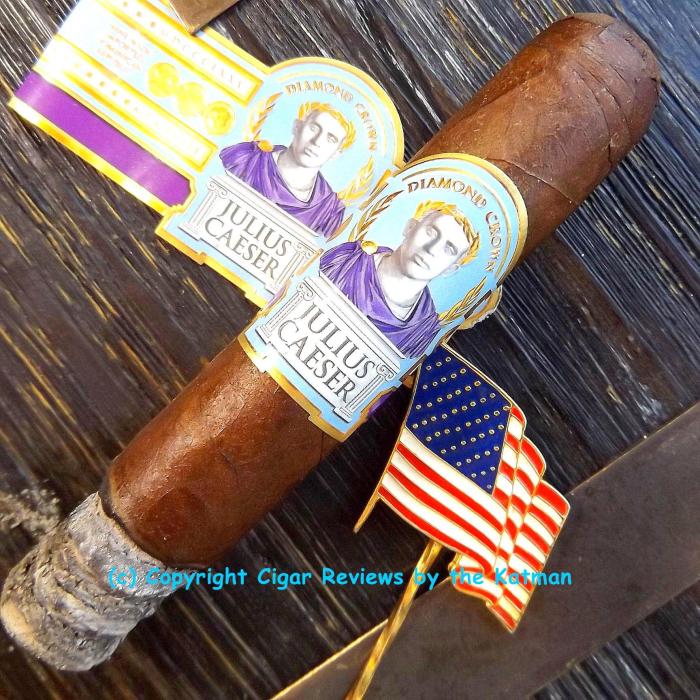 I love this blend. The flavor elements seem to work best in pairs: Spice and citrus, creaminess and chocolate, honey and green tea, malt and cedar, and lastly; coffee and a subtle floral note. And like the cheese, the smokiness stands alone.

The Diamond Crown Julius Caeser is not a kitchen sink flavor profile. But ancillary flavors are so delicate and gentle that I have been unable to put my finger on them so I cannot definitively name them…at least, not yet.

1-1/4” is burned and left on the steps of the Hungarian State Opera House.

Transitions are super important for a great cigar. Without them, you have a one trick pony.
Transitions on the Diamond Crown Julius Caeser have come fast and furious.

For only a 4.75” long cigar, it seems to be burning very slow…at the rate of a Robusto Grande.
Time to list the malts but before I do, I got an email from Kenneth Pope asking me how I knew the difference in beer malts and how they pertain to cigars.

I have a lifelong, cigar smoking friend that owns a microbrewery in So Cal. Quite a while back, he took the time to explain all the different malt incarnations and how they fit into the cigar’s flavor profile. He turned me on to the Malt Flavor Chart. And I have a journal’s worth of notes that he gave me. So that’s how.

A few new flavors that have been hanging back: Toffee, raisins, roasted nuts, and wheat.
Man, this is a good cigar blend. It is going to be a killing machine with a couple months of humi time.
Vanilla shows up. Really intense. Like vanilla salt water taffy. I can still remember. Back in the day growing up in Long Beach, CA, we had the Nu-Pike amusement park at the ocean’s edge. It had the largest roller coaster in America back in the 1920’s. It’s been long torn down and gentrified. Hung out there all the time as a teen in the 1960’s. There was a man who had this large cart with that cool machine that made all flavors of salt water taffy. I can still taste the vanilla, my fave, as I write this. You got a big bag of them for 25¢. Yeah, I’m that old.

Construction, and the char line, has been impeccable.

SECOND HALF:
Smoke time is 40 minutes.
Now that’s getting bang for your buck. I was afraid this might be a quick review. Most cigars this size burn a lot quicker than this baby.
Strength reaches medium/full.

The Diamond Crown Julius Caeser is so smooth that an inexperienced smoker could confuse this for a mild bodied cigar. I read a couple reviews and they said the cigar was too mild for them. LOL.
Bam! A massive surge of flavor occurs. Just like that. Turning a light switch on.

The Diamond Crown Julius Caeser is now a major flavor bomb. Damn. I wasn’t expecting that.
The creaminess, malts and chocolate are driving the bus now.
Huzzah! The spiciness has returned in spades.

This is why it is fun to review a cigar in real time. Smoke it and write it simultaneously.
You also get to see me make an ass of myself. Because…I don’t edit. First draft goes to the publisher save Spell Check. Always been that way.

Damn. One helluva’ delicious blend. A fine tribute to Mr. Ceaser.
Like most Ashton products, lots of humidor time is needed. Clearly, Drew slipped some nicely aged samples on me.

I want to say something here. The great majority of manufacturers are arrogant as hell. They consider the reviewer an evil necessity and we are treated as such. Sort of how like the old time movie directors considered their actors.

Drew Newman was super polite from the start. A real gentleman. Usually, if I get an email from a manufacturer, it’s to yell at me for not getting the review right. Or take issue with my honesty. They don’t get it. I don’t review cigars for the pleasure of the manufacturer. I write for you. And me…of course.

In other words, I’m very happy I could give Drew a rave review of the Diamond Crown Julius Caeser samples he sent me. I can’t count how many times manufacturers have sent me samples and I’ve been forced to write them back telling them they really don’t want me to write the review. A terrible blend. I’m sometimes amazed at the delusional manufacturers that think their cigar blends are top drawer. And in reality, they are just the opposite.

The Diamond Crown Julius Caeser is a major treat.

Now, let’s talk about price. Instead of this cigar costing the MSRP of $11.25, most online cigars charge around $10.00. On Cbid, they are going for around $8-$9. For this blend, that’s a great price. Cbid has a Diamond Crown Family Toro Collection that is 4 cigars and is going for $31. It includes one Diamond Crown Julius Caeser. So the point of this is to get you to do your research if you are wallet conscious.

The bottom line is that this is sort of a commemorative blend. I tell you this..there is no way in hell I can afford any of the sizes in the $16.00 and up prices. But many of you can and God bless you.
But at around $10 or less, you can snatch a little bit of heaven with the purchase of the Robusto and still get that bevy of wonderful flavors and sophistication.

Thanks to the packed-to-the-gills filler, this will be an hour smoke; or more.
Now I have to show some patience. I have the pre-release review of the Diamond Crown Black to do and I can’t wait. This is one gorgeous cigar.

This has been an enjoyable experience. I cannot thank Drew Newman enough for contacting me and sending me samples of the Diamond Crown Julius Caeser.
I highly recommend the cigar.

Final note: A special thank you to reader/friend Charles Lim.