Today we take a look at the re-released La Flor Dominicana Coronado 2015. It was originally called Coronado by La Flor. (See below)
Thanks to Eric Anderson for the cigars.

BACKGROUND:
I haven’t reviewed this blend in even the original format on this web site. I did review it on my old blog: Katmancross Cigar Reviews. I had thousands of reviews and it was hosted by Open Salon and since their makeover, my reviews have all disappeared. So this is like starting from scratch.

From the Cigar Aficionado web site:
“One of Litto Gomez’s finest blends is returning to smoke shops later this year. Coronado by La Flor, which has been off the market for approximately 18 months, will be brought back to the La Flor booth at the International Premium Cigar & Pipe Retailers trade show next month under a new name.
“We’re going to bring back the Coronado line,” Gomez told Cigar Insider.

“The cigar has been renamed La Flor Dominicana Coronado, but the blend remains unchanged. The distinctive component of the cigar is its sun-grown, Habano-seed wrapper, grown in the Jalapa Valley of Nicaragua by the Plasencia family. That oily leaf cloaks a selection of Gomez’s powerful Dominican tobaccos. “I just love the blend,” said Gomez.

“Coronado by La Flor was a critical success, and the Double Corona scored 93 points and was named No. 2 cigar of 2006 by Cigar Aficionado magazine. The 7 inch long, 50 ring gauge smoke was called “rich, complex and decadent…with ample notes of caramel and leather on the palate.” It was the highest position one of Gomez’s smokes has achieved to date on the Top 25 list.

“But sales were not as impressive as Gomez hoped they should have been, as the Coronado was not necessarily viewed as part of the main La Flor Dominicana brand. It existed in a sort of limbo where La Flor smokers didn’t know it was part of the La Flor family. It was also never marketed heavily.

DESCRIPTION:
Both sticks are rustic looking upon close examination. Seams aren’t tight. Lots of small and big veins. Ripples, bumps, lumps, sloppy workmanship overall. The triple cap is fine. The wrapper is a semi-oily russet brown with a reddish tint color.
The wrapper has a fine amount of toothiness. While the other cigar is very smooth.
LFD changed the cigar band completely. Very simple band with only the LFD and the small word: CORONADO.

AROMAS AND COLD DRAW NOTES:
From the shaft, I smell manure, honey sweetness, spice, a lovely and strong floral note, chocolate, espresso, and cedar. That manure aroma seeps into the other aromas.
From the clipped cap and the foot, I smell dark chocolate, spice, coffee, sweetness, and barnyard.
The cold draw presents flavors of strong tobacco, spice, chocolate, and a bit of sweetness.

FIRST THIRD:
First puffs are very chocolaty. With a heavy dose of cream.
Moments later, I am walloped with a big slug in the puss of red hot pepper. My nose twitches and out fall Krugerrands.

I’m finding the most generally used type of lighting a cigar is much better than what I was proselytizing before. Now I just light the foot while rotating the cigar. And then I give it one last blast into the center of the foot. I think the trick is to put it down for a few minutes instead of puffing on it immediately. I believe this gives the cigar to get some stability of its char line before beginning. Hell. I don’t know. I’m spitballin’ here. But since I went back to this simple method, the percentage of cigars with runs has decreased enormously.

There…typing that was just the right amount of time to allow the cigar to rest after lighting it.
Wow. The La Flor Dominicana Coronado 2015 is really, really good. I sound like I’m in elementary school, dude. 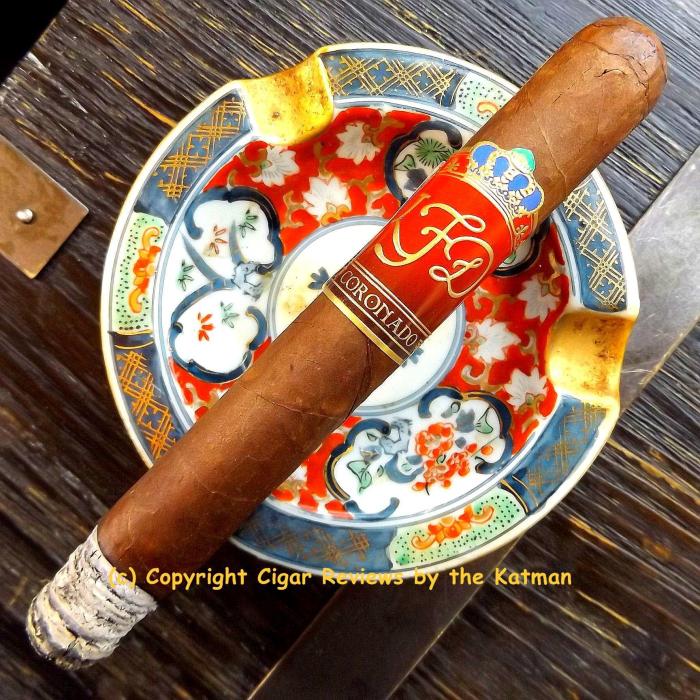 It is already complex with a quarter inch burned. Yikes. This is going to be a great cigar experience. I’ve said all along that if a blend doesn’t start this way from the first puffs, it ain’t worth your money or time.

There are wonderful flavors at play: Creaminess, red pepper, a very strong meatiness, teriyaki seasoning, chocolate, coffee, honeysuckle, roasted nuts, toasty, caramel, cedar, salty, fruity, and steak sauce. But it’s more Heinz 57 steak sauce than any other brand whose ingredients are: raisin puree, malt vinegar, apple juice concentrate, and mustard. Yeah, that’s the ticket.
Lawdy, lawdy, Miss Clawdy. Damn. The baby Jesus has imbued this cigar blend with miraculous flavors that work together like a Swiss watch. (I went to the same kindergarten as the baby Jesus so we are tight).

And the malts file in: Crystal/Caramel Malt, Chocolate Malt, Flaked Rye Malt, and Golden Promise Malt. (See Malt Chart).
I’m duly impressed. I don’t believe that LFD didn’t tweak this blend. I don’t remember the Coronado tasting anything like this. Especially having such a short humidor time.

The tobacco has just gotten better than when this cigar was popular in 2006. If the original Coronado got a 93 from CA, Lord knows what it will get this time. (I have never known that in this context, the word “lord” should be capitalized or not. So as to preclude the chances of a pipe bomb left at my door, I capitalized it.)
Construction is top notch. The char line is beautiful. Dead nuts perfect.

SECOND THIRD:
Smoke time is 25 minutes.
A nice complex blend with a bushel full of flavor. My kind of cigar. But methinks that this size is the perfect conveyance for the flavor profile.

I can’t recollect what the original Coronado price was. But I’m sure it wasn’t $9 for a corona.
That being said, I do believe they futzed around with the blend. And second, they made this a blend that stands out amongst the crowd of other $9 blends.

The steak sauce has moved up the lifeline of flavors. The spiciness is still cranking. The creaminess, chocolate, coffee, and caramel make for a great foursome.
The nuttiness and toastiness are the cherry on top. The honeysuckle has disappeared. Like my penis after a cold shower. (That happened recently. I was happy as a pig in a blanket, when the water turned ice cold for about 30 seconds. You can jump out of your skin.)
For such a small cigar, it is taking its time.

I check the online stores and a lot of them still carry the old blend with the old cigar band. I also found several stores carrying the 2015 blend. And they all seem to be selling them at just under $8.00 at box price. But MSRP at single price.

The usual discount stores don’t carry them at all. Not boutique enough I guess.
I run into a rolling imperfection that screws up the char line. Bad roller! No treats for you. The imperfection also causes a small crack that I hope I can burn right through.

I read a couple other reviews and I gotta tell you. They didn’t experience 1/3 the flavors I do. Go figure. And these are the Big Guys I’m talking about. Halfwheel.com said he tasted chalk. I don’t taste that. What the hell does chalk taste like. I’m not going to Walmart and buying a box of chalk so I can recognize it. I ain’t licking no chalk. I can just drink Maalox.
The cigar band is removed easily. And there is a major crack beneath it.
I’m at the halfway point. Smoke time is 40 minutes.

In the blink of an eye, the entire cigar experience has changed. The damn cigar is falling apart on me.
Wow. Color me disappointed. Was the crack there all the time and the cigar band covered it? Or did it develop in shipping in this frigid weather? Who knows? But the rolling imperfection just below it might have something to do with it. I only have one left but I’m not starting over again.

This is what happens in real world reviewing. Shit happens.

The crack forces the wrapper to come loose on both sides of the crack. But it is glue-able. It’s like I’m putting the whole cigar back together.
Did I get a clunker? Are they all like this? I did smoke one as Eric sent me three sticks and I had no such trouble with that first one. So Murphy’s Law strikes.

I will give the La Flor Dominicana Coronado 2015 the benefit of the doubt when rating it.
Fortunately, the construction issue happens on one side only so I don’t have to continue to take photos of a focakte wrapper.
But it did take me off point.

The flavors aren’t affected. I’m just bummed that I had to deal with this during a review.
Watch. The last cigar I smoke will have zero construction issues.

LAST THIRD:
Smoke time is 55 minutes.
The La Flor Dominicana Coronado 2015 is on a mission to make my palate explode.

BTW- The name of the cigar does not have a 2015 in it. Technically, it is called the La Flor Dominicana Coronado. This differentiates it from the original name: Coronado by La Flor. But so many reviews misnamed the blend that in order not to fall into a long list of 2007 reviews, I have chosen to add the year to make it stand out.

I did a good job with the glue and it seems welded shut.
Strength is full body. 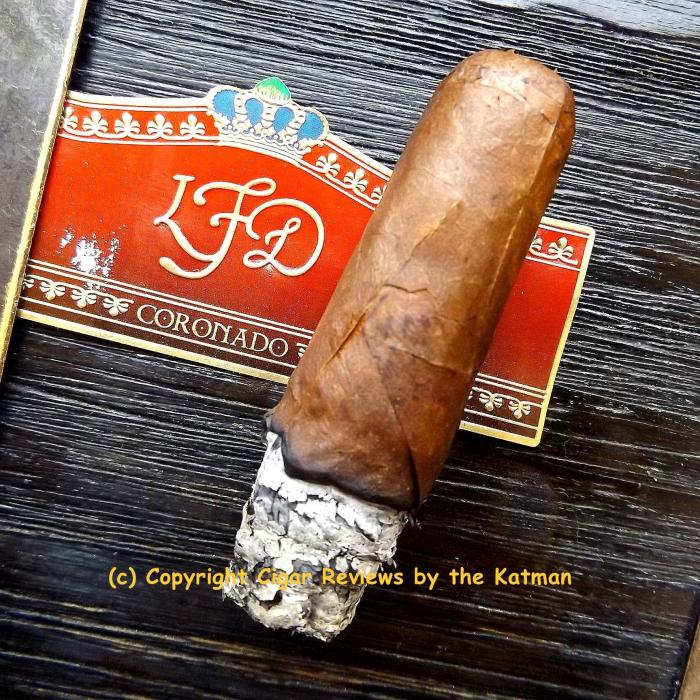 I would have rated the blend higher if not for the construction issues. I think my rating is fair.
I might say that if I gave the cigar some really extended humidor time, this wouldn’t have happened.

But that crack beneath the cigar band was there and no big of aging would have healed it.
The wrapper is now developing some little cracks around the circumference of the cigar.
I believe the cold air did this. The cigar had to travel from one cold region to another. And while the cigars were delivered in 3 days, those 3 days suffered frigid weather.

I still highly recommend this cigar. The flavors are terrific. The complexity is something else. But it’s frustrating having to deal with construction issues while you are trying to convey the brilliance of a blend.

The La Flor Dominicana Coronado 2015 is an excellent cigar. I cross my fingers that my other cigars slated for review don’t suffer the same fate.