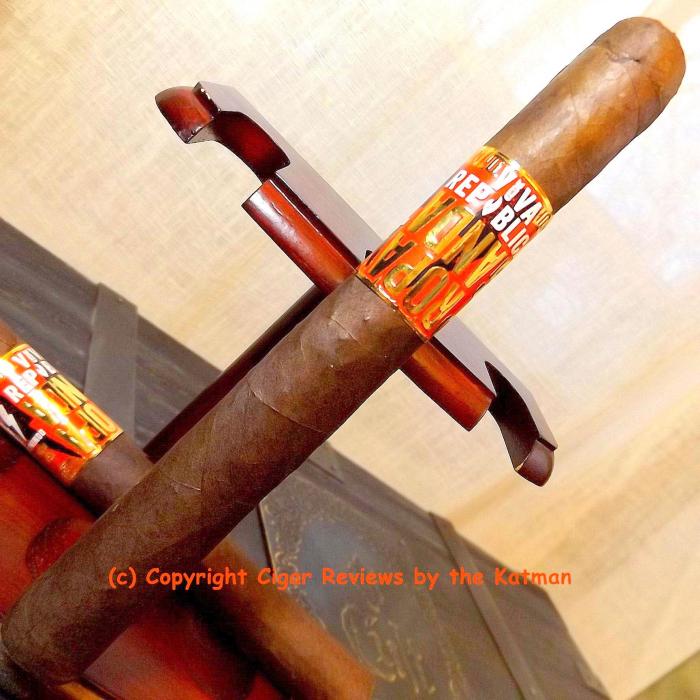 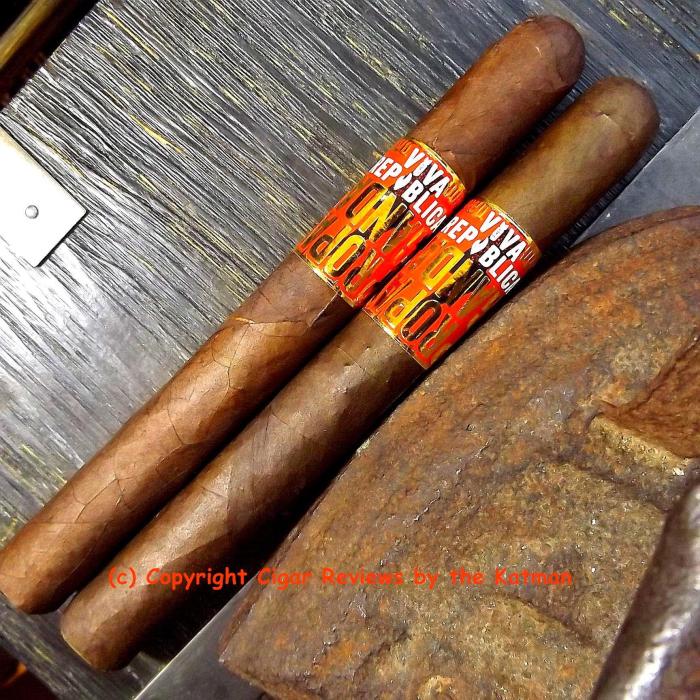 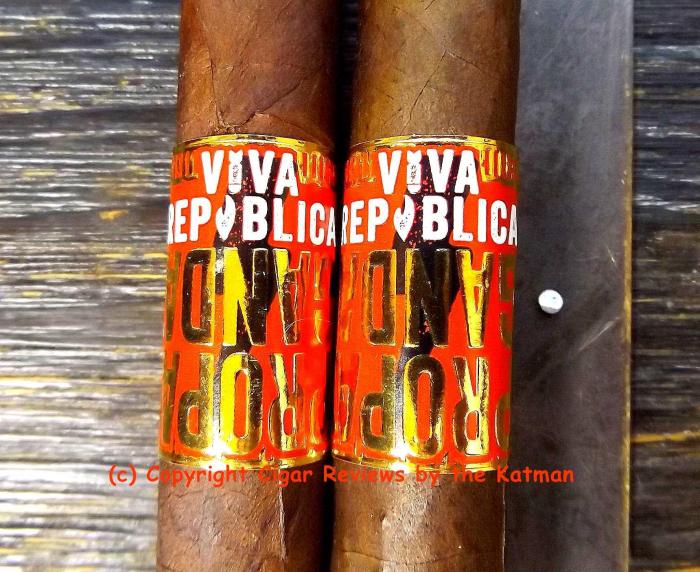 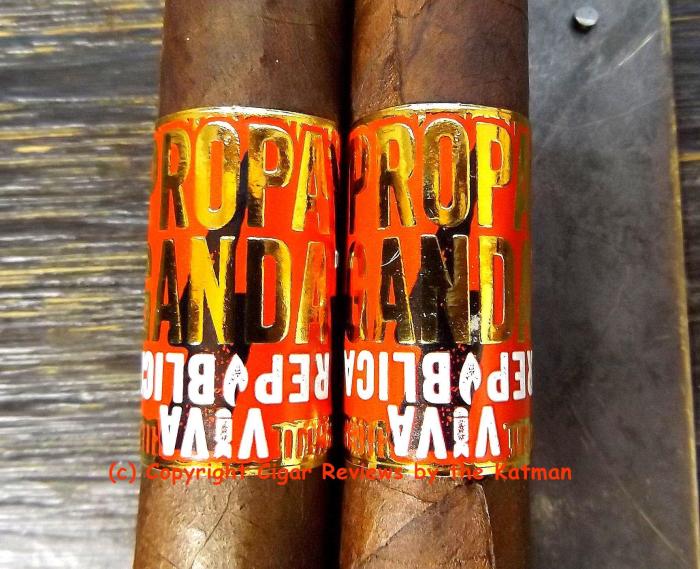 The above photo is courtesy of Halfwheel.com

Today we take a look at the Viva Republica Propaganda.
Thanks to Charles Lim for the cigars.

“Viva Republica owner Jason Holly did indicate there was quite a bit of Ligero contained in the blend.” According to Halfwheel.com.
This is the third release from Viva Republica. The first being Rapture (Natural and Maduro) and the second being the Jailbreak.

From the Viva Republica web site:
“When we sought out to find a tabacalera to work with — never did we dream that we would have the opportunity to work hand-in-hand with a factory as prestigious and resourceful as La Aurora. In forming our relationship with Guillermo Leon we came to find out that his word is his bond, his knowledge is humbling and his personality is infectious. In fact, “working” with him is not work at all — it’s sharing a passion and a common desire to create products that please the consumer.

“Guillermo Leon is one of the most respected cigar makers in the World – his integrity and vision are unparalleled — and it certainly doesn’t hurt that his family has been producing cigars for over 109 years. With his support and guidance, coupled with the massive resources of his impressive factory, we have been able to fast-track projects and focus our efforts on crafting hundreds of prototypes of cigars, geared to appeal to today’s aficionados.”

DESCRIPTION:
The Viva Republica Propaganda is a good looking rustic leaning cigar. Big and lumbering. A gorgeous,, mottled, super oily, dark chocolate brown wrapper. Not as many veins as one would think but there are some big muscle veins.

Seams are tight. The wrapper is very toothy. A flawless triple cap. The stick is so solidly packed, that it is very hard to the touch.

The cigar band is clever…I think. The background color is fire engine red with the words: “Viva Republica” in white and then it gets weird. Upside down is the word: PROPA GANDA broken into two words to make it fit with the huge font. Those letters are a shiny gold. This is a nightmare for my photographic skills. New smart phones take better pics than my Fuji digital camera.

SIZES AND PRICING:
Disinformation 4 x 54 $7.50 MSRP
Five and a Half Truth 5.5 x 54 $8.25 MSRP
Big Lie 6 x 58 $9.00 MSRP
Bandwagon 7 x 50 $8.75 MSRP (This size was added after all the press releases were published and even some reviewers that got early samples weren’t made aware of this newer size. So thanks Charles for keeping me ahead of the pack. Although, this behemoth cigar is going to be a 2+ hour smoke. But what else do I have to do? LOL.)

AROMAS AND COLD DRAW NOTES:
From the shaft, I smell sweetness, honeysuckle, spice, cream, strong bitter chocolate, cedar, and coffee.
If you really want to get the most from your sniffing experience, this is what I do. I put the cigar, lengthwise, across the top of my lip underneath my nose. Then I push the cigar upwards so that is sort of spreads and opens my nostrils. Almost like the effect you get from those Breathe Right Nasal Strips. You actually get about 3 times the aromas made available to you.

FIRST THIRD:
Charles sent me two so I haven’t tried one yet. Gotta have a backup. You’d be surprised how many manufacturers will send you only one stick. You have to guess as to when it will be ready to smoke.
I’m killing time while I allow the cigar to rest after lighting it.

Grand news!! I was contacted yesterday, by phone, from Drew Estate.
I was asked if they could send me some sticks and put me on the DE reviewer’s list. “Hell yeah!” So after begging for years to get on that list, one simple call and I’m on the list. I think it has something to do with my review of Steve Saka’s Dunbarton Tobacco & Trust Sobremesa. Either they read it independently. Or Steve contacted DE and said “Look at this guy.” I sent Steve a thank you note.

OK. The Viva Republica Propaganda.
It opens with a blast of red pepper. A spice bomb! Loads of dark chocolate follows.
Even with a few minutes rest in the ashtray to allow the burn line to cool a bit, I still get a small wavy line that I nip in the bud.
The flavors: Spice, dark cocoa, creaminess, sweet marzipan, cinnamon, nougat, herbal notes, black licorice, oak, vanilla, and mesquite. 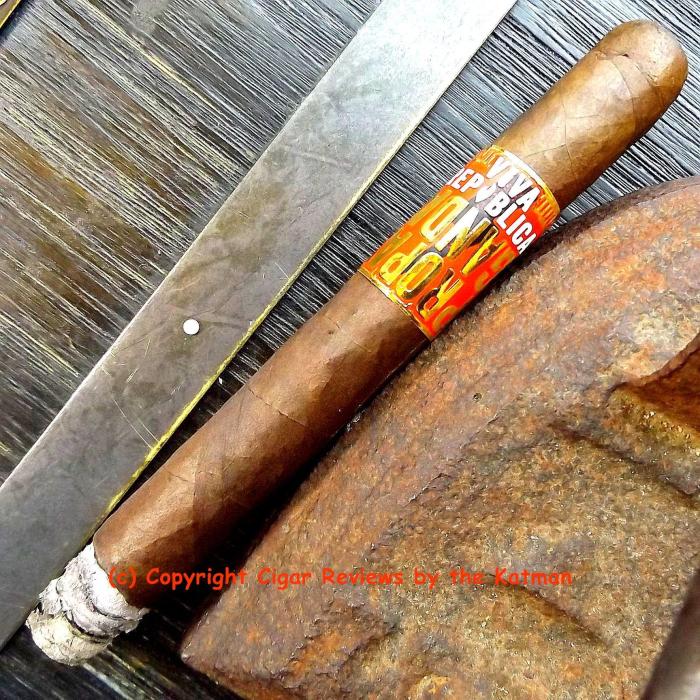 Color me impressed. All of that in the first half inch.
Remember yesterday’s review of the Room 101 Johnny Tobacconaut? A total disaster as the cigar literally fell apart on me. Now this Viva Republica Propaganda was in the same humidor for exactly the same amount of time. Fingers crossed.

Heavy on the outpouring of smoke. My puny head is disguised as a KKK member with pointy head formed by smoke. The char line straightens out.

The creaminess, spiciness, and chocolate are a perfect trifecta. The red pepper transforms to black pepper. The cinnamon and the nuts are pretty cool. Nougat and vanilla are swingin’.
This is how the Johnny Tobacconaut should have started.

Now the Viva Republica Propaganda only ranges from $7.50-$9.00 per stick MSRP. It appears by visiting a few online stores, that Viva Republica is allowing them all to sell the sticks at a lower price. But the exact same price. So no fucking with Viva Republica. No underselling. And these prices reflect about a buck less than MSRP. None of the usual boutique online stores carry them yet.

The ones I did find were Best Cigar Prices, Famous Smoke, and Atlantic. If you find it somewhere else, please inform us in the Comment Section below.

Based on what is being put out there, I cannot believe this stick’s MSRP is only $8.75 but can be had for $8.00.
But no online store carries the Bandwagon. Charles must have gotten them from his local B & M or the boutique stores are out.

I remove the cigar band from the second cigar and there is way too much glue. I want purty pictures for my readers. Maybe better luck with the review cigar. 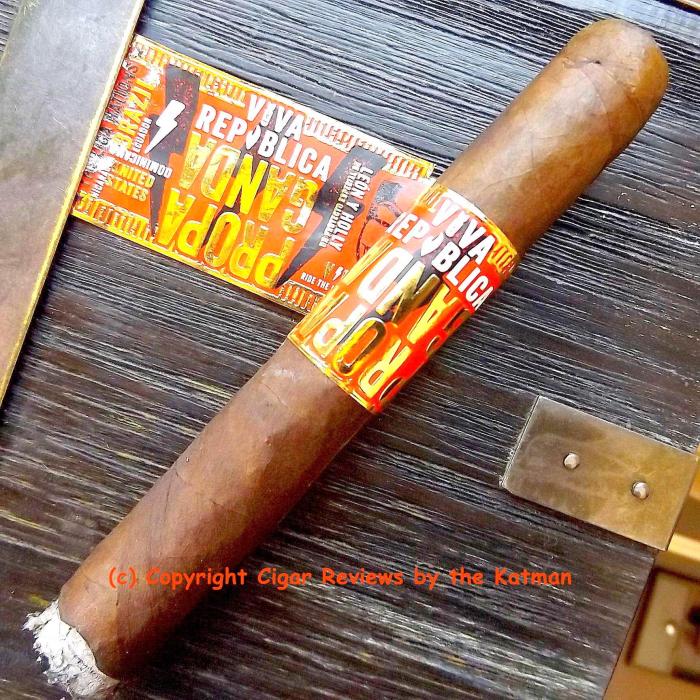 I just read Halfwheel.com’s review. He talks about the flavor of Mayan chocolate. I have no idea what that is. I have to look it up. It is a drink. Not a type of chocolate. And dates back to the Mayan era.
Here are the ingredients:
Raw cocoa beans
Dried chile
Cinnamon
Cornmeal
Water
Honey
You can buy it already prepared on Amazon. 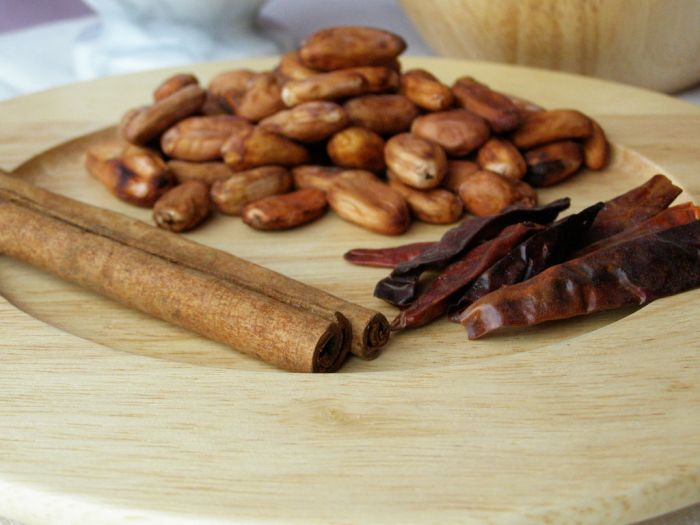 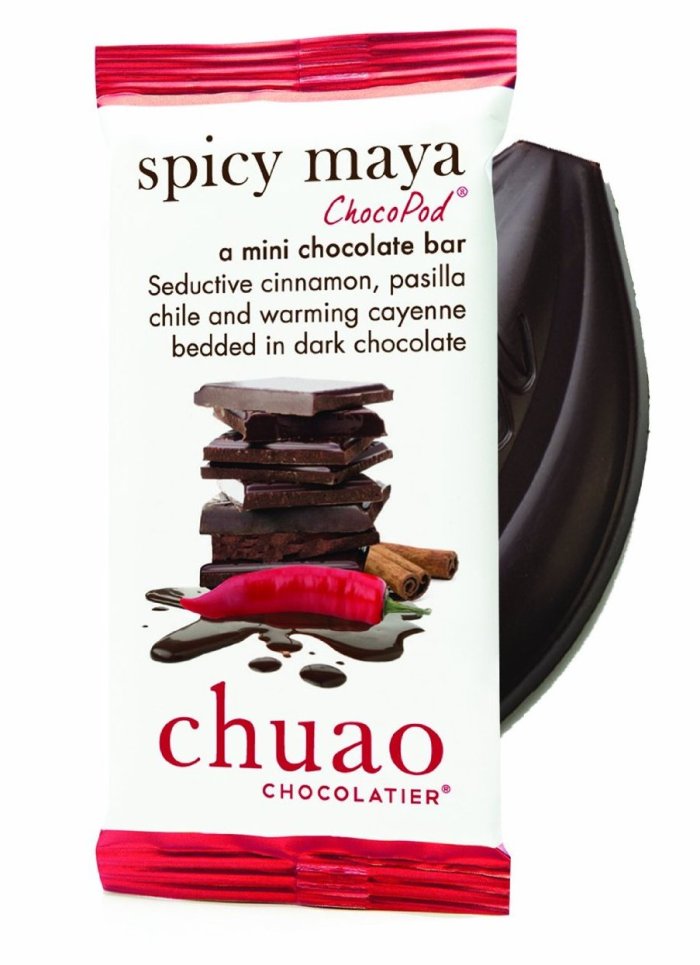 The Chuao Chocolatier Spicy Maya Chocopods (Mini Chocolate Bars) was Voted Best Chocolate in the U.S. by Food & Wine magazine. Sounds good but alas, no sugar free version.
I still have no idea what that tastes like. I have to get out more often. 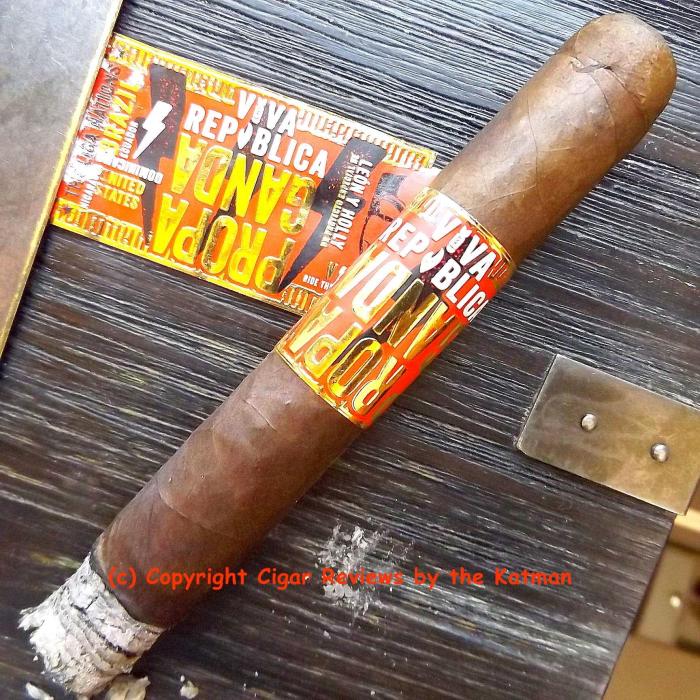 We had our Thanksgiving last night. I managed to make the turkey but my daughter did the rest of the cooking. It was a marvelous night. I have way too many bad days. Alzheimer’s has a way of dragging you down. Yesterday was a very good day.
Katie’s husband, Hawk, spent time with me in the man cave smoking cigars and watching football. His first name is John but his parents actually gave him the middle name of Hawk and that’s what everyone calls him.
He is a Milwaukee cop. He is a really good kid. I like Hawk a lot and he adores my daughter. Of course, seeing my wife might scare him if he wonders what Katie will be like when she is much older. LOL. But the kid already has that German stubbornness. But she has my sense of humor. In fact, she is hysterical. She is way funnier than I have ever been. So, all in all, it was a marvelous evening. I hated to see them leave.

OK. Where was I? Yeah, the Viva Republica Propaganda.
Strength is full bodied. But so smooooooth. Lots of transitions. Very complex. Beautiful balance. And a long, chewy finish.
I’m at the halfway point. Smoke time is one hour 5 minutes.
Great cigar!

Almost all the reviews use the Five and a Half Truth 5.5 x 54 ($8.25 MSRP) for their subject.
I do believe this is the first review of the Bandwagon 7 x 50.
The Viva Republica Propaganda is giving me char line issues now. One little spot tries to take off and run. Bummer. 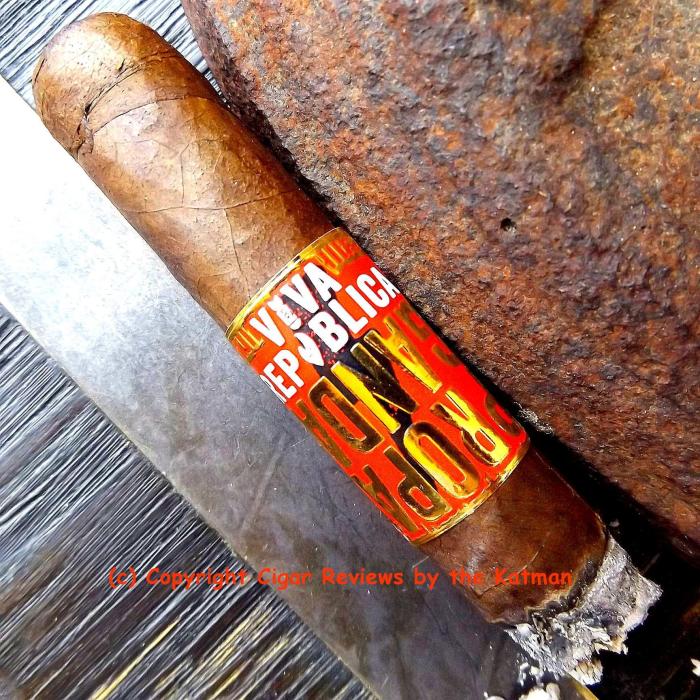 The black licorice surges. I love licorice. I haven’t eaten any in years because finding good sugar free licorice is impossible. I’ve tried them all and they suck. Or they are sweetened with Maltitol which gives you the shits.

Nicotine kicks in. Uh-oh. I still have a little less than 3” to go and at the rate this cigar smokes, I’m going to be a basket case by the time it’s over. So I suggest a full stomach before lighting the Viva Republica Propaganda.
I’m able to remove the cigar band with a little more ease than the second cigar. 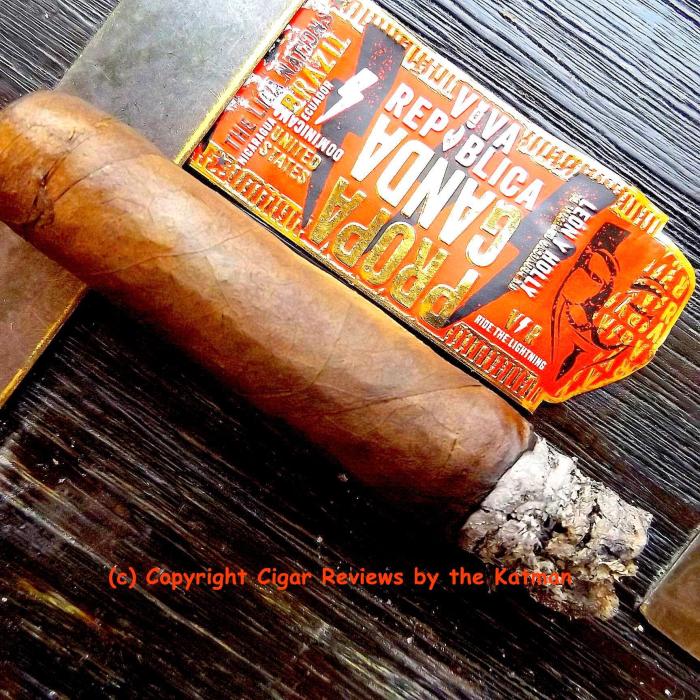 I don’t usually smoke Churchills. A big investment of time. And the chance of boredom to set in.
Fortunately, this is such a good tasting blend, time flies. Even though this will be a 25,000 word essay.

LAST THIRD:
Smoke time is one hour 45 minutes.
I think I’m hallucinating. Look at the pretty colors. And the posters on the wall are melting.
Some days I’m just jinxed. So far, every ash has fallen every possible place but the ashtray. What a mess.
When this is over, I’m having a nice turkey sandwich. 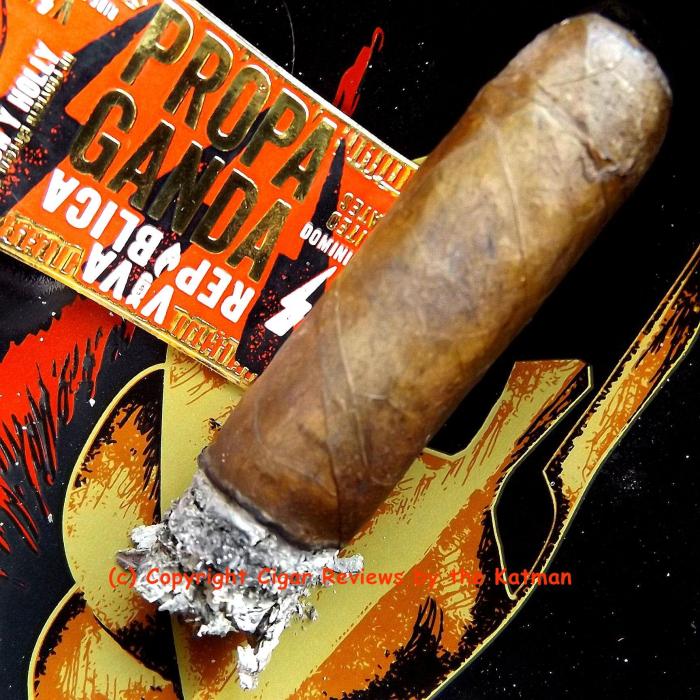 If you use usps.com for shipping packages enough times, they offer you sort of an app. It is called My USPS. Sign in and it shows you every package being sent to you. Pretty cool. It will also send you daily updates of the tracking by email.

I added a note to the Room 101 Johnny Tobacconaut review yesterday. Whenever I have severe construction issues, I worry that my readers will think it is my fault. Well, I smoked three cigars from the same humidor that I received at the exact same time and nary a single problem with the construction or burn line. So it wasn’t me. It was the cigar.

I’ve got tremors something awful this morning. So, I apologize for my photos.

I’ve been sitting here for 3 hours. My back feels like I’ve been jackbooted.
I probably would have been better off reviewing the 5.5 x 54 size. But never look a gift horse in the mouth. LOL.

The Viva Republica Propaganda is an excellent blend. I’m sure it will show up on the online boutique stores soon. Sure you can buy this size for $8 at the three shops I mentioned earlier. But at a little over $7 with your membership discount makes it even more wallet friendly. 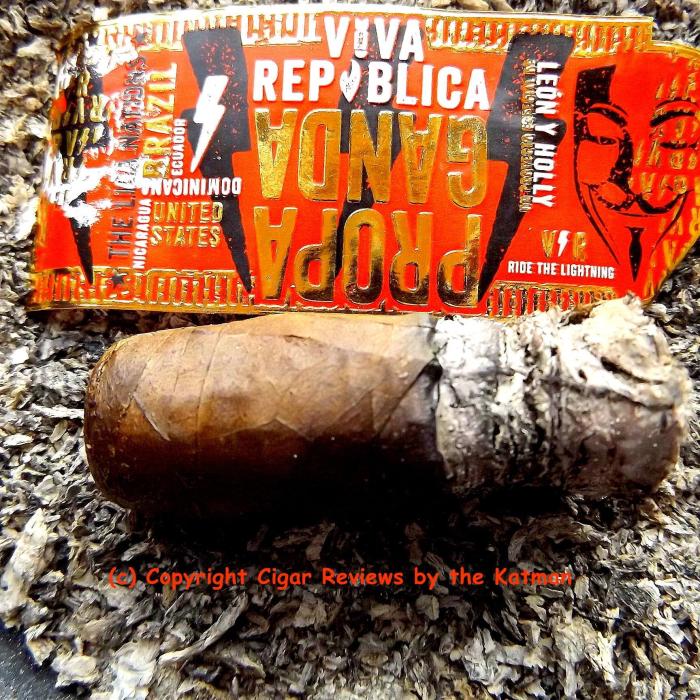 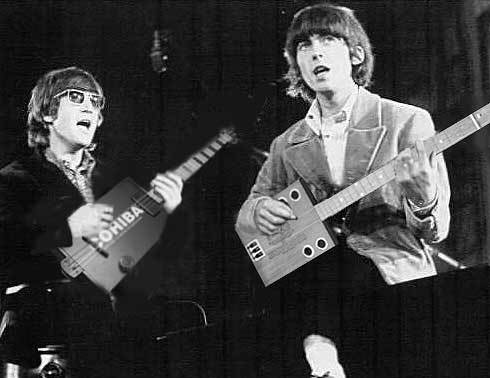