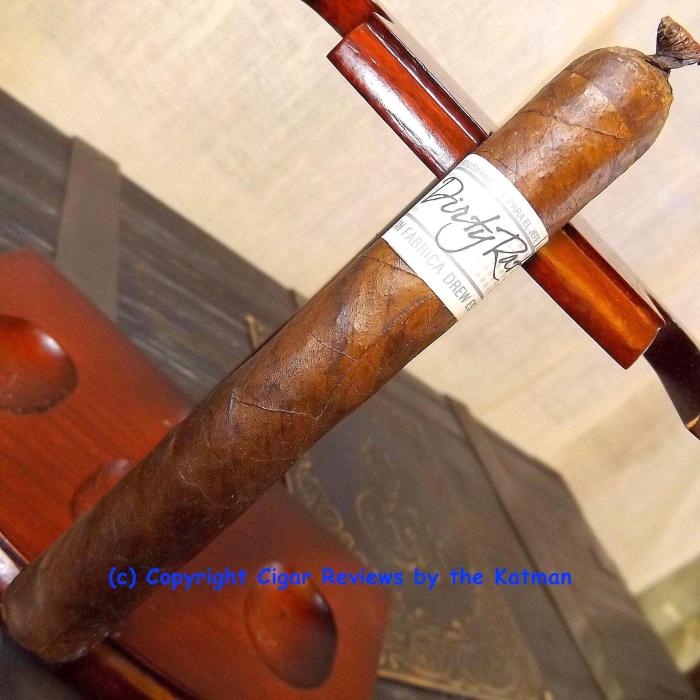 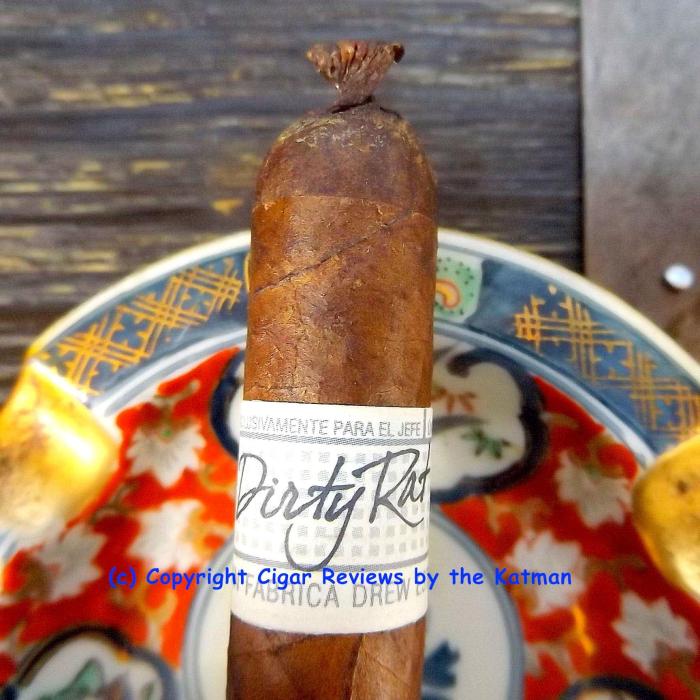 Today we take a look at the Liga Privada Único Serie Dirty Rat.
Thanks to Bryan Kinnaman for the cigar.

DESCRIPTION:
Release Date: August 2011
A very oily attractive cigar. The wrapper is the color of dark walnut wood. And the mottling gives it real distinction. Seams are invisible. And the tiny veins give it more character.
This little firecracker is solid. No under filling going on here. And lastly, the cutesy Cuban fan tail caps off a gorgeous cigar.

AROMAS AND COLD DRAW NOTES:
From the shaft, I smell cinnamon, sweet cream, fruit, and spice.
From the clipped cap and the foot, I smell dark chocolate, spice, cinnamon, cream, sweetness, fruit, strong cedar, and baked apples. (I saw that Halfwheel described the aroma of spicy apples and he nailed it. I taste my mother’s special occasions baked apples. Loved those growing up.
I manage to remove the cap without taking a single piece of tobacco from the top of the cigar which gives me the perfect yarmulke beanie cap with a propeller.

FIRST THIRD:
The draw is pretty good but just a tad bit airy.
First up to bat: Chocolate, spiciness, creamy, malts, and some mysterious flavors at this early point I will discover later.

Right of the bat, complexity begins to roll in like a rogue wave. The Liga Privada Único Serie Dirty Rat wastes no time with the precious moments of its Corona size.

The pepper isn’t as strong as I’d hoped. Bryan never told me if he has had this cigar for quite a while or just recently acquired it. My opinion? He’s had it for a while. Hence; the lack of intense spiciness at the start.
Strength is medium/full. 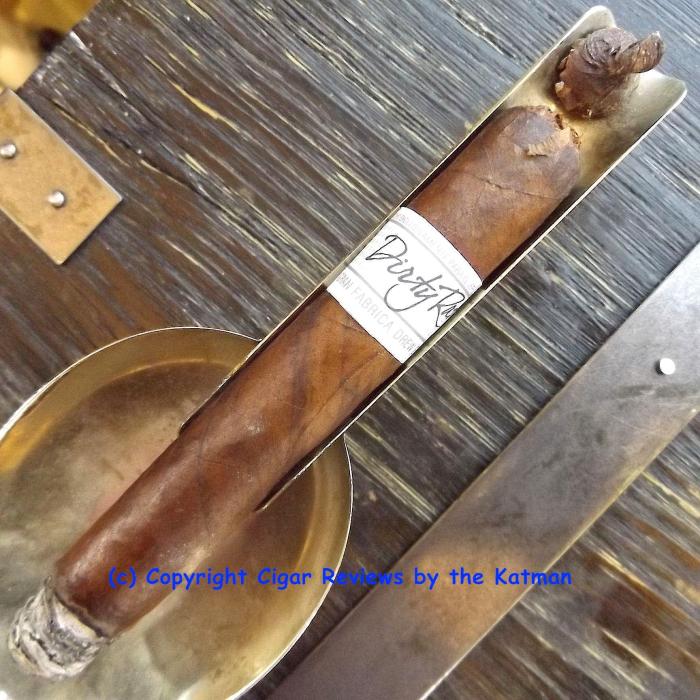 Then Bang! Both the spiciness and creaminess smack a homer over the fence. Wow. From mere soft points to incredibly intense. And only an inch in.

The airiness of the draw is back to normal. This stick is filled near perfect as it is a slow smoke.

SECOND THIRD:
Smoke time is 20 minutes.
Just before I started the second third, I got a major run. It forced me to torch about half an inch of wrapper to catch up to the bottom of the run. Then I let it rest so as to cool off and stop the progress of the run.

This little bugger pushes smoke like a Gordo.
The Liga Privada Único Serie Dirty Rat is a complete cigar blend. It has all the characteristics of a cigar I love to smoke. The complexity is rich and decadent. The balance is on point. And it has a long, chewy finish….makes me smack my lips between puffs.

I’ve ruined my nasal passages from retrohaling. Burns like a mutter futter. All good things must come to an end.
Because it’s a corona, it has an intense flavor profile. But I would love to insert this intensity into a Toro.

Halfway point. Smoke time is 30 minutes.
I know that lately I’ve been stamping the reviewed cigars as flavor bombs. I try to avoid that phrase because I tend to use it too much but the Liga Privada Único Serie Dirty Rat is a true flavor bomb. Can’t help it.

The Liga Privada Único Serie Dirty Rat is a 9 on the Relax-O-Meter. This is a blend one savors every puff. Because with each puff, the blend brings something new to the table as the complexity keeps reaching.
So smooth.

For those that miss my rock stories at the end of each review, I’m sorry. But I’ve written hundreds and hundreds of them and I’m out of gas. I could go back and find ones that I’ve published half a dozen times but it is hard enough getting through just the review with my friggin’ brain disease. If you want to read any of the old stories, merely type in Phil Kohn bass, bass, Hal Blaine, Curved Air, Eddie Munster, Butch Patrick, etc. in the Search Window and it will bring up all the reviews with stories at the end.
Where was I?

I’ve been amending my Top 25 Cigars of 2015 as I’ve been reviewing cigars in January that came out in 2015. Or just change of mind. I should have gone rogue and provided a Top 50 Cigars of 2015. That would have been easier…because I left out some great cigars.

Some reviewers actually put cigars that cost $400 or more in their list. Now who the hell will ever have the chance to smoke one of those? Elitism. Plain and simple. “Look at me. I got a million dollar cigar because the manufacturer likes me.”

I made a real attempt to list cigars that were affordable. Yes, I took that into consideration. No point listing cigars that readers cannot afford.

Speaking of which, I shall review the Cohiba Black Gordo tomorrow. It’s been marinating for a couple of months and its ready. That’s a $20 cigar if you buy a single.

I’m doing this because I’m RUNNING OUT OF CIGARS! I have a couple cigars left that I can review and that’s it. So I will do the Cohiba and I’ve also been given the Chogüí Dos77 Rogusto but it needs some humi time.

Damn Willy boy. This is one magnificent blend. The highest rating I ever gave was the Dunbarton Tobacco & Trust Sobremesa Robusto Largo. I gave it a 98.
The Liga Privada Único Serie Dirty Rat is every bit as good…maybe better.

Bryan sent me an Ezra Zion The Collective. I believe it came out in 2014 otherwise it would have been in the top 10 of my list for 2015. He also sent me a Vivalo. Great cigar.

But the Vivalo folks made some pretty big promises to me and then reneged. For over a month or so, they kept giving me excuses. They also wanted to sponsor me. But every time I asked if they changed their mind, I got a bunch of lame excuses. But ask for an ad to post, and wham bam thank you ma’am, it was in my email box two minutes later.

I don’t abide by liars. And manufacturers that constantly lie to me don’t deserve a place on my Top 25 list. It’s not petty. It is being taken advantage of. If I had a dollar for every manufacturer that promised me things and then reneged, I’d be a wealthy man. Same goes for some readers. I don’t get it. They email me out of the blue with promises of a car load of care packages and then disappear. That’s just damn cruel. I have to whine. It’s in my DNA like all Jews.

I got a wonderful email and comment from Natasha of Gran Habano Cigars. It’s posted on my good bye post.
OK. My Alzheimer’s has me wandering all over the place.

LAST THIRD:
Smoke time is 45 minutes.
The Liga Privada Único Serie Dirty Rat is coming to an end. The problem with Coronas is that it’s tough to really finish them as they become too small. I’ve got cigar roach clips but they smash the shit out of the cap. Doesn’t make for a nice final photo.

I have a Xistix cigar holder and it seems to work fine by not crushing the end of the cigar. Nub, here I come. Here is a photo of the cigar clip. Not cheap at $25 but it works well. 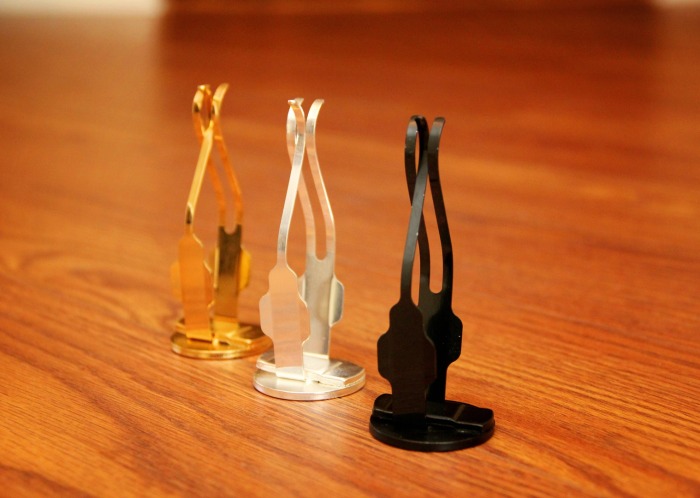 There is nothing left to say about this wonderful blend. It has everything.
If you can afford it, it is perfect for newbies and experienced smokers alike. While it is medium/full heading towards full body, it is so smooth that one doesn’t notice the strength. Plus there is no heat, no harshness and zero nicotine rush.

I can’t thank Bryan Kinnaman enough for gifting the Liga Privada Único Serie Dirty Rat to me. A great cigar to add to my catalog that will come to an end soon.
Final smoke time is an hour. 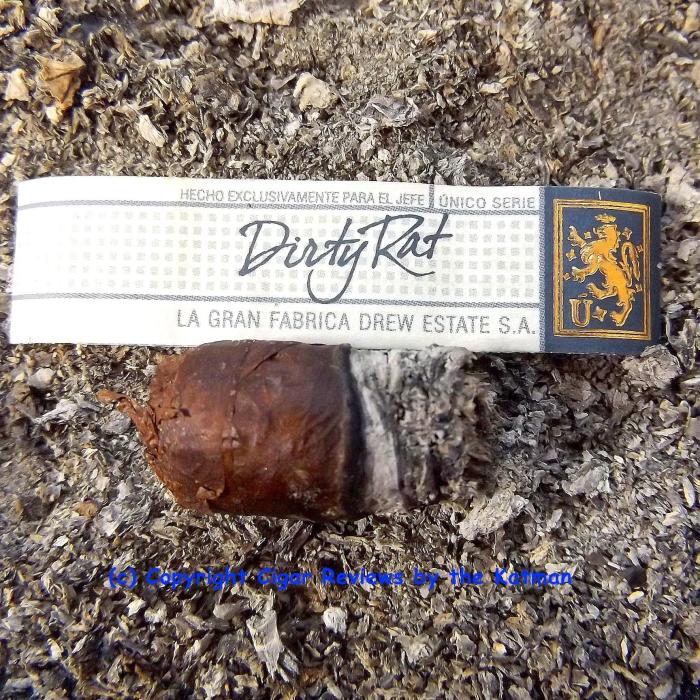