Today we take a look at the My Father Limited Edition 2015 5th Anniversary.
I’m terribly sorry but I forgot the name of the reader that sent it to me. It’s fading my dears, its fading.

BACKGROUND:
Factory: My Father Cigars S.A.
Release Date: July 9, 2015
Number of Cigars Released: 14 count boxes. 4,200 boxes released. 4,000 boxes for the US Market and 200 boxes for the European market.
Each stick is in an individual coffin.

According to Cigar Aficionado:
“My Father Cigars is preparing to roll out a limited-edition cigar for the year 2015
“It will ship to retailers nationally before IPCPR on July 17. The cigar is called My Father Limited Edition 2015 5th Anniversary Toro, and it celebrates the company’s fifth anniversary since its inaugural limited edition release in 2010.

“The cigar features an Ecuador Habano wrapper that the company calls “Rosado Oscuro,” all Nicaraguan fillers, and two binders: a Nicaraguan Corojo 2006 and a Nicaraguan Habano. The launch of a special My Father limited-edition cigar is something of a tradition for the company, although the cigar is not always released on a yearly basis.

“My Father Limited Edition is an occasional release, always dependent on the availability of the aged tobacco,” Alcides Montenegro, general manager and advertising director at My Father Cigars, told Cigar Aficionado. “The process takes time. We are very respectful of this.”

“The cigar measures 6 1/2 inches by 52 ring gauge and has a suggested retail price of $23. The limited-edition cigar ships in boxes of 14, each with its own individual coffin. Only 4,200 boxes will be released—4,000 for the United States and 200 for the international market. My Father Limited Edition 2015 5th Anniversary Toro is being rolled at the My Father Cigars Factory in Nicaragua.

DESCRIPTION:
An absolutely gorgeous presentation. Beneath the bling is an extremely oily, dark coffee bean colored wrapper. Seams are tight..not too many veins. The wrapper just shines from oil in the artificial light of my dining room. That’s rare.

It appears to have a quadruple cap. But it is so impeccably done, I need a magnifying glass to be sure.
The double cigar bands are beautiful and very artsy. The main band is the standard My Father band. Beneath it is a secondary band; just as beautiful, that says: “Limited Edition” and beneath that, in very tiny font it says: “By Master Blender J. Garcia.”
And finally, the presentation is finished off by a matching colored orange footer ribbon.

FIRST THIRD:
The draw is a bit tight as this solidly packed big cigar finds itself only letting the mere necessary amount of smoke through it.
In fact, it is so packed, that there is little or no give when depressed by my finger. Yet, it pushes a lot of smoke into the air.
First flavors: Chocolate, nutty, citrus, cedar, malts, creaminess, sweetness, and a touch of herbal notes.
Strength is medium body. 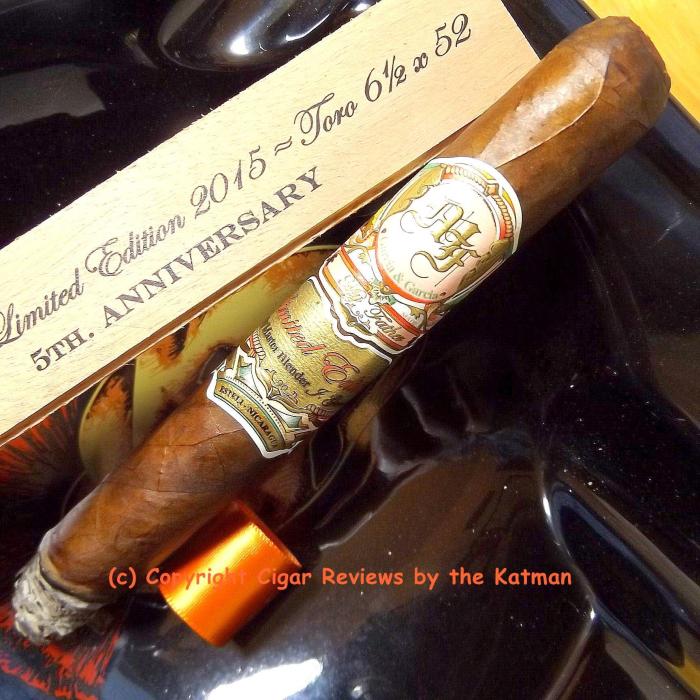 The consensus on this cigar is all over the place. Some giving it a rating of 85 and others 95. Go figure.
The start is totally free of the famous Garcia Pepper Bomb. How odd.
As the cigar burns, more flavors: vanilla, floral notes, honeysuckle, caramel, mocha java, and cinnamon.
Still no spiciness to speak of.

I got two care packages yesterday and I forgot to write down of who gave me what. It is either Tom Collins or Jeff Johnson. I apologize profusely boys for not remembering to write it down.

Construction is top notch…as one expects from a $23 cigar. The burn line is impeccable.
The Garcia folks put out the My Father Limited Edition 2015 5th Anniversary thinking that a mere 5 years of service and production qualifies for a wallet bursting $23 price point. Are they insane? The Padron 50th Anniversary is $25. 5 years? 50 years? $2 difference?

I read several reviews and there aren’t many. Methinks one of two things. The cigar ain’t that great and reviewers with ties to Garcia don’t want to bite the hand that feeds them.
Or…the cigar has proven to need a whole lotta’ humidor time. Old School. Which in general terms, does not describe the My Father and Garcia blends. A good 4 weeks and blends are usually ready to review.

I don’t think I found more than half a dozen reviews for a cigar that’s been out since July of 2015.
I did discover that The Robb Report named it No.5 in its yearly “The 5 Best Limited-Edition Cigars of 2015.” The other four, in order from top to bottom: Quesada Reserva Privada, Trinidad Lost Blends, Macanudo Estate Reserve 2015, and Dunhill Signed Range Selección Suprema. That seems to be an odd, out of touch, list.

SECOND THIRD:
Smoke time is 35 minutes.
Strength begins its move towards medium/full body.
The My Father Limited Edition 2015 5th Anniversary is nothing like I expected. It has disappointed so far.
It is semi-flavorful. But it’s not potent bursting with transitions and flavors. Not to mention, the spiciness is weak.

How many months, exactly, does the cigar need to age in one’s humidor? This may be the reason for some of the lackluster reviews. But then they are the Big Guys who get their cigars from the manufacturers early and therefore can allow them to rest properly. But it is these guys that give the cigar a low rating.

No change in flavors to speak of at the start of the second third. So, it will be relegated to the last third before it perks up and gives us a chance to see what it will taste like in a year. Or maybe not?
A few sips of water and flavors become a bit more interesting.

The creaminess and orange zest give it that Orange Creamsicle flavor. The chocolate is weak. Cinnamon takes the place of pepper. Vanilla, floral notes, honeysuckle, caramel, and mocha java are weak as well. They lay beneath the surface; sort of prick teasers. Even the malts falter. The nuttiness and herbal notes are near the front of the line.

I read the Halfwheel.com review. I have more in common with that review than ever before. The writer is experiencing the same things I do. Grand disappointment.
Now this is a $23 cigar released in July. That’s over 6 months ago.

Google the My Father Limited Edition 2015 5th Anniversary and you can find it everywhere. My Father put out 56,000 cigars for the U.S. A huge number of online stores still carry the cigar. Not to mention the list of B & M’s that carry it.

It’s not selling. A brilliant blend released over 6 months ago should have been scooped up by now. Regardless of the price. I think My Father stepped on its own dick.

I get a serious issue with the burn line. Time to touch it up.
I had really high hopes for this blend. I never would have thought it would disappoint.
Strength is just a tad bit over medium body.
Halfway point. Smoke time is 50 minutes.

Man, this is a bummer. Clearly, the halfway point does not bring the My Father Limited Edition 2015 5th Anniversary to life.
And then a miracle happens. Flavors arrive like the Rose Parade.
The spiciness finally hits like a neutron bomb. Big bold black pepper.

The creaminess, orange zest, chocolate, malts, vanilla, herbal notes, sweetness, caramel, floral notes, and cedar all put their right foot in and do the Hokey Pokey.
About fucking time.

This should not be the case for an expensive cigar. It should be ready to go in a reasonable amount of time. It should shine from the first 5 puffs. Even if it were green, that famous Garcia Blast of Pepper should have been there.
And now, I’m having recurring burn issues.

Maybe with 9 months of humidor time, this blend will shine.

I believe that Garcia was the leader of the New Breed style of blenders. No extensive humidor time required for those anxious to smoke his blends.
At this point, I cannot recommend the My Father Limited Edition 2015 5th Anniversary. Even if it improves in the last third. I have no idea if the blend will be a killer half a year from now. It’s the chance you take reviewing a cigar that is a gift. One never really knows how much humidor time it received. And then again, it might have nothing to do with the flavor profile.

Halfwheel didn’t think much of the cigar and I betcha a dollar, they never review a cigar before it’s time. They have the opportunity to let it rest til its ready. But still gave it an 86.

Based on the date of their review, I’m guessing they gave it two months of rest. And we pretty much agree on the outcome.
The only transitions are the flavors coming and going. One moment they are in full display. The other, missing in action.

The My Father Limited Edition 2015 5th Anniversary is missing oomph, zest, and strength. It actually seems to be slipping from medium+ to mild/medium body. Shouldn’t it be the other way around?
Supply and demand is the measuring stick for this stick. Go to any of the boutique online stores and see the expensive cigars fly off their shelves. Smokers don’t mind spending their monthly food allowance if the cigar is worth it.

LAST THIRD:
Smoke time is one hour 20 minutes.
Still not impressed. Strength has moved to medium/full body. This helps.
If this is, in fact, all there is to the My Father Limited Edition 2015 5th Anniversary; it belongs in the $5 category.

Cigar Aficionado only rates it an 88. This is all it had to say about the cigar: “Wrapped in a gorgeous cover leaf, this hefty cigar starts out slightly bitter and herbal but warms to show an earthy smoke with some woodiness as well.” Not exactly high praise.
Based on The Robb Report, this is a great cigar. But their other choices leave me scratching my head.

I could not find a single Top 25 Cigars of 2015 list with this cigar on it.
Clearly, My Father really fucked the duck on this one. As it was released in July, it had 5 months to impress smokers who make the lists. And it couldn’t make one list.
Flavors are a bit better. There is a nice warmth to the blend. The newly formed strength makes a big difference.
A seam comes loose. Natch.
I hope I review a better cigar for you tomorrow.

As the last third burns, the flavor profile increases to something more interesting than the rest of the cigar.
Cigar King, who sells cigars, reviewed it. And they come to the same conclusion as most other reviewers. Dud. And yet they sell the cigar. That must have been tough but I respect their honesty.
Another big guy review site makes the cigar sound like the Second Coming.
Cigar Coop doesn’t review it. That surprises me a lot. And also says a lot.
I found dozens of online stores selling them. But couldn’t find more than 5 or 6 reviews.
And only one thinks it is manna from the gods.
I want to thank the kind reader that sent me this cigar. And I apologize for this review. I’m sure you were hoping for a rave review.