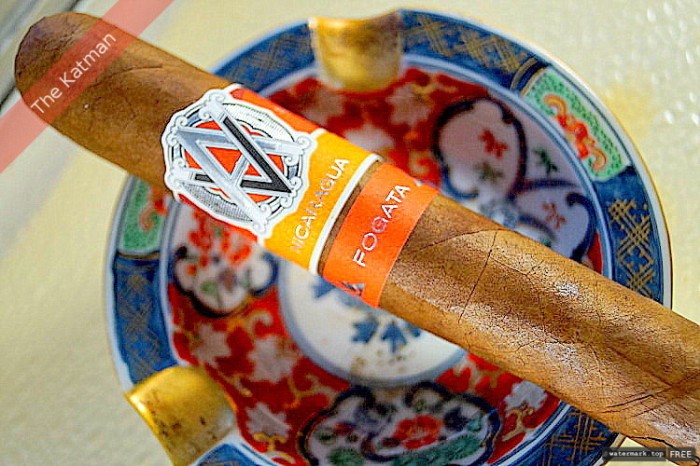 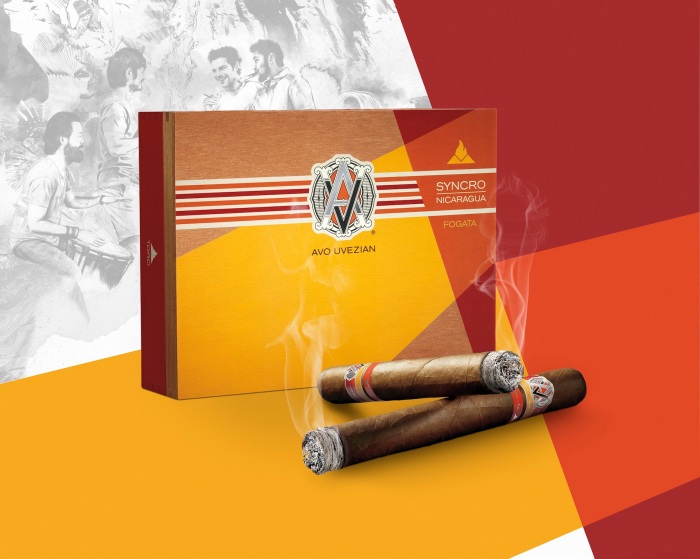 Today we take a look at the AVO Syncro Nicaragua Fogata.

Cigar Aficionado only gave the Toro a rating of 86. The Short Torpedo got the same 86. Interesting.
The “original” Avo Syncro Nicaragua was given a 93 by CA and rated No.16 in the Top 25 Cigars of 2015. It seems that Davidoff did better with the original than the follow up. Bummer. Here we go laddies…

Speaking of which…you’ve watched “The Munsters” right? You know that it only ran two seasons? Back in the day, seasons were long…44 episodes per year. Butch made 88 shows in 2 years and now lives on in syndication.
Know how much he made for 88 episodes? $44,000. TOTAL! He made $500 per episode. Back then…no royalties were doled out unless you had juice. Fred Gwynne had juice and got a percentage of the show plus royalties. No one else on the show got paid extra. Butch rarely talks about this.

Butch was really small for his age. In those two years, little Eddie went from ages 13-15 but looked much, much younger. He did a shit load of 70’s TV series and got his royalties. The law was changed by then protecting actors.
When he and I were working together in the 80’s, he asked that his royalty checks be mailed to my home. Apparently, Butch’s mom would cash all the checks that still came to her house. So I’d get a $65 check for him appearing in a “Mannix” episode or a $93 check for “Ironside,” etc. He told me that Raymond Burr was gay (Perry Mason was gay?) and he liked little Butch…a lot.

DESCRIPTION:
The oily wrapper is a chestnut/butterscotch brown. A small amount of tooth.
Seams are invisible but veins abound. A bit on the rustic side with lumps and bumps.
The triple cap is invisible. No seams.

FIRST THIRD:
This big firm stick has a perfect draw.
I dropped the stick on the carpet where I sit and type. In getting up to find it, I stepped on the foot. I made a mess but it’s the only stick I have. This was a first for me. So no photos til I pass the disaster area.

Red pepper bursts from the seams. A generic sweetness pops its head up like Punxsutawney Phil.
Strength is medium body.

Other flavors begin to exit the vomitorium (each of a series of entrance or exit passages in an ancient Roman amphitheater or theater). The first time I saw the term: Vomitorium used on architectural plans, I thought it was a joke. It’s just an exit from the theater to the outside or lobby. I wonder if architects still use that term?

Where was I? Flavors. Creaminess, caramel, pumpkin pie spices, a musky element, and the ever faithful Crème brûlée. I can taste the burnt caramel on top of the creamy custard innards.

I really fucked up the cigar stepping on it. Right now, the foot looks like a joke cigar that blew up on me. I shall pass hands over it and it will heal.

Then shit really kicks in with an inch burned. A boastful list of omnipresent flavors…like sweetened berries, coffee, heavy malts, luscious custard, caramel, that musky element, nougat, and unleavened bread.
Know what bothers me about the Cigar Aficionado ratings? Well, at least this one anyway…they never divulge how much time the cigar was allowed to rest in a humidor before the samples were presented to them. Or maybe they aren’t told? I have no idea. A little more transparency would be nice.

I’ve got a long way to go but so far, I tend to think this blend deserves more than an 86 that CA gave it.
Red pepper gives way to its step brother; black pepper.

The self-indulgency of the creamy flavors is sinful. I taste pumpkin pie with loads of home-made whipped cream atop it. Ever made homemade whipped cream by hand? Oy. What a royal pain in the ass. A can works just as well and tastes just fine.

No matter how much the foot burns, one quarter of the ash remains black as night. It is like the wrapper doesn’t want to burn. It is sticking its tongue out at me and telling me karma is a bitch when you step on your little friend.

SECOND THIRD:
Smoke time is 30 minutes.
Despite, I say, despite the foot being a mess due to my klutziness, flavors are not affected. They don’t run and hide.

It is here, that the AVO Syncro Nicaragua Fogata becomes a shit kicker. Complexity falls into place. Transitions are military in their formation. A very long creamy finish settles in.
It isn’t a strong cigar. Those that love medium/full or full body cigars might be a bit disappointed. Perfect for newbies. And for those that can appreciate a good cigar regardless of strength…a nice change up.

Clearly, I am smoking a handicapped cigar. It just keeps making little cracks in the wrapper as the foot burns.
I am actually impressed that the damage I’ve done to the AVO Syncro Nicaragua Fogata hasn’t forced the cigar to fall apart on me…or affect its flavor profile.

Halfway point is here. Smoke time is 45 minutes.
I’ve found the sweet spot. Flavors have become daring and intrepid. Did I leave out the Enterprise?

My daughter and her husband finally got to take their honeymoon 6 months late. Eight days in California. Started in San Diego three days ago and today they head off to Livermore…up north. It is where Katie went to high school while I worked a gig in Fremont. Right of the San Francisco bay area. She reported that temps were 95 degrees on the beach.

Flavors are great. The muskiness becomes mushrooms sautéed in butter.
Again, I don’t understand Cigar Aficionado some times. 86? Really? The AVO Syncro Nicaragua Fogata is better than that.

OK. Here is a comparison. I rated the original AVO Syncro Nicaragua only an 88. Seems that the blend was inconsistent. Flavors came and went. It wasn’t bad…just wasn’t great. Despite opposing views, I feel the Fogata is a better blend. I’m running counter to CA’s opinion.

I find myself pretty much in step with the other reviewers that thought the Fogata is a very good cigar…except for one that rated it an 80. The rest all in the low 90’s. All contrary to Cigar Aficionado.
Davidoff must have a choke hold on the pricing of this cigar and everyone is afraid of losing their business so they charge the MSRP. No deals available. No Cbid.

LAST THIRD:
Smoke time is one hour 5 minutes.
Strength maintains an even keel of medium body throughout.
Complex flavors. Transitions. Character. Nice and easy going down.

As this AVO is an old school blend, it must take months and months before it shines. I didn’t give it its due. But still, great potential.

As I puff away on the last third, the power of the Cosmic Muffin harkens the strength to move up a notch and nearly hit medium/full. This allows a little more pizazz to the blend. I prefer strong cigars.

The AVO Syncro Nicaragua Fogata has turned out to be a simply delicious cigar. What a relief. After stomping the shit out of the cigar on the floor, I thought all was lost. I feared I’d have to stop midway through the review and toss it. But no…the construction is top notch and it fended off my violent intent.

Oh shit. This is good my surfing moon doggies. Hang ten if you choose.
I’d love to have a box of these sticks, put them away for months, and enjoy them with the right amount of rest.

Seems all the other reviews waited no longer than I did before they began to write about the blend.
Hopefully, someone will wait the extra couple months and review this cigar. I’d be very interested in how much improvement the time differential makes.

With 1-1/2” to go, I hit the blender’s intent. This is how the cigar will taste from the start with a few months of humi time. Lawdy, lawdy. Great flavors. Sweet Spot 2.0.

The AVO Syncro Nicaragua Fogata hits a strong medium/full.
Even nicotine enters the picture. Mild but cannot be ignored.

Now is it worth $11.00? Not sure. The mean average of good cigars seems to have come to rest on the $12 price point as of late. Even Ezra Zion is selling their product at this level. A far cry from a year or so ago.
Has $12 become the new $8 or $9 stick? And this is online…not at your local B & M where taxes will slaughter you.

The AVO Syncro Nicaragua Fogata held up beautifully despite my brain fart of stepping on it.
The blend keeps my interest as the complexity continues without unneeded excitations. It is smooth. Transitions are the best since I first lit the cigar. The finish is long and luxurious.

The first one I lit up was way too soon and I was sorely disappointed. So should you decide to purchase some, do not strike one up ROTT. You will have wasted $11.
Be patient.

OK. It’s worth $11. I have trouble typing this but I get through it with Moe slapping my head with a block of cheese so I can calm down.

If the required humidor time is met, this stick should rate much higher than what we reviewers have bestowed upon it.

Now that I think about it…I wonder if I smoked the original AVO Syncro Nicaragua too soon?

Reviewing a cigar is a fucking guessing game. Unless you have a box of cigars to experiment with, it is total lunacy for conjecture when a blend is ready if you only have two to play with. I try to insist with manufacturers that they send me a 5 pack. In the end, 90% of them only send two sticks. In the final outcome, it only hurts the manufacturer when he is stingy.

A cup of strong coffee is the perfect complement to this blend.
Definitely steal some dough from your wife’s wallet and snag a few.