Big Papi by David Ortiz | Cigar Reviews by the Katman 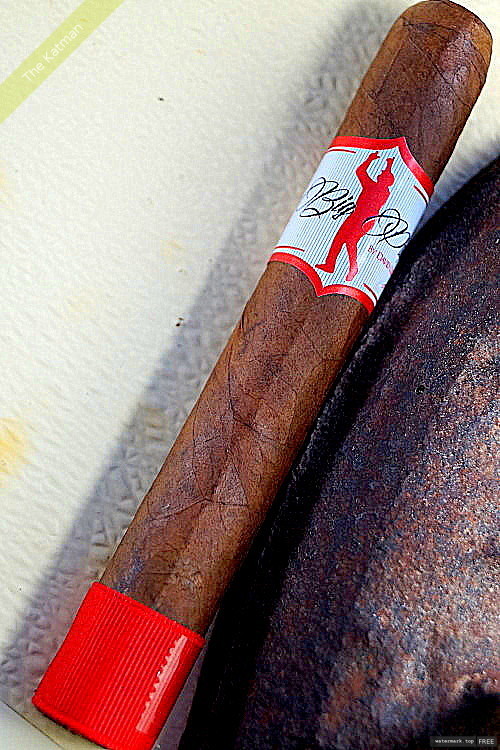 Today we take a look at the Big Papi by David Ortiz made by El Artista Cigars.
Thanks to a friend for the sticks.

I’ve made it clear that I’m not a fan of celebrity cigars. They tend to be overpriced and under blended. My reviews and ratings reflect that position. But just one has to hit the bullseye to give me hope. Will it be Big Papi? Let us begin.

BACKGROUND:
From Wikipedia:
“Ortiz’s nickname “Big Papi” originates from his habit of calling people whose names he can’t remember “Papi”. The nickname was given to him by Red Sox broadcaster Jerry Remy.

“David Américo Ortiz Arias, 41, is a Dominican American retired professional baseball player. Ortiz was a designated hitter (DH) in Major League Baseball (MLB) who occasionally played first base. He played for the Minnesota Twins from 1997 to 2002 and the Boston Red Sox from 2003 to 2016.

“Ortiz was a ten-time All-Star, a three-time World Series champion, seven-time Silver Slugger winner, and he holds the Red Sox single-season record for home runs with 54, set during the 2006 season.

“In Boston, Ortiz established himself as one of the most powerful sluggers of all time. He was instrumental in the team ending its 86-year World Series championship drought in 2004, as well as during successful championship runs in 2007 and 2013. He was the MVP of the 2013 World Series.”

“Each time Ortiz crosses the plate after hitting a home run he looks up and points both index fingers to the sky in tribute to his mother, Angela Rosa Arias, who died in a car crash in January 2002 at the age of 46. Ortiz also has a tattoo of his mother on his biceps.”

DESCRIPTION:
This is a beautifully marbled pecan/caramel colored wrapper. With oil to spare.
There is a fine grain of tooth. Seams are invisible. Lots of veins, both big and small.
A solid stick with a perfectly applied triple cap.

FIRST THIRD:
Let’s start with a quiz.
What is the most highly regarded guitar solo in rock history? (Remember: This is not my opinion but the opinion of the greatest guitarists in the world and the top echelon of professional music reviewers.)
Name the band, the song title, and the guitarist. Hint: Brit band.

Easy draw and first up: Chocolate, cream, black and red peppers, malt, coffee, and roasted nuts.
Complexity settles in right away. Transitions begin a lava flow past my palate.
I gotta admit…I am pleasantly surprised. I did not expect the Big Papi by David Ortiz to start with a big bang.

The dual fighting peppers are a joy. Each one is duking it out with the other for supremacy.
Now…fingers crossed. Can the Big Papi by David Ortiz not only maintain this quality but build upon it over the next 90 minutes? (I’m shaking in my Wellington boots while my pet sheep shutters in anticipation.)

The Big Papi by David Ortiz has a very heavy sensibility. It rests heavy on my palate and my chest. Wait…er…my left arm hurts. Never mind…just gas.

Creaminess moves up the line…creating a nice concoction comprised of chocolate and coffee. The marshmallow effect is pleasantly strong.
Malt and rye joins the fray completing the picture. 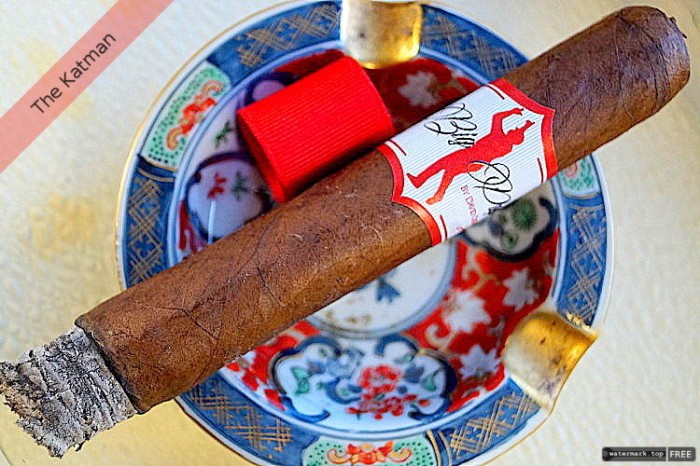 I am honestly impressed with my first celebrity cigar…ever! El Artista Cigars….you did good, buddies.
A nice slow roll with a savory declaration of immodesty.
Complexity pulls the individual flavors together creating some impressive distinction.
Touches of caramel, peppermint, dried fig, and lavender appear.

I get a small crack in the wrapper. The weather in the Midwest has been terrible. Snow? Not so bad. But the cold…oy vey. It is currently -29°…going up to -10° this afternoon. 7-10” of snow tomorrow. Brrr…And of course, my wife Charlotte wants to go Xmas shopping today. It hasn’t been this cold since last year. Methinks she will be sorry if she goes on her errands. I shall rest in the reclining position watching blues concerts on Blu-ray.

No matter how I shield my cigars, the cold just can’t be stopped from permeating our apartment. Of course, it doesn’t help that I have to crack the windows in my mini-man cave for smoke to escape while allowing the arctic air to run rampant. The cat’s whiskers have icicles.
Other than this horrendous cold, the cigar is holding its own with impeccable construction. No touch ups required.

Then Sweet Spot 2.0 appears like magic. Flavors deeply intensify. Complexity digs its heels in. The dueling peppers are screaming laughter.

How much is this stick? $12.00. This might be a first. A celebrity cigar that isn’t $22.00. A cigar that most can afford for a treat.
And it kicks ass on all those other celeb blends. The JZ Cohiba Comador was the absolute worst.
The Big Papi by David Ortiz pulled it off. I see no slacking off of its potential right to the end. Exhilaration awaits me at the finish line.

Big Papi is cruising Whittier Blvd in a cherry ’58 Cadillac. 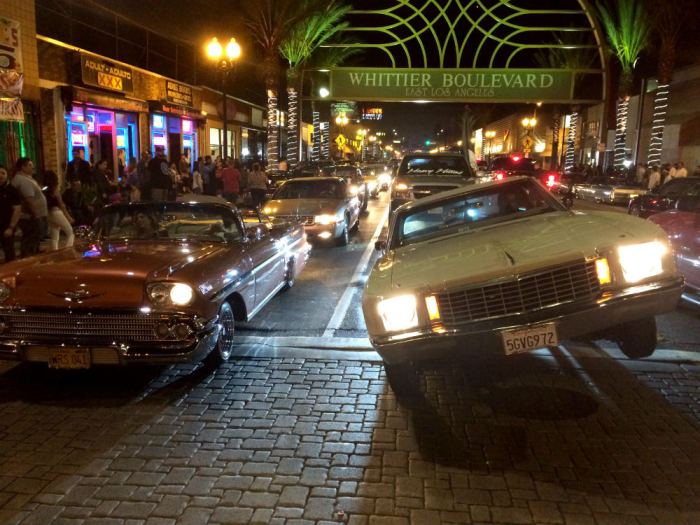 Damn. This is a fine blend. I did try one a couple weeks into its humidor time and it was nothing like what I am experiencing at 6 weeks. Glad I waited. The difference between a rating of 87 and 93.

My streak of lousy celebrity cigars has come to its conclusion. Someone finally figured it out that you just can’t use PR to sell a mediocre cigar blend that some famous schmuck added a cigar to his personal marketing strategy. You have to put your heart and soul into it. Where was the passion in all those multi blend expensive cigars that tasted like crap? There was none.
Now the Big Papi by David Ortiz charts a different tack all its own. It reeks of full flavor, little surprises of hidden gems, transitions whizzing by, and a rich intricacy.

A big Toro; but this phase has jumped the time space continuum. Each moment brings pleasure and satisfaction without sex being involved.

Here they are: Malt, chocolate, spiciness, creaminess, coffee, rye, caramel, peppermint, dried fig, lavender, roasted nuts, cedar, and musk. There are additional flavor elements buried in this treasure chest of a blend that I just find too complex for my palate. I’m stumped.

This is where those folks come in who say, “I don’t taste chocolate bull lard in this cigar. I only know it tastes good.”

At this point, it is just pure synchronicity.
Definitely a box worthy blend.
Could only find a couple reviews but all agreed with me in the final outcome.

The minor cracking of the wrapper stopped dead in its tracks half an hour ago.
The Big Papi by David Ortiz reaches full strength. Some nicotine appears.
Transitions have been dead nuts. On the money. No sudden lurches. Smooth and delicious.
I’m sitting next to a cracked window and my nuts have receded. I’m thinking of placing my cat in my lap til I finish this review.

Bam. The red and black peppers take off like a rocket. My sinuses exit my right nostril.
The nicotine disappeared while I wasn’t paying attention.

I’m simply amazed at how the Big Papi by David Ortiz healed itself. I was in deep fear that the early cracks might continue throughout the cigar. Didn’t do that. And the char line is nothing short of impeccable.

I don’t know whose idea it was to keep the Big Papi affordable; like any other boutique blend…but that was smart. The cigar has a great chance of attaining good word of mouth and becoming very popular. And unlike so many celebrity cigars that end up going for $4 on Cbid this doesn’t seem to be the fate of the Big Papi by David Ortiz.

The cigar creates a luscious smoothness to the end. No harshness.
Final smoke time is one hour 50 minutes.
Definitely get some.

Come on…What is the most highly regarded guitar solo in rock history? (Remember: This is not my opinion but the opinion of the greatest guitarists in the world and the top echelon of professional music reviewers.)
Name the band, the song title, and the guitarist. Hint: Brit band.
To my musician readers…if you don’t know this…Shame. 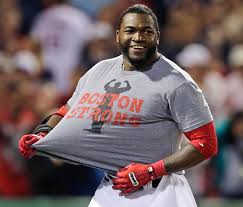 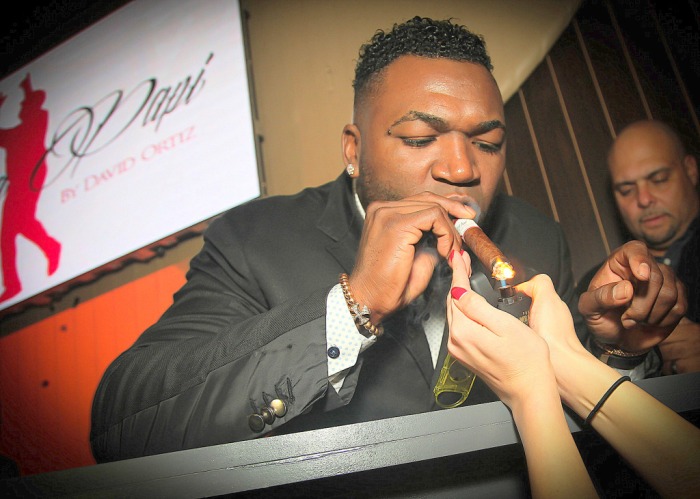 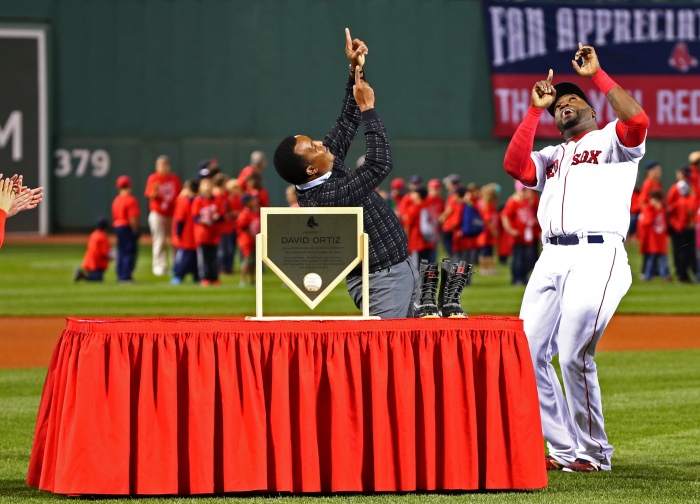