Today we take a look at the Arturo Fuente Don Carlos Personal Reserve Robusto.
Thanks to a reader for the cigar.
I’ve smoked most of the Fuente blends. Early on, I discovered the Don Carlos and it became my all-time favorite Fuente blend. So, in spite of the price, I have high hopes.
AND…you don’t have to listen to me piss and moan about a $22 cigar. Win/Win.

From Cigar Aficionado (9-30-2015):
“If you haven’t been lucky enough to try a cigar from Carlos Fuente Sr.’s personal stash, you might get your chance soon. In celebration of his 80th birthday this year, the Arturo Fuente company patriarch has released his private blend to the public under the brand name Don Carlos Personal Reserve, and they should be reaching cigar stores around the holidays.

“It’s a slightly adjusted version of the commercially available Don Carlos blend, although altered to Fuente’s personal taste. Boxes of the Don Carlos Personal Reserve cigars are sitting in Fuente’s Tampa warehouse waiting to be staggered into the market.

“Each generation of the Fuente family has created their own blend,” explained Sam Mendez, general manager of the Fuente cigar factory in the Dominican Republic. “The founder, Arturo Fuente’s personal cigar was a 6 inch by 47 ring corona gorda. The Fuente family started producing it commercially in his honor as the Flor Fina 8-5-8. Of course the Fuente Fuente OpusX is Carlos Fuente Jr.’s personal blend. But Carlos Fuente Sr.’s personal cigar is the Don Carlos Robusto. He continued to secretly tweak the blend, but only for his personal use.”

“The Don Carlos Personal Reserve comes in a 5 inch by 50 ring Robusto with a suggested retail price of $14. A box-pressed belicoso called the Don Carlos Eye of the Shark ($11.95), measuring 5 3/4 by 52 will also be released around the same time. The Robustos come packaged in glossy black boxes and feature an all-Dominican blend save for the wrapper, which comes from Cameroon. The Eye of the Shark however, comes in glossy red boxes and the company is not yet disclosing the particulars of the blend.

“In addition to the Carlos Fuente Sr.’s 80th birthday, this year also marks the 30th anniversary of the Don Carlos brand.”

DESCRIPTION:
First thing I notice is the smattering of roller’s glue all over the cigar. It glistens in the light.
The cigar construction is rustic…to be kind.
The oily wrapper is a chocolate/hickory hue. Very toothy.
The triple cap is a bit sloppy.
The gorgeous part of the cigar is the double cigar bands.
The cigar is solid without soft spots. 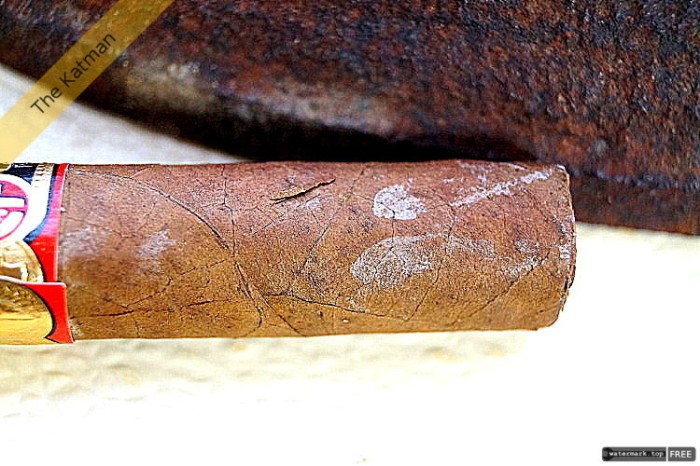 FIRST THIRD:
I saw two of the Big Guy reviews and they were diametrically opposed. One gave the cigar a low score while the other gave it a high score. Go figure. So I have no idea what I’m in for.
The draw is a tad tight.

Strength is an immediate medium body. Based on its early impression, it will take no time before this blend is full strength. And I’m wearing a swim cap floating downstream from the nicotine.

Char line is good. But then why wouldn’t it be? It is not a box press.

I must be honest. I am not a Fuente fan. I am not sure what it is. Too many mild bodied blends? Not flavorful enough? Overrated? Of course, Fuente comes in all sizes and blends. What’s not to like in an Opus X? Yet, the main Fuente line leaves me unmoved.

The char line is dead nuts:

I look at the clock and realize the Don Carlos Personal Reserve is smoking faster than I anticipated. It feels fully stocked with tobaccy but…

SECOND THIRD:
Smoke time is a bit over 20 minutes.
Flavors, again, make a surge. Instead of gradations of flavor improvement, they happen in blocks. Not a smooth transition even though the blend increases in its potential for wider possibilities.
One thing cannot be ignored…this funky looking cigar has impeccable construction when it comes to the burn. This ash just won’t go away with a razor sharp edge.

I should be saying WOW by now…I’m not. Flavors are good but not great. That “block” method of flavor transitions is frustrating. And the flavor profile is not expanding at the speed I’d prefer.

Here we go again…give a blend a fancy name, make it a limited edition, make it expensive (You can still buy them – what does that say?), and they will come. Well, apparently, they didn’t come or there would be still be Don Carlos Personal Reserve cigars for sale.

Halfway point. Man, that seems to have jumped on me quickly.
Smoke time is 35 minutes.

The red pepper makes a leap over the Grand Canyon. It gives the cigar a blast of oomph it sorely needed.
This seems to have kick started the blend. The main profile emphasis is back on track and moving slowly…at last. No blocks…just gentle transitions.

Funny thing…the first box of cigars I bought legally at age 18 was Fuentes. I paid $40. I thought that was a lot of dough. I’d sit in the common area at college and smoke one between classes. I thought it made me look cool. Couldn’t figure out why not a single chick would come near. 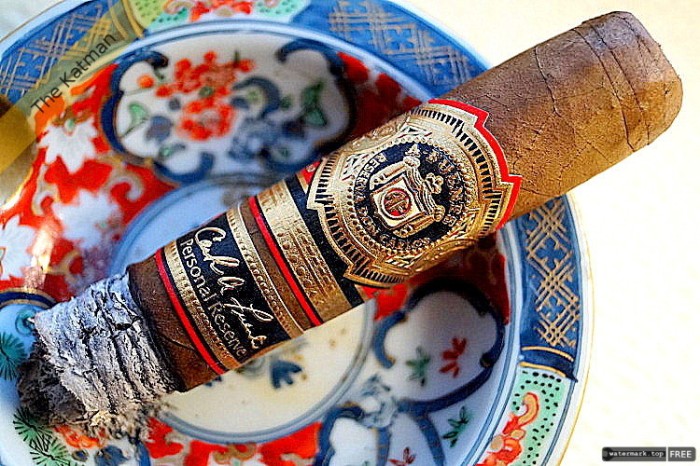 I should be singing the praises by now of the Don Carlos Personal Reserve.
I’m not.

Maybe I just outgrew Fuente. Or maybe it’s due to me not being a fan of Dominican tobacco. I find that most Dom puros, which this isn’t, to be bland. Exceptions? Of course.

At this point in time, if I had blind tasted this cigar, I’d guess it was a $7 catalog blend.

And now for my rants and raves….15 fucking dollars? No way, Moshe Pipic.
Another blend using its iconic name to fuck the customer. And I’m not singing a Simon & Garfunkel song.
Where is the pizazz? The bold flavors? Consistency? Where is the complexity?? Transitions are now minor, at best.
I realize the first review I read, that gave the Don Carlos Personal Reserve a lower rating than I had expected…was dead nuts right.

This is not the best coming from the Fuente family. And if this is the blend from Carlos Sr.’s stash, I’ll eat my cat. (Sammy is sitting on top of the chair where I sit and write. He saw what I was typing and next thing I know…feets don’t fail me now. Gone.)

Since I’m not really doing anything at the moment, I’d like to thank all the readers that have sent me holiday greetings. I do appreciate that. I like hearing from readers. Then I write something that they hadn’t expected…like me being me…and they realize…”Holy Bat Shit. He is like how he reviews…all the time!” I scare off some of these folks.

LAST THIRD:
Smoke time is 50 minutes.
Damn. Sonovabitch. I had high hopes. Only to be dashed on the rocks below. I expected to have a contender. Nope.

It’s not a bad cigar. It just doesn’t wow me like it did at the start.

The Don Carlos Personal Reserve has become like a flatulent old man…like Bryan Kinnaman. I talk to him on the phone and all I hear is: “Excuse me, excuse me…” Thank God Smell-O-Vison hasn’t been invented.

Transitions are dead on arrival. There hasn’t been any complexity to speak of. And what flavors are left are drab and uninspiring.
Another rip off from a big manufacturer so greedy that they will fuck their customers in the arse without giving it a thought. (“Don’t worry. They’ll be back.”) 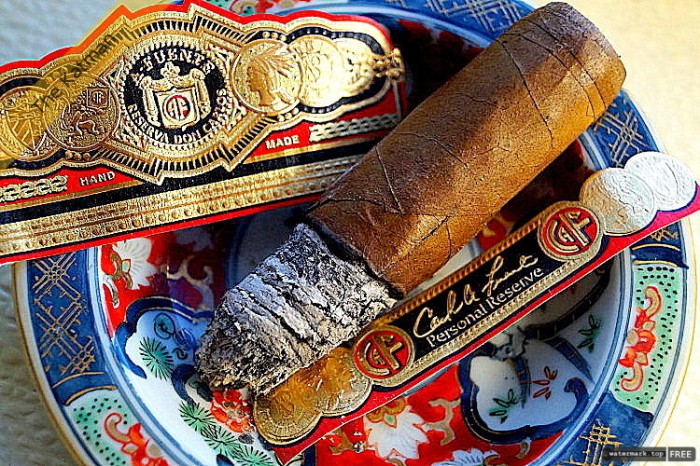 Another new blast of red pepper. So far, the only consistent element to this blend. I love spiciness. (Have I mentioned that before?)

I have been blessed to have had the chance to review some great cigars lately only to be interrupted by this thing.
I’m trying to use the 8 days left before the end of the year to smoke cigars that have a chance to make my top 25 list.

Strength never got above medium body.

Flavors are a mish mosh of unidentifiable elements. Not a lick of complexity. Transitions. What transitions? And most importantly, no depth of character.
Maybe the blend needs a year of humidor time. I have no idea. But then the reviews I read took place not long after the cigar was released. So that can’t be it.

The cigar has now become a liability to my time and effort. No point in going any further.
Never, never buy this cigar. The price point alone is reason enough.