Villiger 1888 | Cigar Reviews by the Katman 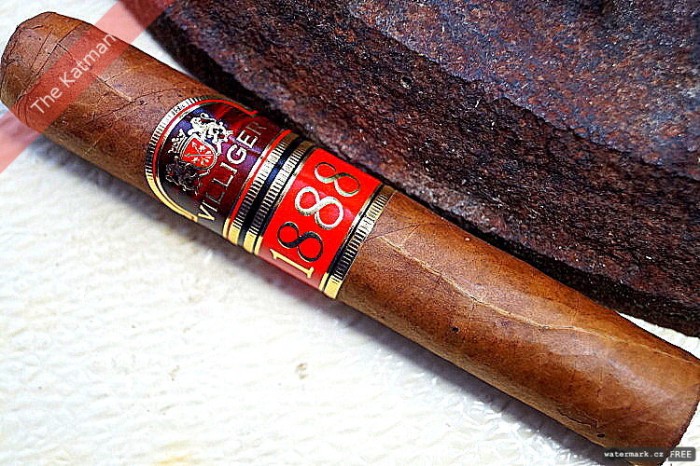 Today we take a look at the new Villiger 1888.
I’ve added Part 2 of the Stewart Copeland story I began in the Flor de las Antillas Maduro review from yesterday.

BACKGROUND:
From the Villiger Cigars web site:
“The Villiger 1888 blend is a complex and elegant cigar that was part of a 2010 limited edition production, which celebrated Villiger’s 100 year anniversary in Germany. Made in the Dominican Republic, the 1888 features an Ecuadorian wrapper, Mexican binder, Dominican and Nicaraguan fillers. One can expect Dried fruit, roasted coffee and caramel notes, fortified with a peppery and floral finish.”

DESCRIPTION:
For an inexpensive cigar, it is a solid packed baby. No hard or soft spots.
The wrapper has an oily chocolate/pecan color. A couple of huge veins but that’s about it. Seams are invisible. The triple cap isn’t all it can be. And the wrapper is smooth, baby, smooth.

I tried finding this stick online but then read that this is a revamped cigar for 2017 with a new band and secondary band. The online stores I found selling the cigar by the same name have the old look. I’m not sure where you can buy this new stick as I Googled the shit out of it and kept finding the old look. Maybe your B&M has it. At least, ask.

From the clipped cap and the foot, I can smell red pepper, chocolate, floral notes, caramel, cinnamon, nutmeg, fruit, and malts.

FIRST THIRD:
The draw is decent. But it doesn’t start with a bang. Flavors are minimal but we have a long way to go.
A couple minutes in, the Villiger 1888 begins to blossom. I can taste extreme creaminess, an array of malts, chocolate, wonderful floral notes, espresso, cinnamon, red pepper, and black licorice.
OK. Now we’re kickin’ it.

With less than half an inch burned, the Villiger 1888 blossoms exponentially.

I had two. I tried one after a few weeks of humi time. No good. This one has about two months of rest and I’m being treated to the blender’s intent. Patience, my children, patience. None of that ROTT bullshit.
I actually found a couple reviews, by respected reviewers, that liked this blend as well.
I like that the cigar feels heavy in the hand. And now the draw is flawless.

A large wrapper crack appears near the foot. I’ve had this issue with almost everything I smoke due to cold weather. I take a cigar out of the nice comfy warm humidor…and within minutes, I get some sort of crack because I must open the two windows enough to let the smoke out. The 11° comes rushing in and no matter where I put the cigar, it gets walloped from shock. I don’t know what to do. Maybe, hope summer comes soon?

Meanwhile, the ash is hanging tough.
While I enjoy the flavor profile, there aren’t significant transitions and no sign of complexity. I’m beginning to think that the Villiger 1888 is merely a good knock around stick.

SECOND THIRD:
Smoke time is 25 minutes.
Flavors are intact. Nice variation but still no transitions. And no complexity.

And then badda boom…creaminess re-engages and leads the pack; followed by dark chocolate and black pepper. The nutmeg is gone. So is the caramel.
The black coffee is chooglin’. And there is a sweetness that is made up of dried fruit, candy orange slices, and cinnamon toast.

The malts kick into gear. This rounds out the blend nicely just as transitions begin. Plus a little dose of complexity. Maybe just one of those blends that needs the first third to warm up. Go figure.
I’ve burned past the wrapper cracks. All is good in the Land of Oz now.

I watched an hour long special on the history of music recording innovations on the National Geographic channel last night. It was fun to watch except that they fucked up a lot of information by not doing their research. They got a lot of facts wrong. A shame. I didn’t last the whole hour. One thing that bothered me is that they kept referring to EMI (Abbey Road) Studios as using a 4 track for The Beatles. That was later. In the beginning, they only had a “3 track recording system.” I saw it in person while living there. That’s a big deal to fuck up on.

The char line is on point.
Strength remains at a steady medium.

This is my first cigar of the day and therefore, should be blasting away at my palate with all sorts of goodies. It ain’t. I’m getting the feeling that should this be your 3rd cigar of the day, your palate will be a little crispy and you will miss out on the subtle flavors that the Villiger 1888 has to offer.

For an inexpensive cigar, the construction has been top notch. Not a single char line issue. Nice ash.

Halfway point and I’m in for 35 minutes.
Crap. Too much glue on the cigar band. I thought it was a two parter but it isn’t.

The Villiger 1888 finally kicks in and shows what it’s got. Finally.
Transitions occur. Complexity has joined the circus.

Maybe the blend needs more time than I gave it. Could be old school blending where the stick needs months of rest, not 2 months. Maybe, I’m experiencing, at the halfway point, what it will taste like from the start in a couple more months.

The malts spread out. Caramel returns. The fruitiness is in play. So is the creaminess, coffee, chocolate, cinnamon, floral notes, black licorice, and cedar.
Now I’m happy.

It must be about humidor time.
Strength pushes to medium/full. 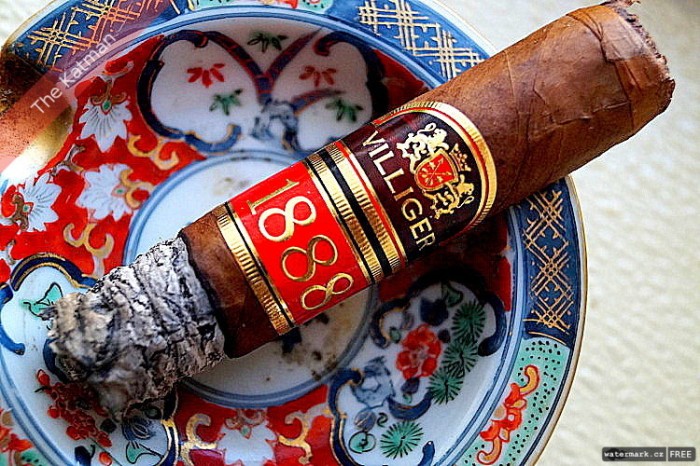 Like a flicked light switch, the Villiger 1888 comes to life. “It’s alive! It’s alive!”
I had given up til just a couple minutes ago. Now the blend is screaming laughter.
Transitions are quick and dirty. Complexity is piling up.

Deep Purple is playing on the tube’s music channel. In Italy, Curved Air supported them on tour for a few days. One late night, we all got into the swimming pool at the hotel. Someone called the cops and told them a bunch of naked women were swimming in the hotel’s pool. The cops came and then asked for autographs.

The Villiger 1888 is a very pleasant cigar. Not a barnstormer, but for the dough, it is spot on.
I’m enjoying the cigar a lot more than I did at the start.

Yet, there is nothing really special about this blend. There are plenty of catalog cigars in this price range just as good…so it sort of melts into the crowd. Too bad because if I had my druthers, I’d pick a blend from “The Katman’s List of 167 Great Cigars in the $5.00-$8.00 Range.” 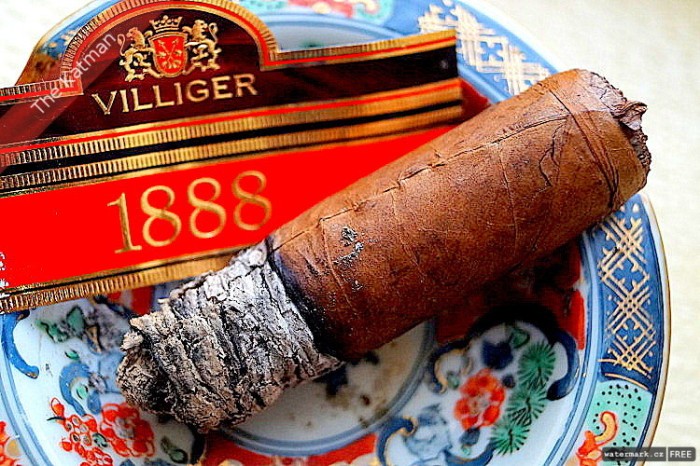 I can only half-heartedly recommend the Villiger 1888. Its blend just melts away into the category of everyday sticks. Not bad. But not great.

My only caveat is that if you buy this cigar, put it away and forget about it, this blend may turn out to be much better.
Final smoke time is one hour 10 minutes.