Pepperbox | Cigar Reviews by the Katman

Today we take a look at the Pepperbox by Plasencia only from JR Cigar.

BACKGROUND:
Only one written review and a few video reviews available for this blend. My friend, Aaron, sent me a couple samples. He got impatient and tried them soon after he received them. He did not like the cigar at all. This gave me the heads up that this stick(s) need plenty of humidor time…I only allowed for 5 weeks humidor time before I tried my first stick and was mildly impressed with the decent, simple flavors. Now, it’s two weeks later and the cigar package has 7 weeks of humi time….Voila. Something…Hopefully…worth writing about.

Only sold only in 10 count boxes. No singles or 5 packs.

From the JR Cigar web site:
“On the heels of our enormously popular Shock and Awe Cigars the legendary Plasencia Company has once again, stepped outside of their comfort zone to create another one of a kind offering .
“Named for both its spicy kick and a historical multi-barreled handgun, the new Pepperbox is not just a cigar, it’s actually four cigars in one!

“Beneath a rich Nicaraguan wrapper are four individually square-pressed cigars, each with its own unique blend. Featuring a hearty reddish-brown Habano leaf wrapper from Nicaragua. The secret Pepperbox recipe also includes the finest, well-aged Central American binder and filler leaf from Honduras and Mexico. Thanks to Nestor and his talented gang, you can quadruple your smoking pleasure with the multi-flavored Pepperbox cigars.”

FIRST HALF:
The first one I smoked required some Kama Sutra techniques to get the cigar to: 1) Burn evenly, 2) Keep the wrapper from coming loose, 3) For the first time, learning how to make my lips fully engulf the entire shaft 1-1/2” past the cap to make sure the draw worked correctly; forcing the four box pressed sticks to press together…eliminating air from getting between the little baby sticks. (Are you hot yet?).

Aaron buys his sticks from JR. He has sent me a couple here and a couple there. More than half of them, I’ve reviewed. I never bought from JR except for the recently reviewed 601 Gold which was a big disappointment…sort of 601 Lite. But I really need to give more credence to JR for some of their house blends. Even a horrible cigar snob like me has found some to great go-to sticks from JR.

Anyway…my stripper pole is greased up and I’m ready to smoke.

The aromas I glean from the Pepperbox are very strong peppers, some sweet components, a little coffee and chocolate, graham cracker, and charred meat.

Cutting the cap is dangerous to the health of the cigar concoction. I use a straight cut carefully avoiding removing anything but the thin wrapper. The ends of the four sticks are untouched and line up perfectly.

The draw is excellent. The interior four sticks are burning evenly. But once again, I must keep kvetching at myself into rememberingI have to glom on to the cap with my lips much further down the shaft than I normally do with a regular cigar…in order to close the minute gaps between the little sticks.
In fact, I use my teeth to clamp down on the cap and it works perfectly…shaft is filled sufficiently so as to let your teeth just rest on it without damaging the wrapper.

It ain’t called the Pepperbox for nuttin’ honey. I get a second massive blast of red and black peppers that clears my sinuses and makes my eyes water. I love it. Spice junkie.

Along with the pepper, some nice flavors of creaminess, molasses, espresso, milk chocolate, almonds, cedar, and cinnamon oatmeal.

Clearly, the extra two weeks on top of the original 5 weeks of rest have had a big influence on the flavor profile.

Strength is a potent medium.

Despite what one expects going into this oddity, the burn is even.
Smoke fills the room and my cat skedaddles.
Half an inch in, the chocolate reigns supreme…as well as a bevy of malt influences. The creaminess is a nice counterpoint especially with the very influential spiciness.

The Pepperbox by Plasencia is on a slow roll. Transitions begin. Complexity peeks around the corner. The finish is chewy and long. We are on the right path, my son.
What seems to have started as a joke, or a gimmick, is proving to be a total smiley face surprise.

The Pepperbox is very smooth and polished. An urbane quality if you like….actually, you could give a shit if you want.

While the option is available to tear the wrapper off the four little sticks, I wouldn’t do that. This baby was meant to smoke unabridged. You can get cigarillos anywhere, anytime.

The spiciness, while ever present, has relented a bit and now makes a perfect back drop for other elements. Transitions are not fooling around. Each puff is like opening a new box of Cracker Jack and finding a different prize.

I’m not adamant about the complexity. It seems to tease. But the flavor profile does not.
My mouth and palate are awash in pleasant piquancy and good vibrations, Rhonda.

I am really impressed with construction. I expected a real mess with the burn yet it has only needed a single minor touch up.

Malts are beginning to be an essential quality that accompanies the chocolate, coffee, cinnamon, spiciness, creaminess, molasses, with a slight touch of citrus.

I’ve burned over an inch and the large ash stays in place.

The Pepperbox by Plasencia begins to have several influences: Mexican mole sauce that includes a nice dose of cumin and garlic…and it also trampolines indications of rich espresso and Indian curry.
So I’m telling you Aaron, rest is the answer to the question of why barnyard and hay and WTF??

And the complexity kicks in. I wasn’t expecting that. This $7 semi-gimmick stick is actually a fine example of blending at its most serious.

SECOND HALF:
Smoke time is 40 minutes.

I’ve now entered the Sweet Spot zone. Bursting with interesting and ever changing flavors, the Pepperbox by Plasencia impresses the shit out of me.
Just don’t smoke one ROTT…or anytime sooner than two months.
I nearly managed to get the 2” worth of ash to stay in place but in the course of taking a photo, it disengaged from the mother ship. 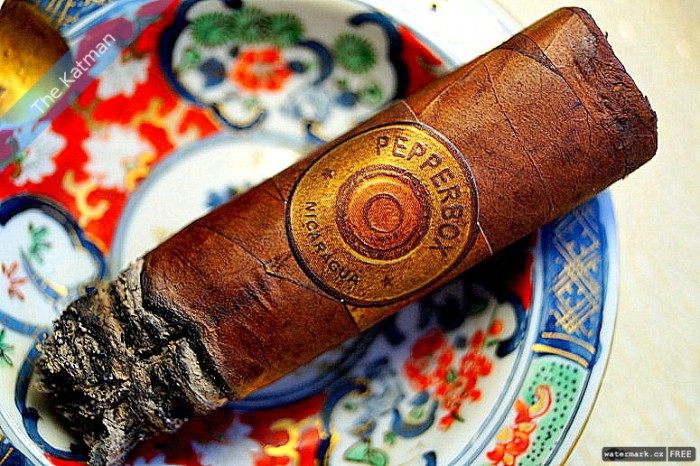 Strength reaches the full-on steady as she goes mark.

The spiciness returns with extreme prejudice. I can feel the burn in the back of my throat and tongue.
Honestly, I thought I would either not review this cigar or give it a spanking. Brava to the Plasencia clan. They took something silly and turned it into an excellent blend. Which is more than I can say for manufacturers like Lost & Found, etc. You know what I’m talking about…gimmick the shit out of the packaging and presentation, charge too much, and deliver a mediocre blend.

I’m also impressed with the construction. Taking four 4 x 32 sticks and wrapping them together in an overlapping wrapper seems destined for trouble. Yet it has given me no grief. The burn is consistent. No serious char line issues.

I read JR’s Blending Room review and the writer said that when measured, the ring gauge is actually 64, not 60…just sayin’.

Then Moses parts the Red Sea…flavors burst into flavor bomb territory. No shit.
I’ve restrained myself from over using that term but it is a perfect fit for the Pepperbox’s second half.

This blend could easily disguise itself as a $12+ cigar. It’s that good. (Remember: 2 months of humidor time…no cheating.)

I could smoke the Pepperbox by Plasencia all day long. To save dough on this $7 stick, you can smoke each individual 4 x 32 stick separately but I’m pretty sure the delicious flavors are derived from the combination of all four sticks working in harmony.

I hope I’m not jinxing it…but so far…no nicotine buzz.

The Pepperbox is very strong now. Remember when the 601 La Bomba was considered one of the strongest cigars on the market? The Pepperbox surpasses the old blend. Since they changed up the blend on the La Bomba, it’s a shadow of its old self.

I’m delighted that I was able to present a positive rant about the Pepperbox by Plasencia…especially due to its price point.

I highly recommend you give the Pepperbox a try. Unfortunately, buying a 10 count bundle is the only way it is sold. So you do have to invest $68.40. But believe me, it’s worth it.

The Pepperbox is a faux gimmick that works on all levels. An absolute killer blend that finishes big. Overwhelming array of flavors and character. Deep transitions and complexity. A mile long finish. You will thank your Uncle Katman on this suggestion.