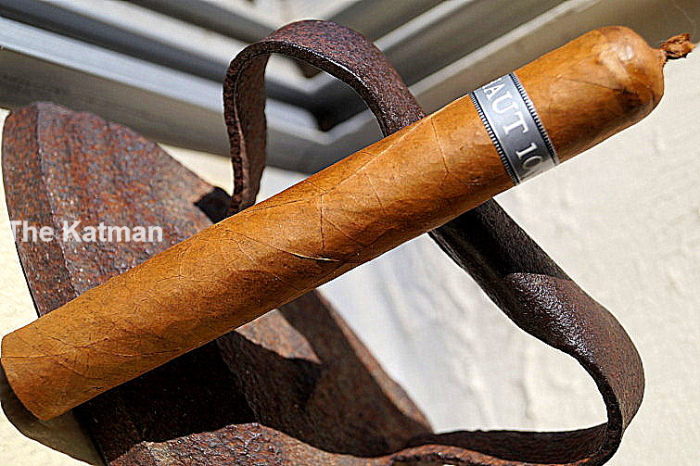 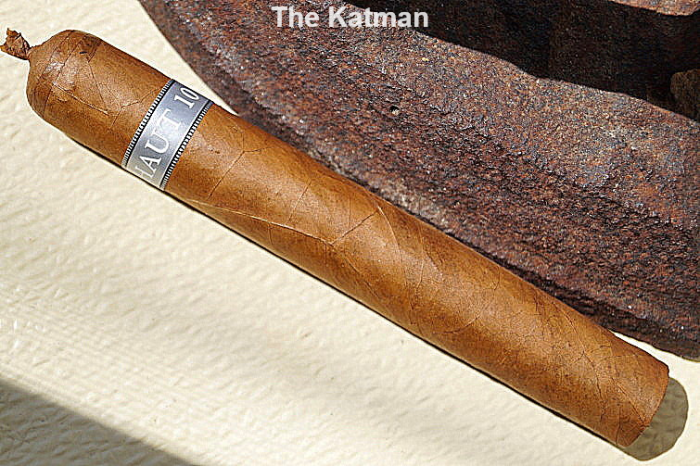 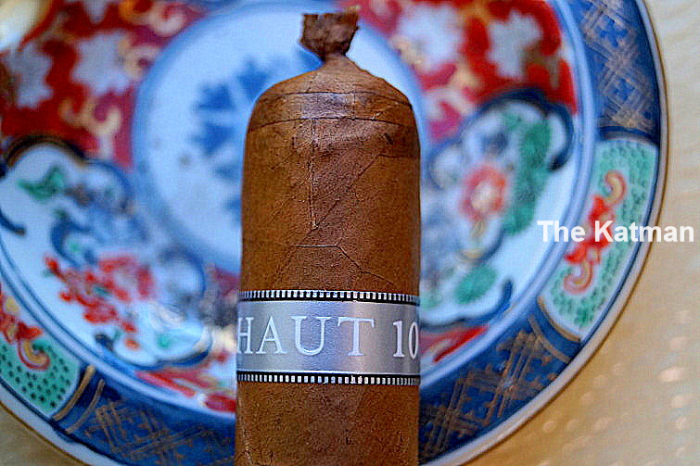 Today we take a look at the Illusione Haut 10.

According to Halfwheel.com:
“For the 10th anniversary of Illusione, Giolito created Haut 10, a 5 1/2 x 52 robusto extra that uses a Nicaraguan cafe claro AAA grade wrapper that sits on a blend of Nicaraguan criollo 98 and corojo 99 tobaccos that is “seco dominant.” He noted that the blend came as the result of three sortings to get the best materials from AGANORSA.

“The cigar debuted at the 2016 IPCPR Convention & Trade Show with a limited amount making its way to retailers ahead of the Aug. 8 deadline to have cigars on shelves without needing FDA approval and due to limited supplies of all of the new products. As with many if not all of Illusione’s releases, the box features some simple but distinctive imagery; in this case it’s the Great Pyramid that serves as inspiration.”

DESCRIPTION:
The oily wrapper is the color of gingerbread and caramel. Seams are invisible. The stick, after over two months of humidor time, is harder than I would like. Veins are in abundance. A nicely applied triple cap with a pigtail atop it.

AROMAS AND COLD DRAW POINTS:
From the shaft, I can smell very little, actually. There are slight hints of cedar, some generic sweetness, bits of chocolate, espresso, cream, a dash of floral, and black pepper.

From the start, the Haut 10 has the qualities of making your heart skip a beat. There is that magical moment when you discover you are smoking one fine cigar…and this moment comes early on.
The char line is dead nuts.

Half an inch in, complexity begins its journey accompanied by a nice long finish and some impressive transitions.
I’ve had a variety of experiences with Illusione. Some have made me genuflect in front of an altar dedicated to Dion Giolito. Others…not so much. And the Illusione brand rarely puts out a new blend under $10.

The black pepper is lethal. Yet, it cannot disfigure the emerging flavor buds emitting from this blend.
The roasted nuts, creaminess, honey, and coffee are swinging for the cheap seats and connecting.

I’ve had the cigar for a little over 2 months which apparently is all it needs to shine.
This is a quality blend kicking most other new blends to the curb. As you already know, most anniversary blends are all hooey. I’ve rarely had one that made me pop up and twirl my head like a ground hog.

I’ve read a few earlier reviews of the Illusione Haut 10 and everyone loves this bunch of tobacco turned into a love sausage for the mouth. I know this sounds dirty but it was not my intent.

Flavors are piling up like a car crash scene in the “Blues Brothers.”
Strength is a solid medium.

The Haut 10 is one of those too few blends that cause you to involuntarily smack your lips like your favorite dog to maximize flavor input…except I don’t poop in the yard…well, not that often.

Each puff brings solace and world peace to the world surrounding me. I am in such a good place that I want to board a plane to North Korea, get captured, detained, and put in prison for 20 years. Nice. Now that’s a good cigar experience. 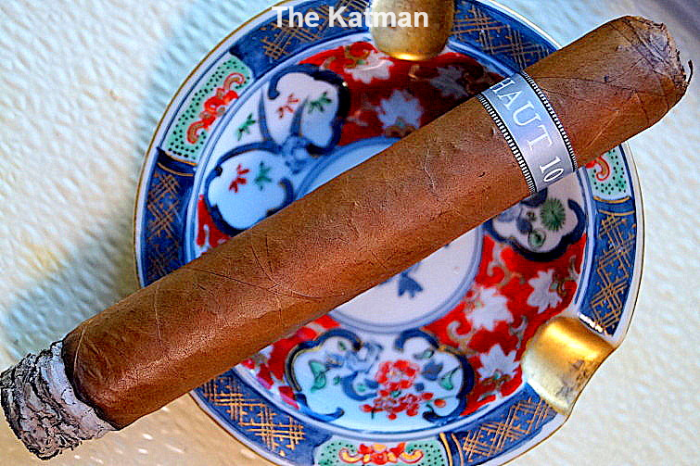 I overuse these words but subtlety and nuance mesh perfectly with the over the ever expanding big flavor profile.

Malts. I left those out. What was I thinking? A nice list of various elements…like: Brown malt, Cara Munich, Coffee malt, and Flaked Rye. (See Malt Chart).

The stick is filled perfectly by rollers that get paid the most. Not a single construction issue with a perfect char line. Dead nuts, baby. And it’s a gorgeous slow roll of a smoke…no hurry; taking its time…like a good boy should.

I reviewed the Garagiste and wasn’t as impressed as Cigar Aficionado. Other reviewers felt the same way as it averaged cigar ratings of 87-91. Not exactly bursting with excitement over that blend.
Now the Haut 10 is a different animal. All hail Dion Giolito for putting his heart and passion into this blend.

As I’ve already smoked a previous stick to determine if it was ready for review, I know this blend will continue to climb the rock face with exceedingly good balance and character. There is no turning back now.

This is one of those cigars that fellas without pinpoint palates will declare their undying love…they don’t know why but they know what they love. One doesn’t need a super developed palate to experience a sensory masterpiece of this journeyman’s mastery of blending techniques.

Yeah, I know the price is ridiculous. $16.00. This typical pricing of newly released blends is putting me out of business. I’m a senior citizen living through his golden years on a fixed income. But I tell ya’ what…so far, I’m willing to spend a couple bucks to procure a couple more Haut 10’s. It’s that good. And I rarely, if ever, bless a cigar blend at this price point.

SECOND THIRD:
Thank goodness this is such a well-made cigar. Smoke time has been 40 minutes. A leisurely 15 hour Kama Sutra induced sex romp like Sting claims to have. He must have continuous shipments of Cialis made to his house every month.

The strength hunkers down with an increase to medium/full.

Here we go: Coffee, roasted nuts, creaminess, black pepper, honey, vanilla bean, malts, a non-descript fruitiness, a dollop of cedar, and a touch of chocolate around the edges.

The black pepper rests at the back of my throat creating a bit of raspiness as I sigh from pure gratification. In fact, I am making the same sound I make when my cat attacks me in the middle of the night because he just ate, pooped, and is ready for action.
I’m pretty sure that last statement was just another acid flashback coming to the forefront.

Transitions have made quite the impact. I recently reviewed the Isabela Cigars Time Traveler which had 8 separate flavor acts. The Haut 10 is creating a similar experience with a constant changing of the guard. In other words, it is impossible to know what’s coming next as the blend mixes things up every few minutes.
Damn.

Complexity is discharged with adoration of the palate as its goal. You don’t need to know shit about flavors to understand that the Illusione Haut 10 is a major accomplishment.

I know I will be ridiculed by this next statement but I can’t think of a Cuban as good, or better, than the Haut 10. I know…a bold and reckless statement. Cuban aficionados please send your disgruntled remarks via Pony Express or homing pigeon.

The initial description of flavors remains intact without depravation or loss.

The char line requires its first touch up.

It’s taken one hour+ to reach the halfway point and I’m having as much fun as one can have with their clothes on.
Strength is about to move from medium/full to full.
I read in a couple reviews that the black pepper faded on them about now. So far, I’m lucky. I’ve still got that raspy spiciness resting comfortably in the back of my throat. 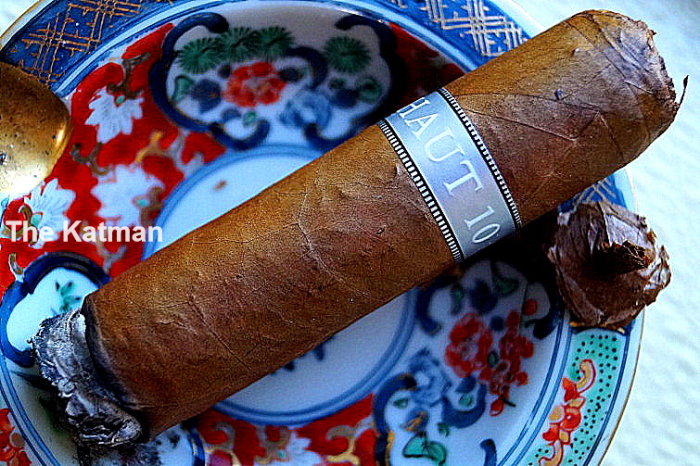 A sip of water is followed by a flavor explosion.

The flavors have transcended the ordinary to become supernatural. No longer are flavors separate and clearly identifiable. They have meshed into a stew of epic diversity. Now and again, something darts past my palate causing synapses in my brain to brighten and act like snapping turtles.

I had a guinea pig as a kid and one day the little bugger bit my forearm and wouldn’t let go…so I ran around my room, screaming like a little girl, swinging my arm as I tried to dislodge its teeth. The adrenaline rush was the cause of my near fatal skydiving accident 40 years later.
The above statement is meant for those reading this in a mental health institution.

I’m ruined for the rest of the day. I’ve written my suicide note with several riders attached that clearly disseminate how I want my head to be cryogenically frozen so I can come back in 2269 and check out how Illusione is doing in the future. I just hope they don’t attach my noggin to a chimp or an iguana.

It’s been a while since I’ve experienced such a complete phantasm of complexity and character.

LAST THIRD:
Smoke time is one hour 25 minutes.
Another fix of the burn line is required.

Strength puts its foot down and reaches the full demeanor of intensity found in many Illusione blends.
$16 is a lot of dough for a single cigar. And that’s online. I’ve heard of guys being forced to pay as much as $20 in B&M’s.
But the Illusione Haut 10 is the real deal. A manifestation of ingenious blending techniques. This is a serious cigar.

I’ve hit a major sweet spot. I honestly didn’t conceive that the Haut 10 could become any better than the first two thirds yet it has proven me wrong by illuminating the true blender’s intent in the last third.

Cigar Aficionado has not reviewed this cigar. I’m curious to see how they will rate it. What I don’t understand is that this stick has been out for a while and should have been included in its 2016 rating series. Based on the cigars I smoked in 2016, I would have put the Haut 10 in my top 25 list for 2016. CA seems to have completely ignored this stunning blend. Yet, if you take a look at their list, it is full of the same brands that always make the list. Some that, in my opinion, have no business being there.

If you haven’t tried the Illusione Haut 10 then you must steal money from your wife’s purse and purchase a couple.

Again, one complaint from some reviewers is the disappearance of black pepper in the last third. Not happening in my cloistered world. The spiciness is bold and beautiful.

I will proceed to jinx this experience by claiming that even though the cigar is pumping away on all 8 cylinders, not a lick of nicotine.
Then my description goes awry and I become light headed. I’m such a schmuck.

I haven’t a single criticism. It is about as perfect a blend as they come. The intense long finish should last all day as long as I don’t eat.

As the Illusione Haut 10 slips away into the ether, I’m very happy about the consistency and character of this blend.

Dion Giolito really out-finessed himself with this magnificent creation.