Habano Esteli by Lucky Cigar | Cigar Reviews by the Katman 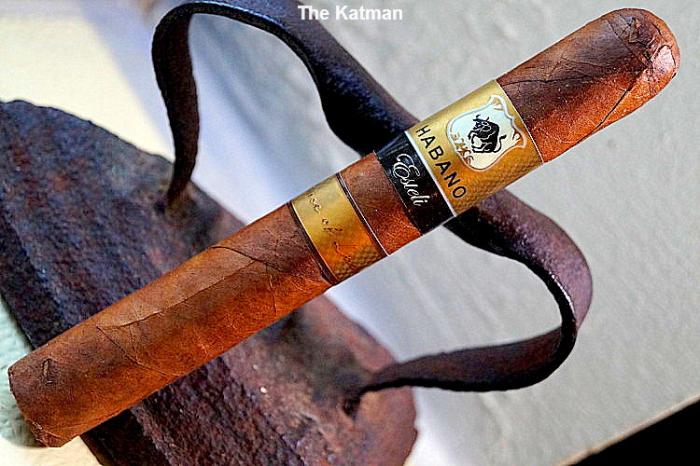 Today we take a look at the Habano Esteli by Lucky Cigar.
I bought my sticks directly from Lucky Cigar.

BACKGROUND:
From The House of Lucky Cigar web site:

“The Habano Esteli is medium bodied with a complex mixture of long-leaf tobaccos from Nicaragua’s world famous growing regions such as Jalapa, Esteli, and Condega. Handmade in Nicaragua.

DESCRIPTION:
Not a bad looking stick. It’s not going to win any awards in a beauty contest. I love the shiny smooth caramel and penny hued wrapper. Seams are visible. Some large veins but not obtrusive. The stick is on the soft side. It’s a bitch trying to dry box here in SE Wisconsin during the hot sticky summers. Humidity inside my humidor is less than the humidity in the room’s air. Still, it feels like the stick might be under filled.

From the clipped cap and the foot, I can smell salted caramel, chocolate, red pepper, cream, a very mineral component emanating from the foot, cinnamon, malt, and mint.

FIRST THIRD:
The draw is free and clear…in fact a bit wispy and reedy. I was right. The cigar is under packed. This should be a quick smoke.

I’m impressed. But then I was impressed with the first stick I smoked from all 3 blends I bought: Habano Esteli, Especial Maduro, and Especial Habano.

I have no recollection as to how I found out about this company. Must have been a stray email. Spit ballin’.

But I am duly impressed with the bevy of products available from The House of Lucky Cigar and at such reasonable price points. Based on what I’ve smoked, I would have guessed these are $10 sticks.

Complexity kicks in at only ½” smoked. Transitions are abundant. And there is a devastatingly long finish. If the Habano Esteli can keep this up, it’s going to score big in spite of my criticism of an under filled cigar. 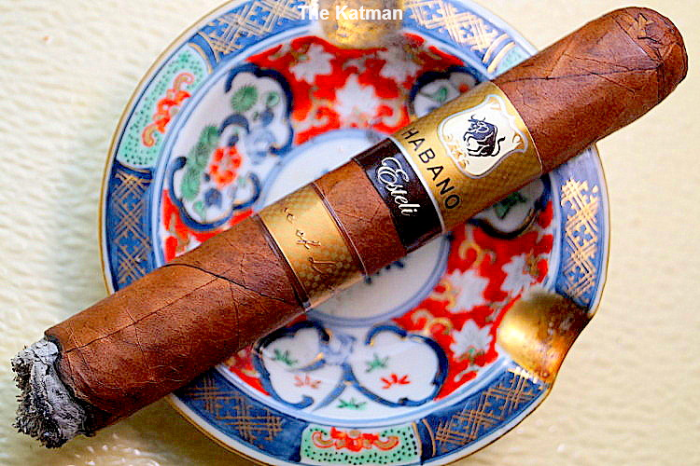 Torano, the king of the $5-$6 stick should be ashamed. Here Lucky Cigar is cranking out blends that are tasty, complex, and reek of boutique brand passion…and doing it for the same price as those crappy Torano blends.

The creaminess is just so decadent that it syncs up the experience of shoving your face into a bowl of homemade whipped cream…and inhaling.

I just now noticed that the strength is only barely medium. It is such a flavorful cigar that strength becomes irrelevant.

The bottom half of the cigar is beginning to become a bit spongy. Damn. I knew it was too good to be true. Here we have an incredibly tasty blend and they opted out of using good rollers…hence the low price.

Normally, it is the other way around. Good construction, mediocre cigar with flavors only of leather, earth, and wood with a dash of cocoa.

Strength begins to rise from the ashes and shows a dab of something stronger lurking in the immediate future.

This baby is cranking smoke like a house a’ fire.

Flavors are super complex. If any cigar will make you smack your lips to elongate the presence of a delicious finish, this is the one. I’m having as much fun behaving like Jerry Mahoney as I am smoking the cigar.

Strength has just moved on up to medium/full. The red pepper becomes a very potent black pepper.

Smooth doesn’t begin to describe how this cigar goes down.

Surprisingly, I’ve needed only a single touch up to the char line.

For the dough, even putting up with the less than stellar construction, this is a great deal on what could have been a $10-$12 blend. Its flavor profile matches that of some of the finest blends I’ve reviewed.

October in Wisconsin is the month of reckoning…the start of winter. The heat and humidity will disappear…allowing me to correctly dry box my review cigars. I believe the Habano Esteli by Lucky Cigar would do much better if allowed to divest itself of some of the intense humidity we are experiencing.

Construction is going to force the Habano Esteli to take a hit when it comes time to rate it. There will be a dichotomy put into play of construction vs. flavor. Flavor will suffer.

Yet, I can’t help but recommend this blend. Maybe with careful control of humidity the construction issues will dissipate enough to discard the criticism of an under filled cigar.

Now and again, I find myself puzzled. OK. Maybe more than just now and again…here we have some masterful blending and in order to keep the customer satisfied with a $6 cigar, they dropped the ball when it came to showing some quality control on the rolling process. I can’t be the first person to notice this. Lucky Cigar must be happy as their big list of blends probably sell like crazy. As long as the customer is happy, screw the rest.

The blend continues on its path of flavor bomb status. No puff is like the previous one. A prize in every Cracker Jack box. No tattoos please.

Nicotine is now clouding my vision. My typing has slowed down. Typos abound. I’m going to need to eat something as soon as I finish the Habano Esteli.

Strength is a potent full.

Deep Purple is on the music station. We toured with them in 1975 in England. One night, at the hotel we all shared, we decided to take a 2am swim in the indoor pool.

We were having a load of fun when the cops showed up. Some resident of the hotel reported that there was a bunch of topless girls in the pool. Doesn’t say much for our physiques. Our long hair was a deception. The cops were ecstatic to meet Deep Purple. Curved Air? Not so much. Until our chick singer flashed the cops…then it was all about us.

The last third is a real joy. The Habano Esteli doesn’t know when to quit. Complexity was achieved from the start.

I’ve already smoked the other two blends and found them every bit as good as the Habano Esteli.

The cigar fades to black after an hour of smoke time.

Lucky Cigar sells their wares in singles, 5 packs and boxes. You can do what I did and buy 3 sticks from the large list of blends offered and just make sure you keep an eagle eye on the humidity.

And now for something long ago and far away:
It was 1982.

Today is the first day of the Jewish New Year (Rosh Hashanah). Year 5778. So this is about as close as I can come with a Jewish holiday story.

I have published this story a couple times but a reader reminded me he loved this story so I dug it up from a review back from April, 2014. I hope you enjoy it. And it is all true. You couldn’t make this shit up.

I love music. I love playing bass. And my body of reviews has presented that to you.

It was Passover day and I was stuck in the studio with Hall of Fame drummer Hal Blaine and a full orchestra. Sunset Gower Studios in Hollywood. 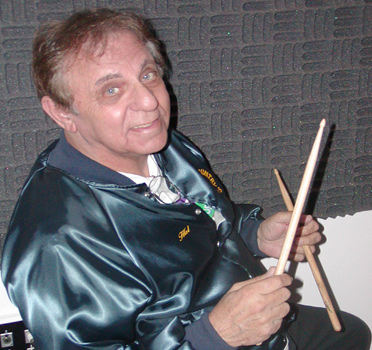 Hal got me on board to do a Barbra Streisand album. It paid better than scale and it lasted two weeks…because we didn’t layer. It was done live. Nothing is scarier than sitting with some of the finest studio players who sight read and get it right on the first try. That was very intimidating. Now? Charlotte has to remind me every time I leave the house to pull my fly up. 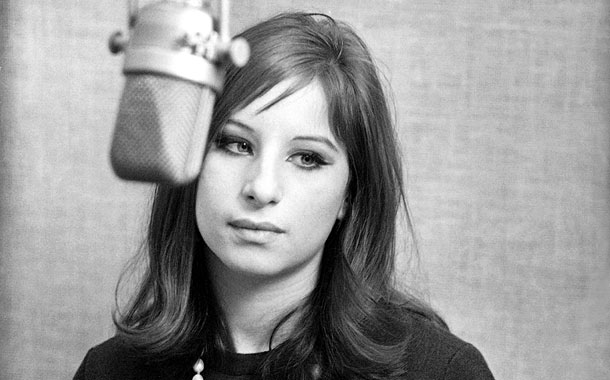 On my last night, Passover, Streisand showed up in the booth. I could see her and was blown away. I never thought I would see her; let alone possibly meet her. I didn’t know if she would have a phalanx of body guards to keep the lowly musicians away from her. From my vantage point, this didn’t seem to be the case. (My cousin, Fred Selden, is a legendary session reed player. He has made an incredible living doing TV and movies as well as playing pop and on serious jazz albums. At the age of 13, he led his own jazz band to tour in Europe. Back in the 70’s, he played on the “Donnie & Marie Show.” During pre-recording of the show’s numbers in the Gower recording studio, Marie was ushered out of the studio and into a special movie star trailer every time the band took their union sanctioned break. The Mormon family didn’t want her to associate with any of these iconic Hollywood session players.)

The session broke around 7pm. I was packing up when Streisand approached Hal. Hal had played on many of her albums and they were old friends. Hal was courteous and introduced me. My knees were knocking.

When she heard my last name, she asked if I had any family? I nodded yes as the ability for speech eluded me.

She looked at both Hal and me and asked why we weren’t at home for Passover Seder? Hal’s real name is Harold Simon Belsky.
We both shrugged our shoulders. Passover was at my dad’s that year. And I was a good hour on the freeway to get there from Hollyweird.

She was fretting she was in the studio to begin doing her vocals…so she would totally miss out on her Seder. Though why she allowed this scheduling is a mystery that will go to my grave.

I began packing my gear into my 1971 Datsun station wagon. She followed me out.

“Screw it. I’m coming home with you.”
I gasped.

Before I could say anything, she got into the front passenger seat. Her manager came running out and asked what the hell did she think she was doing? Back in 1982, Sunset Gower charged $250 per hour.

She told him that she was going to a Passover Seder at my dad’s house in Long Beach.

The manager flew off the handle and started screaming at her. I didn’t say a thing. I just watched as they argued. The manager leaned into my window. Streisand leaned over me to yell back. I was sandwiched with no way to escape.

She told him he had no right to make her work on Passover and she would do what she damn well pleased.
I was pissing my pants.

A moment later, she got out of my Datsun. She leaned in and gave me a hug and winked at me as she walked back into the studio. She had never really intended to come home with me. She was just pranking her manager.

I was relieved. What could I have possibly talked to her about? Not to mention that if she did come home with me, the scene would be right out of the movie, “My Favorite Year.”

When I got to my dad’s, I told everyone what happened and my evil step mother went bananas.
She was from the same neighborhood as Streisand in Brooklyn. She was on Cloud 9 at the thought that maybe Streisand would have attended our Passover Seder.
For years after that, she told everyone who would listen about this story. The near miss. I never had the heart to tell her that it was never going to happen.

A couple weeks later, I got a nice letter from Barbra. Hal gave her my address.
Sometimes, you just never know where life will take a strange turn.
The next bass session I did, with Hal’s endorsement, was a national Chevy commercial. No celebrities or stars attended.