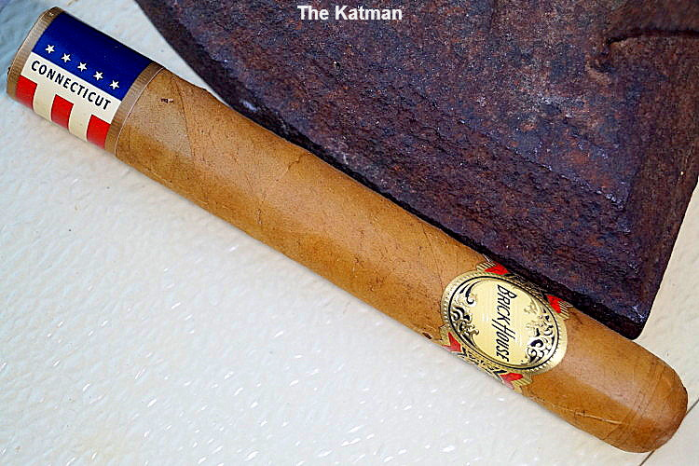 Today we take a look at the new Brick House Double Connecticut.
Bought a 5 pack online.

“The cigars are known for their affordable price tag (most sizes cost less than $7.00) and strong performance in Cigar Aficionado blind tastings.

“The new blend is crafted with a shade-grown wrapper and a broadleaf binder, both grown in the state of Connecticut. Similar to the other two Brick House lines, Double Connecticut contains all-Nicaraguan filler tobacco.

“The result of this combination is a very spicy and peppery rich flavor,” Newman said.

“Brick House Double Connecticut, like all Brick House cigars, is rolled at the PENSA factory in Estelí, Nicaragua. The original Brick House line launched in 1937. It was retired for decades but resurrected in 2009. Last year, the Brick House Corona Larga earned the No. 17 spot on Cigar Aficionado’s Top 25 list.”

DESCRIPTION:
Solid cigar. No hard or soft spots. The wrapper is a tawny caramel hue with a nice overall toothiness.
The quadruple cap is impressive. There is a small modicum of assorted vein types and the seams are absent.

AROMAS AND COLD DRAW POINTS:
From the shaft, I can smell some wonderful cocoa, creaminess, red and black pepper, nutmeg, cinnamon, cedar, a touch of grassiness, assorted nuts, a big dose of malts, and barnyard.

FIRST THIRD:
Critics of Connies say the same thing…they are one trick ponies. Flavors of citrus, grass, hay, cream, earth, and barnyard are the only flavors available.
I disagree with that assessment. Yes, there are plenty of crappy Connecticuts out there. A lot.
But generic rules were meant to have exceptions. So here goes…

I’m not a Connie fan. But there are a few I love: New World Connecticut by AJ, Nomad Connecticut Fuerte, and El Centurion H-2K-CT by My Father Cigars. Nothing “slight, subtle, light, or faint” about these babies.

I always allow the cigar to dangle from my lips as I type. First noticeable thing is how heavy this stick is. I think I need block and tackle mounted on my forehead to hold this baby up.

Not a bad start at all. I’ve had these cigars for two months and just been dying to review these cigars. They were good after the first week but I knew they’d be much better with additional humidor time…and I was right. The blend is more intense, less abrupt, nice flow of transitions, quick rise of complexity, a conga line of subtle flavors that disappear as quickly as they appear. Over all…a Connie with street cred.

The draw is just a little tight. Slight plug underneath the cigar band. One quick ream with my PerfecDraw cigar poker and issue resolved. Remember, the promo code of Katman will only get you 15% off purchase of the cigar poker and cigar glue until December 31, 2017. I get dozens of emails every day and half of them thank me for turning them on to this gorgeously designed cigar poker and how it paid for itself with just a few cigars that might have been chucked from plugs.

Back to the Brick House Double Connecticut. This is a densely packed cigar. I am expecting a 2 hour experience.

The BHC is super complex only one inch in.

A surprise fresh banana component shows up opening all sorts of flavor forks in the road: whipped cream, custard, and a sweetness that is a marvelous companion for the lemon zest and caramel flavors. It is beginning to become a decadent blend.

Flavors swirl like riding the teacups at Disneyland. Hold the vomit please.

Strength started out a high level of mild/medium. It is now a solid medium strength.

The pepper is on a mission to be in constant flux with the spiciness bouncing back and forth among black, red, and white peppers.
Pumpkin spices join the fray. (Man, this blend is going Bozo crazy on me). Cinnamon, ginger, nutmeg, allspice, and clove. I have a real craving now for a piece of pie.

The Brick House Double Connecticut is no ordinary Connie. It belongs in the same category as the great list of brilliant Connecticuts: New World Connecticut by AJ, Nomad Connecticut Fuerte, and El Centurion H-2K-CT by My Father Cigars.

There is a solid foundation of what most reviewers find to be the expected flavors of a light Connie blend. But then the blend adds so much more expanding its influence on my palate…and we haven’t even hit the sweet spot yet.

The char line is spot on. Even though I consider this a value cigar blend due to its reasonable price point, it is exhibiting the characteristics of a cigar at twice the price.
The wrapper and binder, both using Connecticut leaves, give the blend a super creamy state of entropy.
The first sweet spot is reached.

This is the perfect morning cigar. Not so strong as to make one lose consciousness from getting your arse kicked…but strong enough from both an intensity level and flavor complexity that gives the Brick House Double Connecticut an amazing personality.

I firmly believe that the lack of reviews of this blend is a bloody shame. Brick House has been a solid go to cigar for years because it is a great blend that anyone can afford. That same commitment and passion for blending has been transferred to the BHC.

Banana cream pie with a dusting of pumpkin spice and a pinch of lemon zest are screaming laughter.
The rich complexity just nails it and turns this blend into an amazing experience.

Now I highly recommend that should you purchase your own BHC, let them rest for two months at the minimum. Earlier than that and you are going to miss out on more than half of its goodness.
The marzipan does a River Dance on my palate.

When I was a kid, my folks made me take tap dancing lessons. I got private lessons from a jazz great by the name of Percy Venable. A very old black man with his own studio in downtown Long Beach. He was Louis Armstrong’s right hand man at the height of his career. But the whole exercise was almost as bad as when I was forced to take accordion lessons around the same time. I had no friends left because of showing off my accordion and tap dancing skills…friends would run from my house in horror. I do believe my parents were trying to turn me into a little gay boy. But I relented and maintained my straighthood.

Halfway point arrives at one hour.
Strength is now surprisingly more intense as it reaches just above the medium level. The rise of black pepper urges this on.

Sweet spot 2.0 is in play. I’m overwhelmed with a combination of subtlety and Ethel Merman.

While I love the above mentioned Connecticut blends, the BHC has its price going for it. I mean $5+ for this stick is just crazy. J.C. Newman could have been greed monsters but they chose to follow suit with the Brick House mission statement. Make a great cigar but keep it reasonably priced. Done.

I haven’t had to touch up the burn line even once. There are a truck load of much more expensive cigars that don’t have the care and love that went into the rolling of this cigar.

Strength is inching towards medium/full. I did not expect this.
Mind you, this is the first cigar of the day for me so my palate is wide open and not influenced by drink or food. It’s much harder to discern the nuanced flavors this blend presents after a couple meals and can after can of Ensure.

Killer Connie. Maybe I will name my next blues band just that. I like it.

The Brick House Double Connecticut is one of the most consistent blends I’ve smoked. Construction is top notch. Complexity is at full tilt. Lots of transitions. And a mile long finish.
I really do enjoy raving about a good cigar as opposed to insulting it. I’m not as clever or witty but at least I feel I’m providing a PSA.

Nicotine creeps in.
Man, the creaminess, black pepper, malts are kicking butt now, banana custard, pumpkin spices, citrus, cedar, chocolate, café latte, a touch of licorice, caramel, marzipan, dried fruit, and honeysuckle makes this an incredible blend.
Definitely box worthy. But don’t trust me, snag a 5 pack.
This is the only true Connie released this year that has impressed me.

The black pepper is kicking out black smoke now. Super potent and for spice junkies everywhere, this blend has the perfect balance of spice v. sweet v. savory.

The last third takes the Brick House Double Connecticut to a new plane of existence. It is ripping my palate to shreds. Every flavor note has morphed into making the whole greater than its parts. Transitions are moving at near light speed.

I’m sure I lost most of you after I hit 1700 words. And you went straight to the rating to keep awake. OK. I’m a motor mouth on the keyboard.
Take it from your Uncle Katman…you will truly enjoy this blend…even if you’re not into Connecticuts. This blend will change your mind.
Final smoke time is 2 hours. What a ride.