Today we take a look at the Joya de Nicaragua Silver.
Smoked one stick prior to review.

BACKGROUND:
Factory: Fabrica de Tabacos Joya de Nicaragua S.A.
Released: August 2018
Regular production.
From the Joya de Nicaragua web site:
“The national release of Joya Silver is a shining representation in the Joya family of our continuous quest for a truly unforgettable, yet quotidian, smoke. Silver is a box pressed cigar that delivers a dynamic complexity of fresh spice, chocolate and cherry notes. Its oscuro upper-priming wrapper showcases the perfect complement between the richness of the Nicaraguan fillers and the refined sweetness of the Ecuador grown wrapper and Mexican binder. The result is a medium to full body smoke that achieves an indulging matching of flavors.

“In the year of our 50th anniversary, we want to be recognized as a cigar factory that delivers the expected timeless quality of a Nicaraguan cigar, but that is also willing to evolve and take on new challenges. On top of creating a cigar for the Joya Line with a more complex flavor profile, we wanted to create a strong visual impact. Joya Silver’s packaging is probably the edgiest in our portfolio, making it a smoke that shines.” said Mario Pérez, Joya de Nicaragua’s General Manager.

“As usual, Drew Estate will distribute the brand in the USA as part of our exclusive agreement.”

APPEARANCE:
A rustic looking cigar…sort of rough around the edges and looks like it was left in Jeffrey Dahmer’s basement for a year. Big veins, tight seams, double cap, box pressed, an oily chocolate brown wrapper with some tooth to it. The cigar band is kind of showy accenting the cigar in a positive light. And perfectly packed. Just the right amount of give without soft or hard spots. Nice.

FIRST HALF:
The draw is open and clear. I can put my PerfecDraw cigar poker tool away.

I’m not a big JdN fan but the first time I smoked this cigar, I was duly impressed. It’s now a month later and look forward to a good smoke.
Right off the bat, flavors excel with lots of creaminess, chocolate, malt, peanuts, coffee, honey almonds, and black pepper.

It’s already achieved the first stages of complexity. A nice transition parade is forming and there is a nice lingering finish. Don’t let me down, Silver.

Speaking of Roy Rogers…when I was around 5, we visited my aunt and uncle in Bel Air and I discovered that they owned one of the original German Shepherds used in Rogers’ shows: Bullet. A huge dog and my uncle put me on his back and I rode around the living room like a real cowboy.

The balance is on the money. The spiciness is right where I like it. It does not overwhelm but lays down a nice arpeggio of bass notes to lay the melody on. 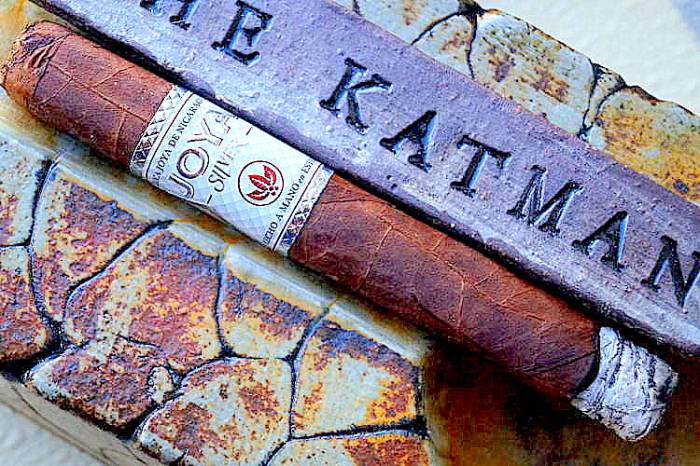 And I am redeemed. I’m smoking a box pressed stick and having zero burn issues. My karma is in good stead. And then the ash falls directly on my nuts.

There is a nice build up of character accompanied by an even brighter sense of balance. Flavors are morphing into a cohesive unit. This is a really nice stick. And the Corona can be had for only $5 online. This is going to be a great every day cigar.

The chocolate is like hot fudge on a vanilla ice cream sundae…topped with nuts.

You know, occasionally; when I’m bored, I read other reviewers and I came across a couple…one in particular that pish poshes the reviewers who have great palates. And can taste all the subtleties that the blender intended for us to taste. Just because a reviewer in the cigar industry has a very limited palate doesn’t translate that he is the mean average for all cigar smokers; let alone reviewers that work hard on finding the gut of the cigar blend. Asses like that really piss me off. Cigar smoking is subjective. Period. Never let some dumb ass describe 4 flavors all the way through a good cigar because all it means is your palate is better than the reviewer’s drivel.

I’m impressed with the team spirit of the blend’s use of sweet and savory in perfect harmony.
The choice of sizes for this cigar makes sense. But I love this little Corona. It is jam packed with flavor. And I’ve only had the cigar less than two months.

The ash is rock solid. A well-constructed stick even if it looks like a forest twig.

Suddenly, I realize I’m not drinking anything with the cigar. That’s unusual. But it works.
This $5 stick kicks the shit out of cigars at twice, or more, the price. No shit.

This is nearly unheard of to spend only a few bucks on a cigar and for it to be treated with such passionate design by the blender that he manages to produce a wallet friendly cigar that can stand up to most boutique blends.
Nearing the halfway point and the cigar is singing to me. In Italian.

SECOND HALF:
A perfect cigar for newbies and experts alike. And for those that struggle with discerning specific flavors. You know what you like and you know what you don’t like. You will like the Joya de Nicaragua Silver.

The creaminess has been stalwart in its mission to create a pleasant mouth sensation throughout. Chocolate and mocha deliver. The honey coated almonds are hanging back but creates a thin layer of flavor that would be missed if not there. Black pepper is even keeled.

Strength ambles to medium+.
The peanut element returns. So, does the rye bread. All we need now is some blackberry jam.

The cigar intensifies at this point. It now challenges my point of perception. It is stronger. It is much more complex. There isn’t a lot of movement in the transition category but retains a lovely finish.

The Silver begins to taste like a Snickers bar.

I’m glad to see a couple of my favorite reviewers confirming my experience and giving the cigar a thumbs up.

I’d love to have a box of these. The Ultra size intrigues me. The Corona is great but a short smoke. I want what this baby has to give to last longer.

Clearly, you can’t judge a book by its cover. This is not a pretty cigar. And yet the construction has been perfect. And matched only by its very positive push of what brings you back to the same cigar over and over.
As I near the end, no hint of harshness or bitterness. Nice.
The spiciness increases and I find my sinuses emptying. Lovely picture.

I’m burning my fingers so I use my PerfecDraw poker as a roach clip.

The perfect storm…a more than reasonably priced stick that everyone can afford, a blend that satisfies my personal tastes, complex, balanced, and so smooth. What else do you need?
Yeah, I highly recommend the Joya de Nicaragua Silver. It is such a pleasure to be surprised and delighted when you find a gem like this. Get some.

And now for something completely different:
1975

The gig was in Cambridge, England. A huge hall without a single seat. (They have since installed auditorium seating). They shoved at least 2500 people into that building. Even though it’s a school town, it had its seedy areas. And that’s where we played. The Cambridge Corn Exchange. A building that was over 150 years old. Huge ceilings which caused the music to bounce around and echo. Forcing us to play simply so as not to muddle the music. I hated that. 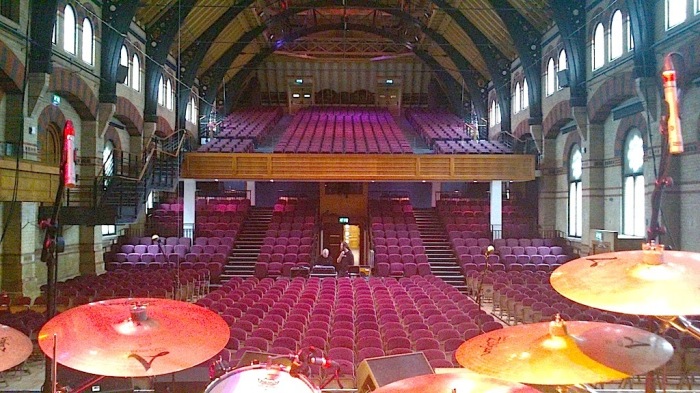 The crowd was packed up against the edge of the stage. And the stage was only 5 feet tall. Close quarter combat.

A funky English motorcycle gang barged their way to the front of the stage and started in with us. A motorcycle gang back then didn’t drive Harleys….no…they had scooters. Real badass.
At first, it was just heckling of the chick singer who handled it like a champ. But then one dumb fuck reached over to the violinist’s foot pedals. And he began to pound on them changing the violinist’s sound with each punch!!

Well, this didn’t go down well. Darryl, the violinist and leader, thought of himself as a badass when in truth, he was a wuss. He went crazy and I yelled for the roadies to get out there on stage and deal with it.

Darryl reached over with his violin bow and smacked one of the bikers, hard, in the side of the head with it while yelling at him to stop fucking around.
Well, this didn’t go down well, with the biker, either.

The biker pulled a huge folding knife from his waistband and flipped it open. We are in the middle of a song and the biker and Darryl are screaming at each other and our dumb fuck roadies are in la la land.

I stop playing, unplugged, and walked over to the roadies at the side of the stage smoking dope. I screamed at them, “Do you see what’s going on?”

Darryl hits the guy again, but this time, really hard. Hard enough to break his bow. Part of the bow stuck into this guy’s head, gushing blood, and then it became a free for all. The roadies jumped into the fray. And we had some big roadies.

There was a kid in the audience who was standing right next to the biker and was oblivious to everything because he was watching the sexy chick singer, not the angry violin player.
The biker yelled, “OH YEAH!!” And stuck this huge knife into the back of the kid as an exhibit of what he was going to do to the violinist.

My eyes bugged out. I could not believe this. It was fucking Altamont.

The roadies then went Medieval, joined the fray, and pummeled the bikers to a pulp. Our stage manager rushed us off stage and into the dressing room where he locked the door.

Darryl was stomping around with his chest puffed out acting like a turd. Because of him, he angered the biker enough to hurt some innocent kid. And all he wanted to do was go back out there and fight the biker; who by the way, would have killed Darryl.

Moments later, we were rushed from the dressing room to waiting cars and whisked back to the hotel. The cops followed us in three cars. Sirens wailing.
We asked about the kid and we were told he was in bad shape but lived to tell the tale.
Darryl had to go to court to testify a couple months later and the biker went away for a long time.
Who said rock n roll was for Poofters?