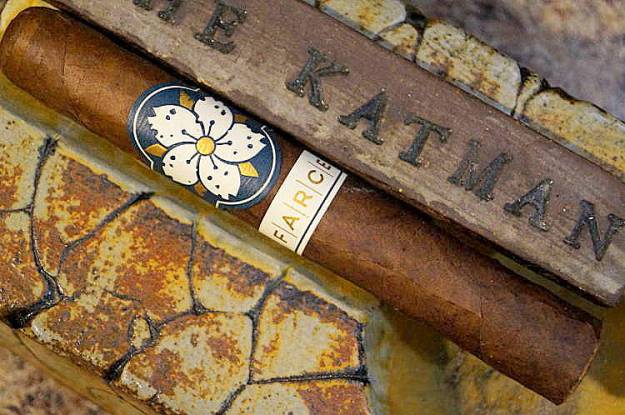 I’m in the strange place where I have review cigars cooking away in my humidors, but none are ready to write about. So, I’m scrounging through my boxes of illumination looking for unicorns that have been lying around not earning their keep.

This is how I came across this cigar. I’ve had it marinating naked for one year. This seemed like a good time to put pen to parchment. The few reviews I read all agree about the blend. Basically, a cigar whose attributes are coffee, chocolate, wood, pepper, and earth. I read this description over and over. No one was crazy about it but most still gave it a 90. (I make no judgments). I’m hoping that maybe a year playing kick the can will bring this cigar to life and deliver some uppercuts and jabs to my palate. Let us begin.

BACKGROUND:
Regular production
Released June 2019
From Matt Booth on the Room 101 website:
“Look at me. The visual of my decadent and oily wrapper triggers a salivary response within your mouth hole. A brilliant spring of neurotransmitters rushes from your midbrain and dives headfirst into your bloodstream at the nanosecond your eyes make contact with my succulent and inviting exterior. Can you only imagine what may happen once you taste me? Don’t think about it – be about it. FARCE Maduro is the taste grenade you have only dreamt could be real. Zzz”

From Cigars International:
“Back in early 2018, rumors were beginning to swirl that Matt Booth was done with cigars. The creator of Room101 and contributor to some of the best Camacho and Davidoff blends out there stepped away from blending, but the cigar industry barely had time to mourn before he was back, guns blazing, announcing the release of the FARCE series. Now, just in time to close out 2019 with a bang, the third installment of the FARCE is set to take its place in your collection.

“Enter Room101 FARCE Maduro. The first thing you’ll notice when you open the box is how well the new color scheme of the bands and box compliment the rich, deep, oily Mexican San Andres Maduro wrapper. This beautiful leaf covers a Sumatra binder grown in Ecuador, and a hand-selected filler blend composed of Pennsylvania & Connecticut Broadleaf and Nicaraguan leaves. Hearty is the word that best describes the FARCE Maduro, which will have your palate immediately captivated by medium-full bodied notes of leather, espresso, spice, and chocolate. The original FARCE earned a 94-point rating, and this third installment of the FARCE series is the best one yet, so secure your boxes while you still can!”

We mourned? Thank God he came back to rescue Davidoff and Camacho. I was so happy, and relieved, that Bootie returned to save the cigar industry.
Notice that the C.I. description is pretty much the entire flavor profile that the professional reviewers reported.

APPEARANCE:
Not a pretty cigar. Lots of lumps and bumps up and down the pole. A visceral vein runs up the front of the cigar, and in several locations circumferentially, looking for Dr. Fronkensteen to rectify the issue.

Seams are clearly visible but tight. Look at my photos. Is it me or does the cigar taper down considerably by the time it reaches the cap? I measure it and the cigar tapers from a 50-ring gauge at the foot to a 45 at the cap. Odd. There is a considerable amount of oiliness on the deep, rich wrapper. An $11 cigar should look like a bit of care was taken when rolling it. The cigar looks cheap.

FIRST THIRD:
The draw is spot on…just how I like it…so I put my PerfecDraw draw adjustment tool away.

First up is a blast of black pepper that supersedes any other flavor. There is a bit of cedar that breaks through. The back of my throat is scratchy from the spiciness.

Mustiness shows up. Nothing to do with the humidor time or its nakedness. My review of the Ilegal Habano was a year old and suffered no musty qualities.

Actually, the tobacco tastes old. A hint that maybe storing it naked for a year was not a good idea. It took the cigar blend down to downtown.
Saltiness appears. A bit of chocolate is hovering but making very little impression.

The Ilegal Habano spewed like a songbird. The year in hibernation only made that cigar better. Unless something changes dramatically, I believe I know where this cigar is heading…to Dr. Torquemada’s torture dungeon.

The char line is crisp.
Strength is a solid medium.

The spiciness relents for a moment and some creaminess appears taking the heat off the back of my throat.

Half an inch in and no signs of complexity or balance. Pretty much a $6 cigar lounge cigar…with no cigar band.

Man, I had really hoped that lightning would strike twice. It appears not to be the case.
The cigar has no character I would brag on. Black pepper returns with extreme prejudice. That’s all I can taste.

This was not a blend made to last. Bummer. I was hoping to finally write something positive about a Room 101 blend.

Maybe the cigar has a shelf life I wasn’t aware of. Lots of cigars follow that same road. A year later, instead of blossoming, they just die a horrible death. This Farce seems to be one of those. How am I going to write an entire review if this cigar remains in hellish stasis?

An $11 stick (Yes, I know my Commonwealth readers are laughing) should hold up beautifully. The blend seems to be trapped under a chamber pot left behind on the Titanic.

If the black pepper would just fucking stop crowding everyone out, there might be a decent cigar underneath.
But if experience tells me anything, it’s downhill from here.

The mustiness returns en masse. There is no way I will be able to finish this cigar. My throat wants to dial 9-1-1.

I’m gulping water. Not to see if it produces explosions of flavor, but rather, to calm my burnt throat.

Strength moves to medium/full. Great. Nicotine is not far behind.

And then as I am beginning to approach the second third, the spiciness backs off enough to let my palate accept a small dose of complexity. Transitions? Not a one. The finish…yes, an open bottle of black pepper.
There is no sweet v. savory equation. It is lying dead in an alley.

SECOND THIRD:
And then in one fell swoop, the complexity turns into mustiness like a bad magic trick.
Bloody hell.

I had prepared another “Almost Famous” story like I provided in the Ilegal Habano review. I believe I will save it for the next review.

Strictly a linear experience. It’s going nowhere fast. Believe me, I’d rather have written a fawning review of how a year underground made this blend excel.

“Feelin’ Alright” by Joe Cocker is playing. The Cosmic Muffin is a jokester.

The burn goes wonky on me. A fix up is required.

I am teased by short moments where the blender’s intent is released from its shackles and then it recedes back into its shell.
Maybe the second half will see redemption and resurrection.
More water…more water.

Underneath all the unflattering detritus is a blend dying to break free. It is a losing battle at this point. Now the reviews I read all took place shortly after the cigar was released. They aren’t much different than this review other than I don’t taste even the smallest amounts of flavor that they did.

The second half begins without a sign from the gods that it will reinvent itself.

Usually, the intense spiciness is weaned from a cigar over a long nap. Not this baby. It is the star of the show. It is beginning to get to me.

Even with the lukewarm early reviews of this cigar, it received a 90 pretty much across the board. One esteemed reviewer said all the things I’m thinking.

Flavors and character are playing peek-a-boo. They hang in long enough to frustrate the shit out of me.

Once I start a review, there is no going back. Too much prep work goes into a review and to just throw it away because I don’t like the cigar doesn’t happen.
Water really comes to the rescue taming the raw throat.

LAST THIRD:
I take a drag and I get some nice flavors or two. But immediately in the middle of that, the cigar returns to musty and old tasting. The blend is on life support.

The stick tastes exactly how it started. Not a single improvement.

Red pepper shows up in tandem with the black pepper. Now my throat is raw while my tongue feels like I stuck it into an open fire.

I could wait this out to see if the last 1-1/2” shows life…but I know it won’t.
So why am I still reviewing it?
Beats me.