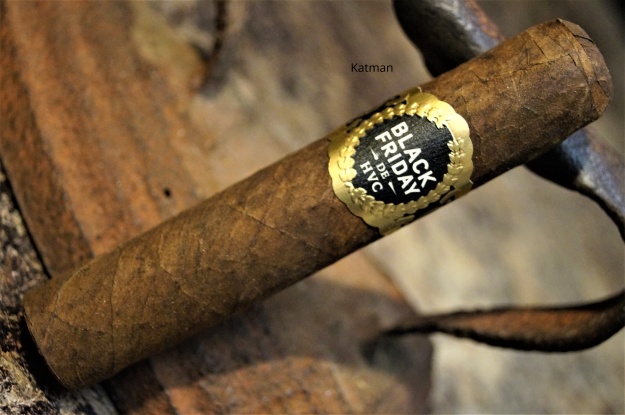 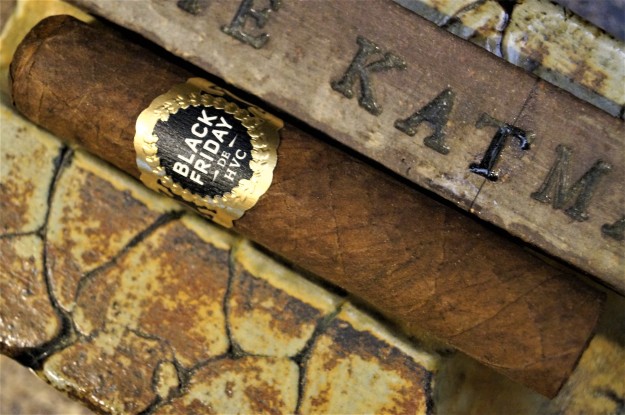 BACKGROUND:
Limited Production: (600) 50 count cabinets
Factory: Tabacos Valle de Jalapa S.A.
HVC’s Black Friday has been released every year since 2015.
There is no HVC website, unless you call their Facebook page a website.
That’s about it.
If you want to read more about HVC, there is a good article in Tobacco Business magazine.

APPEARANCE:
I was a little bit shocked once I took some photos of the cigar. In the hand, the cigar looks almost like an everyday Maduro. But shed some light on it and the wrapper looks like an oak leaf left out in the rain…and nothing Maduro about it.

The wrapper has a bay leaf look. Oiliness is faint or non-existent. The stick looks like a Thomas Guide road map. Lots of action going on that makes the cigar look like it was in a traffic accident. Not much care put into the placement of the triple caps…sort of rough shod.

Not a heavy cigar. Somewhere between a toothpick and a Clark Bar. I have smoked one prior to this review and the baby smoked quickly. The disappointment came from the fact that I liked the cigar and it seemed to be gone in minutes due to its designer’s choice of size. Not into Rothschild style sticks. Especially if they are good cigars.

SMELL THE GLOVE:
There isn’t a plethora of aromas hitting the airwaves. I hunker down and damn near shove the stick up my nose. I do smell caramel, floral, dark chocolate, malt, black cherry, cedar, white pepper, creaminess, cinnamon, and barnyard.

Not a lick of air is passing through this cigar. Nothing. Nada. Thankfully, I am smarter than the average bear and grab my PerfecDraw draw adjustment tool. Normally, a plug is in the area of the cigar band. Not this time…I need to harpoon the entire length of the stick and I’m now ready to go.

FIRST HALF:
I have prepared a list of cigars for my end of year top 25. At the moment, I already have an HVC sitting pretty.
I made a decision this year that is different from all other years (Sounds like a Hanukkah prayer. Try to find the afikoman).

I am not going to double or triple up cigars of the same brand. Even if they deserve to be on the list, only one will be represented. As a dear friend said to me, “Sounds like a good policy. Share the love.”

The point being, in this case, is that the Black Friday has some social climbing to do to replace what is already in place representing HVC.

Time to light up.
And Pandora starts with a Fleetwood Mac song heard for the one millionth time. Nicht gut.

Excellent start. A fisted glove of complexity shows up from moment one.

Very creamy. A deep richness that is super satisfying. A very generic nuttiness. Black cherries jump in with gusto. Creaminess is gearing up. Black pepper, And mocha java.

Every online cigar store I checked for deals (there are none) called the cigar size something different as I outlined in my leaf stats above.

The cigar went out.

A nice hearty balance appears that gives the blend such a nice distinction.

The spiciness is a little too hot to handle and I hope it gives up the ghost soon as it interferes with nuances trying to shine through. Still, I love the heartiness. A real man’s cigar…or a woman that is dangerous and carries a razor.

The thing that impressed me with my first stab at this baby is the black cherry element really dominated the flavor profile about an inch in. I am curious to see if it happens again. It was damn excellent.

The stick is a slow roll. The light weight of the cigar fooled me.

At this early stage, the flavor profile is evenly spread out…nothing jumps out at me. But the black pepper is too strong. I am guzzling bottled water like a thirsty dog.

Strength is an immediate medium/full.

Steely Dan…” Do It Again.” In the world of hired gun musicians, if you ever had the chance to play with this band, you were considered to have ‘made it.’

There is some graham cracker. But the black cherry has disappeared. It was that flavor I found so prominent and exciting in my first stab.
Still, this is one of those blends that you find yourself flapping your lips with no foresight or foreskin. It is my palate demanding more.

I can taste aged tobacco. I find it difficult to describe that experience…but you know it when you smoke any good cigar.

The savory quotient is much higher than the sweetness element. It feels off kilter for my preferences. I like a 50/50 harmony. Sort of like 50% Sativa and 50% Indica.

I feel safe to say that at this point, the Black Friday is not going to knock my other HVC blend off the list.

I am a devoted HVC fan. The company pumps out consistent blends.

My last endeavor found this cigar to have a 40-minute lifetime. I dug it so much that I used my PerfecDraw tool as a roach clip to suck every vestige of enjoyment from the cigar.

By now, the black cherries were everywhere. Today? Nothing. Some college student should do their master thesis on the human palate. I would read that.

I don’t know if its time of day, what is in my stomach, or my brain shifting gears that can make the same cigar taste one way and the next time a different avenue.

SECOND HALF:
Sure as shit…it took 20 minutes to get here.
Actually, I was a little miffed on the first cigar because it tasted so good, but it disappeared so quickly.

This time around, the cigar is very good but is delivering a tangential flavor profile. It has a mind of its own…like you, dear readers.

Creaminess, espresso, black pepper, graham cracker, black walnuts, dark chocolate, and charred meat. Virtually no sweetness factors. Now you may like that. We are all different. I just enjoy a cigar that finds a perfect balance between the two.

The burn is a little off. But no need for a torch yet.

I would have rated my first try of this cigar higher than I plan this time.
Not a sign of the lovely black cherry I dug in the first cigar.

Sometimes I think that the placement of a cigar in my humidor affects that flavor profile.

I wish that the size was re-thought. A bigger stick would have been nice.
Time to roach clip the stick.

The blend is steady as she goes. No major transitions. It seems happy to have found its sweet spot in just being a hearty and rich blend.

Despite the short comings compared to my first attempt, it is a very good cigar. I don’t believe it is a cigar for newbies due to the strength. But if you have hair on your chest, you will enjoy it immensely.

The graham cracker element is the closest thing it presents to containing any sweetness factor.
Once again, remember that this is just one man’s opinion.

The cigar is a limited edition…pretty much like everything hitting the market these days.

I have a few sticks left and I am going to allow the cigar a few more months of humidor time to see how it affects the flavor profile.

Dusty Springfield…” Son of a Preacher Man.” I never knew anyone that didn’t love Dusty.

As the cigar diminishes into the ether, it gets hot.

It is almost as if I am smoking a different blend than my first try with this cigar.
Even so, I am truly enjoying it. I just enjoyed my first cigar more.

The price is right. I recommend picking up a fiver.
The Black Friday leaves the building.
This will not supplant the other HVC blend I have put on my top cigar list.

And now for something completely different…
Skippy the Squirrel.

Growing up in SoCal had some great advantages.
The coastline was always an adventure to explore.

In high school and college, Skip and I would find the coolest tide pools and interesting shorelines hidden by cliffs.
One day, we went down to Laguna Beach.

We struggled to get down to the rocky shore. Tide was out and there was plenty to explore.
We found a cave at the base of the cliffs. It had some ocean water inside but only came up to our ankles.

We hung out and smoked a doob. A cave was a fun thing to investigate. Lots of sea creatures to behold.
What we didn’t think about was the timetable of the tide.

It wasn’t long before we realized that the tide was coming in.
The cave quickly began to fill up.

We began to panic because we had to rock climb out of that area.
Skip, a tall man with a good 3” of height over me, got up the buttress with grunts and groans.
I was right behind Skip.

The water was coming in so quickly that I found myself up to my waist at the bottom of that 7-foot-tall buttress.

Every time I attempted to get out of there, I fell back into the ocean. I was freaking out. I saw my death from drowning.

I got halfway up and began to lose my grip due to the sides of the wall had begun to be very slippery from the waves hitting it.

The water was now as tall as me.

Skip reached down and grabbed my arm to help me up…but he struggled, and I had no place for my feet to assist in the climb.

It took a couple minutes, but Skip finally hoisted me up to safe ground.
I did think I was a goner.

I gave Skip a huge bear hug and thanked him for saving me.

Nothing like looking into death’s eyes to eradicate any high we had gotten from the joint. A real buzz kill.

We never did that again…or at least without checking the tide tables first.
My friend saved my life.
More on Skip in later reviews. A most interesting dude.

My daughter, Katie, just found this photo online.
Skip is the elder brother and is on the far left: 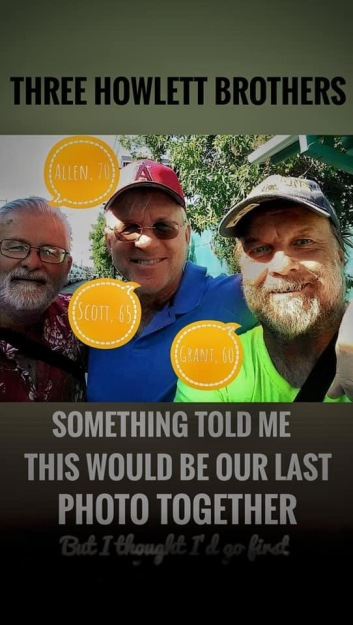