Thanks to SBC for the kind use of their photos: 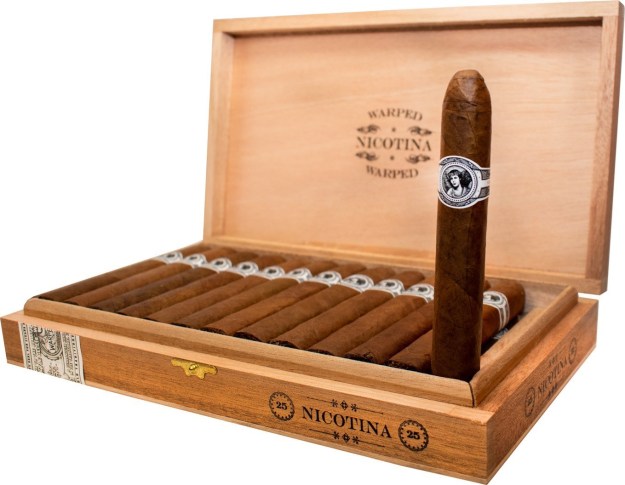 BACKGROUND:
Released January 2022
Factory: Tabacos Valle de Jalapa S.A. (TABSA)
From Cigar Aficionado:
“Warped is adding a strong, new cigar to its typically medium-bodied arsenal. The Florida-based company is reincarnating an old Cuban brand from 1880 called Nicotina. The new cigar is packed with Nicaraguan tobacco and it’s expected to be full bodied, a rarity for Warped.”
Read the rest of the article here.

The stick is solid and evenly filled. Veins are visible but fall under the category of enhancing the façade. The box press is minimal as there are a lot of curved corners and edges. The top of the cap is actually flat instead of round. A lovely subtle extra. And lastly, I find the cigar band captivating with its black and white color scheme and an etching of Kyle Gellis when he served the Emperor of Rome.

For a cigar that is packed by professionals, the draw is absolutely faultless. I place my PerfecDraw draw adjustment tool back into its hyperbaric chamber.

THE WHOLE MEGILLAH:
I don’t want to futz with a tape so you’re getting the whole ball of wax. I will endeavor to bring harmony and a mix of substances only Michael Jackson could have identified.

A smooth entry point in the first puffs. The cigar feels heavy as it dangles from my lips as I type.
Quiet notes of creaminess, café latte, milk chocolate, red pepper, malt, and nuts permeate the start.

The tip of my tongue tingles from the red pepper. Nothing else on my body has tingled for a very long time.

The glint of the first half inch is its balance and smoothness. My gut tells me this is a premium blend. No whiny epithets will spill from my mouth today…oh fuck.

The delicate flavor points are draped in a lush creaminess.
A sip of water and flavors gush like a teenage boy asking a girl to the prom.

I’ve had this cigar marinating nekkid in my humidor for nearly 3 months. I tried one a month in and I tasted nothing of what I describe here and now. A few more months will make significant improvements.

The P.R. says watch out…full strength cigar coming your way. And as this is Warped’s first high-powered blend, I can’t wait to see what kind of shriveled mess I become in the last 2”.

Very slow smoke. I like it. And it’s only $11, not $17. The $11 range has become the norm for most decent smokes on the market. It is also the range for some real dog turds. The Nicotina spits on the graves of those that charge $11 for an experience akin to being hit by shit from a chimp at the zoo. I saw that happen years ago when a 10-year-old boy was taunting the animals. The chimp let loose with a Sandy Koufax fast ball and the kid got it square in the face. The kid jumped back in shock. While everyone was sympathetic and caring, I laughed my head off. I got some angry stares. There is an old saying: “Fuck with the monkey and the monkey fucks back.” I learned that saying as a kid in Bar Mitzvah school.

Flavors dart. They intertwine. A constant dance that keeps my interest. But also presents the objective of the blend…a well-rounded blend whose emphasis is on the whole experience; instead of overwhelming you with the flavor wheel.

Warped is pretty consistent in excellence. This blend is something new for the brand and, so far, it is impressive.

1-1/2” burned and it begins to settle into its comfort zone.

Who gets to hide the afikoman tomorrow night?

Strength hits medium/full. One side of my face begins to droop. I love a cigar that can give you a stroke.

This will be a 90-minute smoke. Good deal for the dough.

Many thanks to the readers that have contacted me while I’ve been down and out in Beverly Hills.

Surprisingly, the spiciness is mild and its identity changes like a carousel speeding up.

There was this guy in junior high that was a nasty bully. Loved to put his fist into your diaphragm and then watch you writhe in agony as you tried to breathe. A total waste of skin. Karma stepped in. While in 9th grade, he and his friends went to Disneyland, and he bragged he could stand up in the Matterhorn bobsled. He did so as it came out of the interior of the ride and his head hit the head of the opening forcing him to fly like Tinkerbell and fall a couple dozen feet to the ground. D.O.A. His chick friends went around during lunchtime at school with an empty coffee can asking for donations for funeral flowers. No one put a dime into that thing.

The strength is contained and controlled. A balanced smooth stick that allows you to find solace in the cosmos.

Notes: Creaminess, caramel, malt, chocolate, espresso, red and black peppers, and all the savory qualities it has to give. Despite the sweet things described, the cigar is 75% savory and 25% sweet. I’d like to see the balance start swinging to a better division of equality.

Transitions are on the down low. So, the finish does all the work. My mouth is full of tidbits that stay put.

During my senior year (1967) in high school, I played with other musicians not in my band Three juniors that I’m sure left school to become gangsters were offered the opportunity to play every period for the girl’s gym period. No classes for Philly. I said yes to playing bass. Before we started, the guys told me they were all high on LSD. I saw the nightmare coming.

The first period of our performance was much akin to a Chucky Cheese animatronic show. They kept forgetting where they were in the songs. Had to stop a couple times and start again…I was dying.

The second period…it got worse. And in the middle of another botched song, the lead singer told all the teachers and the large group of girls: “Sorry. But we are high on acid.”

During our next break, the teachers kept an eye on us while we stood outside. As third period began, we were told our services were no longer needed. And for us to go home.
I never saw those guys again.
If that had happened a couple decades later, I would still be in prison.

The role of the complex nature, blended beautifully, is to never stop moving forward.
The cigar is thick with character.

Despite the blend’s name, Nicotina, I detect only a touch of nicotine. My vision is spot on. That is the definition of smooth.

A friend just transitioned. He was given the first fake penis in transition history. They used the schlong from a pig. Now he is a human corkscrew, and as I was told, became the spinner every time he has sex.

The Nicotina is a nicely blended snausage. Aimed more for the sophisticated palate. This is a manly cigar.
Full strength kicks in. It does so with a gentle kick of the lemming off the cliff.

Kyle Gellis truly came through with something different than the rest of his catalog. He made the right move.
The cigar ends at nearly 1 hour 45 minutes.
The cigar can be bought from Atlantic Cigar or Small Batch Cigar.

‹ My 1960’s Playlist Pt.7 | Katman
Release of the Cigars for Warriors 10th Anniversary Nubber | Cigar Reviews by the Katman ›